On Tuesday 12 October, we have our Modern and Contemporary Art auction. Covering works from across the 20th century and into the 21st, a highlight from the auction is this beautiful oil on canvas, by British artist Peter Coker (1926-2004), titled Salmon nets, Bardentarbat. Here Jennie Fisher, Head of Modern and Contemporary Art, gives us some insight into the work and the artist.

Peter Coker was born in London in 1926.  He studied at the Royal College of Art alongside contemporaries John Bratby and Edward Middleditch and whilst some of his very early work relates to the ‘Kitchen Sink School’ of art, Coker was soon drawn to the enduring tradition of landscape painting. On a visit to Paris in 1950, he was impressed by the work of Gustave Courbet and so began his relationship with that country, first in the north along the coasts of Normandy and Brittany and later to the south in Provence. 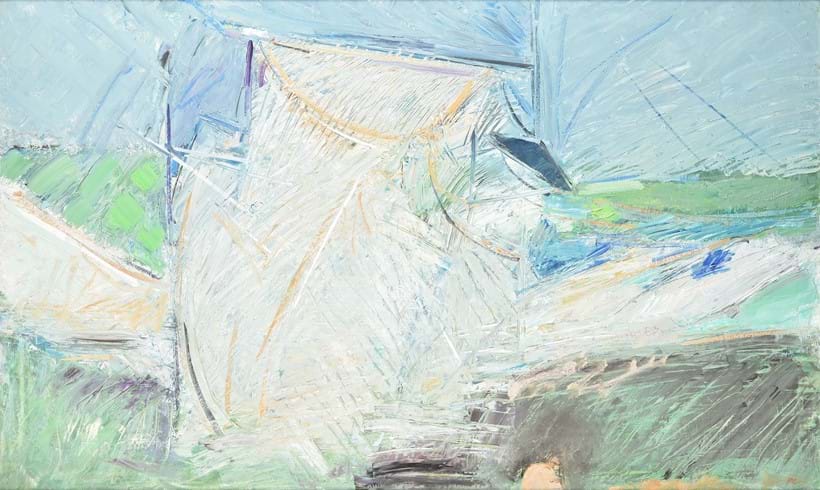 In contrast to his earlier Mediterranean views, in the mid-1980s Coker turned his attention to the more northerly landscape of Scotland. Visiting initially in 1985 shortly following the sudden death of his son, Coker threw himself into exploring the landscape and the work that he produced is frequently considered among his best.

In 1987, on his third visit, Coker encountered fishermen drying and mending their salmon nets and this theme became central to his body of work. The manner in which these nets were draped and hung divided and bisected the view in a way that he had not seen before and provided a new framework in which to envisage the landscape. The resulting works range from the entirely realistic to boldly abstract depictions to all manner in-between.

In his book on the artist, David Wootton describes the present work as "unrestrained expressionism" (David Wootton, Peter Coker RA, London, 2002, p. 103). The common theme of all the works from this series is the juxtaposition of the upright poles against the curve of the ropes and the cross-hatching of the nets. The artist also never loses sight of the sense of place - the spirit of these remote settlements and the wildness of the scenery.

Following on from his first solo exhibition with Zwemmer Gallery in London in 1956, Coker went on to exhibit with Thackeray Gallery, London in the 1970s. There was a major retrospective of his work at Chris Beetles Gallery in London shortly before his death in 2004. His work is also represented in numerous public collections including the Tate Gallery and Museums Sheffield.