Aynhoe Park is a magical place, a Grade I listed Palladian mansion overlooking a sweeping Capability Brown landscape, where an inescapable feeling of history is fused with playfulness in a unique style. 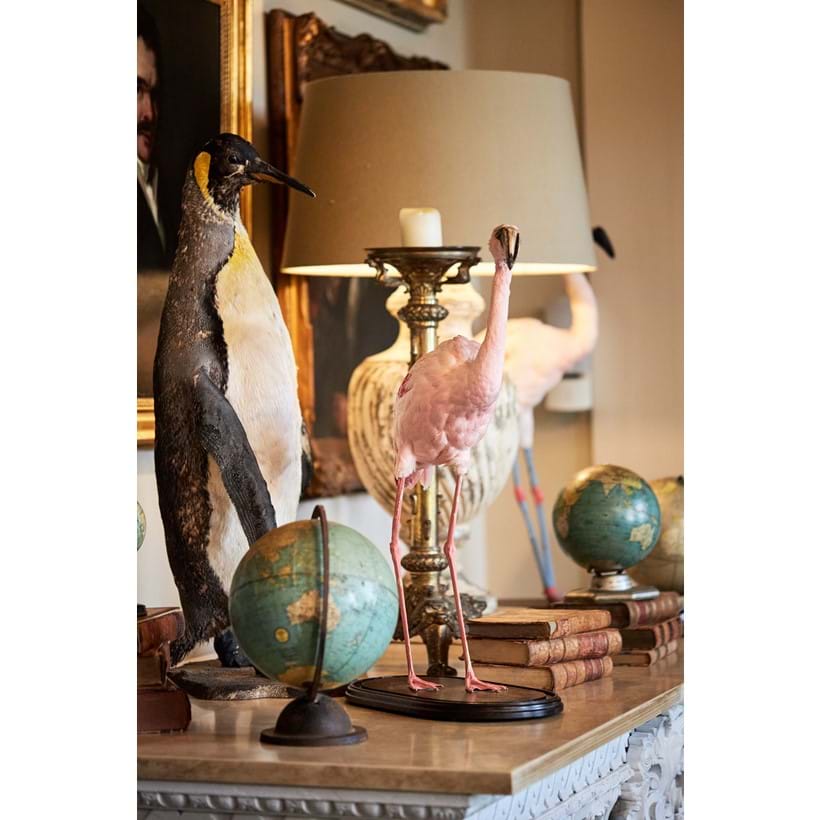 Here in this historical wonderland, flying giraffes, cabinets of curiosity, flamingos, classical columns, circus lights, antiques and contemporary art harmoniously unite to create an enchanting environment which has left a lasting impression on visitors from the world over.

The original Aynhoe house was something so far removed from what we see today. Originally built in 1615 for John Cartwright to Jacobean specifications the house was all but destroyed during the English Civil War by Royalist troops following the Battle of Naseby in 1645.

It was rebuilt to the design of Edward Marshall, master mason in Charles II’s Office of Works, but then drastically remodelled and enlarged by eminent Baroque architect Thomas Archer in 1707 for Thomas Cartwright. The garden façade, dramatic forecourt (where Henry Brudenell-Bruce’s iconic contemporary sculpture "Erratic" is now centre stage) and the East and West wing are the lasting testament to his work. The gardens were laid out by Mr Guilliam from 1701-14, and the park by Capability Brown from 1760-63. 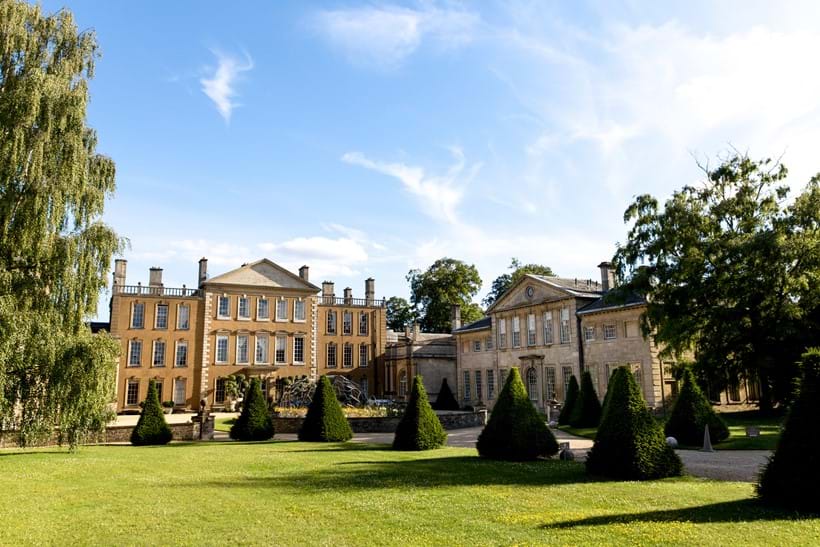 In the early 19th century, William Ralph Cartwright commissioned Sir John Soane to once again remodel Aynhoe’s interiors. The Orangery, Library and Entrance Hall and the West staircase and lantern are but a few of the markers of Soane’s genius in proportion and detailing. The estate was to remain the seat of the Cartwright family until 1959 when the house was sold and its interiors were unceremoniously and unsympathetically divided into apartments, with endless walls partitioning once elegantly proportioned rooms and sweeping corridors.

But in 2004 a glorious new chapter in Aynhoe Park’s history began when the entrepreneur and collector James Perkins bought the house following the dissolution of the Country Houses Association. Once again the house became alive as James, and his wife Sophie, energetically undertook the monumental challenge of restoring Aynhoe to its former glory, always remaining true to the creative vision of Archer and Soane whilst introducing a bold but sympathetic sensibility of their own. 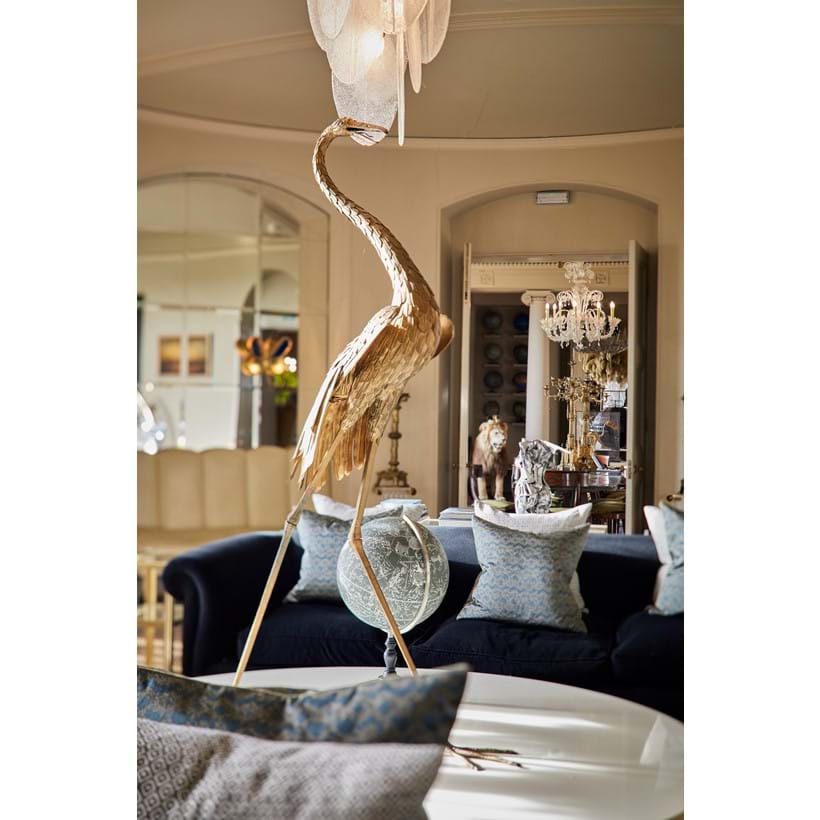 Although James first made his name as a record producer and leading light of the rave scene with his business Fantazia, holding many of the seminal raves of the 90’s and producing a string of successful dance albums, he is perhaps less known as an award-winning restorer of historic buildings.

James fell in love with Aynhoe Park. The fabric of the building had cosmetic scars to show for its decades of corporate life but as James and his team set to work restoring, Soane’s grand and perfectly proportioned interiors slowly re-emerged behind stud work wall, fitted carpeting and layers of paint.

Aynhoe provides the perfect backdrop from James’ enigmatic sense for the theatrical and by his own admission he is an obsessive collector and an avid buyer of the extraordinary and the whimsical. 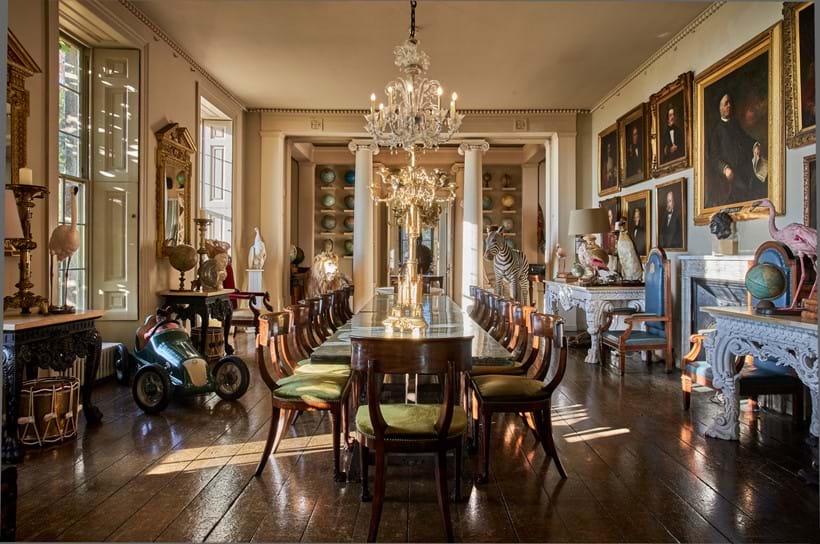 His passion for collecting and architecture began at childhood when at fifteen years old, he accompanied his mother to a restorer’s workshop in Cheltenham where he gazed upon a newly cast bust of Apollo being drawn from its mould. From that moment his life as a collector was confirmed; saving up the money from his paper round for months to enable him to purchase the bust and inaugurate a collection which now spans more than 35 years and includes nearly 4,500 pieces. James’ method of collecting over the years has been somewhat unorthodox, approaching illustrious institutions such as the Metropolitan Museum of Art in New York and the Victoria and Albert Museum in London and touring barely visited storage spaces to then make offers.

The cast collection at Aynhoe is recognised as being one of the most significant cast collections in private hands, attracting the attention of many noted scholars such as Dr Eckart Marchand. A portion of this collection is offered throughout this catalogue, particularly one of its most iconic components, The Porch of the Maidens, from the Erechteion) (Lot 323). 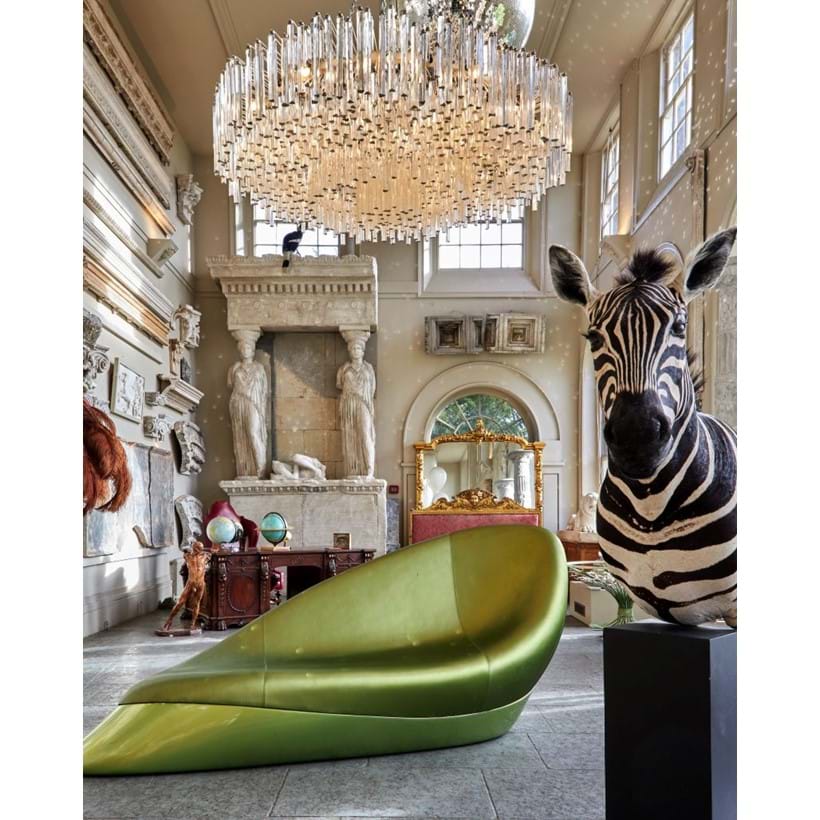 But those fortunate to have visited Aynhoe in its current guise will best recall its sense of theatre, creativity, and the seamless blend of the ancient, the modern and the downright quirky. By placing no limits on his collecting odyssey, James has skilfully amassed the multidimensional archive of objects and images that come together to elicit the world of Aynhoe. As you tour through the enfilade of rooms, you are also taken on a cultural safari reminiscent of the Grand Tours of the 18th and 19th centuries. Where else would you see design furniture by Jacques Duval-Brasseur or a large portrait of Kate Moss by Rankin (Lot 561) juxtaposed with old masters within a classical country house space? The immersive vision of objects from far flung corners of the globe with the most contemporary of works is a clever interpretation of a modern grand tour. This can be most clearly seen in the great Soane library where the Battersea Desk (Lot 151), by Naomi Tsai, Kai Wertel, Daniel Zielinski and Maximilian Zielinskiit sits harmoniously with thousands of leather-bound books and impressive pieces of taxidermy. Similarly the 1:2 scale model of an Aston Martin DBR1 ‘Airfix tribute kit (Lot 175) is an installation commissioned by James, which plays on the concept of pictures hanging on a bookcase - this is something which always captures the eyes and leaves guests in amazement (and varying degrees of childish jealousy). 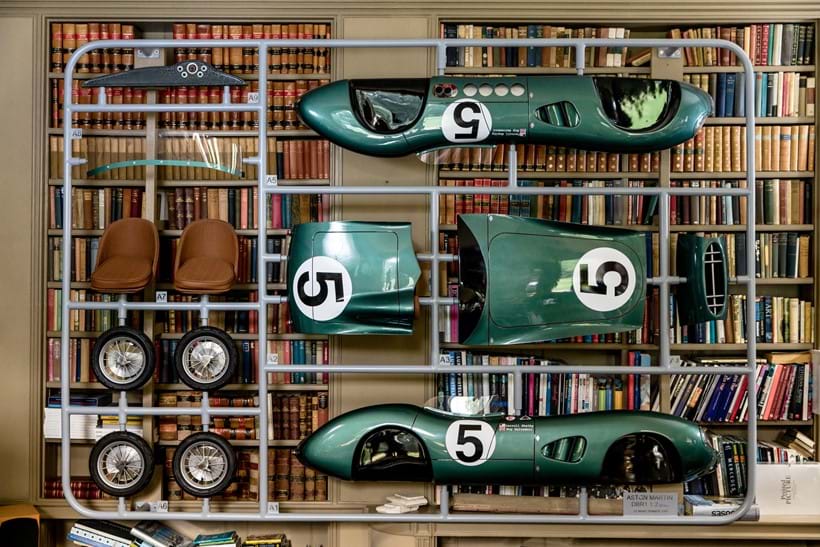 Stories told through the lens of seemingly disparate objects reach their apogee in the ‘ancestors’ portraits – the witty array of once unremarkable Victorian and earlier faces now embellished to create a cast of forebears from the explorer to the ventriloquist. In fact this commission gives a clue to James’ and Sophie’s creative spirit. They are passionate about fostering the talents of young photographers and artists and Aynhoe Park has played host to many works helping them raise their profile.

This creative spirit has also led James to become a well-regarded and successful designer and artist in his own right. Among the highlights in the sale are conceptual works created by James drawing on the environment he and Sophie have built at Aynhoe Park. Many of his creations have become the best-known and coveted symbols of Aynhoe and collectors items in their own right. Many are now included in the sale including an original The Aynhoe Moon Painting influenced by the clear nights at Aynhoe (Lot 403), the famous, ‘flying giraffe’ from the Orangery (Lot 320) and the giant bird’s nest with the golden egg (Lot 168). 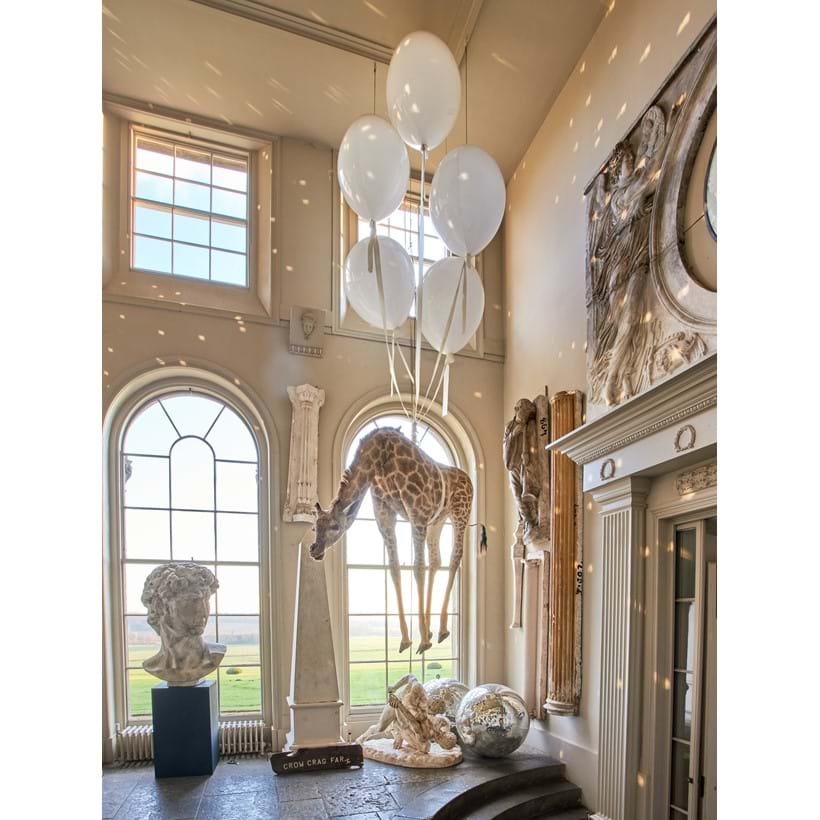 As Aynhoe evolved, James and Sophie also built the taste-making interior brand AModernGrandTour.com. An online resource for the unusual and a place that the couple could showcase their interior furniture and lighting designs. From decorative ornaments to oversized furniture; mustard armchairs, or mansion sofas. The site has a list of acclaimed interior decorator and celebrity fans across the world. The team's famous feather lamp has been featured in TV shows, fashion campaigns AND Hollywood blockbusters. One-off examples of the feather floor lamp, (Lots 64, 254, 350) feature in this sale.

We must not forget that homes such as these traditionally were places of grand entertainment and lavish spectacle and throughout its history, Aynhoe Park has received famous visitors from Charles I to Winston Churchill.

It is in the role as host that both James and Sophie have most enjoyed, sharing their home and the collection with a wide but exclusive audience. Aynhoe re-reincarnated has become a temple of entertainment, and celebration for royalty, dignitaries, musicians, and fashionistas of the modern day. Known and loved around the world Aynhoe Park was recently awarded the global accolade of ‘Best Venue’. 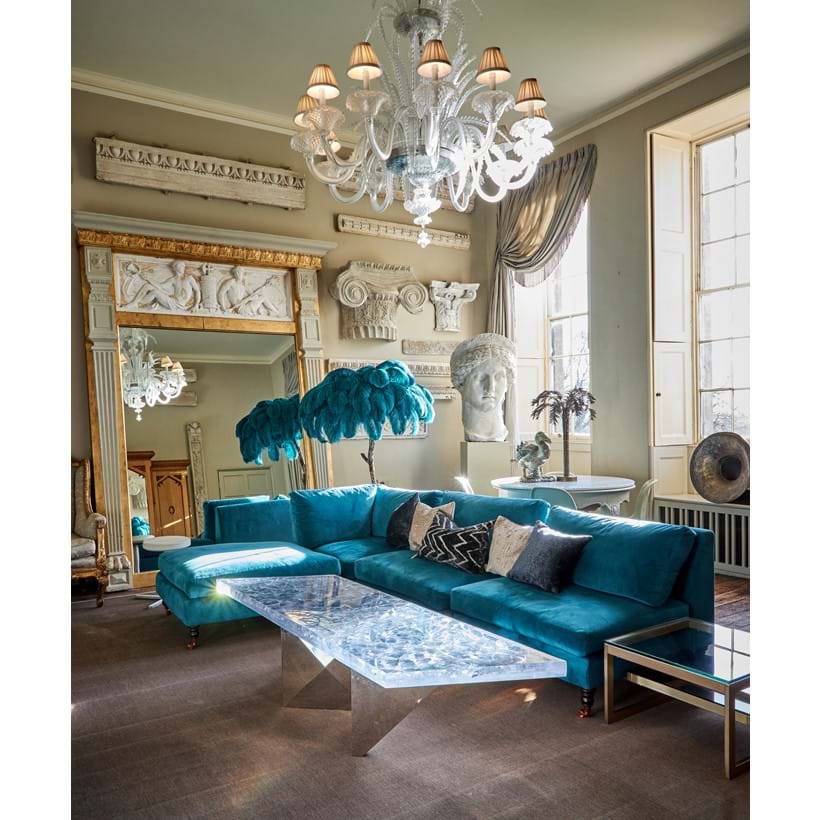 When looking back at the last fifteen years, many people will hold their own memory of Aynhoe, each unique, but the legacy will continue. James and Sophie have been responsible for combining the demand of 21st Century living with an architectural integrity, embracing a 400 year old country house, to entertain, and excite and importantly secure a future for this and other country houses. 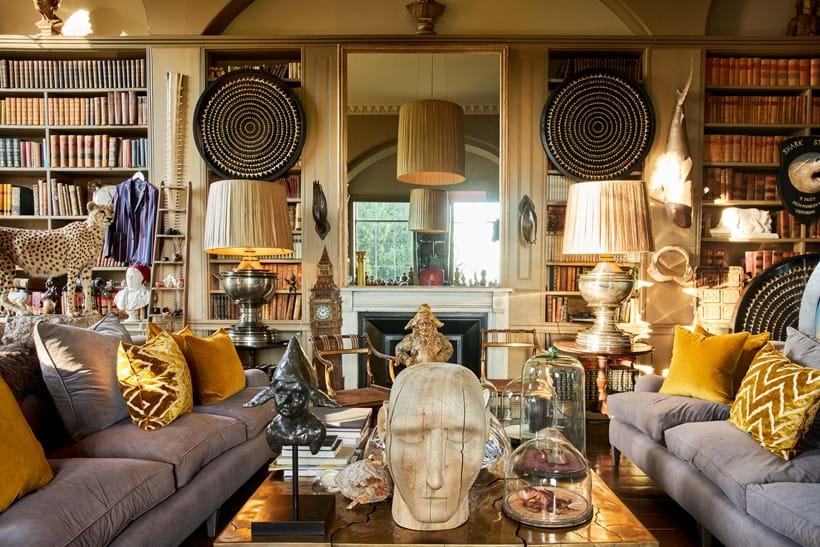 This enduring vision is something James and Sophie take with them and their family as they begin their new chapter at their next project, Parnham Park, Dorset.