In our forthcoming Modern and Contemporary Art auction on 18 March, Dreweatts are delighted to be offering a significant group of paintings by British artist Edward Seago (Lots 106-115). Ahead of the auction, Joint Head of Dreweatts Picture department, Brandon Lindberg tells us more about the works.

Edward Seago was one of the most popular English landscape painters of the 20th Century. He was born and lived in Norfolk throughout his life and the influence of the greatest artists of East Anglia, from the 17th Century Dutch-inspired Norwich School, to John Constable and Sir Alfred Munnings can be seen in his work. His light-filled landscapes, many with vast skies and billowing clouds are imbued with what one critic has described as 'an understated emotional language'. The ten works included in our sale span the breadth of his long and very successful career and show his evolution as an artist from rural equestrian scenes to his travels further afield across Europe and Hong Kong, which went on to become some of his most celebrated and popular subjects.

Seago was largely self-taught and was influenced and mentored by leading landscape painters of the day such as Alfred East and Bertram Priestman who advised him not 'to be unduly governed by what you see in art, but by what you see in nature'. His work gained wide popular appeal and his sell out exhibitions had queues around the block on opening day, but generally art critics saw him 'merely recording his visual impressions' and struggled to place his work in the context of modernism and the growing interest in abstraction. He never became an Academician at the Royal Academy, but nonetheless he was a firm favourite with three generations of the Royal Family and in 1956 he was invited by Prince Philip to join him on a trip to the Antarctic aboard The Royal Yacht Britannia. Seago was also a prolific writer and published eleven books, including several with poems and prose by the Poet Laurette John Masefield. He was equally at home in the company of the aristocracy or country folk and his work enjoys broad popularity to this day with numerous collectors around the world. 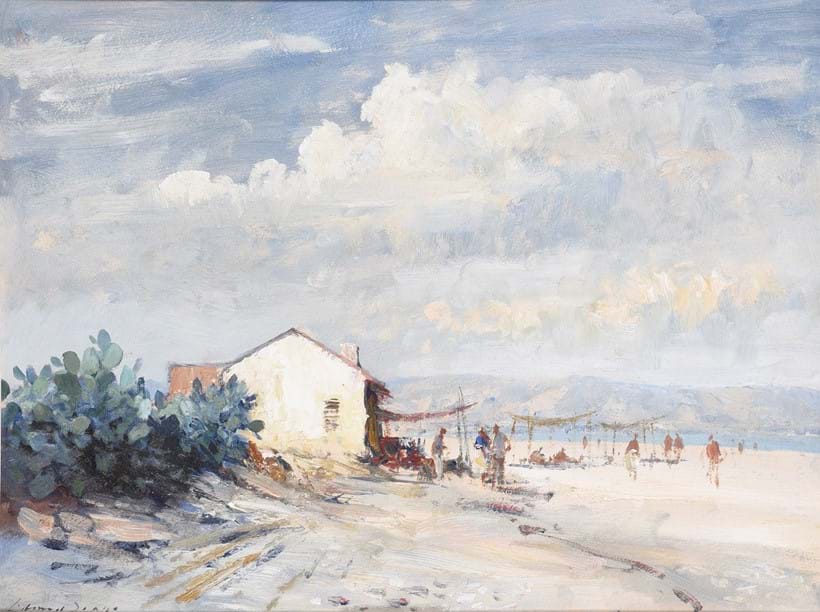 Like many artists of the period, such as Dame Laura Knight and Augustus John, Seago was attracted to Gypsies and their bohemian nomadic life and brightly coloured clothes and caravans. In the late 1920’s when gypsies set up camp near his family home in Brooke, outside Norwich, they became the subject of a series of drawings and he included several oils in his first solo exhibition in 1929. 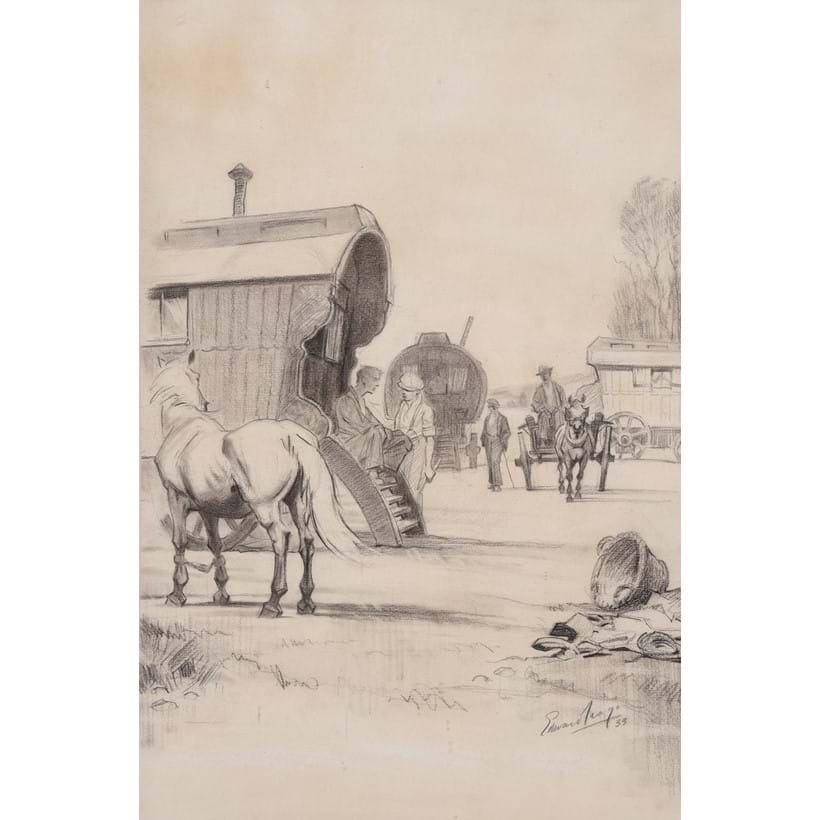 Horses in a Norfolk Landscape

Horses in a Norfolk landscape was painted in 1928 when the artist was 18, the same year his great early mentor Sir Alfred Munnings held his landmark exhibition at Norwich Castle. It drew large crowds and gave the young Seago an opportunity to study his works at first hand. Munnings influence is clearly see in this work which harks back to his Ringland Hills pictures painted on the outskirts of Norwich in the years before the First World War. 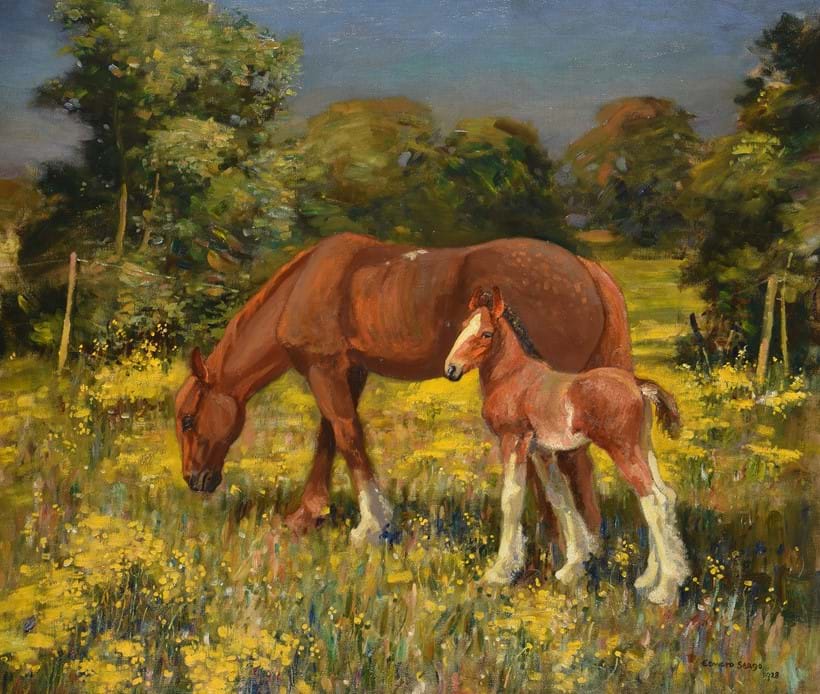 First on the Tide

As Seago’s style matured and he searched for his own unique voice, coastal landscapes at low tide became an increasingly popular motif in his work. It gave him the opportunity to explore the fleeting effects of reflected light as the tide ebbed and flowed and light bounced off the saturated sand and mud. 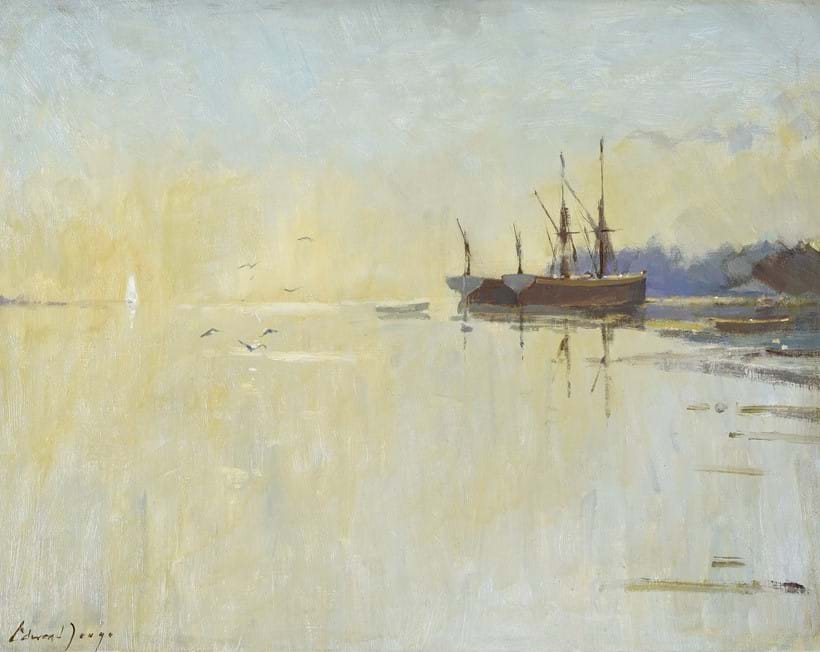 In many ways Landscape at Martham, Norfolk is the quintessential Seago. The majestic cloudscape, forms a canopy over the extensive landscape and the large tree in the foreground leads the eye to the sunlit pantile roofs of the cottages in the middle distance. 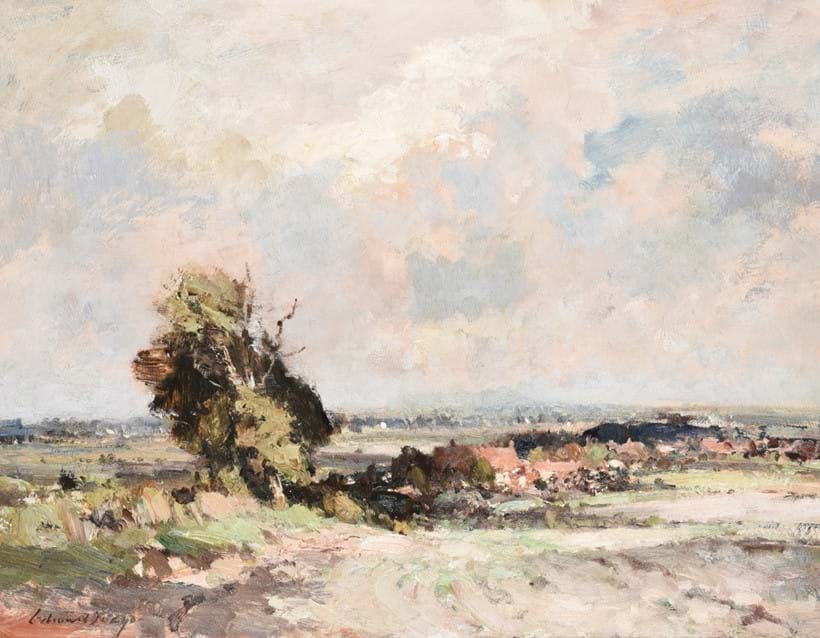 A panoramic view of Sorrento, Italy

After five years’ war service as a camouflage artist, the heart condition Seago had suffered with since childhood was discovered by the army medical corps and he was discharged. Complaining to his commanding officer and fellow painting companion, General Alexander, he was invited to join Alexander in Italy to paint what he liked and in doing so became an unofficial war artist with his own jeep and driver. With limited materials many of the works he produced were sepia wash works on paper, but, as in the present work, he also painted in oil. 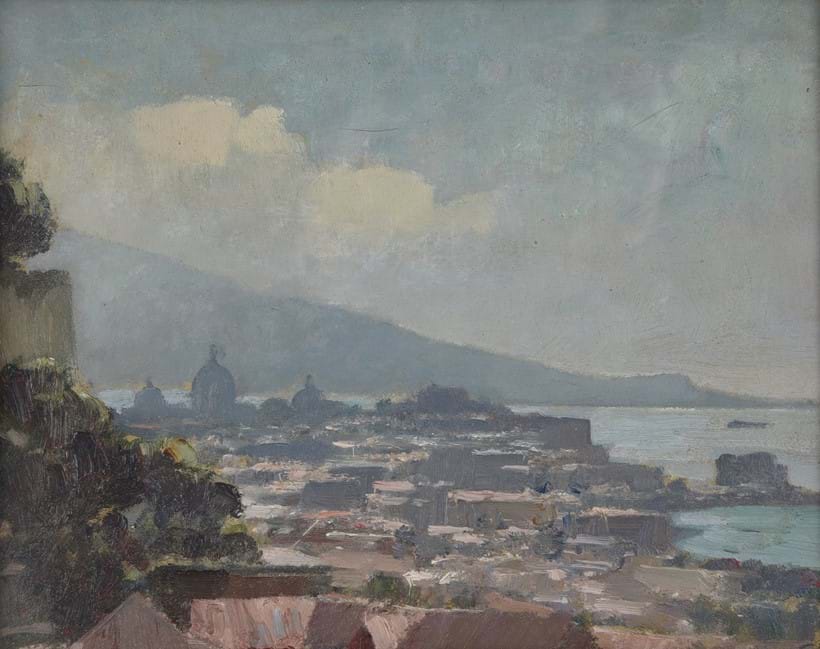 'Pageantry and music, palatial magnificence and the stench of squalor: gaiety, leisure, wealth and poverty - these things belong to Venice' Seago wrote in his diary. He first visited Venice in 1933 as the guest of an early patron, Henry Mond, Lord Melchett. The city of water and light captivated him and he returned there throughout his life, producing some of his most celebrated and memorable works. He explored the wider Venetian Lagoon, including Choggia, the town south of Venice, the subject of the present picture. 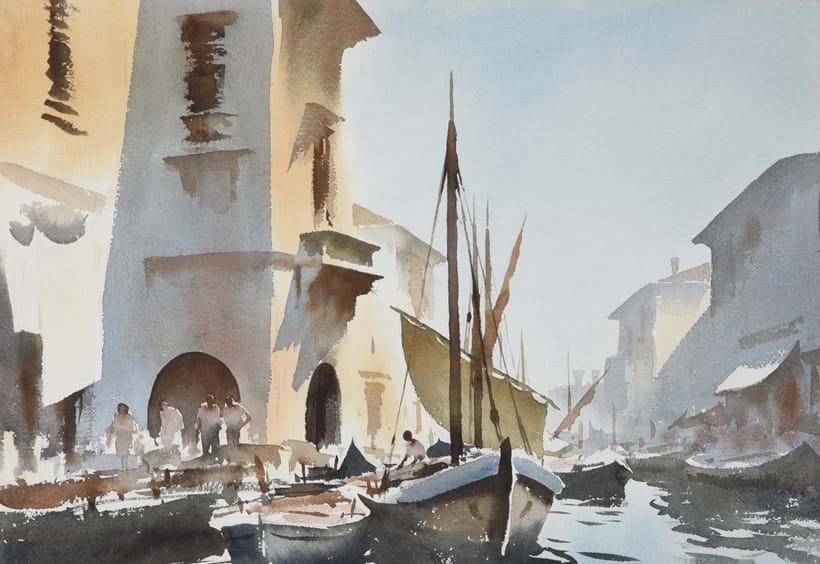 In 1962 Seago was invited to Hong Kong by John Swire to paint a series of pictures for the new boardroom of the eponymous multinational shipping company. Swire had collected Seago’s work for many years and felt the opportunity to come to Hong Kong would be in the tradition of the 19th Century topographical artist George Chinnery. Seago stayed for six weeks and produced eighty works. Many were painted in the tradition of his European pictures, depicting majestic coastal landscapes and maritime subjects, but the city street scenes he produced, such as the present work, were totally different. Using a palette knife for the first time he rapidly applied paint to capture the vibrant and chaotic everyday life of the central district of the city. 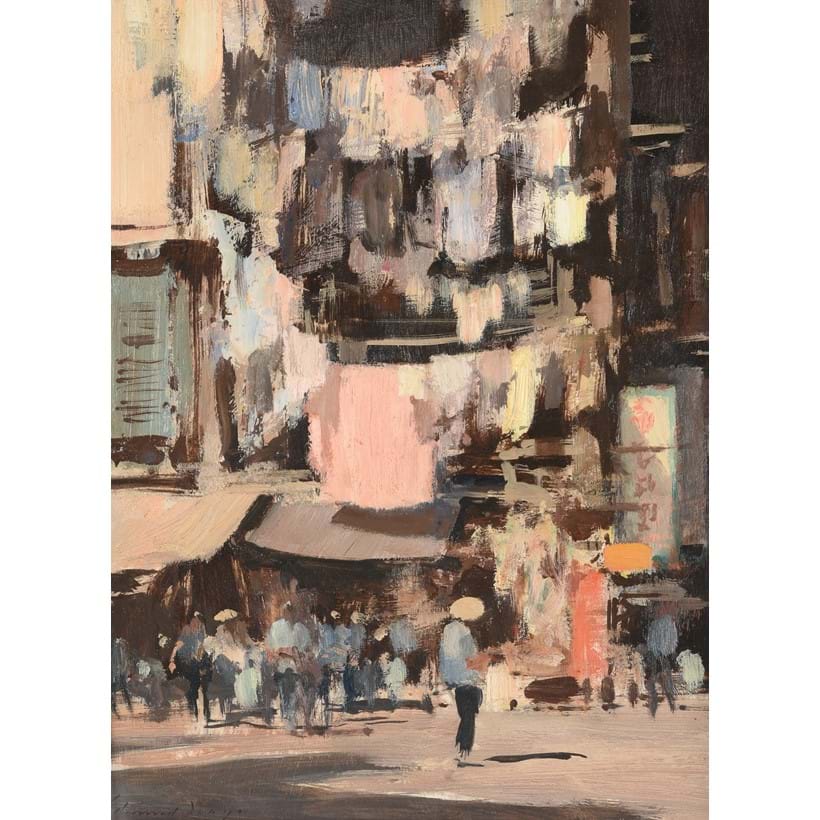 The Cutty Sark, a sketch

A countryman at heart, nonetheless Seago painted London on many occasions, but the river and shipping was never very far away and he painted the much-loved Clipper, The Cutty Sark, on several occasions in its dry dock at Greenwich. 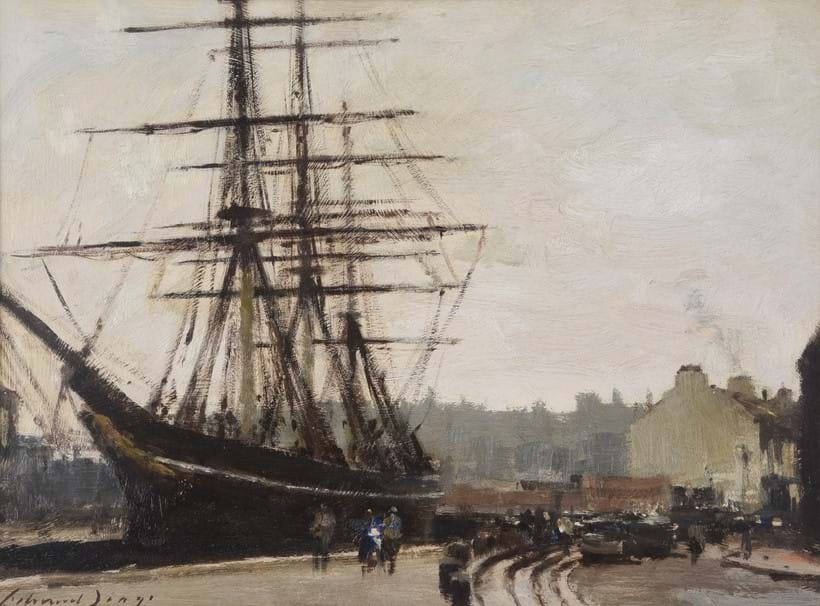 The Orwell at Pin Mill

Water had fascinated Seago since early childhood and it features in many of his pictures. The estuary of the River Orwell at Pin Mill in Suffolk was a particular favourite with it’s wide perspectives and distinctive Thames barges with their strong geometric forms and distinctive red sails. These flat-bottomed boats were highly manoeuvrable among the mudflats and in Seago’s day were still used to deliver building materials and farm supplies. 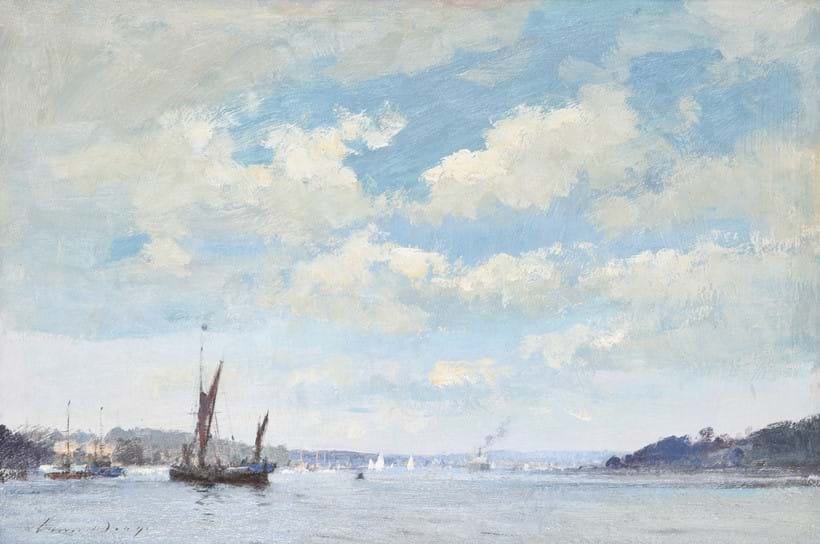