On Thursday 18 March we have our Modern and Contemporary Art auction. A highlight from the sale is Lot 37, an exceptional 1956 painting of Wittenham Clumps by Ivon Hitchens. It was acquired directly from the artist in 1957 and thence by descent to the present owner.

Synonymous for his panoramic depictions of the English countryside, Ivon Hitchens learnt his trade at the Royal Academy Schools before setting up a studio in north London in 1919. The subsequent two decades saw the evolution of Hitchens’ style from an accomplished but essentially traditional representational approach to a much more personal and emotive pictorial language. The influence of contemporary French painters such as Paul Cezanne, Georges Braque and Andre Lhote, as well as friendships with confirmed modernists like Claude Flight exposed Hitchens to new and exciting ways of seeing. An invitation to stay with Ben and Winifred Nicholson at their house in Cumberland in 1925 led to a productive exchange of ideas at a time when all three were at a critical juncture in their artistic development. The paintings that Hitchens completed during this time have often been seen as the first in which his personal style begins to manifest itself.

These years were, however, a financial struggle for Hitchens who, lacking any significant patronage, had to be content with only selling a handful of works each year. The one constant was his membership of the Seven and Five Society. With its first exhibition in 1920, the group was initially made up of a haphazard variety of artists, but Hitchens’ suggestion that Ben Nicholson join the group in 1925, galvanised it into a more single-minded movement with a nascent modernist aesthetic. Over the coming years the group attracted many of the most innovative artists of the period including Christopher Wood, David Jones, Frances Hodgkins and Barbara Hepworth; and Hitchens’ circle in north London grew to include further likeminded artists and intellectuals such as Henry Moore, Paul Nash, Adrian Stokes, David Bomberg, Walter Gropius and Herbert Read. 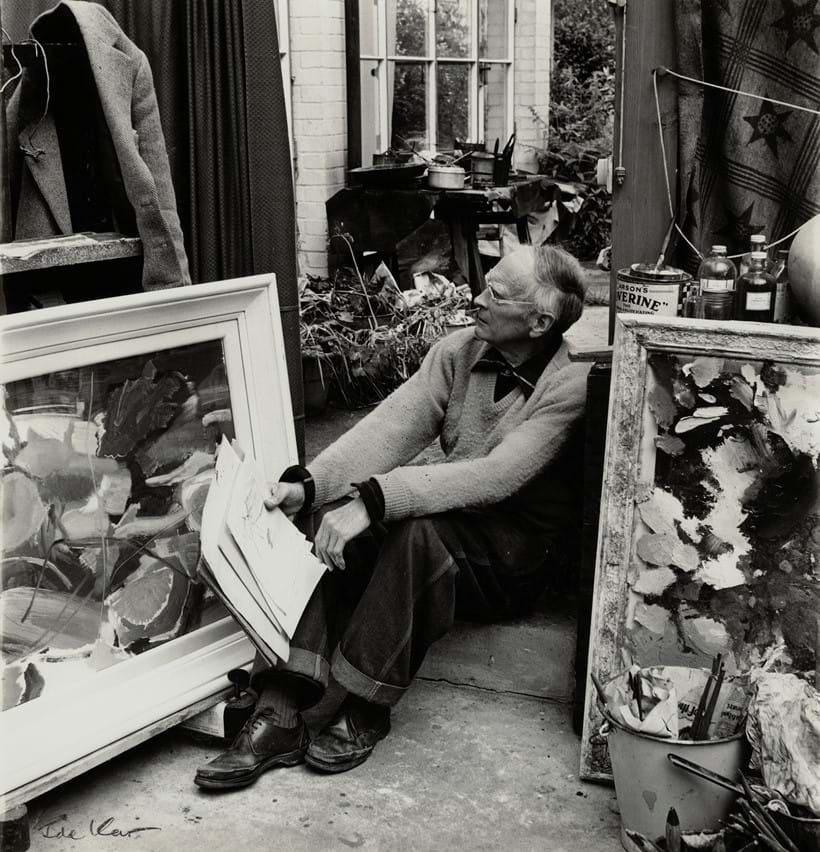 In spite of his close and enduring relationship with Ben Nicholson, as the 1930s wore on, their artistic styles began to take different paths. Nicholson’s preoccupation with line and the flattening of the pictorial plane were a pre-cursor to the uncluttered minimalism of his mature style. And yet whilst abstraction was integral to Hitchens work, his paintings always kept the physical object at their heart. As non-representational as they are, Hitchens landscapes are a careful balance between what is seen and the artistic demands of form and pattern.

In 1940, the Hitchens family which now consisted of his wife Mollie whom he had married in 1935 and their young son, John, born in April of the same year, were forced to retreat from London after his Hampstead studio and home was bombed. The couple had been spending increasing time in Sussex and the previous year had acquired an area of woodland near Lavington Common, along with a large caravan purchased from a Miss Williams of Heyshott for £20. This move to Sussex transformed Hitchens’ painting and he spent the next forty years depicting the surrounding landscape.

"He seemed in no hurry, and curiously objective about his own work as though he were an outsider seeing it for the first time"

By the time of the present work, Wittenham Clumps from Days Lock, executed in 1956, Hitchens had established himself as one of the foremost painters of the day, with financial security from a now longstanding relationship with Leicester Galleries and critical acclaim from several museum exhibitions. In the same year, he was chosen to represent Britain at the XXVII Venice Biennale. Whilst his work had been exhibited abroad, the Biennale offered an unrivalled opportunity for twenty canvasses to be shown, showcasing his work to a much wider international audience. The works were well received and, following the show, the British Council was invited by several European galleries, including the Musée National d’Art Moderne in Paris and the Stedelijk Museum in Amsterdam, to send them on tour, garnering yet more exposure for Hitchens’ work.

Wittenham Clumps from Days Lock is a superb example of Hitchens’ use of colour to create form. The typical sage green interspersed with greys, whites and violets draw the viewer over the water to the landscape beyond. The intersecting lines of the foreground contrasting with the curve of the hills in the distance creating a sense of balance and harmony.

The work was acquired in 1957 as a wedding present directly from Hitchens’ studio and has remained in the same family ever since. The family have retained not only the original correspondence with Ivon Hitchens setting up the studio visit and subsequent purchase of the work but also a brilliant recollection of the visit by the original owner. These documents reveal him to be a solicitous and kindly man who was more than happy to devote the whole day to showing paintings to his prospectus buyers and discussing them at length. Although the letters deal mainly with the practicalities - including a hand drawn map of how to find the studio - they also reveal humour and sensitivity.

Hitchens first letter, dated January 25th 1957, worries “Hadn’t you better count your pennies after your honeymoon?”, before moving on to provide the following recommendation: “The train service is reasonably good from Victoria. But if you can save the petrol then the cross country drive is pretty”

The timing of the visit coincided with the opening of Hitchens’ exhibition at the Musée National d’Art Moderne in Paris and he remarks:

“...it’s odd how you can travel thousands of miles, do and see so much and find time for it all - while if one stays at home, things crowd in so thick and there is so much to attend to that I am usually behind with the delivery of paintings. Our Paris trip which did materialise in the end, leaves a hazy memory of floods of taxis (petrol rationing a myth), crowds of people, champagne adlib(?) and miles of stone floor galleries. The show looks well and everyone seemed pleased including the museum authorities who talk of buying one.”

The owner’s memoir reveals more about the visit and includes a great many insights into Hitchens’ working process.

“He seemed in no hurry, and curiously objective about his own work as though he were an outsider seeing it for the first time. Many canvasses were unfinished. He explained that he always knew what he was going to try to achieve but never how he was going to get there. He always started from nature (or from an interior or model). The first rendering was often relatively representational, the verticals and horizontals, light and shade, re-producing what was in front of him - up to a point.

Each succeeding state - and he sometimes did 6 or more - would be more abstract, until the final one might, if he were ‘lucky’ express something of what the original meant to him, though, to the viewer, it might seem to be totally ‘abstract’ unless he knew how it had evolved.”

It was only after some considerable time that they came close to making a decision on a painting and, remarkably, the day ended with them agreeing on not just one painting but two:

“We spent the whole afternoon, looking at and discussing painting after painting. Eventually the choice was narrowed to two; one I liked, one Hitchens liked and wanted us to have. The one I liked was not, Hitchens said, finished - or satisfactory. The one Hitchens preferred had just been completed - ‘Wood Landscape no. 2’, of 1956. He looked again at the one I preferred - ‘Day’s Lock, Wittenham Clumps’ - and agreed there was something missing on the right-hand side. Picking up a large brush dripping with a characteristic mixture of grey, light blue and purple, he swirled in a sort of arching rainbow against the deep blue of the sky on the right. “There”, he exclaimed, “That does it, I think”. I wanted the picture more than ever, but he still wanted us to have the other. We explained that we were broke and could not possibly afford both. After long discussion, “I’ll tell you what”, he said, “why don’t you take both - for the price of one”. And, despite our protests, that is what eventually happened.”