Thomas Furniss: My Father and his Collection | Space Exploration Photography and Ephemera, to include items from the Collection of the late Tim Furniss | 22 February 2022

Thomas Furniss: My Father and his Collection | Space Exploration Photography and Ephemera, to include items from the Collection of the late Tim Furniss | 22 February 2022

On 22 February 2022, Dreweatts will be holding its auction of Space Exploration Photography and Ephemera, to include items from the collection of the late Tim Furniss. Tim was Flight International magazine's spaceflight correspondent from 1984-2006. He was also a broadcaster, lecturer, theatrical presenter and the author of over 35 published books on space history.

As a lifelong space enthusiast, during his professional career Tim assembled an extensive collection of photographs depicting this extraordinary human effort to reach another world, selected contents of which we are honoured to offer to our clients. Here, Tim's son, Thomas Furniss, tells us more about his father's passion for space as well as his collection. 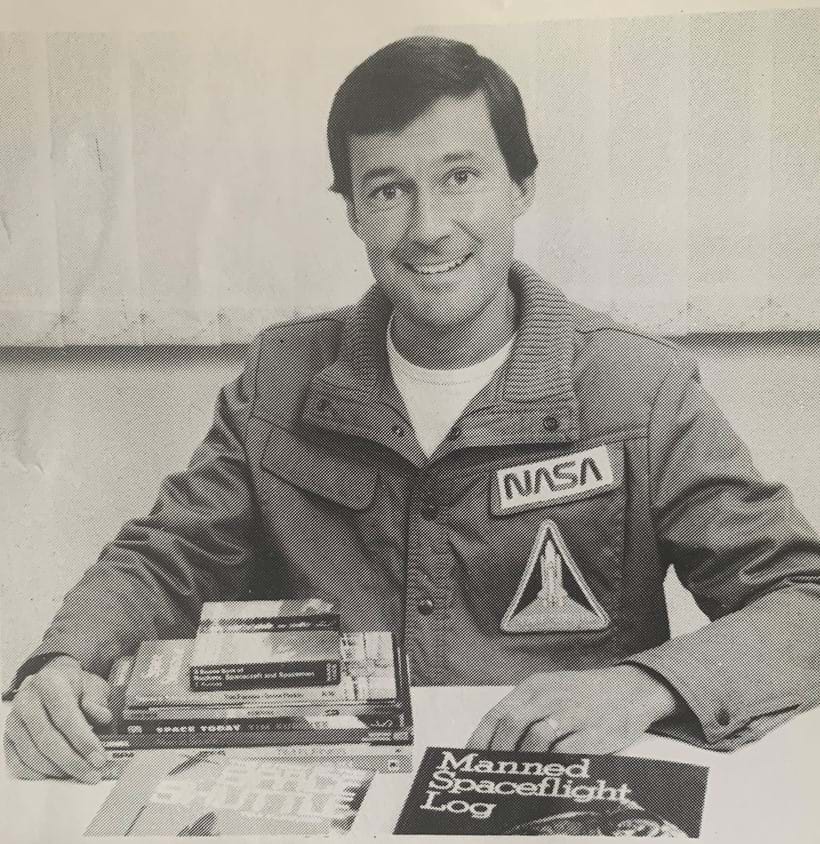 No one likes having regrets, but one of mine is not showing enough of an interest in my father’s profession and space in general whilst I was growing up. I think a huge part of that was due to the vast difference in the manner that space exploration is covered these days. One literally cannot go a day without seeing something in the news or on social media about it now and space is now one of the ‘fashionable’ genres we see in pop culture as well. Back in the 1980s when I was at school, I remember going into the library and of the very few books on space that were there, the lion’s share of them were written by my dad – a far cry to what we have available in all forms of media today.

In my humble opinion, though, perhaps the most significant and obvious reason for this are the leaps and bounds that humankind has made with advances in technology. Some of the biggest questions in life are: Where do we come from? Are we alone in the universe? and I think to some extent we are slowly beginning to answer these questions. From a personal perspective, not only do I think we are not the only intelligent life in the universe, I would speculate that there is someone else out there, millions of light years away writing the very same thing as I am right now! 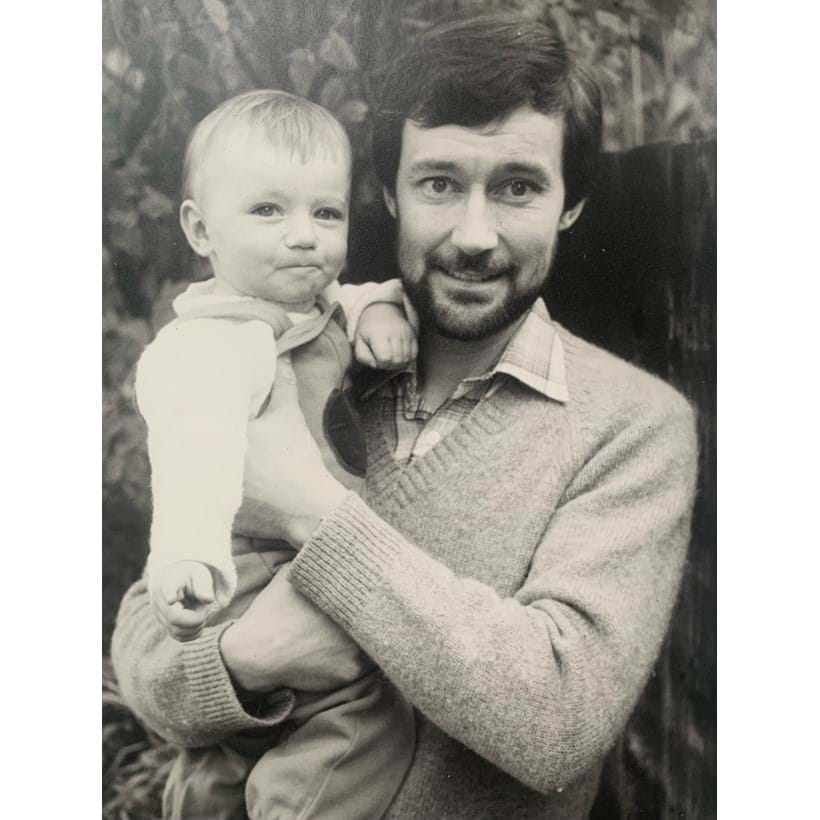 My father’s passion for space began in Epsom, Surrey in 1961 at the ripe old age of twelve when my wonderful grandma, Marnie Furniss, took him out to buy some lemon meringue pie. It was on this brief trip that he walked past a TV shop window and saw Yuri Gagarin on the news as he became the first man in space. It was from this moment onwards that he was hooked. In the years that followed, he began meticulously creating newspaper scrapbooks on anything relevant and would write to NASA on a weekly basis trying to get his hands on autographs and photographs. My sister, Katie, has a terrific letter from Alan Shepard (the first American to travel into space) dated 1964 and thanking my father for sending him a birthday card. One of many correspondences he accumulated over the years.

Heading into his late teenage years, my dad had founded the ‘Genesis Space Photo Library’ which my sister and I keep alive on a reduced capacity to this day. Some of the photographs he collected will be available in the auction this month. The image below features my father shortly after the successful Apollo 11 moon landing in 1969 with his first sets of folders in the background. The eagle-eyed viewers might spot Lot 13, where Chuck Yeager broke the sound barrier in the X-1 in 1947. 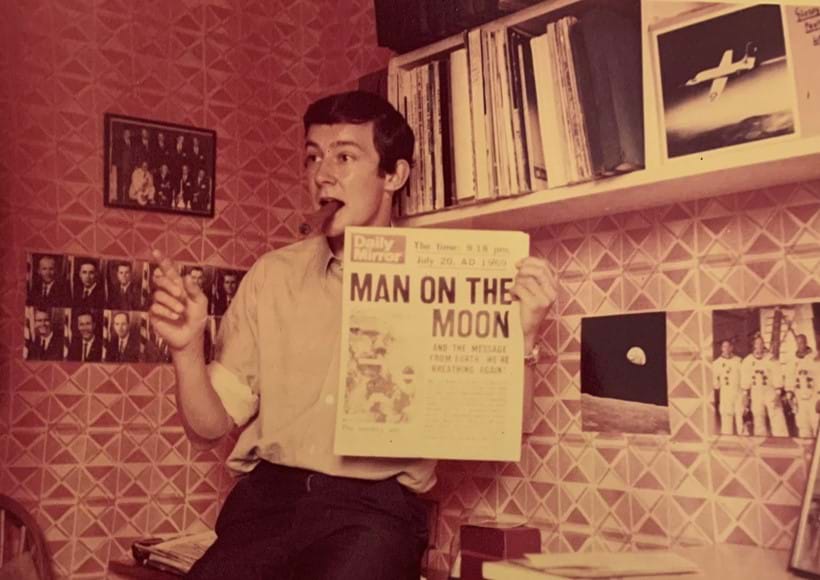 My father’s first steps into journalism also began around a similar time and he began to just write articles and send them out to various publications in hope that they would be picked up. Before long, he had his first assignment and from there everything just snowballed. One thing about my dad was that he was never afraid to take some risks and try his luck when it came to his early years working as a space journalist. This was trait that he carried with him for many years to come.

When he travelled to the US to cover the launch of Apollo 13 at age 22, he crawled through the legs of a hoard of journalists to take a series of pictures of the crew before transferring to the launch pad. My favourite of which features this brilliant shot of Fred Haise staring right into the camera, blissfully unaware of the drama about to face him on the mission. 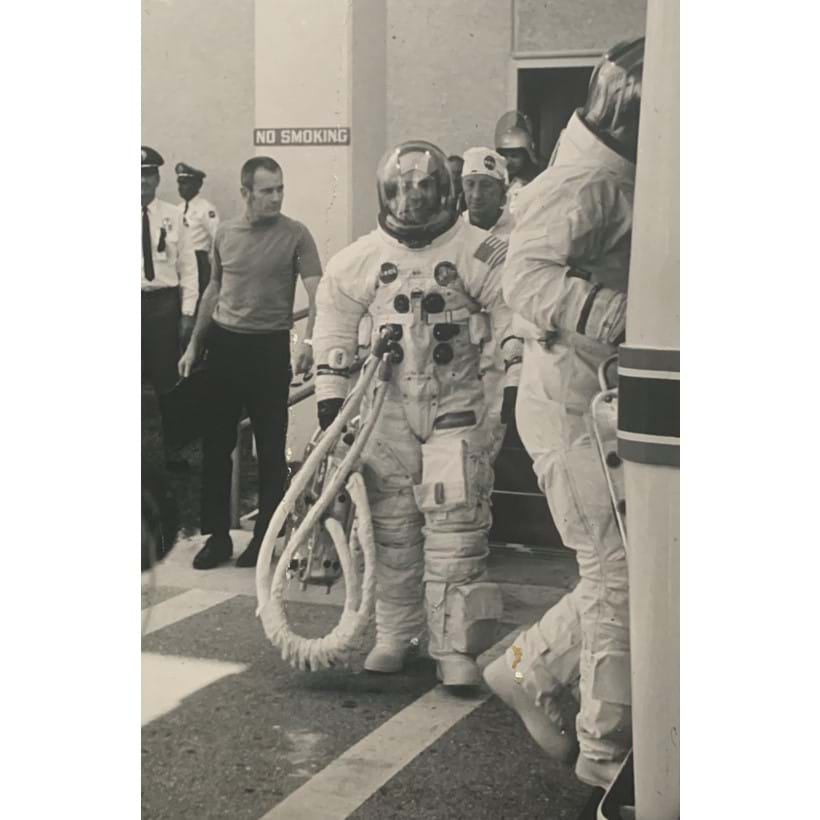 Not satisfied there, though, a few days later he decided to chance his arm once again and turned up at a sub-branch of NASA brandishing his journalist credentials, preceding to ask whether he could try on a space suit as demonstration. To his surprise he said, they just replied “Sure, come on in”. Can you honestly imagine something like that happening these days - you would be lucky to get in the car park! Upon his entry, he was shown around the main areas of the building before having his measurements taken. He was then paired with a suit and gloves that fit best, respectively being that of astronauts Bill Pogue and Frank Borman. 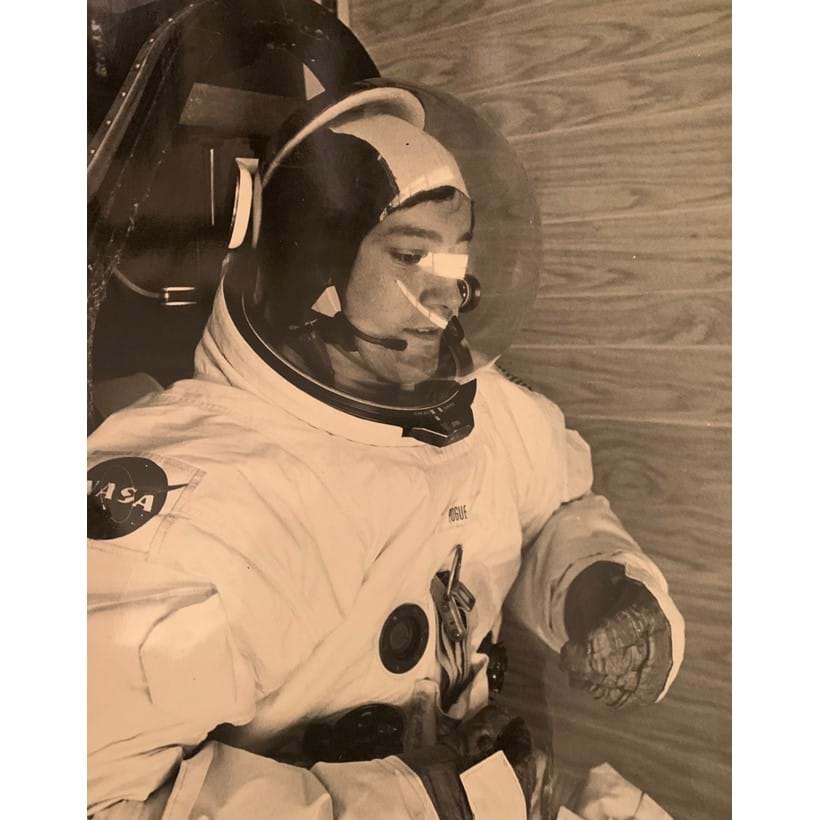 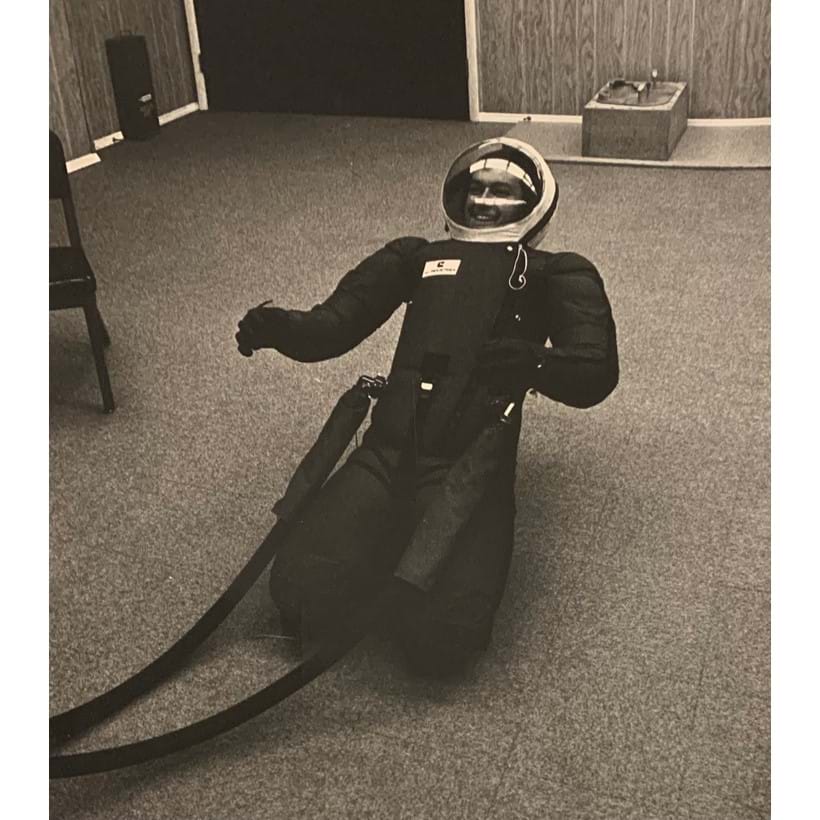 Upon leaving, my dad was given an ‘Apollo Operations Manual’ for the suit to help with his reporting - something he no doubt asked for - and this very item will be available at auction as Lot 166.

Lot 166: NASA Spacesuit "Familiarization and Operations Manual" prepared under contract No NAs 9-6100 for the use pertinent to Model A7L and intended for the use of all personnel engaged in Apollo suit activities | Est. £200-400 (+ fees)

Arguably, my favourite story over the years, though, actually took place in the UK as my father was researching his book for the 20 year anniversary of the moon landings; ‘One Small Step’. Once again, with the lack of email and the internet, he wrote letters to all of the Apollo astronauts asking various questions and opinions to help with his book.  Among the many replies he received from most of the astronauts, was a brilliantly detailed letter from Neil Armstrong. After finishing reading it several times he spotted that there was a phone number to Neil Armstrong’s company written at the top. My dad, well, being my dad, decided to call it up in the hope that he might get to have a chat with the great man. Upon doing so he was caught totally off-guard as the first words he heard on the other end of the line were “Hello, Neil Armstrong”. My dad then chewed Mr Armstrong’s ear off for the next 30 seconds thanking him for his help, to which his reply was... “You’re very welcome, Tim”.... Click, brrrrrrrrrrrrr. Classic Neil Armstrong. I could probably talk all day about various other anecdotes, but then I would be at risk of chewing your ear off as well. 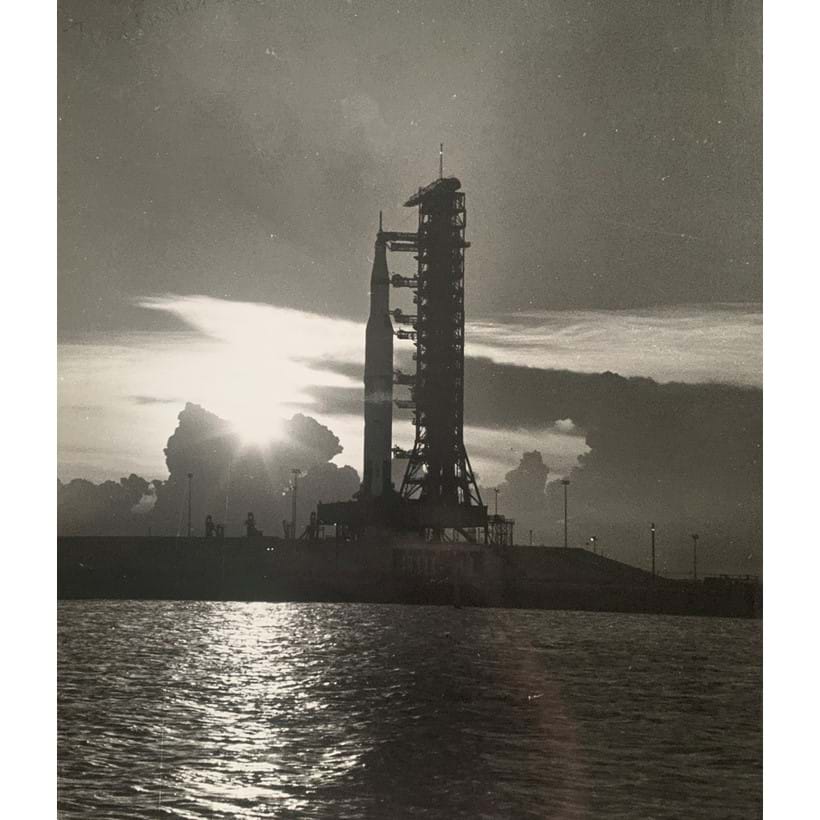 My father was diagnosed with vascular dementia and Alzheimer's disease in the mid 2000s. Whilst he soldiered-on with work for some time, it became clear to the close family and I that there was something was definitely afoot with his behaviour. After his official diagnosis, I remember having a slightly nonchalant response which was purely down to my own ignorance of the illness. The years that followed were particularly tough, especially for my sister and I who were the primary carers. Dementia is an awful disease and something I hope to never encounter again in my life in any capacity. It robs the family and friends of a loved one and the person in question of their dignity.

However, this terrible period in my life triggered the start of my very own passion in space. I’m sure the psychologists out there will say this is perhaps my way of trying to reconnect with my father, and I guess they are probably correct. Nevertheless, it did not take long for me to catch the same space bug that followed my dad all those years. It began with simply arranging folders of old NASA photos, books, scrapbooks etc... and before long, I was onto the plethora of documentaries available on all the streaming services, watching and re-watching every science fiction movie I could set my eyes on and I even began collecting my own NASA memorabilia. Perhaps the biggest step was reigniting my father’s ‘Genesis Space Photo Library’ and scanning all his old newspaper scrapbooks to create an online archive from the golden age of the space era - something that I’ve still yet to complete, such was the amount of material my father accumulated over the years. 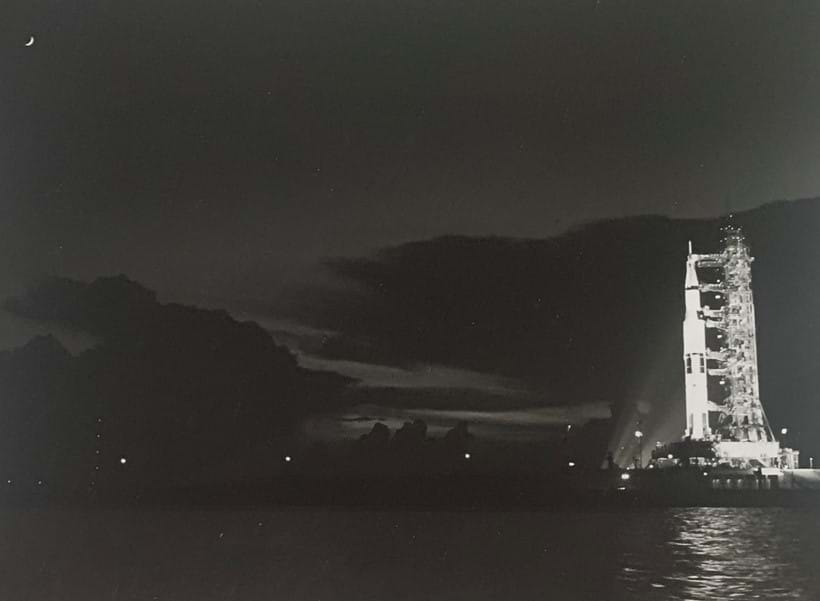