On 22 February we are delighted to hold a specialist sale of mesmerising space photography, related ephemera and autographs.

Over 1200 photographs, grouped into over 400 lots, sequentially unravel the story of human endeavours to discover what lies beyond our home planet, from early rocketry engineering by the forefathers of space exploration to complex interplanetary missions.

Amongst many “first” images from space, the sale also features intimate photographs from training activities, pre-launch preparations and dramatic recoveries. There is also a large group of photographs unreleased at the time by NASA and, thus, scarcely seen.

Although today space photography and video footage appear to be a part of our daily news feeds, it was only few decades ago that we had the chance to see what our planet looks like from space for the very first time. In those days space photography was a source of awe, wonder and amazement and had the power to change the way we see Earth and our place in space. The photography not only documented one of mankind’s greatest achievements, but through its aesthetic values, also had the power to show the sublime beauty of the universe and our own planet.

Here we take a look at some of the highlights.

Decision to travel to the Moon

On 12 September 1962, John F. Kennedy famously gave his "We choose to go to the Moon" speech at the Rice University. Here we have Lot 44, a vintage gelatin silver print capturing this moment in time. Affixed to the verso are Houston Chronicle stamps and notes as well as the press caption. 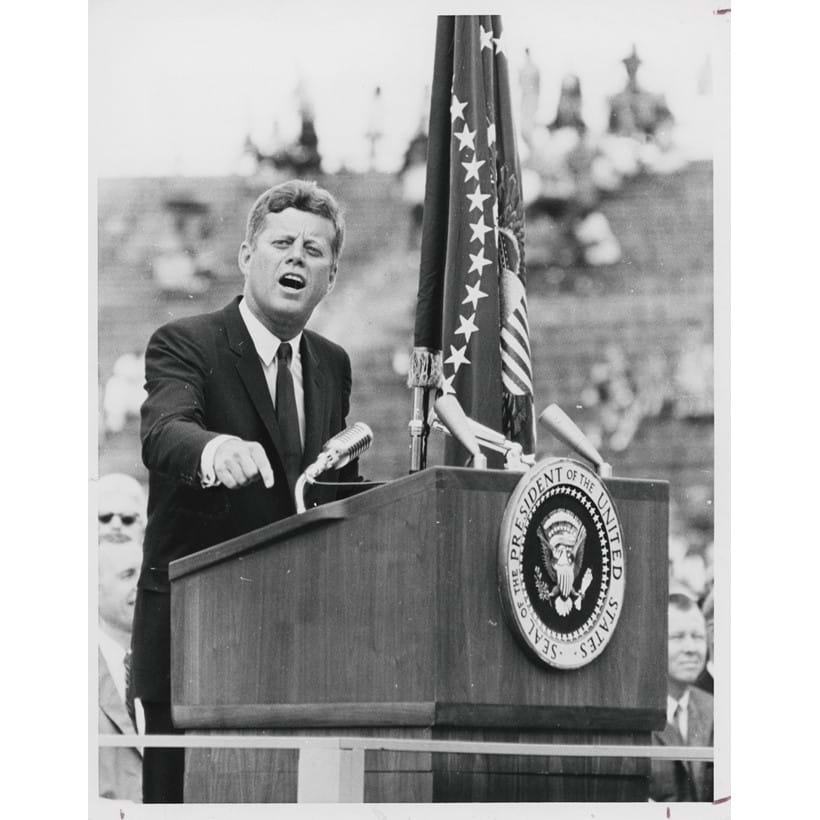 This iconic photograph of Ed White (Lot 57) depicts the first spacewalk performed by an American and is the first from a series of images documenting this historic moment. It is also the first photograph of a human in space taken by another human, captured by his partner James McDivitt. This was a thoroughly enjoyable experience for White as he remarked “I feel like a million dollars!” 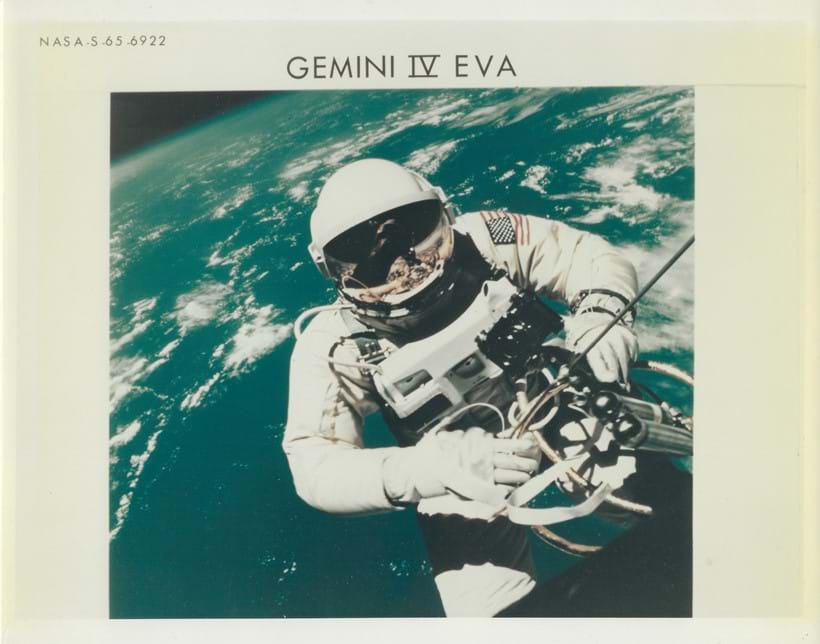 First journey to the Moon, Apollo 8

Apollo 8 was the first mission that took humans to another world. The photographs from the Apollo 8 mission were key in changing our perception of Earth’s place in the universe.

Taken in the politically turbulent year of 1968, they showed for the first time that Earth is only a small planet in a much greater cosmos. They showed its sublime beauty and fragility whilst underpinning the newly developing environmental movement.

“We came all this way to explore the moon, and the most important thing is that we discovered the Earth” ~ William Anders (Apollo 8)

The auction will feature Lot 141, the first human-taken photograph of the Earth from beyond its orbit. This photograph was taken by William Anders on 21 December 1968 at 13:06 GMT from an altitude of approximately 27,000 miles after the spacecraft left Earth’s orbit and headed for the Moon. Featured on the cover of Life Magazine on January 10, 1969, this image would become one of the 20th century's most famous photographs, inspiring people worldwide to consider Earth's place in the cosmos. 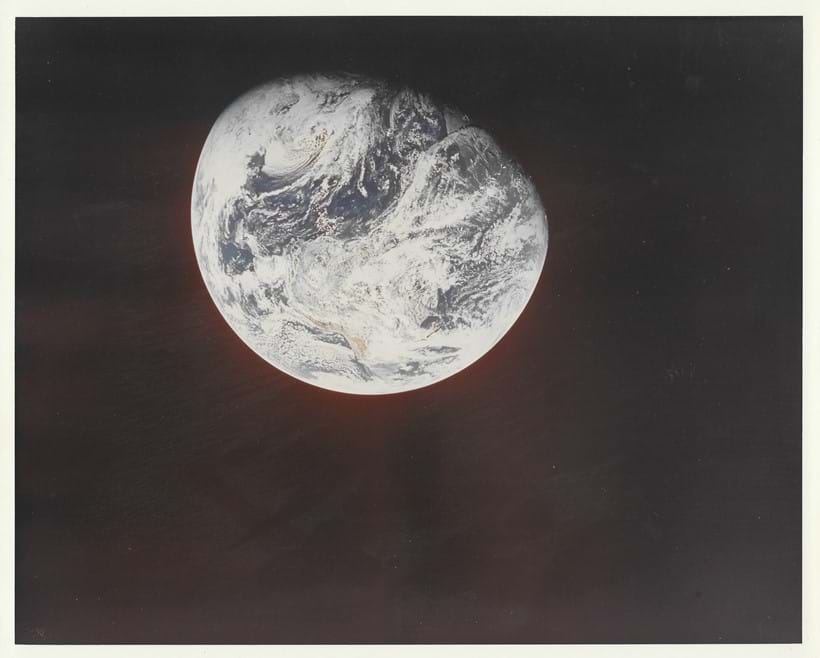 We then have Lot 145, a vintage photograph, showing Apollo 8 'Earthrise'. Shot by William Anders, this is the most celebrated image of the Earth rising above the Moon's horizon. In December 1968 humans reached the furthest point away from their home planet, entering the Moon’s orbit and, for the first time ever, seeing the far side of the Moon. This view was observed by the astronauts on Christmas Eve at 75h 48m and 39s hours of the mission to the Moon and captured in colour on camera. 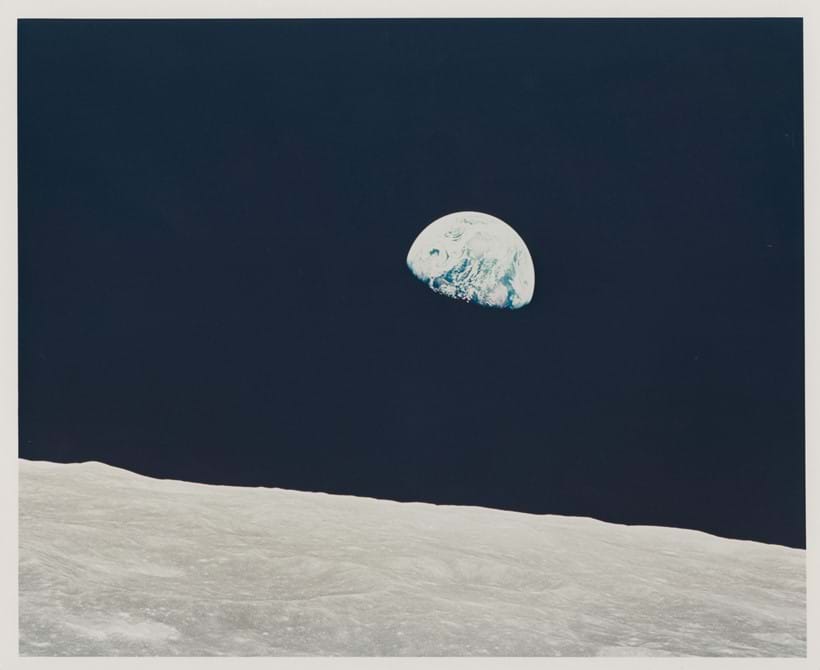 This striking image of the Moon (Lot 160) has superseded any lunar photography available so far. The Apollo 8 mission provided humans with the first ever opportunity to see and photograph in detail the lunar far side and its striking features, which are never seen from Earth’s perspective. 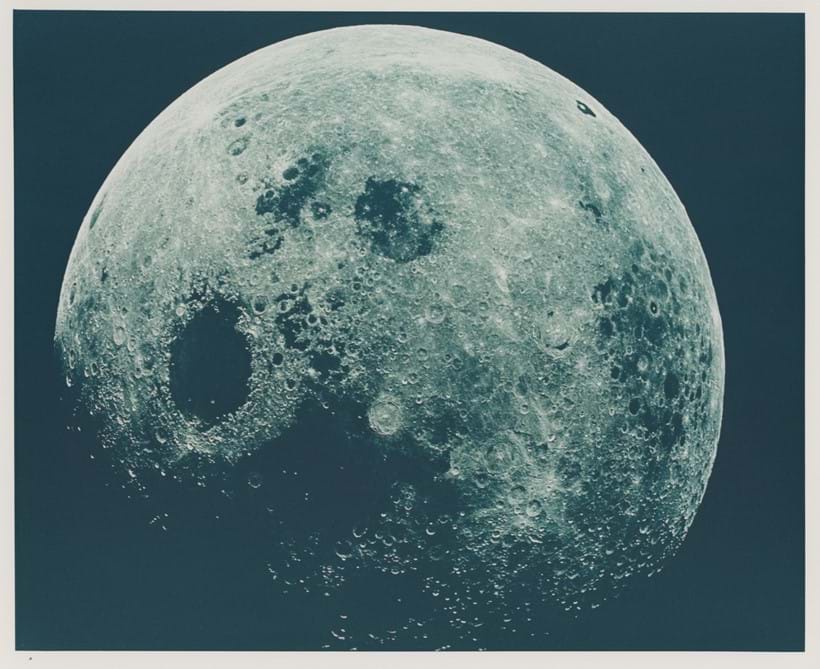 The Apollo 11 mission took place from 16-24 July 1969 and is famous for the first Moon landing. Here we have Lot 239, this is the celebrated 'visor' portrait of Buzz Aldrin. Photographed by Neil Armstrong, Buzz Aldrin stands on the surface of the Moon, casting a shadow on the ground. His gold-plated visor reflects the Lunar Module and the photographer. This large format print emphasises the striking details of this shot. 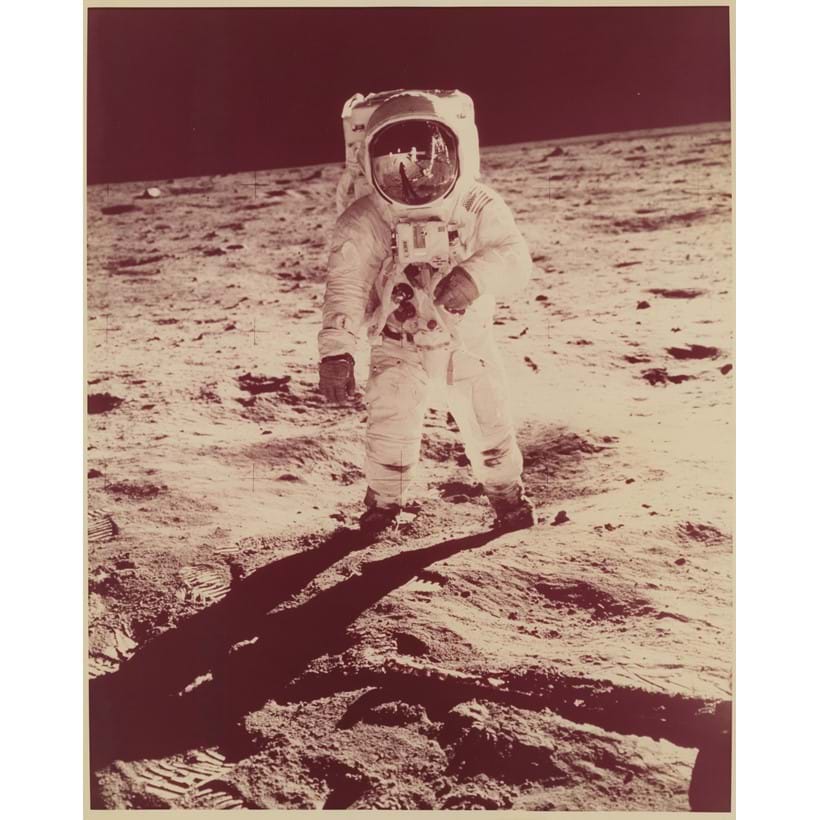 The auction also includes another rare version of this highly sought-after photograph. This version (Lot 240) however is signed by Buzz Aldrin. 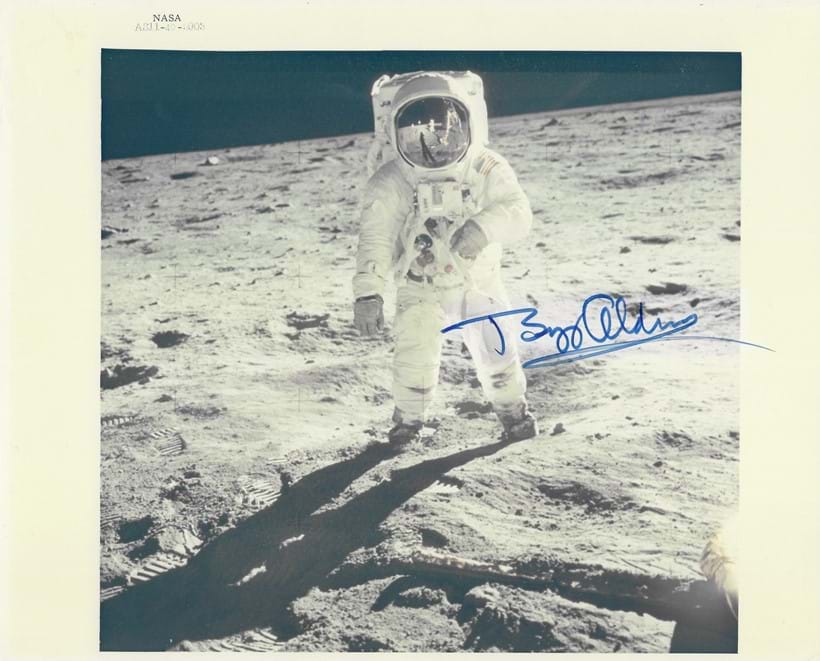 Again, from the Apollo 11 mission, we have two highly desired images of the first two moonwalkers, working inside the spacecraft during the mission. The first is Lot 256, showing Neil Armstrong smiling inside the Lunar Module after the historic moonwalk. 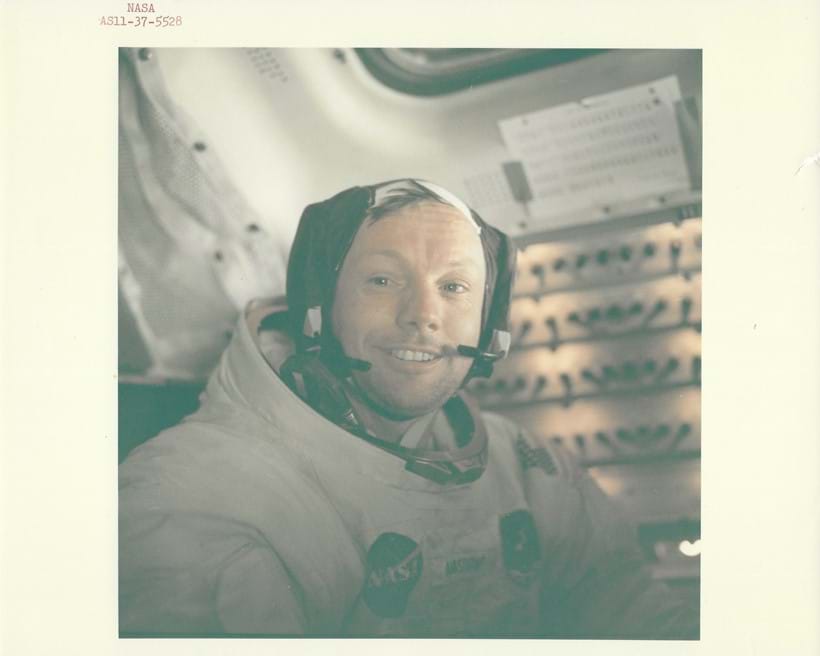 The other is Lot 217, here Buzz Aldrin can be seen working inside the 'Eagle' during the outbound journey. 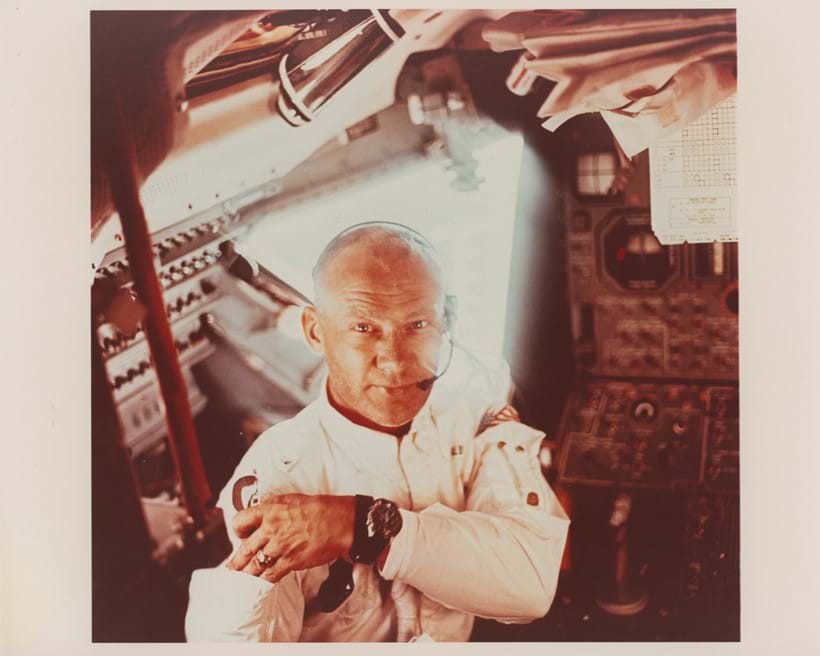 Another highlight is Lot 214, showing Planet Earth. This celebrated view of the nearly whole planet was captured after the translunar injection during the Apollo 11 mission. The photograph shows part of Europe and Asia, as well as a large part of Africa while the crew are nearly 180,000 kilometres from Earth. 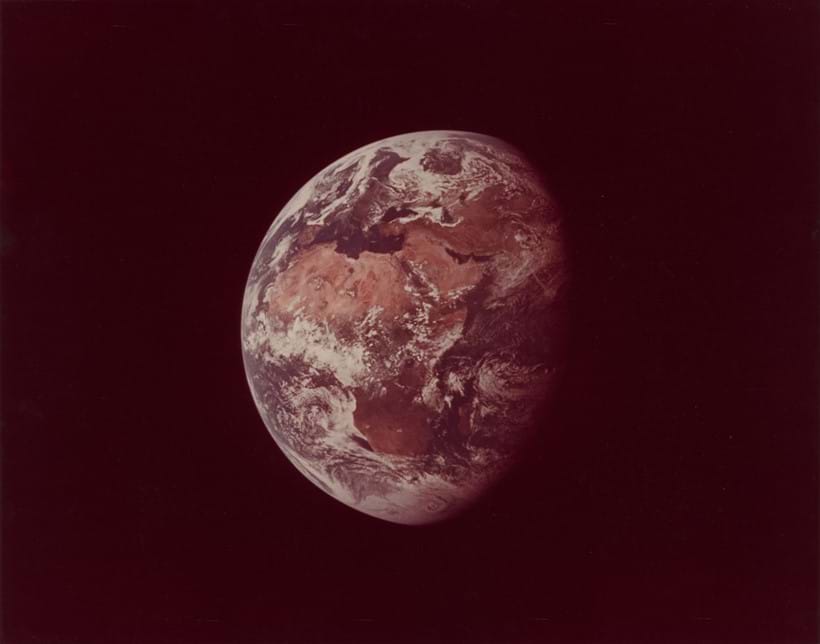 Someone who witnessed first hand some of these extraordinary moments in space history was space correspondent, Tim Furniss. The auction will feature items from his impressive collection. A famous family story recalls how Tim crawled through the legs of a hoard of journalists to take some terrific photographs of the walk-out of the Apollo 13 crew with his Hasselblad camera. Here we have Lot 289, showing the Apollo 13 lift-off taken by Tim Furniss on 11 April 1970. 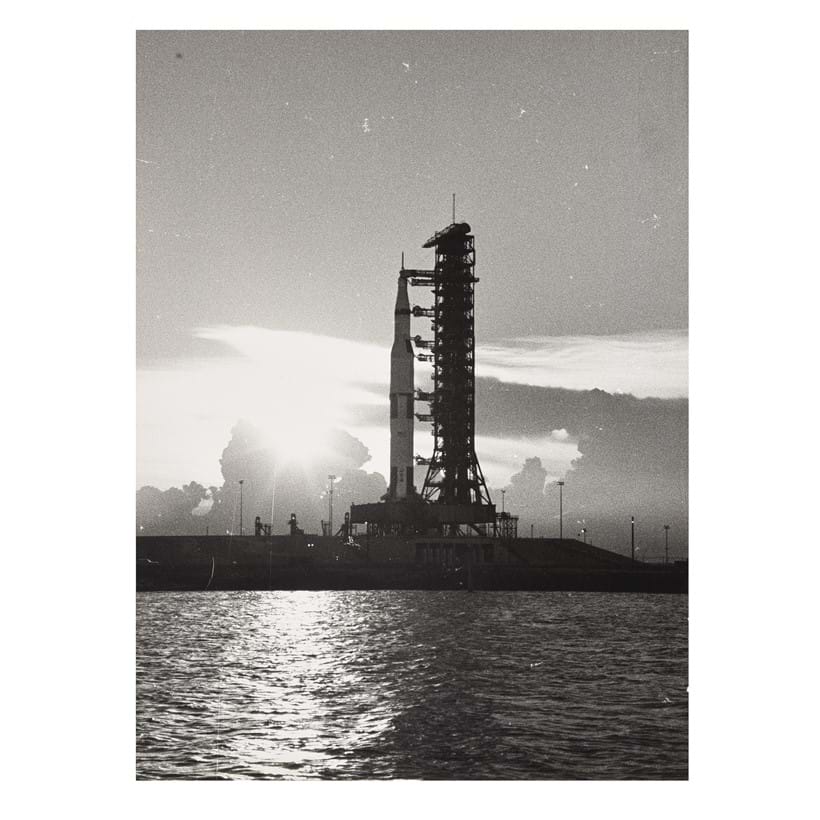 Finally, we wanted to share Lot 401, the historic first colour photograph taken on the surface of Mars, the Red Planet, during the Viking 1 mission. Launched on August 20, 1975, Viking 1 became the first unmanned spacecraft to land successfully on Mars eleven months later on July 20, 1976 and send back to Earth the first images from the surface of the Red Planet. This image was captured on 21 July 1976. 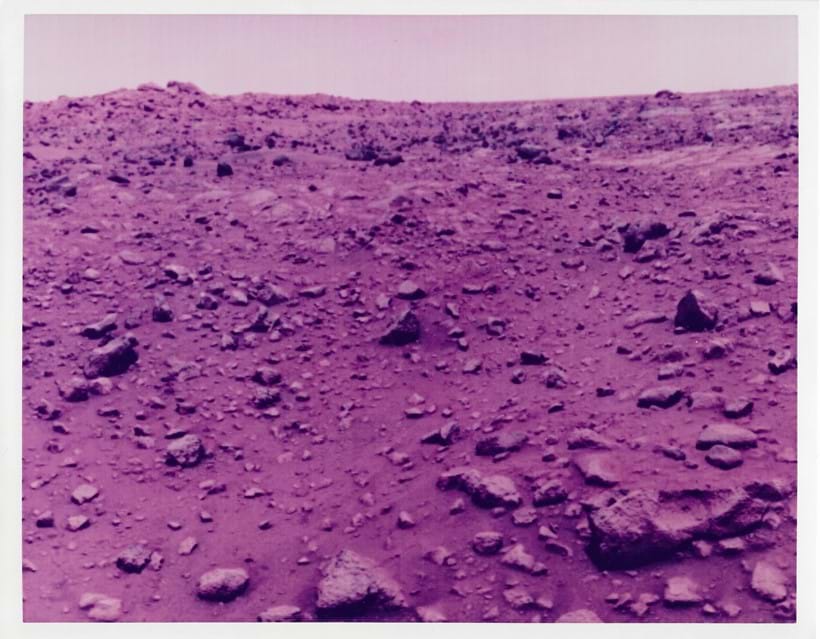