In our Old Master, British and European Art auction on 24 November, we are delighted to be offering The Pinkers Collection of British, American and European Folk Art. Ahead of the auction, Brandon Lindberg, Head of British & European Pictures, talks you through some of the highlights from the collection.

The Pinkers Collection of British, American and European Folk Art

This charming collection of folk art takes its name from a diminutive 17th century fisherman's cottage on the Kent coast where it has hung and grown in size over the last twenty years. It includes watercolours and oil paintings from the 17th to the early 20th Century. Many are in their original frames and in remarkably fresh condition. Despite its rural location and the provincial subject matter of the works it is a truly international collection and many of the lots have come from some of the most important collectors and dealers in folk art on both sides of the Atlantic including Alistair Sampson, Robert Young, Denzil Grant and Charles Plante in England and David Wheatcroft, Joan Brownstein and Austin Miller in America. 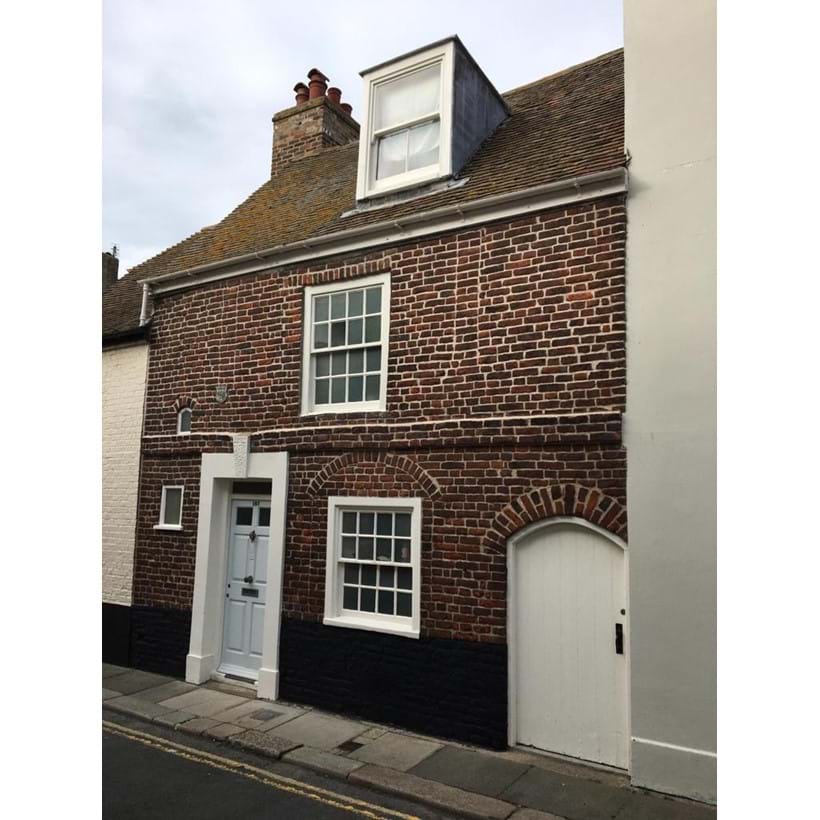 Folk Art has been described as ‘the unselfconscious creativity of academically untrained artists’ (Robert Young, Folk Art, 1999) and it is this quality that gives many of the works an immediacy and playfulness that has chimed with generations of collectors. Some of the pictures, by journeymen artists, artisans or amateurs are provincial reinterpretations of more sophisticated works, such as the early 18th Century Yate family portraits (Lot 122). Others have a joyful disregard of accepted ideas of scale, perspective and colouring, giving them a timeless quality which draws parallels with 20th Century artists including Alfred Wallis and John Nash, such as View from La Moinerie (Lot 120) and the American School Portrait of a girl (Lot 103) has an Outsider Art quality reminiscent of the Art Brut movement founded by Jean Dubuffet. Regardless of their origins this unique and varied collection is the manifestation of the vision and passion of a true collector.

A highlight from the collection is Lot 111, William Winter and his family, Irish School (c.1816). It bears the inscription, 'Oh pary accept this trifling gift/This token I am far from you/Yet I shall love you still/Though cruel fate has parted me/From my dear friends and loves/Yet may I soon return again/No more from you to roam'. This portrait of Private William Winter and his family was most probably painted by a professional letter-writer while he was garrisoned in Dublin in February 1816 with the 1st battalion, 48th Regiment of Foot. As the inscription along the lower edge implies he commissioned it as a token of his affection for his family in Gloucestershire and he sent it to them with a letter, dated the 15th January 1816, which accompanies the lot. 'Dear Father Worthy' he begins and goes on 'I hope you are in receipt of this small gift that I have sent you a Rep(resent)ation of the whole of our family which I ha-got drawn by a friend of mine in Dublin and I hope it will please you all'. Concerned that the picture has been creased in the post he suggests 'You must take a warm **** to **** the crumples out of the paper when you open the letter'. Although the letter is indistinct in places it identifies several of the figures including his mother and father and three of his siblings as John, James and Mary. In the letter he regrets '...you could not send me that gift of money, it should have been very (acceptable)'.

Intriguingly on the 17th June that year, just over six months after he wrote to his family, he deserted his regiment and by the 12th of July had been detained and committed to imprisonment at Chester. The regiment was soon after commissioned to serve in Sydney, New South Wales. Did he intend to use the money to buy himself out of the army? When it was not forthcoming, was the thought of being on the other side of the world too much for this homesick and affectionate son to bear. Was he left with no option but to desert? Continuing through the sale we have Lot 118, Christmas Eve, Carle L. F. Rumpf (German, c.1821). This charming depiction of a happy and bountiful Christmas Eve was most probably painted in Frankfurt-am-Main in 1821 and shows the custom, held in many northern European countries, of celebrating Christmas Eve with presents. The scene has the air of a children’s party and the setting, which is neat and well-kept, has the slightly spartan feel of a school room, boarding house or orphanage. It has been suggested that the children may be choristers in a cathedral school awaiting the midnight mass and services on Christmas day. The city of Frankfurt-am-Main had several artists named Rumpf in the 19th Century so this picture may offer a window onto their extended family. Either way the air is alive with the chatter, music and laughter of a party in full swing. The table is laden with presents and the scene is a visual feast with children enjoying a variety of games, while the split view on the right edge of the picture shows more guests climbing the steps to join the party.

The figures appear well dressed and modestly prosperous. In many ways it is a quintessential Biedermeier image, the period from the end of the Napoleonic Wars in 1815 to the middle of the century which brought economic stability to northern Europe and stimulated Industrialisation and a growing urban middle class. Their interest in the arts sits between the Neoclassical and the Romantic and often focussed on the humble elegance of domestic interiors. 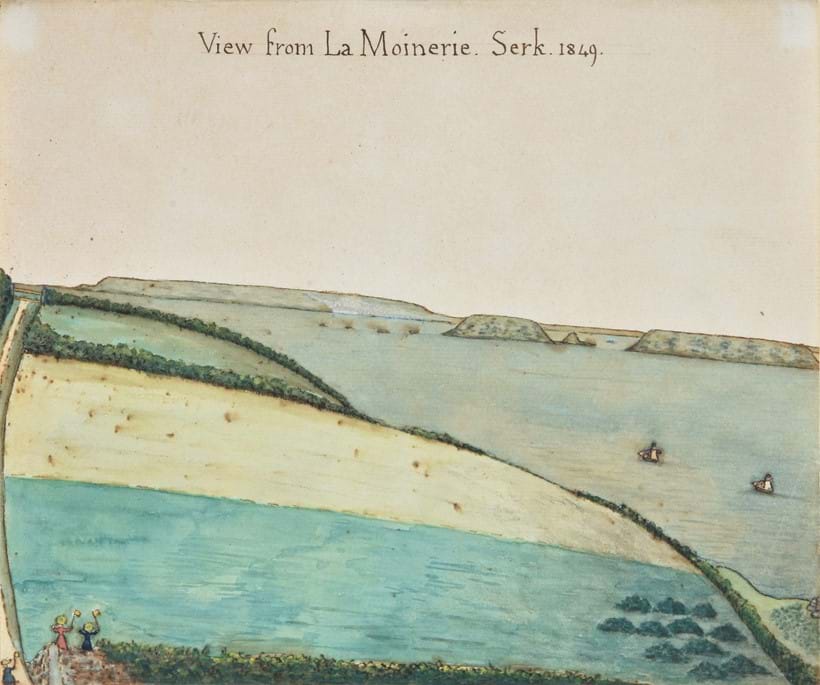 Lot 120 from the auction is A view of La Moinerie, Serk, 1849, Channel Islands School (19th century). Together with Lot 119 these lots depict an estate in the north west corner of Sark, the third largest of the Channel Islands. The title La Moinerie, which is middle French for monastery, was established by St. Magloire, Sark’s patron saint, who settled on the Island in the sixth century. It was formerly the property of the Seigneur or Feudal Lord of the Island and was one of the forty Sark Tenements established by Helier de Carteret in the fourteenth century. Each Tenement has a seat in the Island’s parliament, known as the Chief Pleas. In 1929 the Tenement La Moinerie de Haut passed to the owner of the nearby island of Brecqhou.

Although dated 1849, this strikingly modern landscape encapsulates many of the timeless qualities that make primitive art by academically untrained artists so beguiling. The joyful disregard of accepted ideas of scale and perspective inspired many modern British artists from Ben Nicholson onwards.

From the selection of American Folk Art, a highlight is Lot 103, Portrait of a child, American Naive School (19th century). 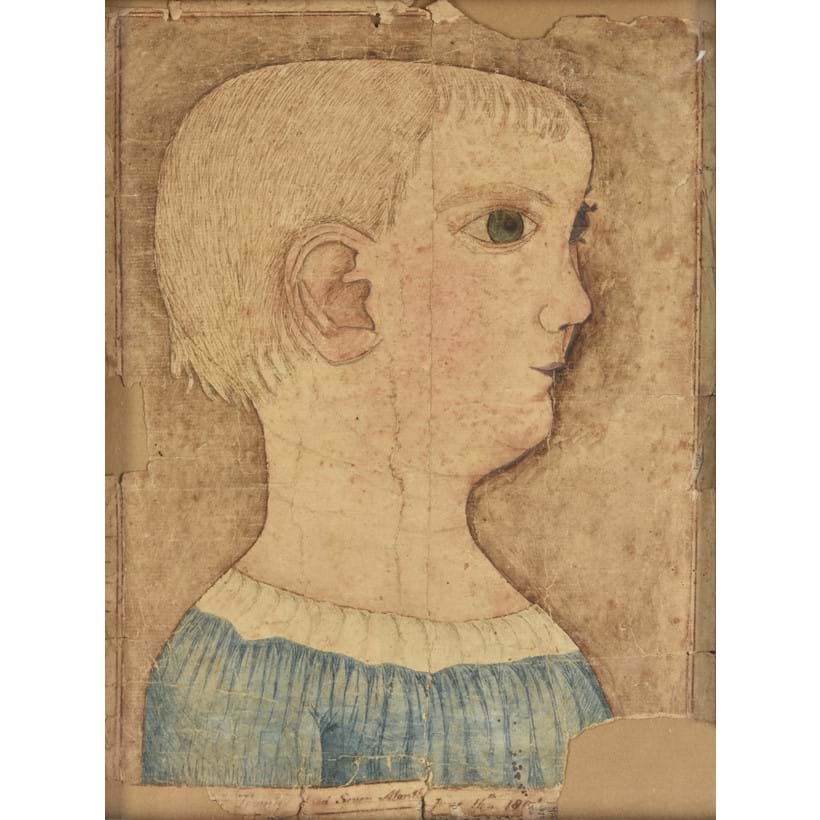 This endearing portrait of a child created in America, most probably in the early 19th Century, is one of the most striking images in this collection. The carefully drawn silhouette and subtle colouring contrasts with the unconsciously naïve flattening of the perspective. It has a static, stiff, doll-like quality but the character of the child shines through. 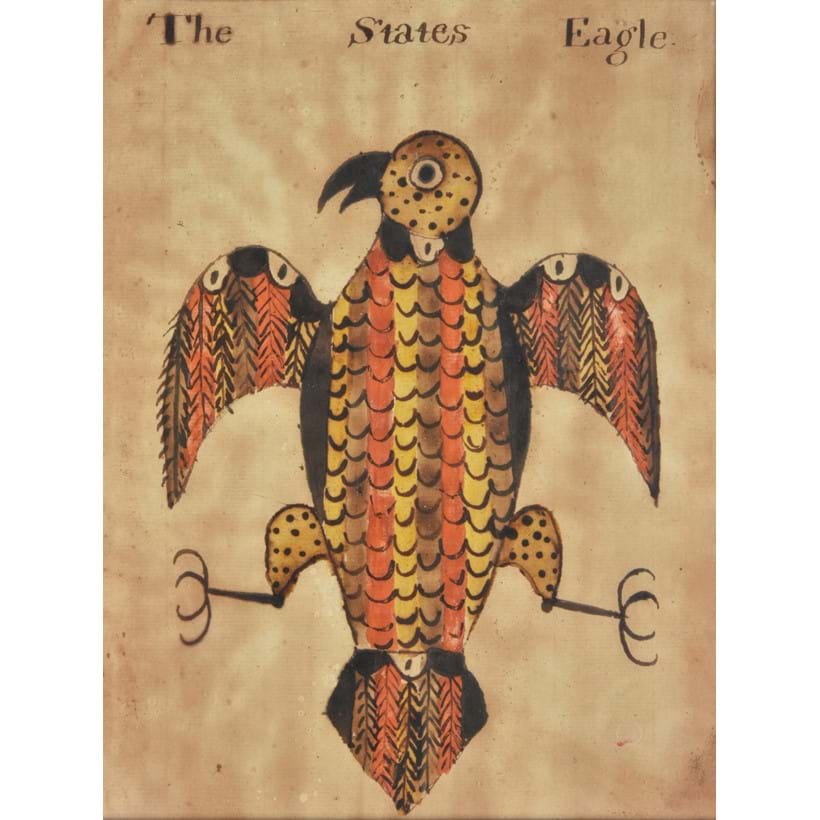 Another highlight is Lot 99, The States Eagle, American School (early 19th century). It believed to have been painted in New England, circa 1810.

In the early years of the American nation, the need for a national symbol was acutely felt. They appropriated many existing symbolic forms, but none were to become as pervasive as the eagle. It was the ancient symbol of Jupiter, king of the gods, and the young nation was eager to model many of its institutions on the Roman Republic, so the eagle, proposed by Pennsylvania scholar William Barton, seemed a natural choice.