One of the highlights is The Manning Collection (Lots 109-130). This is the private collection of an Oxfordshire gentleman formed over many years and includes a wide variety of steam locomotives, scale steam models, fine dioramas and Vincent motor cycles.

Without doubt the stars of the show from this collection are the two rare Vincent motor cycles from the 1950s in restored condition. Lot 129 is a 1954 Vincent Twin 998CC 'Rapide Series C' Motorcyle. It is a fine example of this classic motorcycle, sympathetically restored to a high standard in lined black paintwork, with 'The Vincent' transfer to fuel tank.

The Vincent Series A's was developed in 1937 and the Vincent v-twin has been synonymous with design innovation, engineering excellence and superlative high performance. Vincent twins were the regarded as the world's fastest production motorcycle in 1948 and this was achieved on a tuned 'Series B' Black Shadow. Philip Vincent's had it all and their appearance and performance is legendary. His machines had the latest developments which included adjustable footrests, brake pedal, seat height and gear-change lever. The finish of the Vincent was to a very high standard and gave his competitors little chance of meeting his high standards. Also the Vincent's v-twin's superior performance captivated motorcyclists. The top speed was in the region of 120mph, making it the fastest road vehicle of its day.

In 1948 the Vincent began to be updated from 'Series B' to 'Series C' specification. They changed the suspension and had hydraulic damper fitted between the spring boxes. They fitted Vincent's own 'Girdraulic' forks with twin hydraulic dampers. Vincents 'Series C' specification motorcycles came on to the British market in 1950. They were the most wanted motorcycles of the time.

Then we have Lot 130, a 1950 Vincent 499CC Comet. Again this is a fine example of this classic motorcycle which has been sympathetically restored.

Some of the development of the Comet came from pre-world war days with the Series-A Vincent-HRD v-twin being created by combining two of the existing single cylinder engines. The Series-B twin appearing in 1946, and the single-cylinder version in 1948. The latter was offered in two forms initially: Series-B Meteor and Series-C Comet. Apart from its Burman gearbox and single cylinder, the Comet followed Series-C twin lines, featuring the 'Girdraulic' front fork and hydraulic dampers at front and rear. The Comet remained in production until 1954 and was very popular, combining a 90mph potential top speed with high fuel economy, which made it an ideal touring bike. The Comet was an expensive machine to produce and Vincent decided to drop the Comet model when it did not sell as well as they hoped and replace it with the Series-D range.

Another highlight is Lot 112 a very large diorama model of a Foster of Lincoln Threshing Machine in approximate 1 1/2 inch scale. It comes with working parts, tool box, ladder and figures with sheaves of corn, together with a Foster elevator on transportation wheels. The machinery is being driven by a Robey Portable steam engine and two heavy horses in full leather working  harness with farm workers in the foreground. The whole model is set on plinth bases and was built by Mr C W Glenworth of Louth. It is designed in three parts to allow it to be easily moved or displayed separately. 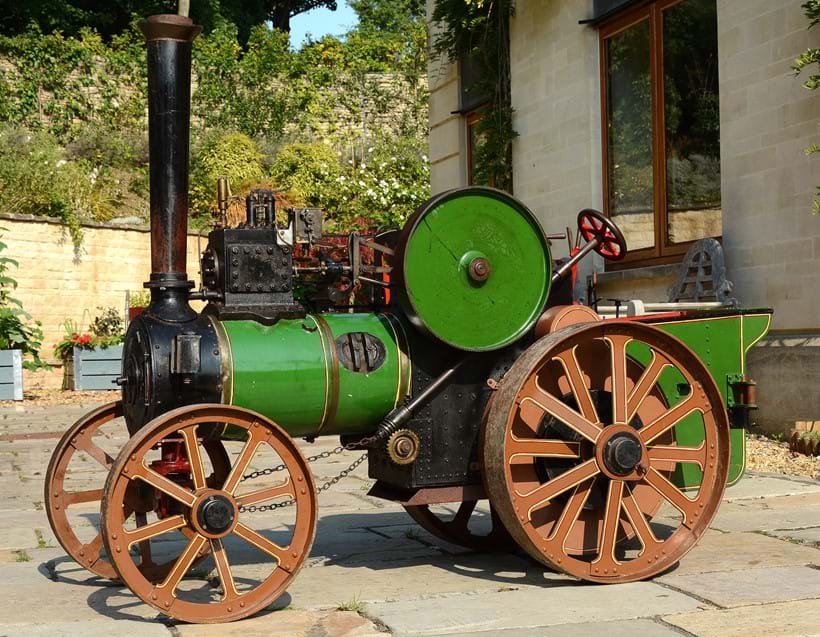 The collection also features Lot 109, a freelance approximate 4 inch scale model of an agricultural traction engine. The model was built by Mr B B Judge of Lincolnshire in 1989, and is finished in green, black and red paintwork with brown lined spoked wheels.