The exciting Wimbledon season has drawn to a close which saw Nick Kyrios compete with Djokovic for the champion spot in a fiery and action packed game with Djokovic winning the title for the men. The ladies title was won by Elena Rybakina from Kazakhstan and saw competitive play from Ons Jabeur and Simona Halep.

Famed for serving strawberries and cream, taking picnics on Murray Mound, and of course the highest quality tennis from around the world, Wimbledon is one of Britain’s most celebrated events watched worldwide.

In our forthcoming Fine Art auction, ending on 26 August, we are pleased to present this detailed and intricate watercolour by artist and illustrator Sue Macartney Snape. This caricature has magically captured all the social stereotypes and characters from a tennis match at Wimbledon in 1999. 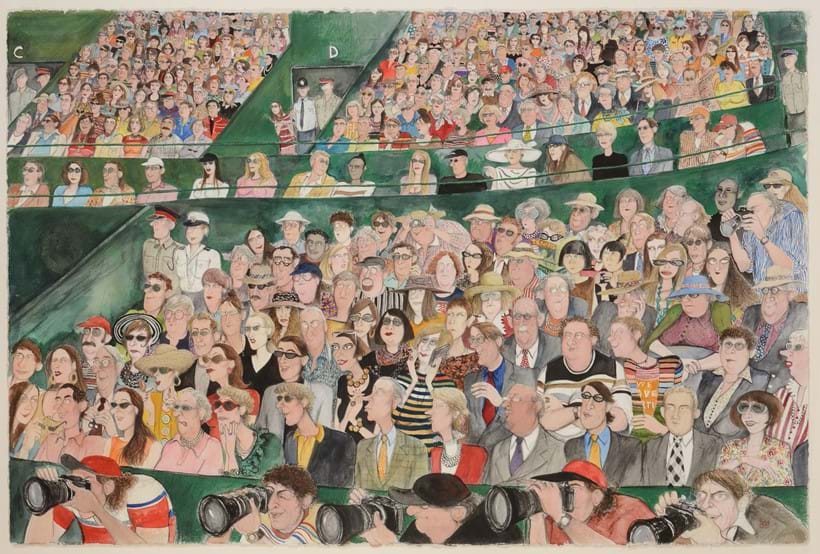 Snape was born in Tanzania in 1957 and grew up in Australia before moving to London, where she is now based. Snape's reputation as illustrator for the 'Social Stereotypes' column at The Telegraph Magazine widely increased her popularity.  A selection of these illustrations have been published over nine very successful books.

John Julius Norwich commented that her works "illustrate the English social scene more brilliantly and with greater accuracy than those of any other painter working today."

In 2004, Snape won the Pont Award for drawing the British character and she has held sell out exhibitions with David Ker and The Sloane Club. Important commissions have included Glyndebourne and The Metropolitan Opera. 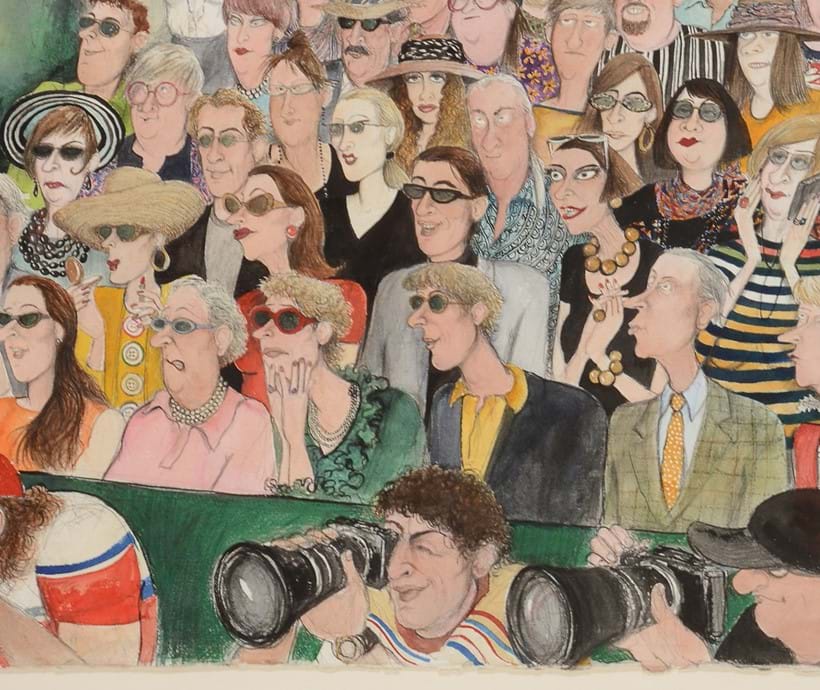 Snape has perfectly captured the electric atmosphere from Wimbledon in 1999. Each spectator with their individual personalities, some intently watching the action whilst others sit back to read the paper. The press photographers line the front row posed waiting to shoot a winner. Snape has considered all the details right down to the security staff at the entrance to the court. Her ability to illustrate detailed personalities whilst combining wit in a snapshot which illustrates a moment in time is masterful.

At Wimbledon in 1999, Pete Sampras won the men's singles and Lindsay Davenport the women's singles. It has been suggested that the Who's Who of the celebrity world might be present in and amongst the crowd, names such as Sir Terry Wogan, Betty Boothroyd, Joanna Lumley, Elton John, David Hockney, Meryl Streep, Anna Wintour, Jennifer Patterson and Tom Bower.

Remote Viewing is available by appointment from Wednesday 10 August. Our Remote Viewing Service allows you to view specified lots via your smartphone from the comfort of your own home at a time convenient to you. Find out more here.