Over 180 lots have been consigned to Dreweatts’ Fine Clocks, Barometers and Scientific Instruments auction on the 24 June.

Amongst the lots consigned are a number of rare and sought-after clocks that are sure to catch the eye of collectors and enthusiasts around the world. Leighton Gillibrand, Director Head of Clocks, Barometers and Scientific Instruments, has selected six of the most intriguing pieces to help get our readers started.

Lot 99 is a fine example of a grande-sonnerie striking carriage clock by French maker Pierre Drocourt. Built in the late 19th century, the clock is housed in a fine gilt brass oval case with intricate engravings befitting a piece destined to be retailed by Tiffany and Co.

The desirable shape of the clock and the rare specifications are what spiked Leighton’s interest in this particular lot. With that in mind, Leighton has awarded the clock a pre-sale estimate of £4,000-6,000 (+fees). 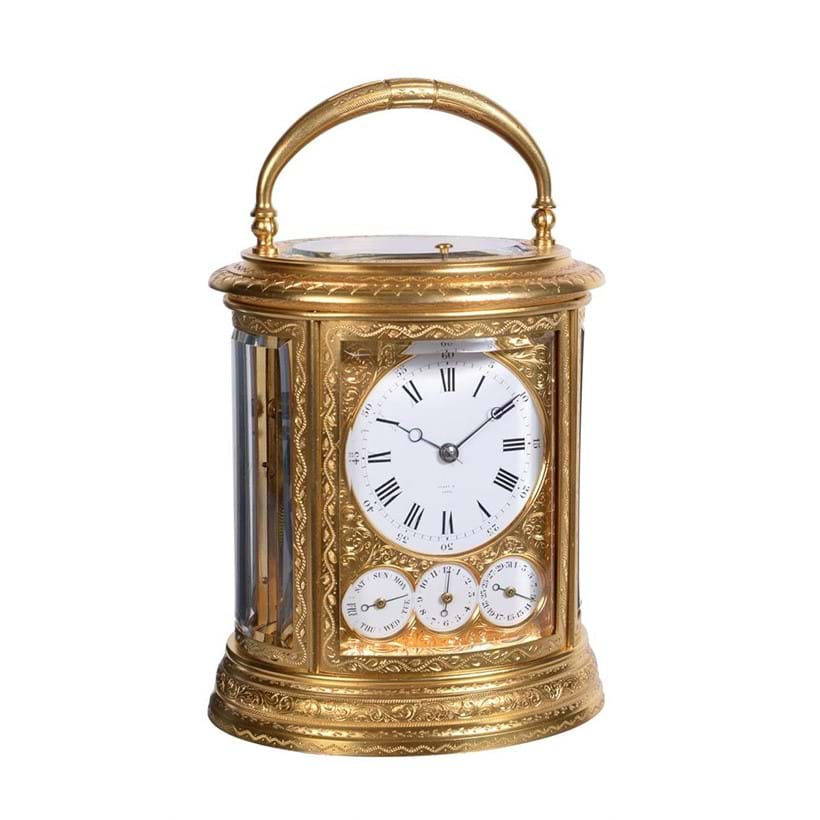 Lot 129 is one of the finest clocks of its type that’s been consigned to a regional auction in recent memory. The stunning enamel work that graces both the dial and side panels is the artistry of Limoges famous enamel workshops.

The clock itself is thought to be the work of Parisian clockmaker A. Dumas. A franked label for Limoges dated 1878 on one of the rear panels allows accurate dating of the clock.

The wonderful enamel work featured will no doubt attract a large number of collectors. With this in mind Leighton has given it a pre-sale estimate of £5,000-7,000 (+fees) 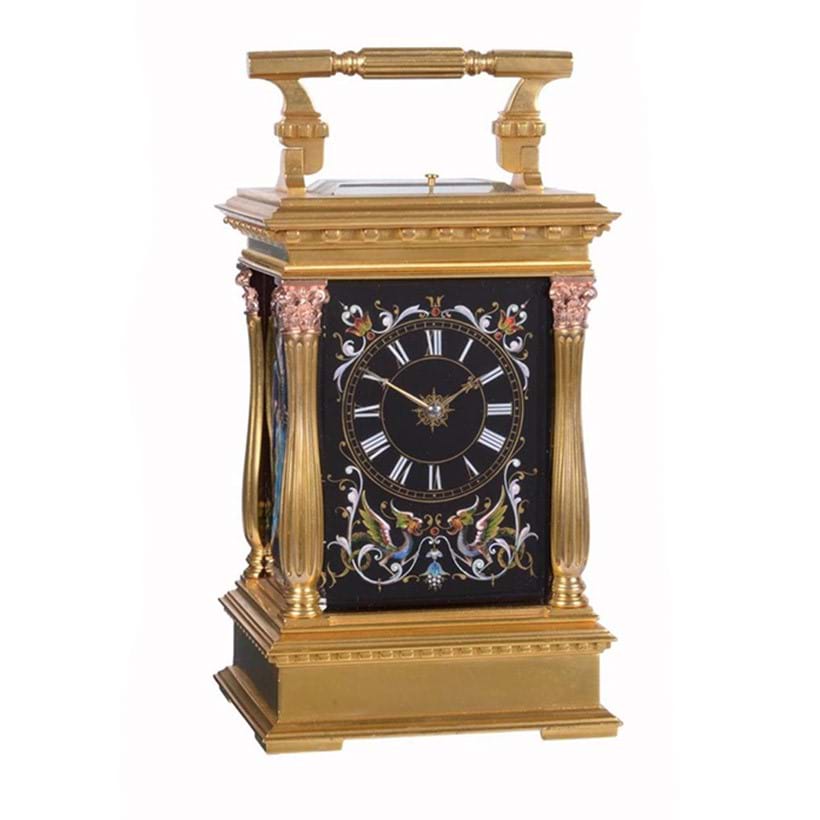 Lot 131 is a late 19th century carriage clock, housed in a silver and gilt brass casing and retailed by Tiffany & Co.

The most striking element and the feature that really caught Leighton’s eye, was the porcelain inset panels thought to be the work of French painter Lucien Simonnet.

Simonnet was a Sevres-trained painter of porcelain who appeared to specialise in producing the finest figural panels, often based on works by well-known artists of the period.

The movement is unsigned, but Leighton confirms the quality is equal to that of Drocourt, Margain or Henry Jacot. Taking into account the quality of both the porcelain panels and the mechanism, Leighton has given a pre-sale estimate of £3,000-4,000 (+fees). 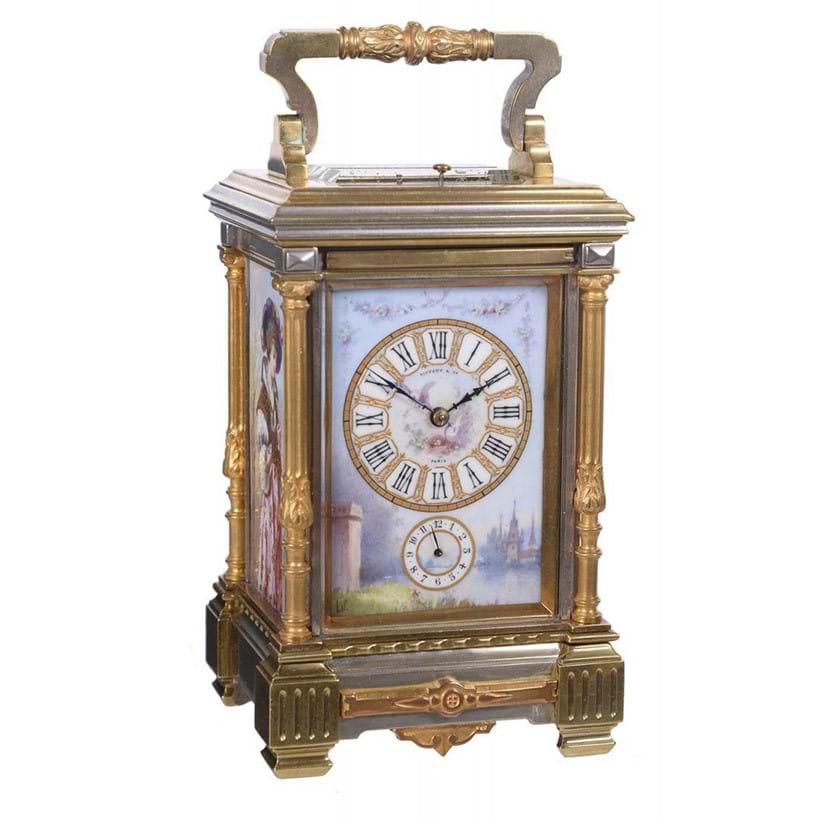 Lot 145 is an extraordinarily rare mantel clock by the Grenoble-based clockmaking family Fournier.

The Fournier family were responsible for the mechanism, but the distinctive and fun teapot casing is proven to be the work of Parisian maker Claude Galle. Of the very few known examples of this model, at least two are signed by Mr Galle, confirming that the cases were made in his workshops.

Galle was a highly renowned clock maker throughout France, employing close to 400 clock makers in the late 18th century, whilst earning many commissions to furnish France’s royal palaces.

This extremely rare and particularly fun piece has piqued the interest of Leighton. He has awarded it a pre-sale estimate of £5,000-8,000 (+fees) and expects interest to be very high on the 24 June. 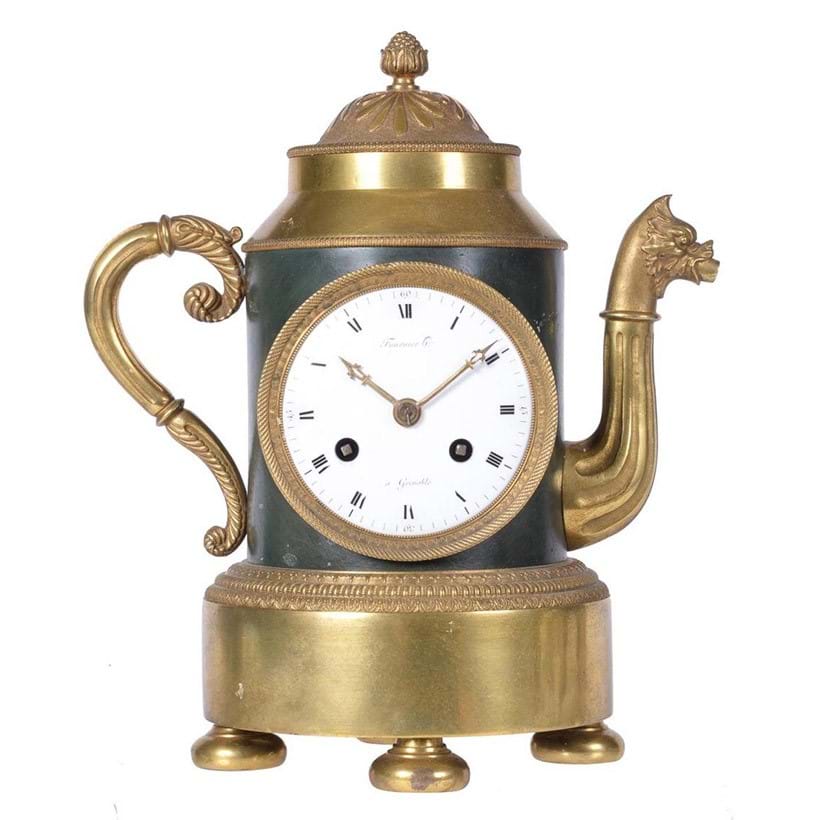 The illustrious Fromanteel family are arguably the most important clock-making family of all time.

Their famous clock-making exploits began with Ahaseurus Fromanteel, a clock-maker from Norwich who was dubbed the ‘Father of English clockmaking’ for a series of rapid technological advancements during the mid 17th century.

Ahareus was followed into the clock making business by his three sons John, Abraham and Daniel. Each of the sons upheld his fine tradition of accurate movements, the likes of which Britain had never seen.

It is John Fromanteel who we can thank for Lot 185, an extremely rare movement that’s certain to capture the attention of collectors around the world.

Leighton was delighted to take consignment of this piece of horological history, and expects the movement to achieve between £1,500-2,000 (+fees). 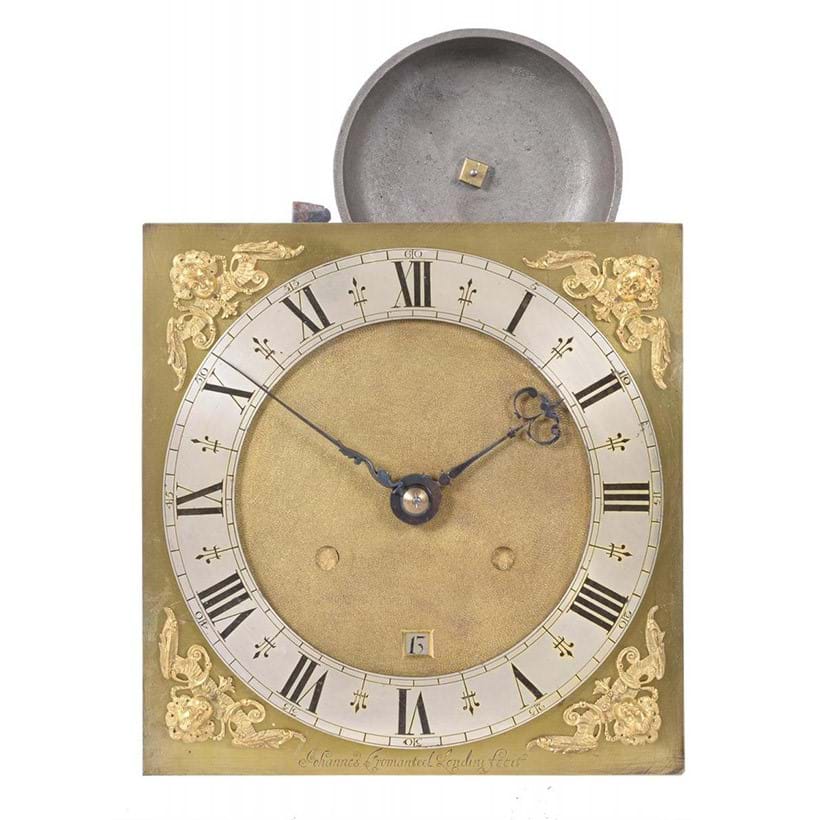