On the 12 October, we have our Modern and Contemporary Art auction. From the selection of Modern British Sculpture, we have Lot 184, this lovely pair of sculptures by British artist Lynn Chadwick, titled 'Walking Cloaked Figures VIII'. Made from bronze with a black patina and polished bronze, they were conceived in 1980 and cast in a numbered edition of 9.

“It seems to me that art must be the manifestation of some vital force coming from the dark, caught by the imagination and translated by the artist’s ability and skill. Whatever the final shape, the force behind is... indivisible. When we philosophise upon this force, we lose sight of it. The intellect alone is still too clumsy to grasp it.”

~ Lynn Chadwick in discussion on the BBC Home Service, published in The Listener, 21st October 1954

Together with his contemporaries Henry Moore, Barbara Hepworth, Jacob Epstein and Eduardo Paolozzi, Chadwick is inextricably associated with the British Modernist Sculpture movement of the mid-20th century. Initially specialising in architectural design both before and after the Second World War, by 1946, Chadwick had started to move away from the intangible world of design instead finding himself increasingly drawn to the tangible nature of objects. A year later, in 1947, Chadwick made his first mobile. Encouraged by his employer at the time, Rodney Thomas, these wire, metal, copper, and brass shapes were first used to decorate the exhibition stands of Thomas’ company and then later turned into ‘stabiles’ by adding ground supports. Around 60 mobiles were created between 1947 and 1952.

Although very few of these mobiles survive today, this was clearly the very beginning of what would eventually evolve into Chadwick’s signature bronze and steel abstract figures that we know so well today.

In 1951, Chadwick was commissioned by the Arts Council of Britain to produce a large-scale sculpture for the Festival of Britain, The Fisheater, which went on to be exhibited at the Tate Gallery until 1952. It was also at this time that Chadwick was asked to present to the selection committee of the XXVI Venice Biennale who selected him together with seven other emerging British artists including Kenneth Armitage, Robert Adams, and Eduardo Paolozzi to exhibit in Venice that year. It was after this exhibition that Chadwick really established his reputation as a member of the New British Sculptors. In 1956, Chadwick returned to the Venice Biennale, this time winning the International Sculpture Prize - the youngest artist ever to do so. 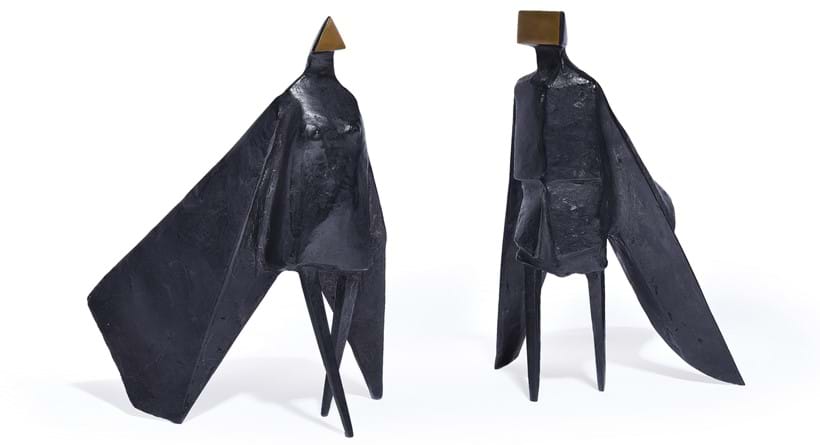 During this period Chadwick became increasingly interested in form with his designs becoming more identifiable as figures; their thin and tapering legs and geometric heads, in Chadwick’s words ‘adding flesh to the skeletons’. By the 1960s, Chadwick was experimenting with bronze casting and by the 1970s, he had established a visible vocabulary of sexual differentiation - triangle or diamond heads for female and square or rectangular heads for male. In addition, the technique of adding polished facets to his figures both added texture and accentuated specific parts of anatomy.

This is clearly demonstrated in Walking Cloaked Figures VIII which also combines the artist’s timeless architectonic forms with elements of the human, animal and mechanical. The use of clothing, specifically flaring cloaks helps to add a sense of movement to the work.

There is no real narrative to Chadwick’s works, but it is perhaps the stoic silence and anonymous strength which makes his works so intriguing and timeless.

Chadwick remained active until only a few years before his death in 2003, aged 88. Throughout his career and beyond Chadwick remains a recognised household name. In 1964, he was awarded a CBE, and later in 1984 made Officer de l’Ordre des Arts et des Lettres in France. In 2001 he was appointed Senior Academician at the Royal Academy of Arts, London. His work is held in major collections and galleries around the world including the Tate Gallery, London, and Museum of Modern Art, New York.