On Wednesday 16 March, Dreweatts held its auction of Modern and Contemporary Art. Comprising 193 lots, the auction included a cross-section of works from sculpture to oils, drawings and limited edition prints representing some of the most important artists from the modern British era right through to the contemporary.  The auction totalled £1,115,663 (incl. buyer's premium), 30% above the pre-sale high estimate.  Here we take a look at some of the highlights.

We are now welcoming entries for our autumn Modern and Contemporary Art auction taking place on 11 October 2022. For a free auction valuation, please contact our picture specialists  on: +44 (0) 1635 553 553 | pictures@dreweatts.com. Alternatively, you can also complete our online valuation form, here.

'Mother and Child' by Henry Moore

Commenting on the result, Head of Sale, Francesca Whitham said, "We are thrilled with the amazing result achieved for the mother and child sculpture by Henry Moore. It shows that rare and unique pieces will always inspire competitive bidding and that the appetite for such strong works remains strong. The sculpture was enthusiastically contested with bidding both online and on the phones and having been left undiscovered for over 40 years, this very special lead sculpture now heads to a new home with a UK private collector." 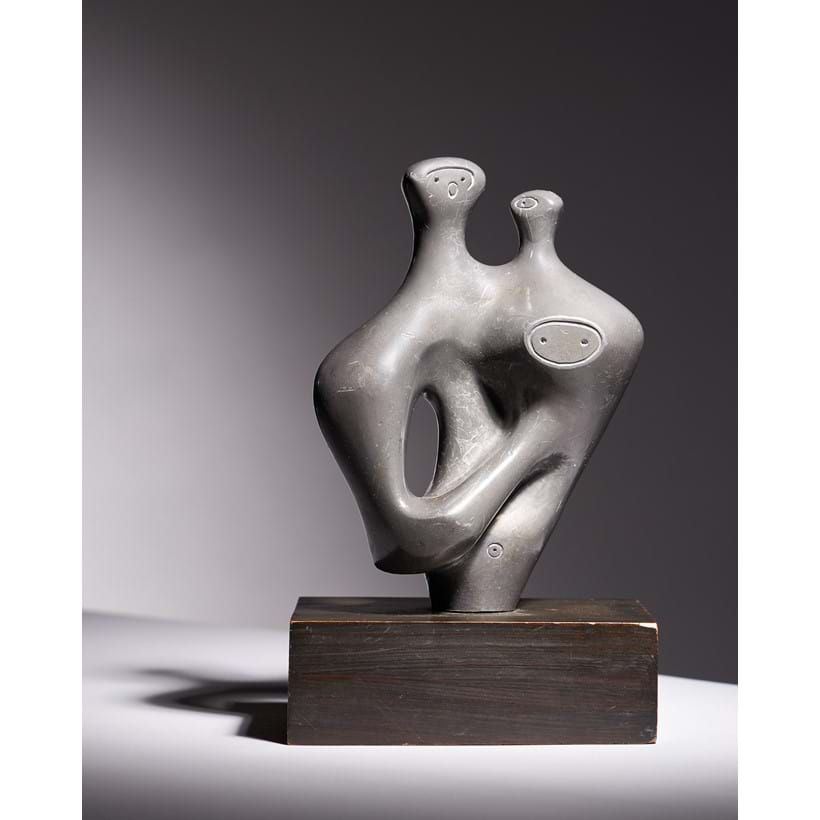 The work is considered an extremely rare piece as it is cast in lead, which was a material the sculptor only used for a short period in the 1930s, during a time in his career when he was experimenting with other materials such as string and wire for his series of stringed sculptures. Mother and Child is believed to be a preliminary design for one of these stringed sculptures, which explains the unusual markings on the front of the sculpture, which add to its’ joyful and playful nature. Mother and Child was authenticated by the Henry Moore Foundation in October 2021 and has been added to their archives under the reference number LH 213a.

It was left undiscovered for over 40 years, nestled amongst trinkets on a mantlepiece in a Wiltshire farmhouse. This very special piece came from the former collection of architectural publisher and editor, Hubert de Cronin Hastings (1902-1986).  Read more.... 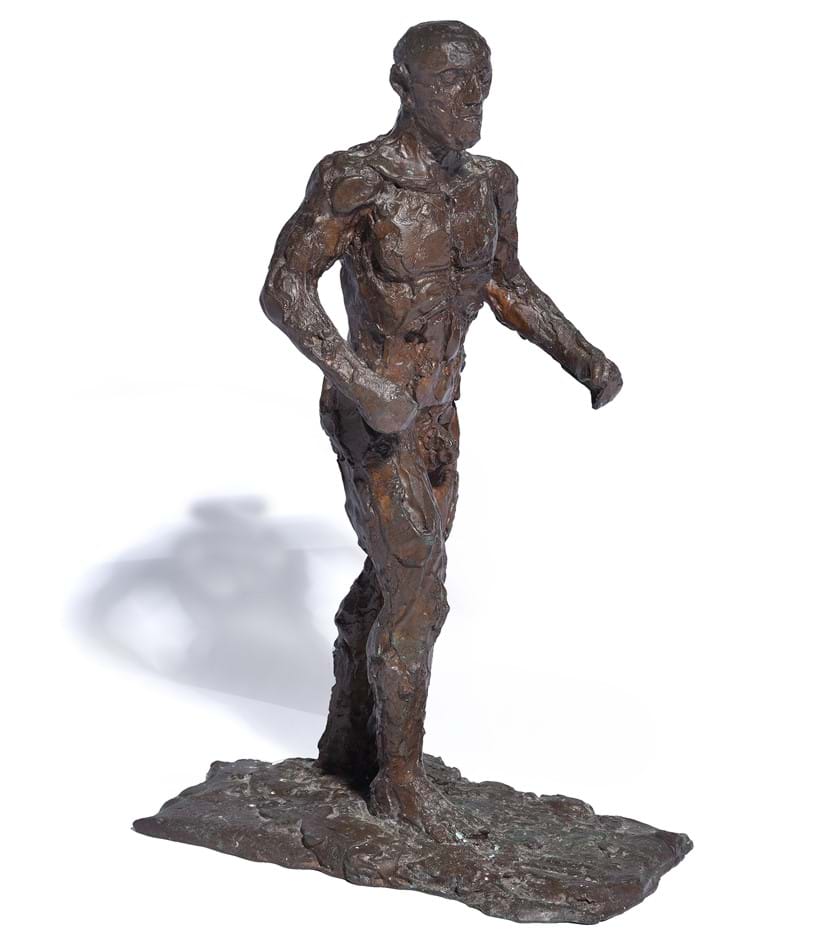 Small Male Figure was conceived in 1986 and cast in an edition of 15. The work was a commission from the artist by the National Ankylosing Spondylitis Society and comes from the collection of Dr. Allan St. John Dixon MD FRCP OBE (1922-2014), who was one of the founding members. As one of the early casts, the present work is unnumbered as the edition was originally intended to be unlimited but was subsequently limited to 15 with later casts numbered.

'The Vase of Flowers by an Open Window' by John Piper 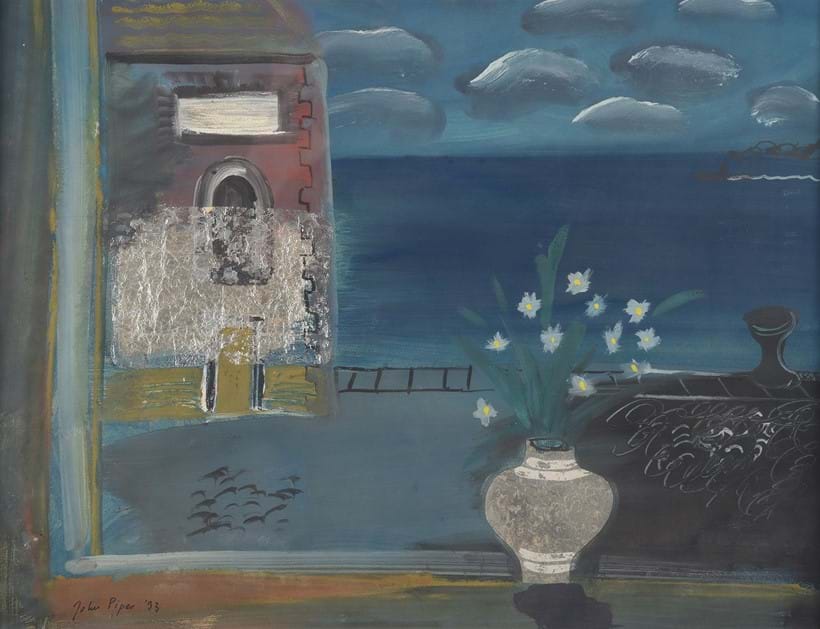 During the 1930s, Piper was experimenting with modernism, combining pure abstraction with a more representational, yet distinctive, style that was to characterise his work for the rest of his career. The vase of flowers by an open window is one of a number of comparable works that Piper produced on the same theme during this period. He can be seen here juxtaposing the interior with the exterior through the placement of the vase in the foreground against the broader landscape beyond. His use of windows and window ledges as framing devices to direct the viewer's gaze is a tool frequently used by artists and one employed by Piper in a number of paintings of this period. In these landscapes, we see Piper experimenting with different media, working spontaneously with everyday objects that he had to hand. He was frequently drawn to the use of silver foil, which created the reflective properties required of moonlight or waves and provided a contrast to the opaqueness of the paint. Newspaper, cut-outs of old engravings and marbled paper along with paper doilies were among other materials with which Piper frequently embellished his paintings of the period.

Another highlight was when Lot 147, Mountain Landscape, Mallorca, no. 2 this vibrant work by Frederick Gore, sold for £17,500. 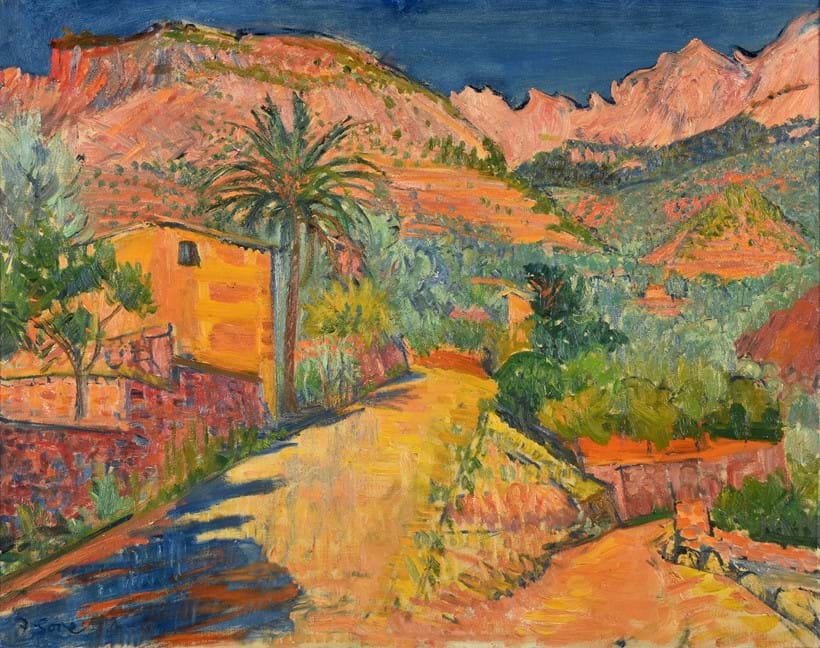 Gore frequented the village of Fornalutx under the Puig Major mountain each summer during the 1960s to capture this exotic landscape. He was mesmerised by the way the light bounced off the deep pink earth of the mountainous terrain in Mallorca and the vibrant colours that spread across the landscape; orange groves, red plants, blue flowering morning glory. The present lot Mountain Landscape, Mallorca, no. 2 captured the warmth of the pinks, oranges and yellows in juxtaposition to the cool blue of the shadows and sky.

The auction also included a selection of works by the East London Group, including artists such as Walter Steggles, Harold Steggles and Elwin Hawthorne. An auction highlight was when Lot 76, Old Ford Road, Bow by Harold Steggles sold for £12,500. 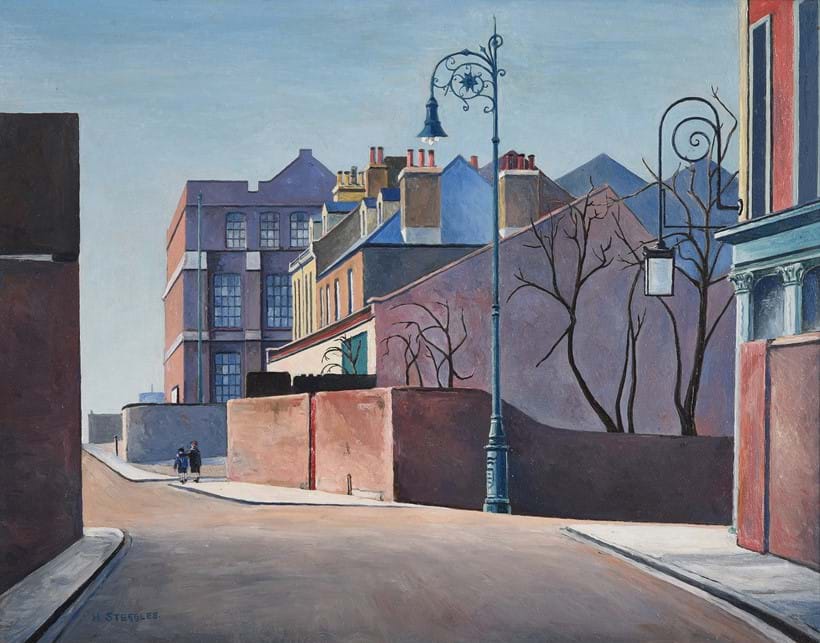 Painted in 1932, this work by Steggles was exhibited by Alex Reid & Lefevre Ltd. in their exhibition New Paintings by the East London Group in December 1932. It was then bought in 1932 by Sir David Scott for 15 guineas. It remained in his collection for 76 years, before being sold by Sothebys in their 2008 auction, A Great British Collection: The pictures collected by Sir David and Lady Scott, sold to benefit the Finnis Scott Foundation. It now finds its way to a new home having been bought from our salerooms by a UK private collector.

CONSIGN TO A FUTURE AUCTION:
To consign to a future auction or to arrange a free auction valuation, please contact our picture specialists  on: +44 (0) 1635 553 553 | pictures@dreweatts.com or complete our free online valuation form here.