We’re used to seeing rare and unique pieces of ancient history passing through the halls of Donnington Priory. But when this funeral mask dating back to the Liao Dynasty (907-1125) was consigned to November’s Chinese Ceramics & Works of Art auction, experts from across our departments got very excited indeed. 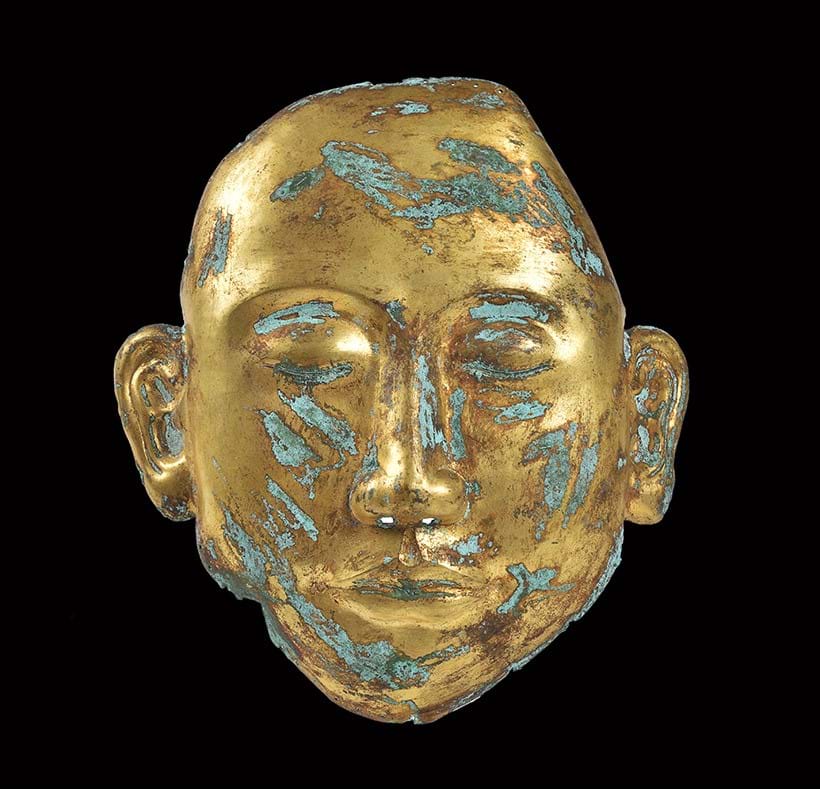 Funerary masks are well documented in many ancient cultures, including that of ancient Egypt and Greece, and are related to ideas of life after death.

They appeared very early in China: the jade masks covering the faces of the dead in the Eastern Zhou period (770–256 BCE) and the jade suits encasing the bodies of the departed imperial family in the Han dynasty (206 BCE–220 CE) were thought to serve as protection in the afterlife.

The rare gilt bronze mask consigned to November’s sale depicts the serene face of a male who was part of the elite Khitan tribe who ruled northern China over a thousand years ago. Funeral masks (or funerary masks, as they are often referred to) were a crucial part of the funeral ritual during the Liao Dynasty (907–1125).

The Khitan tribe would place the metal mask, along with other pieces of metal body attire, on high ranking men and women before they were buried.

Who was to be buried in the mask?

The Khitan believed that a metal mask and suit would preserve the deceased from decay, a burial tradition closely related to the tribal customs practiced in Russia, in the south of Siberia, and in areas to the west of China.

Placing a metal mask on the face of the deceased was a unique tradition of the nomadic Khitan; they buried their high-ranking men and women with various amounts of metal body attire such as a mask like this one for the face and a suit “woven” from wire for the body.

The quality of the metal used depended on the class of the recipient. The simplest were made of thinly hammered bronze. Silver, gilt bronze and high karat gold were usually reserved for the elite, which leads us to believe this example was fashioned for a high ranking male from the Khitan tribe.

About the auction - November’s Chinese Ceramics & Works of Art sale

About the auction
After close inspection of the mask itself and the Oxford laboratory report, our Chinese ceramics experts, Mark Newstead and Dr Yingwen Tao, have given the mask a pre-sale estimate of £1,500-£2,000 (+fees).

November’s Chinese Ceramics & Works of Art sale features over 350 lots, with estimates ranging from £100 to £10,000. To view all the lots please click here.