A highlight from our Modern and Contemporary Art auction on a 12 October is Lot 298, 'Three graces', made from Purbeck stone by British sculptor Emily Young (b.1951). It was exhibited by Thackeray Gallery in London, where it was purchased in 1995 and thence by descent to the present owner.

~ In the owners own words about Emily Young’s Three Graces, Lot 298

Originally from London, Emily Young spent her childhood between Wiltshire and Rome. As the granddaughter of the sculptor Kathleen Scott (a colleague of Rodin) and niece of conservationist Peter Scott, she grew up in a family of artists, naturalists, explorers and writers.

Her education started at Chelsea School of Art and Central Saint Martins in London, where she was first interested in painting. She left England in the late 1960s, travelling through Europe, Africa and the Middle East, then moving to the United States to study with artist Robert White. Emily developed an interest in working with stone in the 1980s, using leftover marble from a kitchen worktop.

Giving a human form to the stillness of the stone, the sculptures emerged from unique discarded stone found in quarries. Her sculptures brings forth the close link between human experience and the planet. They encompass the natural beauty, history and energy of material stone imbedded with human consciousness through the act of touching, carving, and giving form. The sculptures ask the viewer to consider their presence on Earth, their history and contribution to the future of the planet. The meditative quality of Emily Young’s work puts the ephemeral quality of human consciousness in perspective to the timelessness of stone. 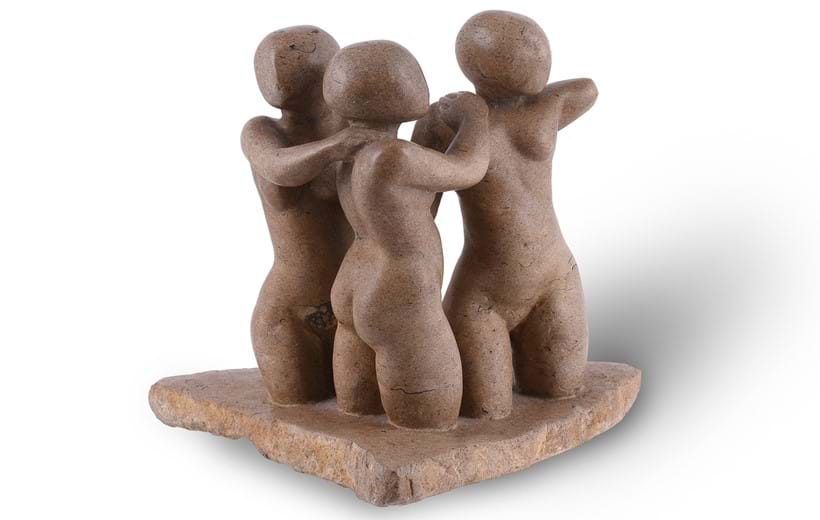 A passionate conservationist, she employs her sculptures in an environmental effort to protect endangered spaces. She has opposed the opening of a geothermal power station in Tuscany, as well as the illegal trawling in the Mediterranean with the project The Garden of the Fishes.

She has exhibited at many prestigious museums including: The Getty, California; The Imperial War Museum, London; The Whitworth, Manchester; The Meijer Sculpture Gardens, Grand Rapids, and in 2018, The Victoria and Albert Museum, London.

The present lot is one of Young’s earliest pieces. The work shows three female figures elegantly dancing through water. The piece was treasured by the owner throughout her lifetime. A wonderful and touching poem was written by the owner and is published on the previous page.