During our auction of The Collection of Sir William Whitfield CBE on 10 March 2020 many outstanding results were achieved, and some of the lots which really shone were the magnificent French and Flemish tapestries.

Historic textiles including tapestries and needlework have become increasingly popular at auction in recent years, and it is a trend we can get behind: not many things can evoke history as vividly as its fabrics. Textiles also shed light on centuries of rich manufacturing traditions by makers who are not usually very visible in the canon of art history and antiques, including women and girls. Dreweatts' Works of Art specialist Charlotte Schelling explains more.

The purpose of tapestries was often threefold: first and foremost they made a striking visual impact, like a great picture might. Secondly, their manufacture required a team of craftsmen and swathes of precious silk thread and sometimes even silver or gold, and as a result the commission of a cycle of tapestries was a strong claim of wealth and importance. Finally, and perhaps most practically, they provided warmth and insulation in draughty houses and castles.

One of the reasons I believe they have come back into fashion is that the current market adheres a premium to exceptional quality, and tapestries are usually incredibly intricate and well-made works of art. 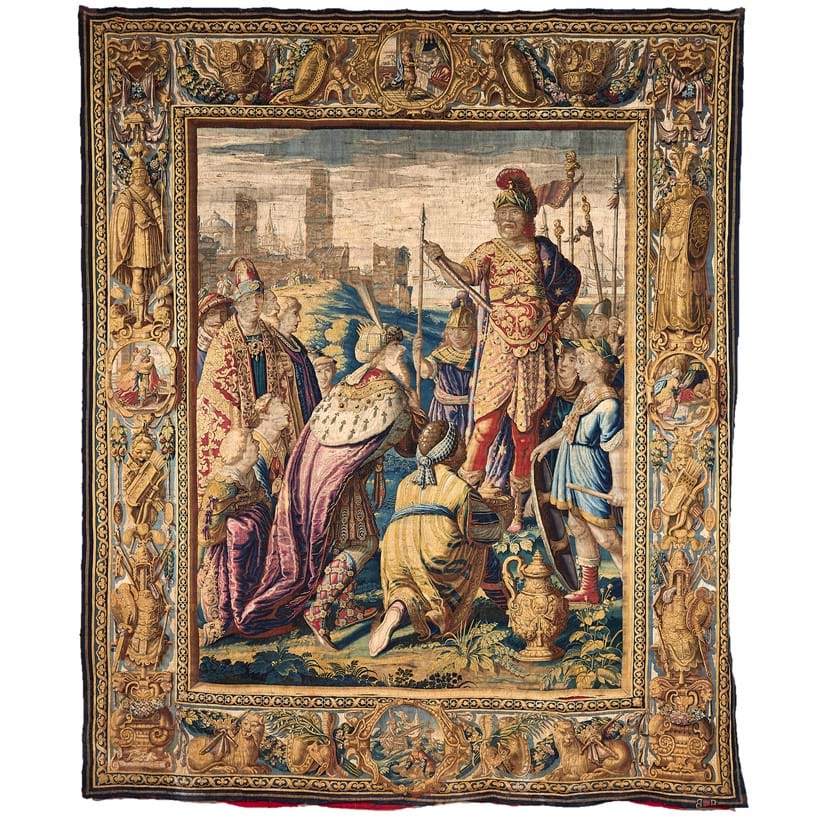 A Flemish historical tapestry, probably Brussels, after Karel van Mander II, second quarter 17th century, The Triumph of Mark Anthony over the Parhians, from the Mark Antony and Cleopatra cycle | Sold for £150,000 | The Collection of Sir William Whitfield CBE, 10 March 2020

Tapestries are also enjoyable to collect because in addition to providing wonderful texture to an interior, their scenes, workshops and designers can sometimes be identified. Tapestries especially in the 17th and 18th centuries were often designed by famous artists. The star tapestry from The Collection of Sir William Whitfield CBE sale for example, the Triumph of Mark Anthony over the Parthians was executed after designs by Karel van Mander II, who was a successful painter of the Dutch golden age and at one point court artist to King Frederick III of Denmark.

While this is a particularly grand example, tapestries of more playful subject matter were also often the work of talented and creative makers. See for instance the 18th century Aubusson panel of a pastoral feast sold in our recent European Furniture and Works of Art sale, which was to designs by Jacques-Nicolas Julliard, who had been a pupil of the influential painter François Boucher.

One tip for collecting tapestries is to pay attention to condition. Some colour fading and ripping can be expected, as over time the fibres weaken and the pigments used to dye the threads can alter with exposure to light. However, extensive moth damage, significant tearing or unsympathetic restoration can be harder to address. Finally, size does matter. As important works of art commissioned by royal and noble patrons, tapestries can be of monumental scale which does not work for every wall, so do bring a tape measure when attending an auction view!

Another category which has been in demand in recent auctions is embroidery. Needlework was mostly practiced by young girls and ladies of the genteel and leisured classes, and surviving works show great ingenuity in composition and expert craftsmanship. 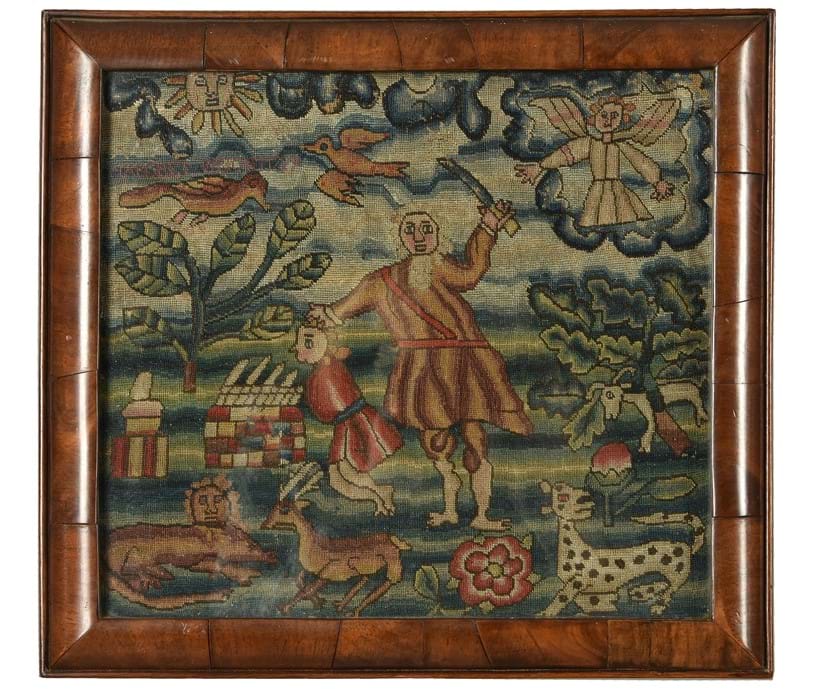 We recently offered a George II needlework panel of the Sacrifice of Isaac, signed Margret Wright and dated 1729, which was bold in its use of colour and innovative depiction of Abraham in contemporary dress. Its impressive £4,500 hammer price against a £700-1000 estimate shows the popularity of needlework in the current market.

The word ‘sampler’ is derived from the Latin ‘exemplum’, and is used to describe needlework fragments and panels that were made to record stitching and design patterns, used for reference and practice from the 15th century onwards. However the term is now most often associated with young girls’ needlework of the 17th, 18th and 19th centuries. Samplers were a key part of girls’ education and the process of mastering the craft of embroidery.

Earlier ‘spot’ samplers would show scattered patterns and images, while the later examples which most commonly appear on the market are composed of bands of letters, usually the alphabet or verses from the Bible. 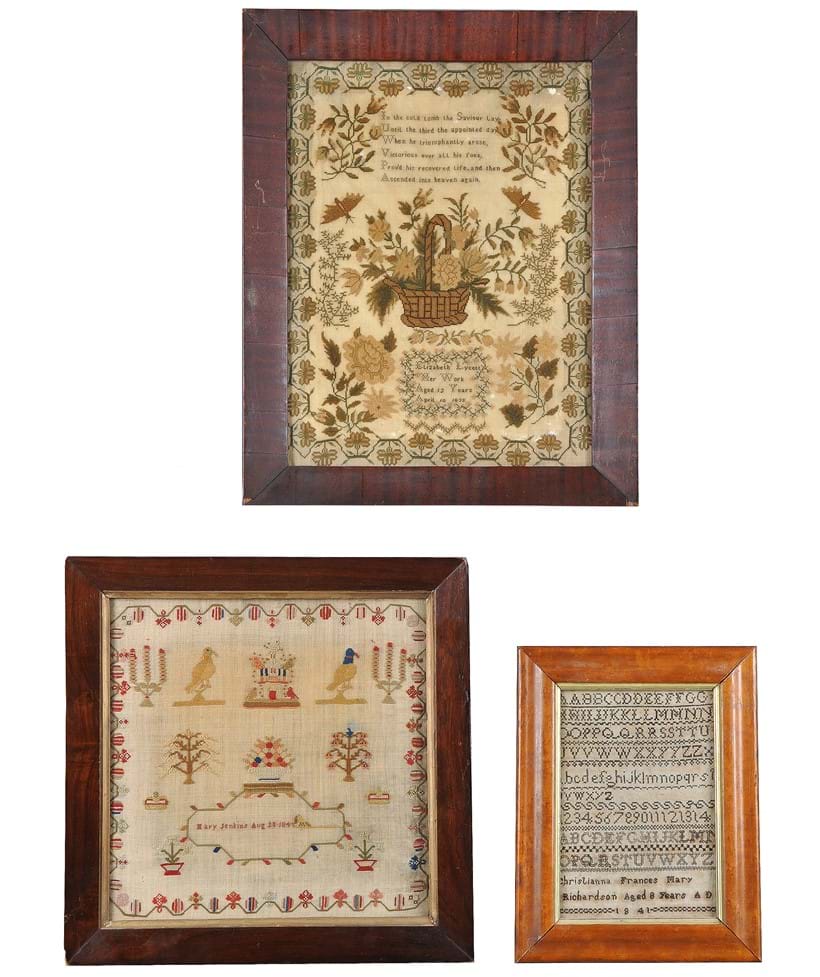 If you are starting a collection, this could be a brilliant area to build around as samplers can be very accessibly priced, often selling between £150-300 at auction (though especially elaborate or rare, early examples can fetch thousands). Note for example the lot of three which sold in a recent Interiors auction.

Key things to look out for when buying at auction are dates and signatures, which identify the maker by name and age and make a sampler more desirable. Added imagery such as animals or flowers adorning otherwise monotonous bands of letters can also increase the value of a sampler.

Needlework was a much-loved pastime with ladies of the upper and middle classes, and as a result many lavish antique implements, work boxes, caskets and sewing tables survive, providing us with a glimpse into the home lives and tastes of the women who practiced the craft.

My personal favourites are the stunning Anglo-Indian sewing caskets which were popular in Britain during the 19th century, made in exotic materials native to India such as sandalwood, shellac and of course ivory. Recent examples which have come up in our auctions include a gorgeous sandalwood casket probably from the Mysore region, carved with tiny flowers inside and out, and a Vizagapatam workbox which had decorative bands heightened with black ‘lac’ throughout.