Coming up on 18 & 19 May, we have our two-day Chinese Ceramics and Works of Art auction, including Japanese, Islamic and Indian Art. The auction offers ceramics and works of art reflecting the richness and breadth of China’s artistic heritage, with items including porcelain, white and coloured jades, scrolls, Thangkas, Buddhist art, lacquerware, bronzes, cloisonné, furniture and screens. Here Dreweatts Asian Art specialists, Mark Newstead and Dr Yingwen Tao, pick out some of their top lots from the auction. 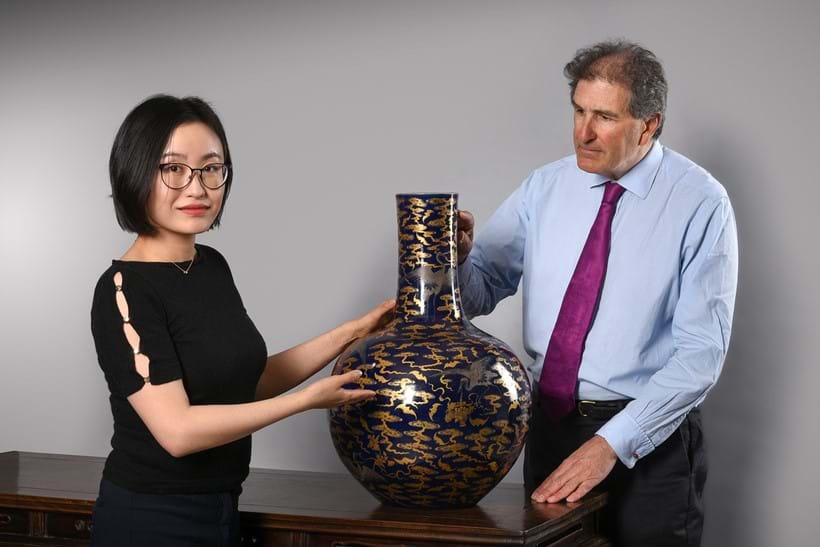 "This is a very fine and large example of an Imperial Tainqiuping vase made under Royal patronage for the Qianlong Emperor who demanded not only the finest porcelain but also constant innovation. This vase could have been made for his birthday, as the Qianlong Emperor was a devout Buddhist and a follower of Daoism. It features both an unusual and innovative combination of silver and gold and references Daoism with the silver cranes each holding an emblem for each of the eight Immortals." 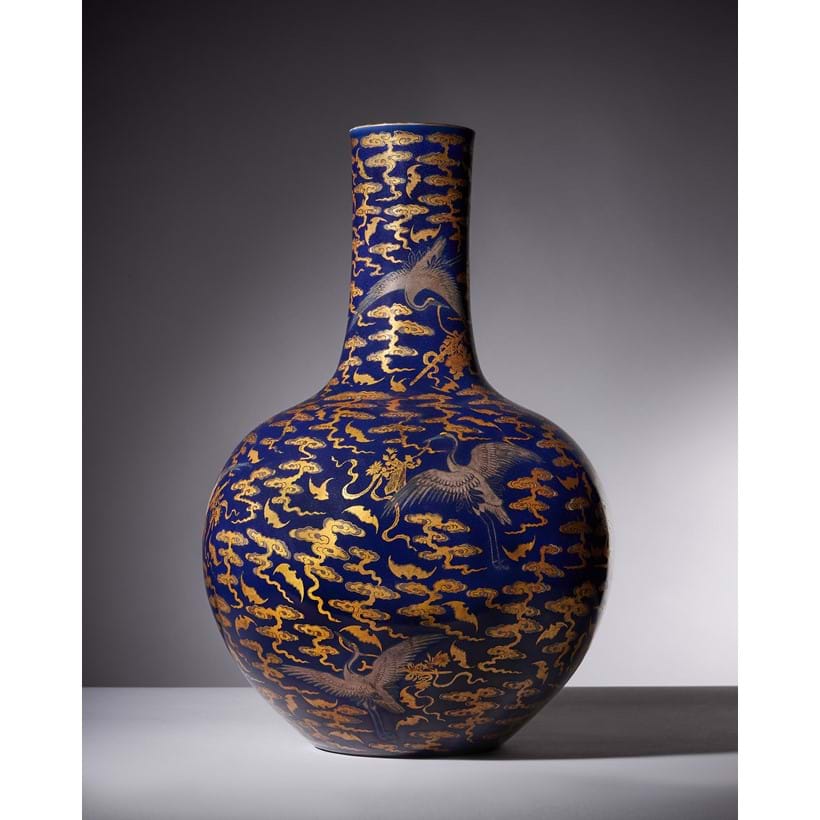 "This is a documentary example of a royal gift of an Imperial porcelain vase from the Emperor Xuantong to an Englishman Joseph B. Carson in 1923. The vase is sold with an accompanying letter by ‘Imperial Command’ thanking Mr Carson for his assistance in fighting the fire at the Imperial Palace. It is not only a beautiful vase but captures a moment in time of Anglo-Chinese history." 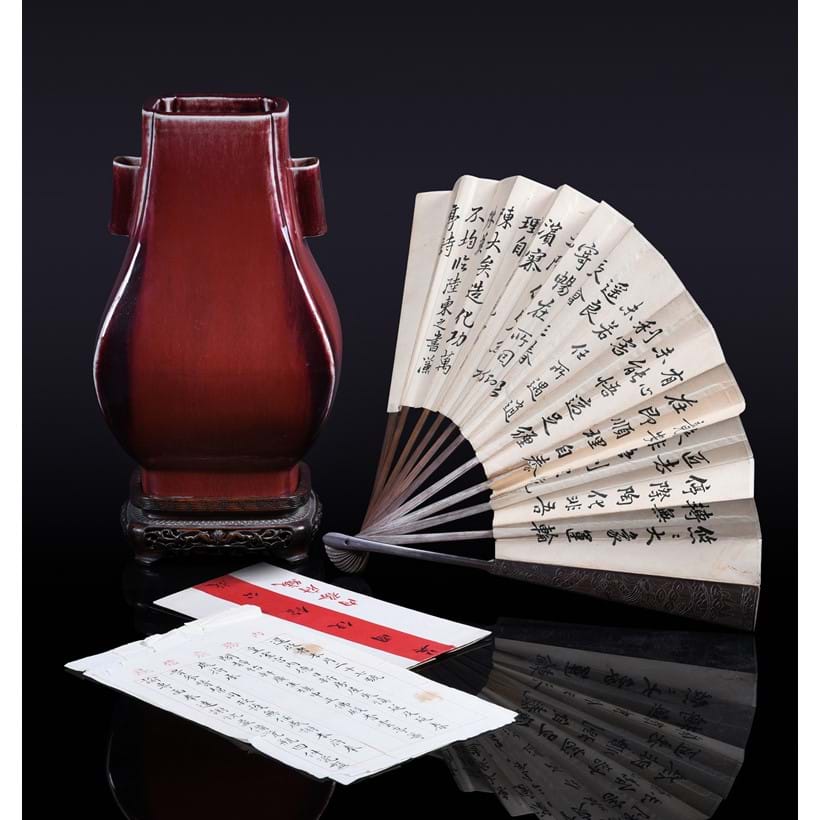 "This Chinese cloisonne brush washer is not only attractive, with a lotus pond design, but also almost certainly gifted to Mrs and Mrs Carson in 1923 as a wedding present by the famous Chinese socialite and style icon Oei Hui-lan known as Madame Wellington Koo. She briefly later became First Lady of the Republic of China from late 1926 until 1927."

"This is a fabulous album of 67 Chinese export china trade watercolours still in book form and as such are almost as fresh as the day they were first painted. There is superb variety of subject matter from botanical, to royal subjects as well as East India Company buildings in Canton painted as they were in 1835." 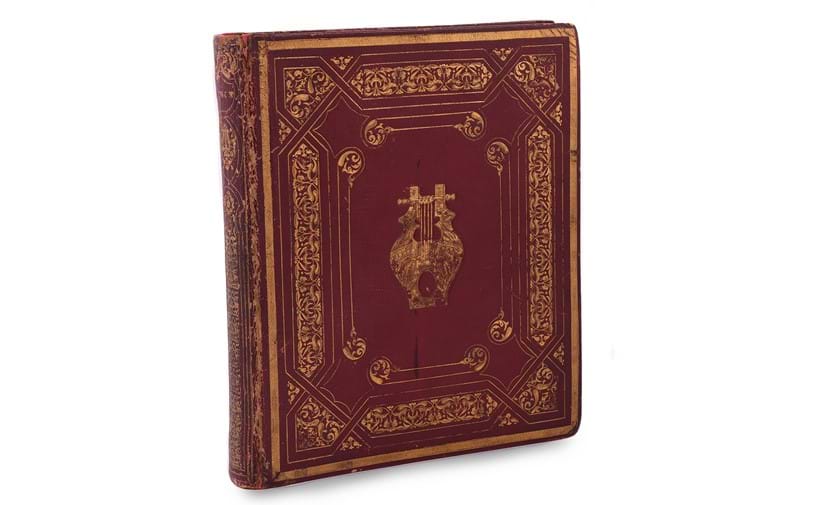 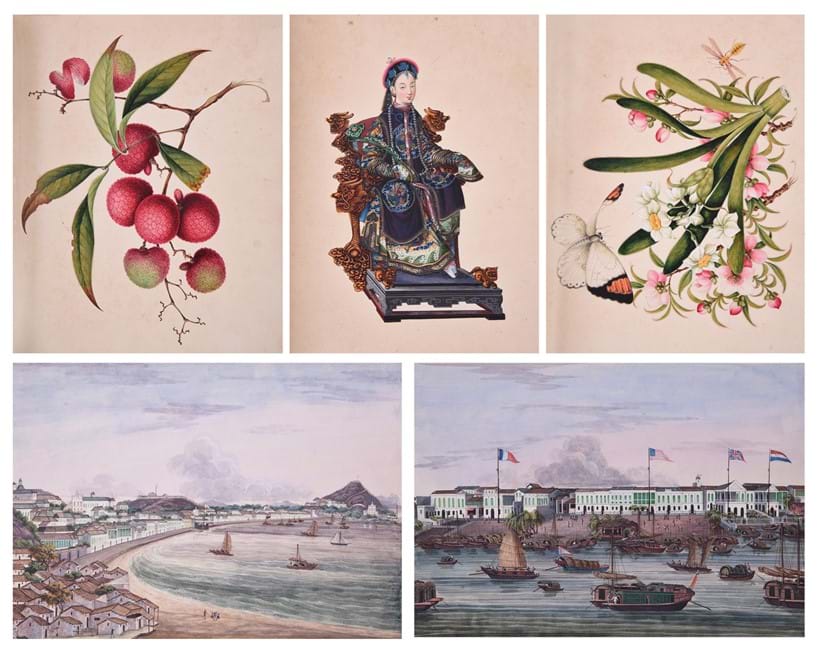 "The sale has a fantastic collection of Chinese textiles mainly from an American collection formed in the 1980’s and 1990’s, including this large silk embroidered ‘Immortals’ wall hanging depicting The Queen mother of the West flying on a Phoenix. This one has a striking central motif of a shou character signifying longevity and similar shou embroideries are found in the Imperial Palace Collections." 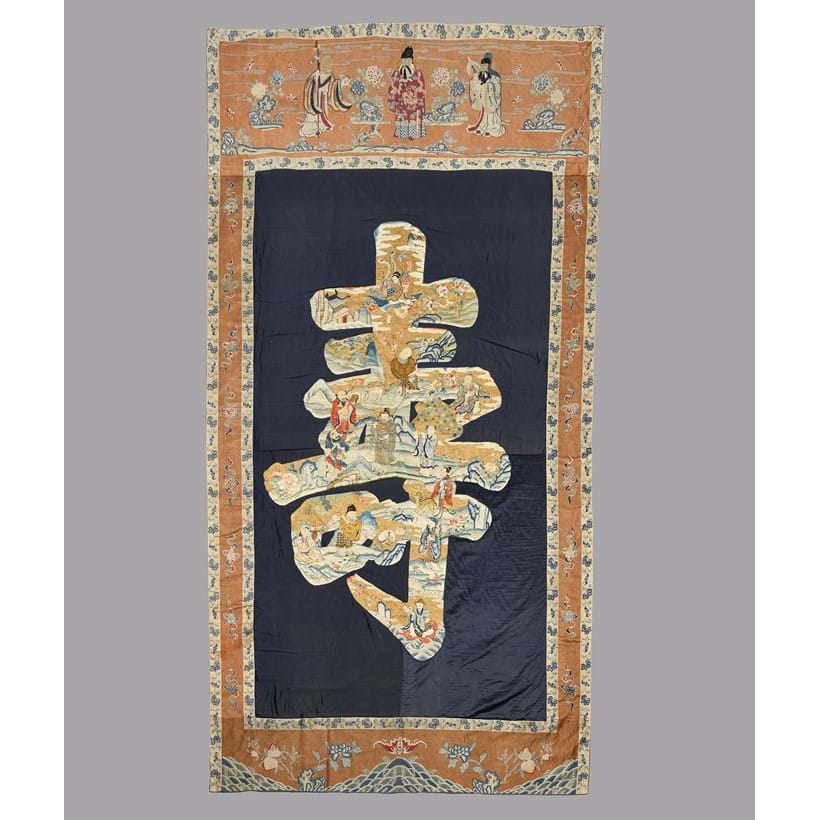 "One of the last great bargains in Chinese art are Tang figures and while some can be very expensive, many are still under-priced including this marvellous example of a groom deaccessioned from the Art Institute of Chicago and previously  gifted to them from the collection of Pauline Palmer Wood in 1969." 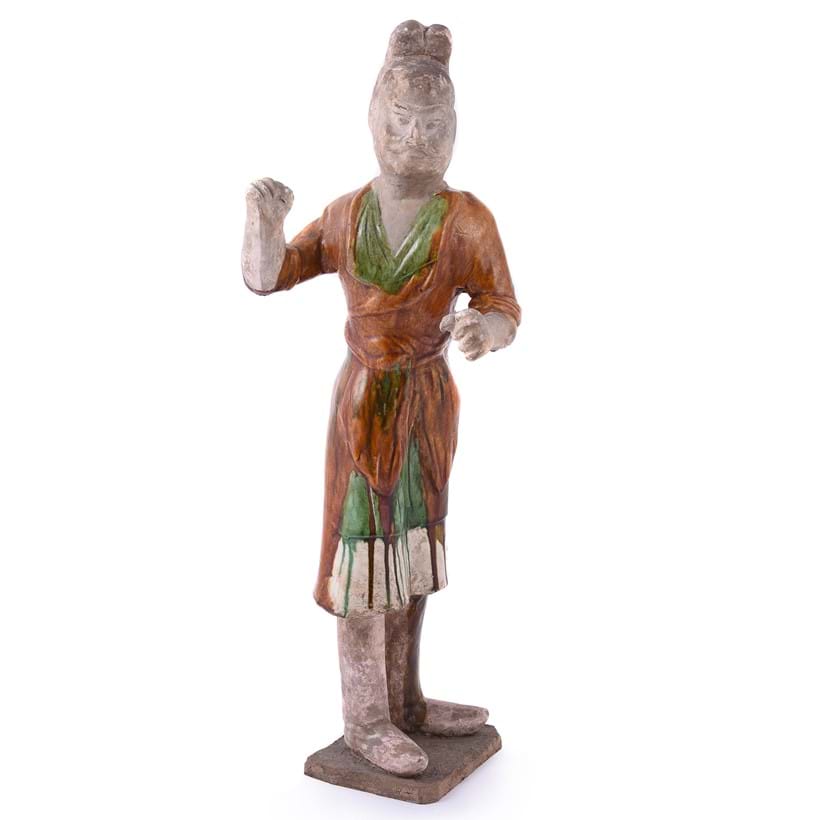 "Blue and white porcelain is loved by all and looks wonderful on mahogany furniture. However, this dish also tells a story of love and intrigue of a couple’s tryst in the Phoenix Pavilion where one man’s jealousy over his friend’s betrothed, leads to his loss of power and his eventual downfall!" 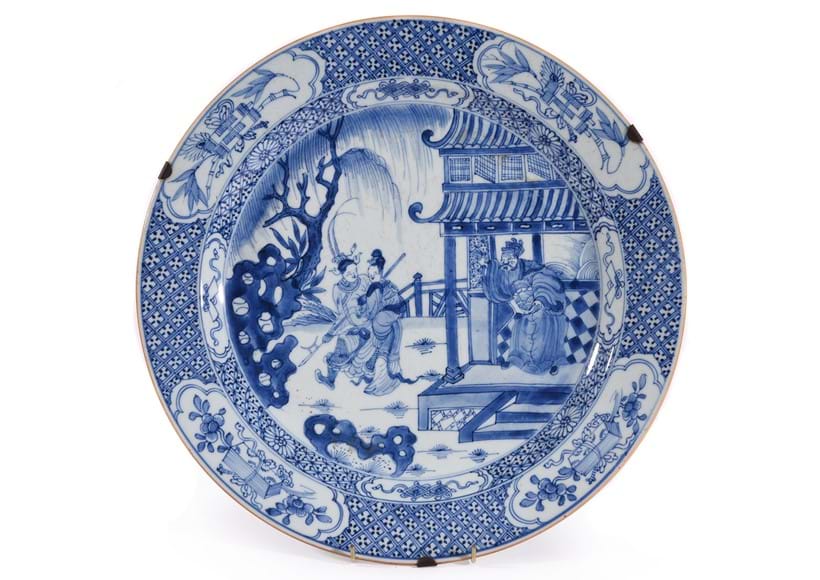 "This is a good example of Chinese blue and white porcelain dating from the Yongzheng period (1722-1735) which was a short-lived reign but noted for its fine porcelain. This vase is a large 18th century piece referencing the Yuan Dynasty designs." 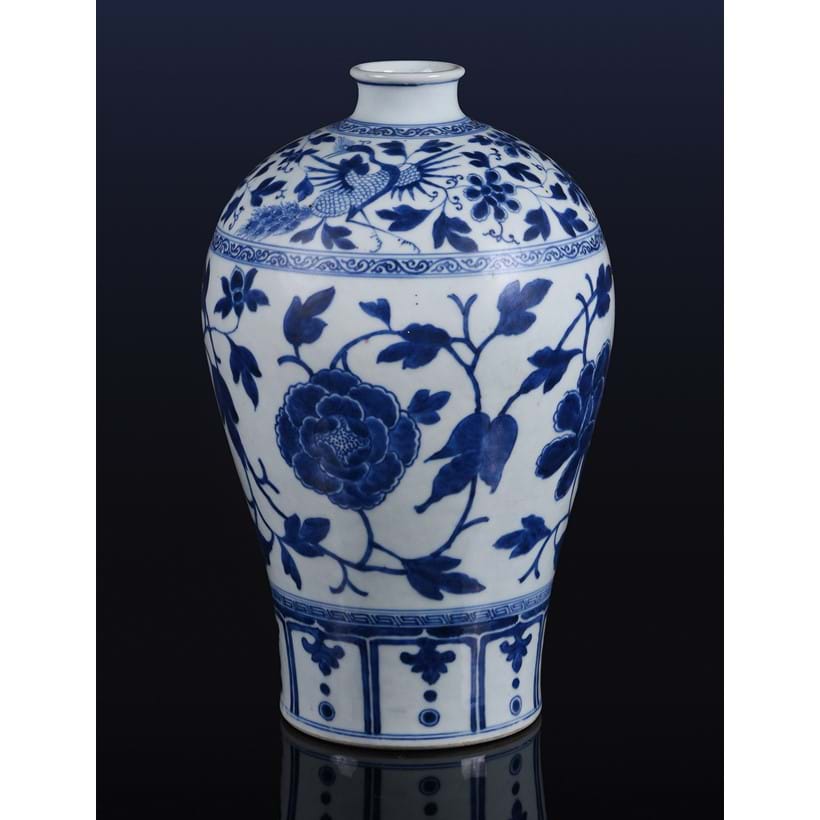 "Chinese export dinner services were commissioned by aristocratic English families in the 18th century in relatively large numbers, but this service is rare as it is documented in the will of the man it was made for, William Taswell (1708-1777). William Taswell was rector of Wotton-under-Edge in Gloucestershire, and in his will dated 3rd October 1775 he specifies ‘all such China in my possession as shall be found marked with my family’s arms’ is to go to my son George Taswell, who at the time was serving in India as Colonel of ‘The Madras Terribles.’" 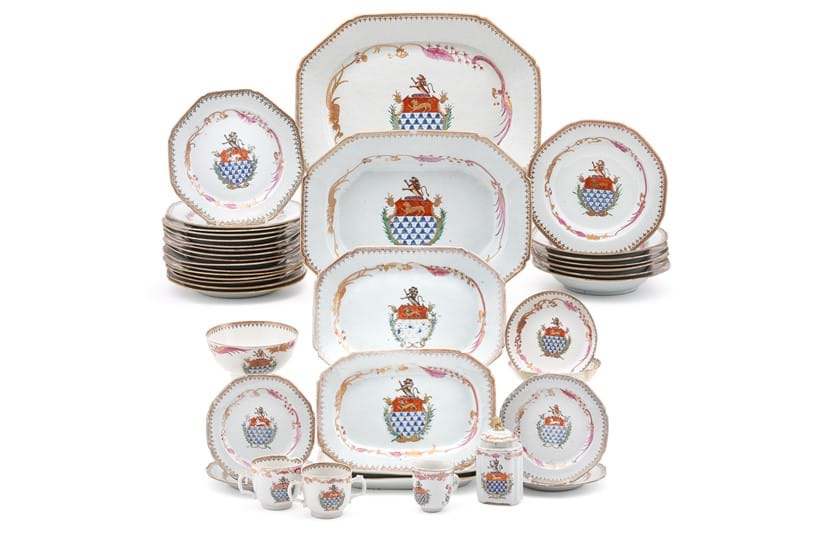 "Archer’s thumb rings were usually made of a hard material such as stone, horn, wood, bone, antler, ivory, metal, but this example is rare as it is made of porcelain and dates from late 18th century. The thumb ring is a piece of equipment designed to protect the thumb during archery and this attractive small survival has an intriguing old label that one speculates might have been from a royal inventory..."