On Wednesday 14 December, we have our Old Master, British and European Art auction. We are thrilled to include Lot 113, a wonderful group of sixteen drawings by late 17th/early 18th century Italian artist Pier Leone Ghezzi.

In the long history of Caricatures, it is Pier Leone Ghezzi (Italian 1674 -1755) who is thought to be the first to establish a reputation in this field of artistry. Known as 'il famoso cavaliere di caricature' he was then - and is now - best known for his pen and ink caricatures of various members of Roman society to which he dedicated himself in his later career. Here, Brandon Lindberg, Head of Old Master, British and European Art, tells us more about the works.

He was the son and pupil of Giuseppe Ghezzi, at the Accademia di San Luca in Rome - and so was encouraged to develop his skills as a draughtsman from an early age, and he painted many works for Pope Clement XI, who was to be one of his most loyal patrons.

Ghezzi's gently satirical portraits offer engaging impressions of 18th century Roman life, recording the activities of the common people as well as those in the upper strata of society, from high-ranking churchmen and aristocrats to the craftsmen, artists, musicians, and labourers who served them, as well as visitors to Rome including British Grand Tourists.

His earliest humorous drawings date from around 1700, and he continued to produce these works for the remainder of his career, selling them to collectors all over Europe, and some three thousand examples have survived, many of these caricature drawings were bound into albums, of which the most significant group is a series of eight volumes. Entitled by the artist 'Il Mondo Nuovo' and divided into different categories by subject or profession - and feature in the collection of the Vatican Library. Other albums of caricature drawings by Ghezzi are today in the British Museum, the Morgan Libary, the Kupferstichkabinetts of Berlin and Dresden, the Istituto Centrale per la Grafica in Rome, and the Hermitage in St. Petersburg.

Brandon Lindberg comments, "I think they are charming and absolutely wonderful. Each one is so characterful. Caricatures by Ghezzi come up from time to time at auction, but to find this number in one group is rare. Visually they work very well together, but individually they have their own identity and their own character. I think that what is so charming about these, is that they are not vicious, but very gentle and amusing caricatures. They give a wonderful flavour of the atmosphere of the city. Ghezzi's very keen eye and his very easy draughtsmanship, make them very appealing studies." 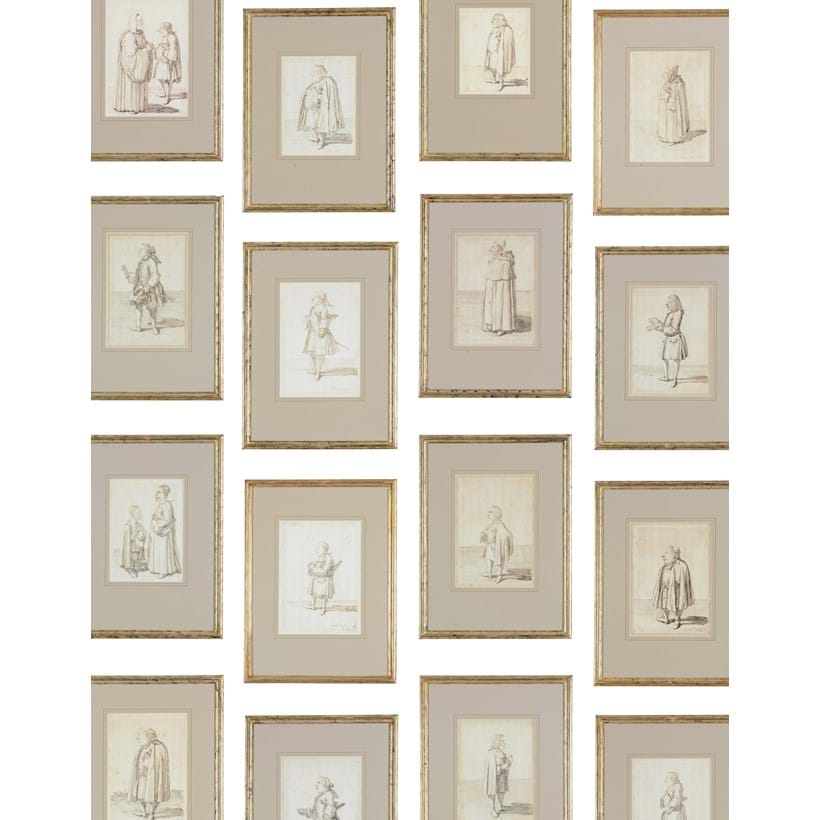 Some three thousand examples have survived, many of these caricature drawings were bound into albums, of which the most significant group is a series of eight volumes - entitled by the artist 'Il Mondo Nuovo' and divided into different categories by subject or profession - in the collection of the Vatican Library. Other albums of caricature drawings by Ghezzi are today in the British Museum, the Morgan Libary, the Kupferstichkabinetts of Berlin and Dresden, the Istituto Centrale per la Grafica in Rome, and the Hermitage in St. Petersburg.

Nineteen of the sheets in the present collection come from a group of 152 caricatures gathered in Rome and bound in the 18th Century as two albums, with each sheet annotated in French with details of the sitter. These albums were bought in Paris in 1763 by Richard Neville Neville (1717-1793), who as Secretary of the British Embassy was charged with negotiating the treaty with France that ended the Seven Years War. A note in Neville's hand on the flyleaf of each album records that they were bought on 7 April 1763 for 10 gns and 5 gns respectively. On Neville's death the albums passed to his son the second Baron Braybrooke, and remained in the family until they were sold at Sotheby's, London, 10 December 1979. The opening sheet of the Braybrooke album shows figures in the salone of Cardinal Melchior de Polignac (1661-1741), a gifted politician and scholar who was French ambassador in Rome from 1724 to 1730. It appears that Ghezzi met the majority of the characters featured in these albums at the Cardinal's house, which may help to explain the preponderance of Frenchmen and clerics. Antonella Pampalone, in her introduction to the 1979 sale catalogue, dates the group to the 1720's.