A Fashion Icon's Treasure Chest is Unlocked after 50 Years | Weston Hall and the Sitwells: A Family Legacy

A Fashion Icon's Treasure Chest is Unlocked after 50 Years | Weston Hall and the Sitwells: A Family Legacy

Jewels and fashion items from the collection of the famous English poet and writer, Dame Edith Sitwell, of the esteemed literary Sitwell family, are to be offered in our auction 'Weston Hall and the Sitwells: A Family Legacy' on 16 & 17 November 2021. The jewels and fashion pieces were extricated from Weston Hall in Northamptonshire, one of the Sitwell family seats of more than 100 years and an ancestral history dating back 300 years, and are among a spectacular array of important art works, furniture, ceramics, silver, decorative arts and an extensive library, that have been tucked away for centuries amongst nine attics and a maze of rooms (some untouched), for years. 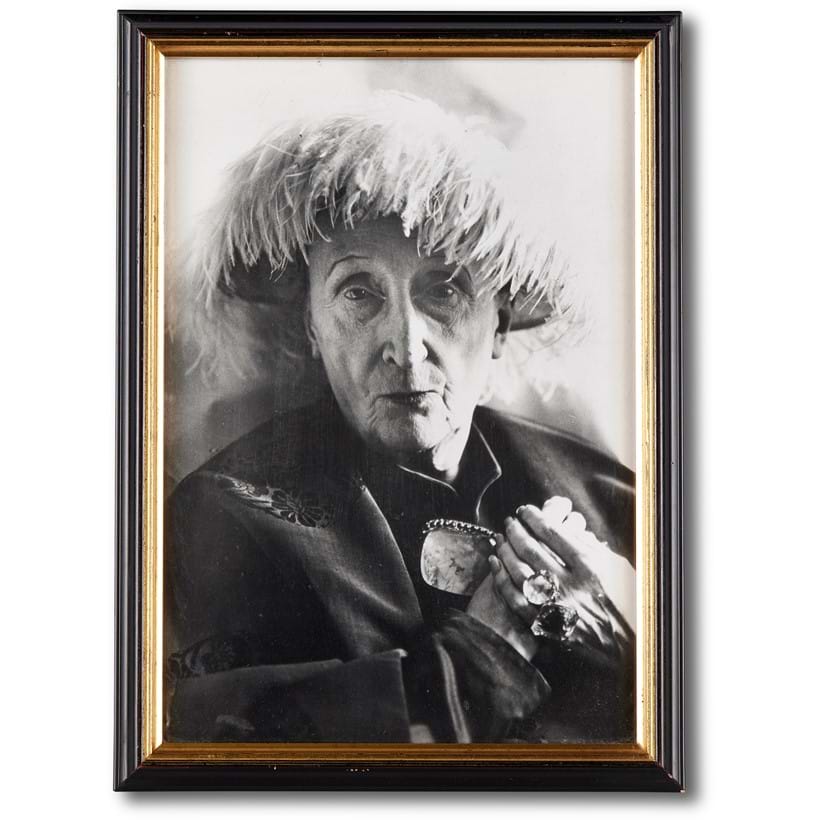 Edith Sitwell DBE (1887-1964) was known as a slightly contentious figure, which was highlighted by her first public performance in 1923 of her work Façades – a highly original work that combined her poetry with music and art. She also wrote popular historical works and a book on a subject very dear to her, English Eccentrics, published in 1933.

In the early part of the 1920s and 30s she was a central figure within the now famed young aristocratics group the Bright Young Things and it was within this group that the Sitwells would create life long friendships with some of the 20th century’s liveliest and most iconic writers, artists, musicians and photographers such as Cecil Beaton, Evelyn Waugh, Rex Whistler and Pavel Tchelichew. The Bright Young Things are now synonymous with their weekend flamboyant weekend country house parties. A purple velvet costume in the loose medieval style, late 19th /early 20th century, possibly worn by a young Edith at one of these parties is being offered in the sale with an estimate of £40-60 (+ fees). 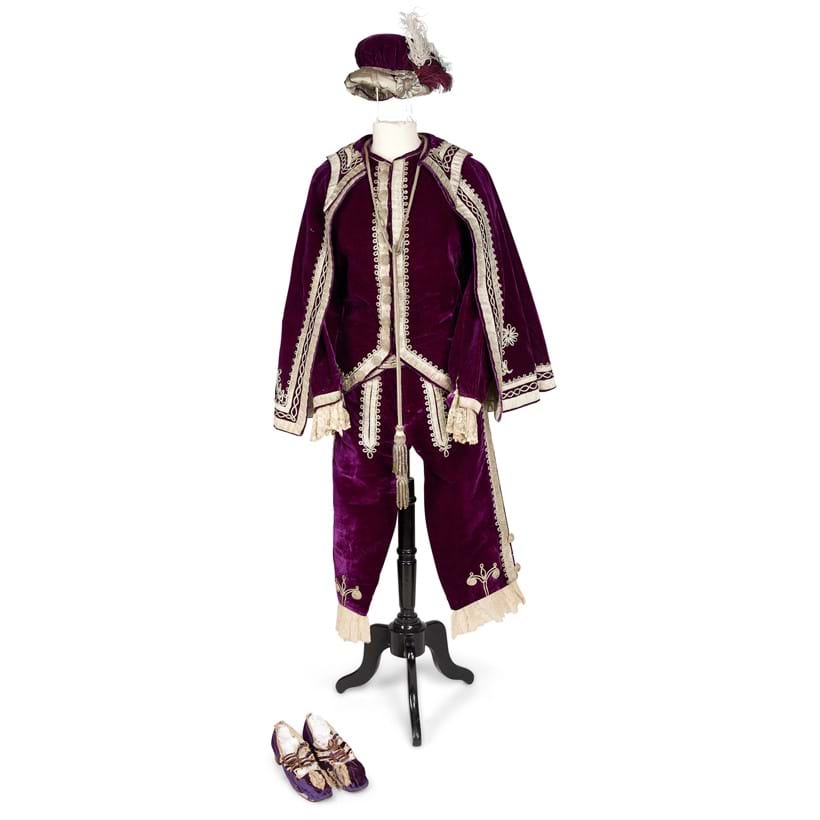 Alongside her writing, in later life Edith was known for her flamboyant, bohemian dress sense. Described by the Australian artist and great friend of Edith’s, Stella Bowen (1893–1947), as: “An altar on the move”, she often wore flowing gowns, hats, feathers and multiple rings. One of the current members of the Sitwell family, MasterChef judge and food & wine critic at The Telegraph, William Sitwell, tells us about an entry in Noel Coward’s diary describing an incident where, while on a visit to Weston Hall, Edith went missing after lunch. A search party was set up to look for her and she was eventually found amongst the cabbages! Noel Coward commented, “She couldn’t see where she was going on account of her hat!”

This particular hat, seen in the above print of a photograph by Edith’s great friend, the photographer Cecil Beaton, is being offered in the sale. The ostrich feather-trimmed hat, which became one of her most iconic pieces of attire, dates from the 1960s and is being offered alongside the Beaton print, with an estimate of £500-700 (+ fees). 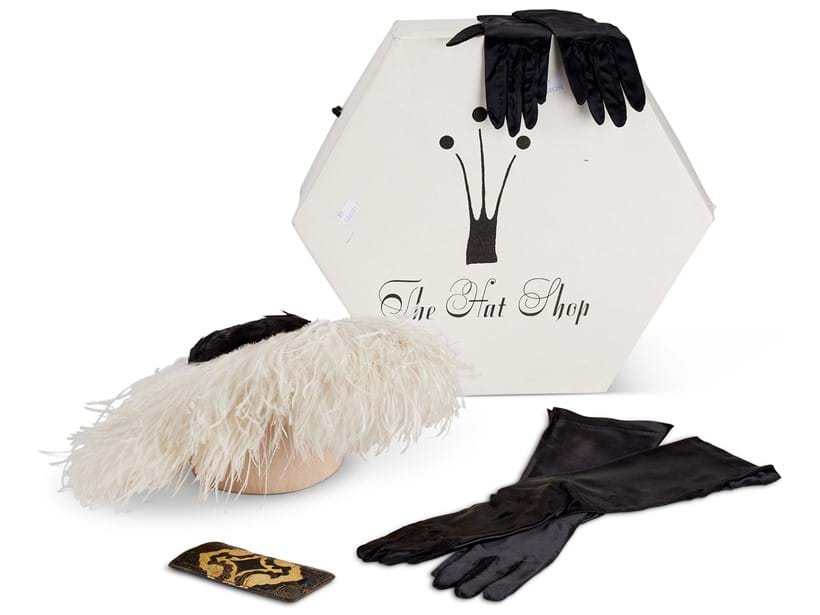 Joe Robinson, Head of House Sales and Private Collections at Dreweatts, said: “Dame Edith Sitwell was a woman with a cast iron integrity in her writing and a definite perception of self. This carried through to what she wore and the jewellery she chose, echoing what she believed to be her relationship with distant Plantagenet ancestors. She once quipped in an interview that she was ‘throw back’ and that people would ‘question the existence of the almighty’ should they see her in fashionable clothes. To Edith nothing was the new black ….“

“The beautiful 19th century Chinese semi-precious stone buckles reflect the loving and ever supportive relationship she had with her brothers - they were a gift from Sir Osbert Sitwell - and she wore these in multiple ways, as brackets and brooches and are worn in numerous iconic photos of her”

Her obituary in the New York Times in 1964 described Edith as: ‘…a woman of the past, who looked and dressed like a Tudor Monarch, or a figure out of a Medieval tapestry.’ It continued: ‘Dame Edith was six feet tall. An aquiline nose and heavy-lidded eyes added to her almost Plantagenet look, which she accentuated with elaborate hats, or turbans and long flowing gowns, sometimes of startling Chinese red, sometimes of intricate brocade. She was addicted to large jewelry and gold armlets, and her fingers were ringed with pebble‐size aquamarines’.

The outfits of Dame Edith’s being offered in the sale, certainly pay testament to the above. Amongst them is a plush gown that she wore to the premiere of the musical My Fair Lady in 1965. She attended the event with her nephew, Francis Sitwell, who recounted that her outfit and demeanour made such an impression, that the press spent more time gawping at her, than they did at the cast of the film! The silk brocade dress in black, pink and green carries an estimate of £80-100 (+ fees). 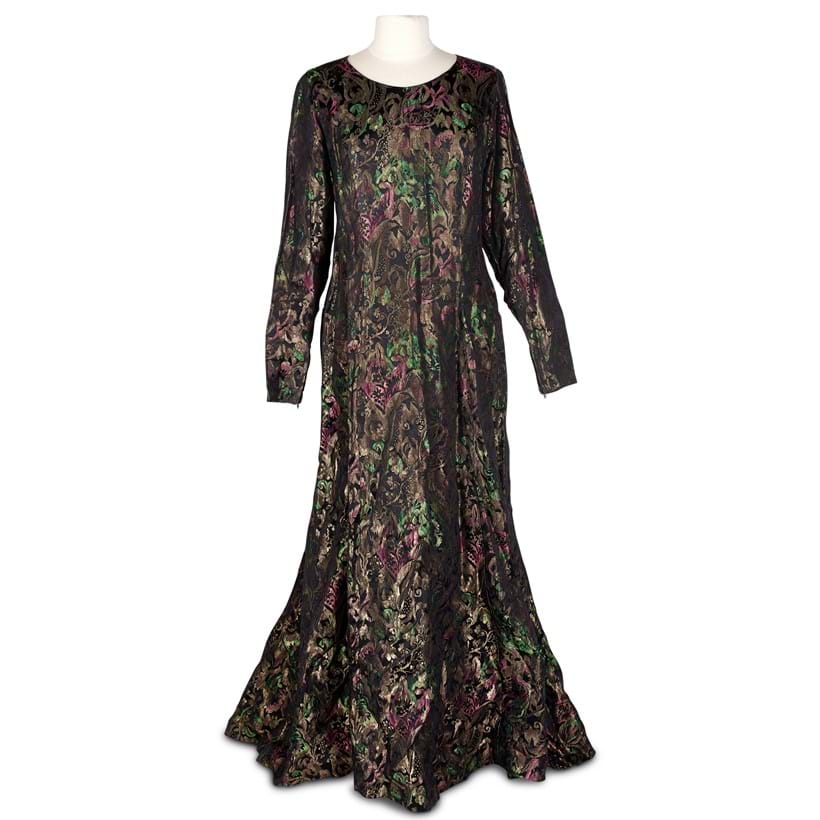 In 1950, Edith travelled to the United States where the American fashion, portrait and commercial photographer George Platt Lynes (1907-1955) photographed her dressed in a heavily patterned gown, (the photograph was offered at auction in 2011). A dress that matches the description and portrayal in the photograph, was one of those retrieved from Weston Hall and is therefore offered in the sale. It is a tunic form gown in a thick velvet, patterned damask and is estimated to fetch £100-150 (+ fees). 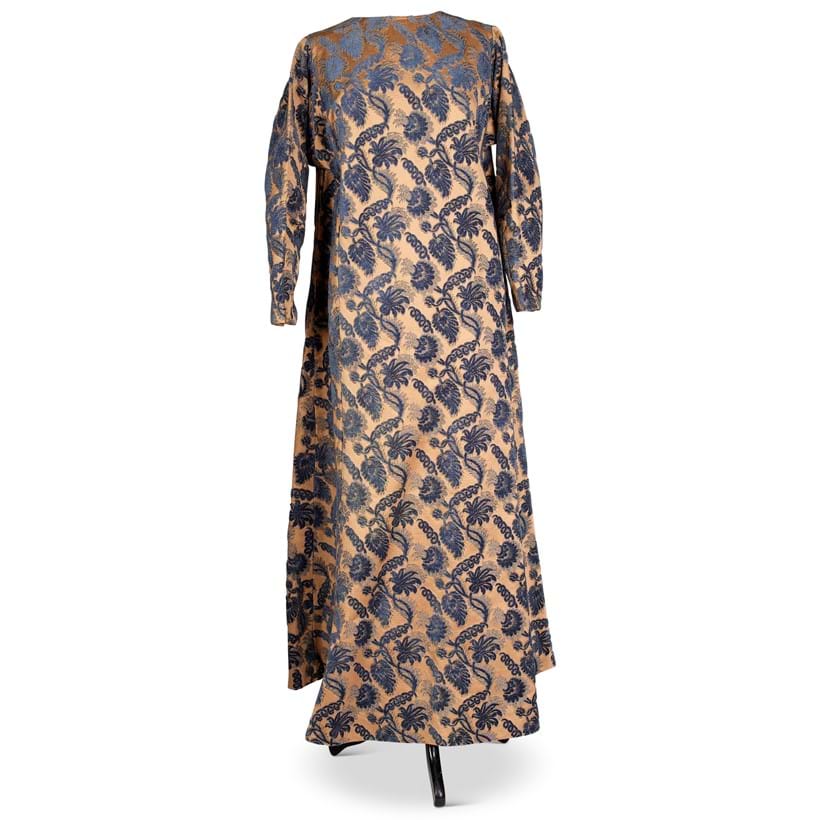 A custom-made celadon green silk and gilt metal brocade full length evening cape, possibly by Nina Astier, dating from the first half of the 20th century, features a stand-up collar and a pleated detail to the back. Highly dramatic, the style was formed by her life long friend Pavel Tchelitchew who designed ‘Plantagenet’ dresses for her in Paris in the early 30s but in later years she mainly designed her clothes herself. This particular piece was worn in another portrait by George Platt Lynes in 1950. It is estimated to fetch £80-100 (+ fees). A vibrant custom-made scarlet velvet dress features cream and gilt metal brocaded silk panels. It is estimated to fetch £100-150 (+ fees). 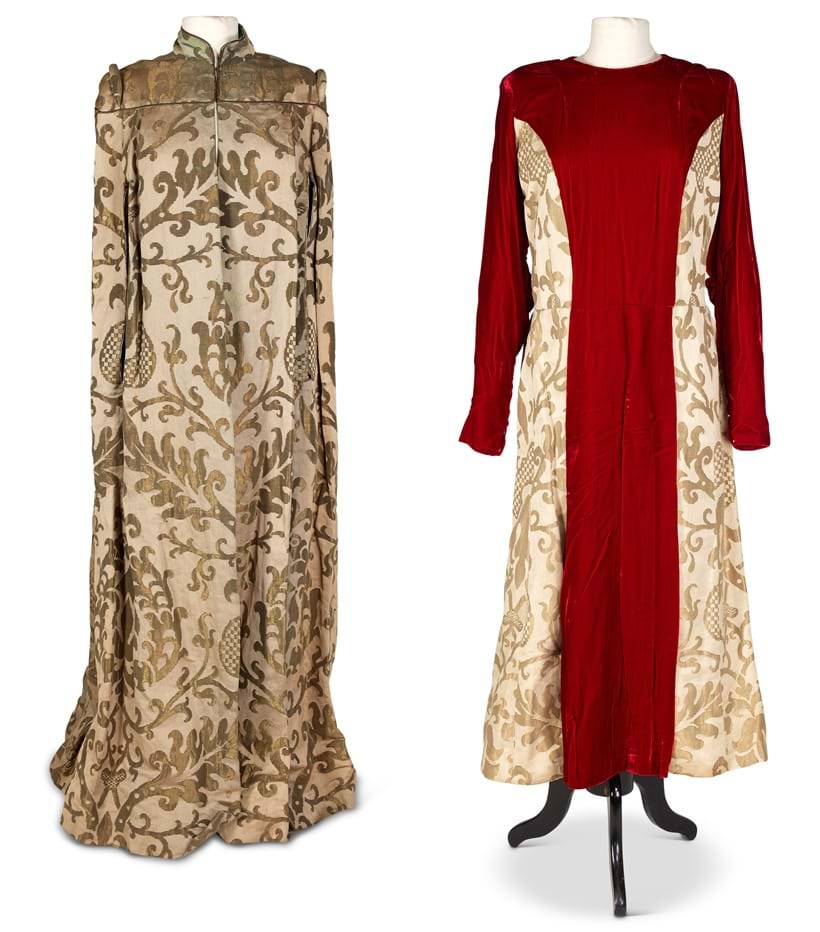 Edith was known for her love of wonderful hats and several of them appear in the sale, including a black broad-brimmed hat with a bow and hat pin, estimated to fetch £100-150 (+ fees) and a black glazed raffia and gauze hat with a turned-up rim and hat pin, also estimated to fetch £100-150 (+ fees). Clearly nothing was ‘the new black’ for Dame Edith.

Among Edith’s jewellery in the sale is a carved fluorite dress ring featuring two mythical beasts, described by The National Portrait Gallery in the 1994 exhibition titled, The Sitwells and the Arts of the 1920s and 1930s, as of 19th century Chinese workmanship and is believed to have been in Edith's possession by 1950. It is estimated to fetch £800-1,200 (+ fees).

A selection of eight Qing Dynasty, 19th century Chinese gilt-copper mounted semi-precious stone and jadeite brooches, converted from buckles are believed to have been brought back from China as a gift, by Edith’s brother Osbert Sitwell in 1934. In true Edith style she wore these as jewels with various outfits! The group is estimated to fetch £3,000-4,000 (+ fees). An attractive pair of silver gilt Indian bangles featuring floral decoration were a firm favourite and worn regularly by Edith. They are estimated to fetch £700-1,000 (+ fees) for the pair. 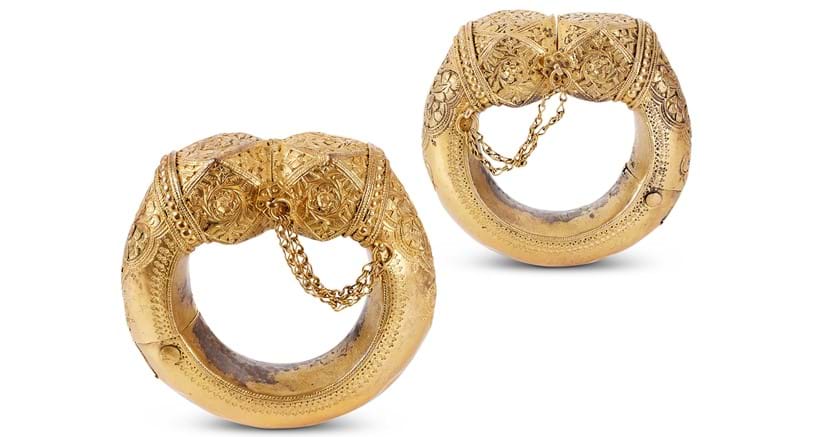 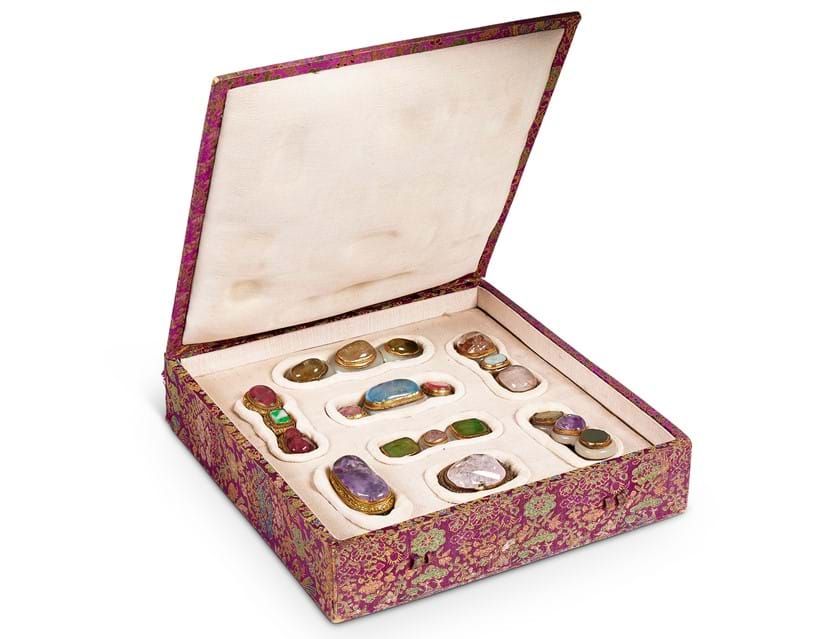 From earlier in the Sitwell ancestor’s journey at Weston Hall comes a selection of mourning jewellery, which first appeared in the 1600s, but was most popular in the Victorian period, during the 1800s, when Queen Victoria mourned the death of Albert. Its’ popularity continued through the Georgian period, but was more macabre, sporting motifs, such as skulls and skeletons, as a reminder of death and to live life to the utmost.

Among these pieces is a striking 18th century mourning ring bearing a dedication to Francis Sitwell, who died in 1773. The gold ring features a central rock crystal panel above an enamelled skull, between two old mine cut diamonds. Francis Sitwell (1659-1732) was born in 1659 and is buried in Eckington, Derbyshire, where in the list of burials of 1732 he’s described as 'Francis Sitwell Esquire Merchant from London' in the list of burials. It is estimated to fetch £1,000-1,500 (+ fees). 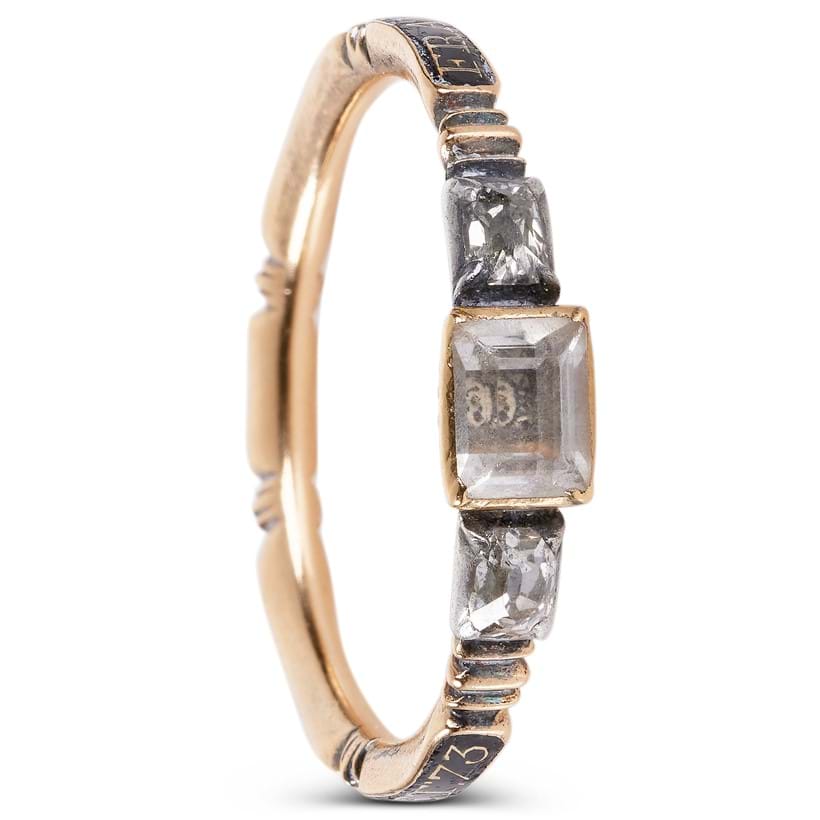 Continuing the mourning theme is a remarkable gold George III amethyst, enamel and hairwork mourning ring dating from 1760. The ring contains a braid of hair in a surround of faceted amethysts and its’ white enamel shank bears a dedication to Mary Barnardiston, an ancestor of the Sitwell family. The ring is estimated to fetch £400-600 (+ fees). A small selection of 18th century hairwork mourning jewels and hair mementos also appear in the sale, with an estimate of £600-800 (+ fees). 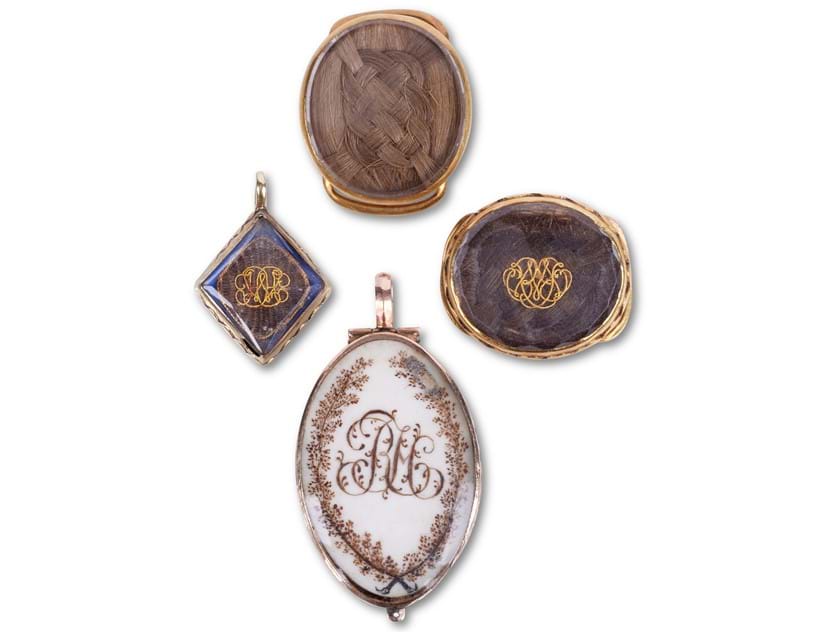 Joe Robinson, Head of House Sales and Private Collections and Head of Sale, says “The skill of the 18th century jeweller is evident with its central rock crystal panel above an enamelled skull, between two old mine cut diamonds and detailed dedication to Francis Sitwell, who died in 1773, in gold amid a black and white enamel ground.”

ENQUIRIES:
The catalogue will be available and online in October. If you wish to purchase a printed catalogue, the cost including postage is: