On 16 & 17 November, Dreweatts are delighted to be offering the contents of Weston Hall in Northamptonshire, a seat of the illustrious Sitwell family since the early 20th century and their ancestors since the 18th century. This spectacular sale charts the history of an eminent family of esteemed writers, eccentrics, pioneers and creatives through the centuries. 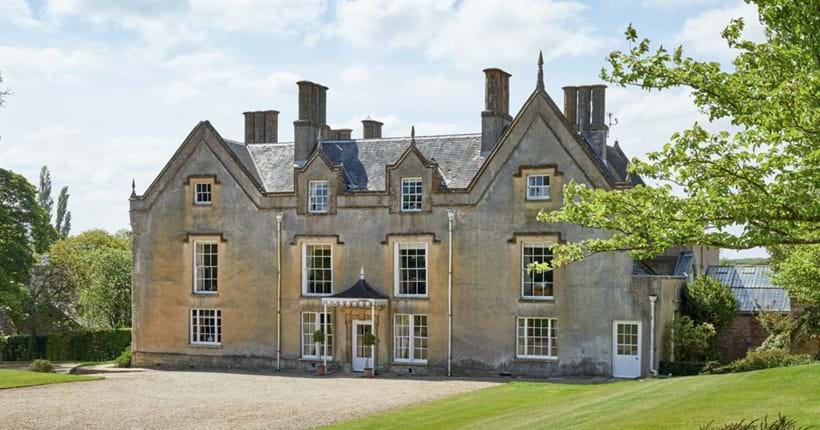 As some parts of the house were untouched since various generations of the family left, it has been a treasure trove of exciting discoveries that tell their own story of Weston Hall, alongside the people who occupied it and their passions for collecting, writing and creating. Weston Hall is a veritable time capsule of British history, with its 18th-century library, 19th-century Justice Room and Victorian conservatory. 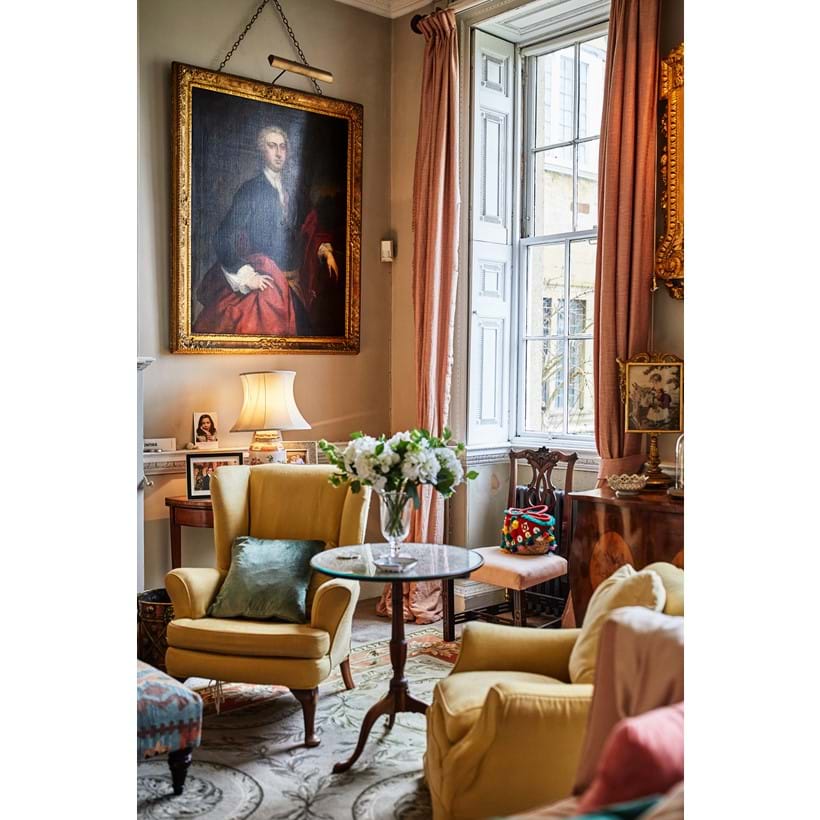 One such discovery was of Dame Edith Sitwell’s clothes in the attic, which are included in the sale, alongside some of Edith Sitwell’s jewellery. A large rusty old trunk in one of the house’s attics revealed love letters from several women, to a married soldier in the 1800s, believed to be Colonel Henry Hely-Hutchinson, who had lived at Weston Hall with his wife Harriet Wrightson. The Colonel had a romantic affair with Napoleon’s younger sister Pauline Borghese (1780-1825), who sent love tokens to him, which were found in the house, including a fan and a pair of kid skin gloves in a walnut shell. Having fought at the Battle of Waterloo, it seems strange for the Colonel to consort with ‘the enemy’, but William Sitwell explains that history shows us that this was actually not unusual and that it was even considered appropriate on occasion to dine with the enemy before a battle! Among the Colonel’s other great love affairs was one with a Countess from one of the wealthiest families in Poland. He must have made quite an impact, as on her death she left her entire estate to him.

Amongst other wonderful finds in the house is a series of books from the 17th to the 18th centuries that have their own place in the library at Weston Hall throughout the centuries. It is comprised of recipes for both cooking and ailments, as well as general tips for maintaining a home. Each lady of the house from the 18th century onwards added their own personal tips and recipes to help the next. 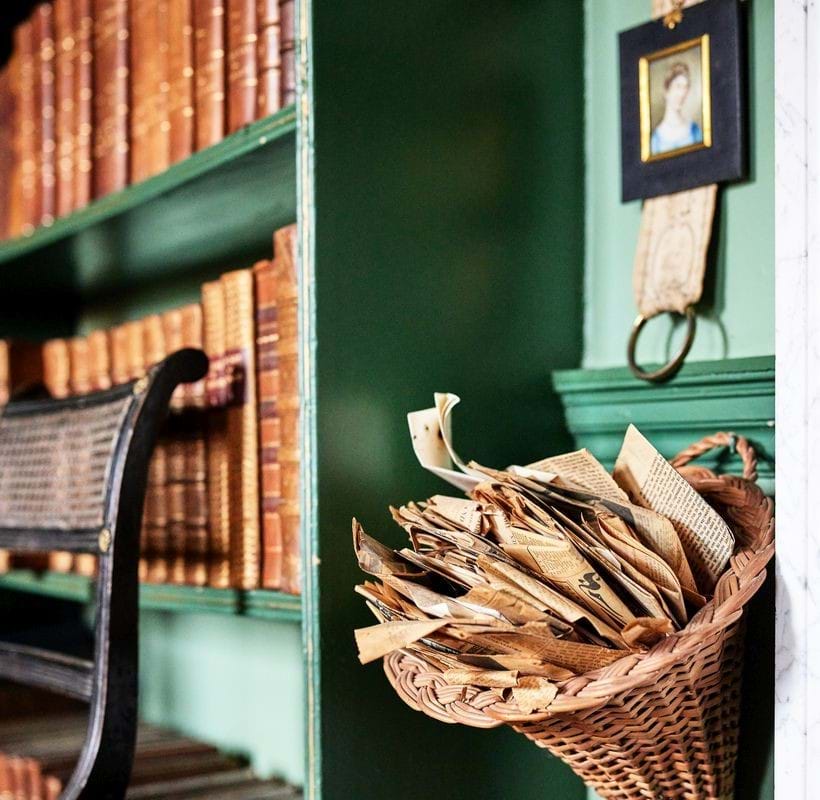 While some of the personal items have been saved as keepsakes to pass on to future generations, this unique sale will offer a wonderful opportunity to purchase many spectacular works by important artists that have been in the same family collection for many years, as well as exquisite furniture, ceramics, silver and textiles amongst other objects that have never come to market.

While stories abound, one particular story involves a burr walnut William and Mary style cabinet-on-chest with fitted interiors. William Sitwell and his mother relay the tale of how Susanna Jennens, who was the first of the Sitwell ancestors to occupy the house in the 1740s, had a dream that was so vivid, she wrote it down. In the dream Susanna recounted receiving a note to say that her sister had suddenly died. The note mentioned a secret drawer in the cabinet that had some valuable jewellery hidden in it. Susanna popped the note into a bedside drawer, recounting the strange dream to a friend a few days later, then forgetting about it. Two years later Susanna did indeed receive a note to say that her sister had died. Her friend reminded her of her dream and they immediately set about finding the secret drawer in the cabinet, unsure if it really existed. Eventually they found it and sure enough tucked away inside were some valuable jewels. The cabinet still features Susanna’s note in the drawer and will be offered in the sale with an estimate of £2,000-3,000 (+ fees). 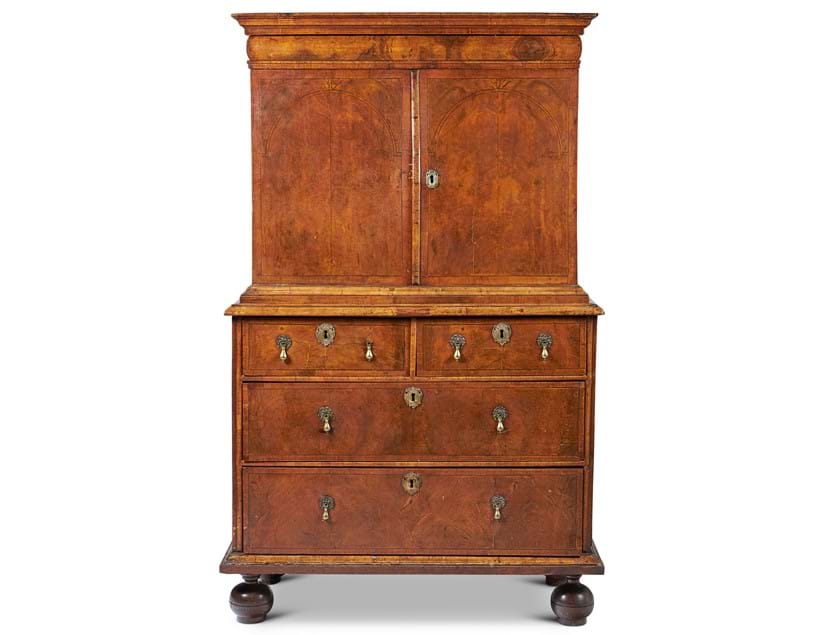 Also worthy of note is an ebonised oak four-poster bed incorporating decorative George III needle work hangings. The stunning crewel needlework, carried out by Susanna Jennens, was popular in the 17th and 18th centuries and is a technique that is over a thousand years old. This bed comprises a spectacular example of the craft, with detailed floral sprays and a basket of flowers on the headboard. Highly decorative, the bed has ribbon-tied floral drapes and a tester with twin columns, which is joined by a ribbon-tied swag, as well as an ornate pelmet and valance in crewel work needlework. The needlework was carried out by Mrs Jennens in the 18th century and comprised a full suite of furniture for the room. In the 19th century Georgia, Lady Sitwell used the curtains, also in the same crewel work, to cover a set of chairs that adorned the room. The impressive bed was housed in a bedroom particularly favoured by Dame Edith Sitwell on her visits.

William Sitwell tells us that according to the family, “It was on the grand bed that Edith Sitwell could be found, while visiting the family at Weston Hall. She would sit regally in bed propped up by so many pillows, her head adorned by some sort of turban and on a blue tray (still in the family), she would write her poetry.” The bed will be offered in the sale and carries an estimate of £8,000-12,000 (+ fees). The set of six George III side chairs with fluted legs are estimated to fetch £5,000-8,000 (+ fees). 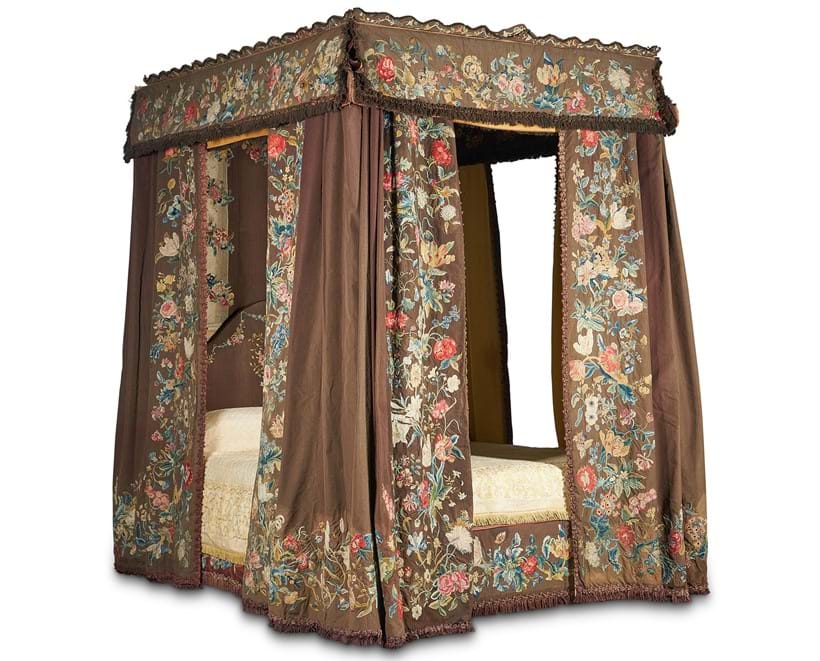 As well as being quite an eccentric character, Edith Sitwell was known for her bohemian dress sense. Described by her brother Sacheverell Sitwell as ‘an altar on the move’, she often wore flowing gowns and hats, feathers and multiple rings. William Sitwell tells us about an entry in Noel Coward’s diary describing an incident where, while on a visit to Weston Hall, Edith went missing after lunch. A search party was set up to look for her and she was eventually found amongst the cabbages! Noel Coward commented, “she couldn’t see where she was going on account of her hat!” One of her favourite hats is being offered in the sale, this is the famous hat she wore during a sitting with Cecil Beaton. A statement feather trimmed hat in Christian Dior style, which dates from the 1960s and is estimated to fetch £30-50 (+ fees). 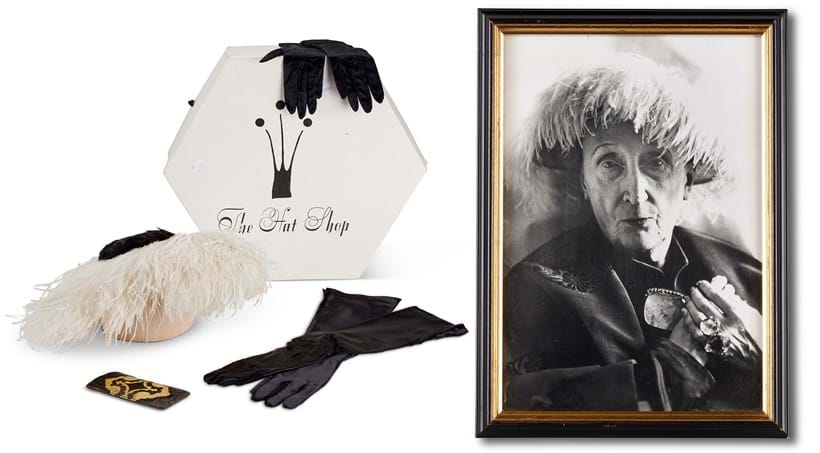 There are several pieces of Dame Edith’s clothing and jewellery in the sale, including a plush gown that she wore to the premiere of the film My Fair Lady in 1965. She attended the event with her nephew, Francis Sitwell and Francis recounted that her outfit and demeanour made such an impression that the press spent more time gawping at her than they did at the cast of the film! The silk brocade dress in black, pink and green carries a conservative estimate of £80-100 (+ fees). 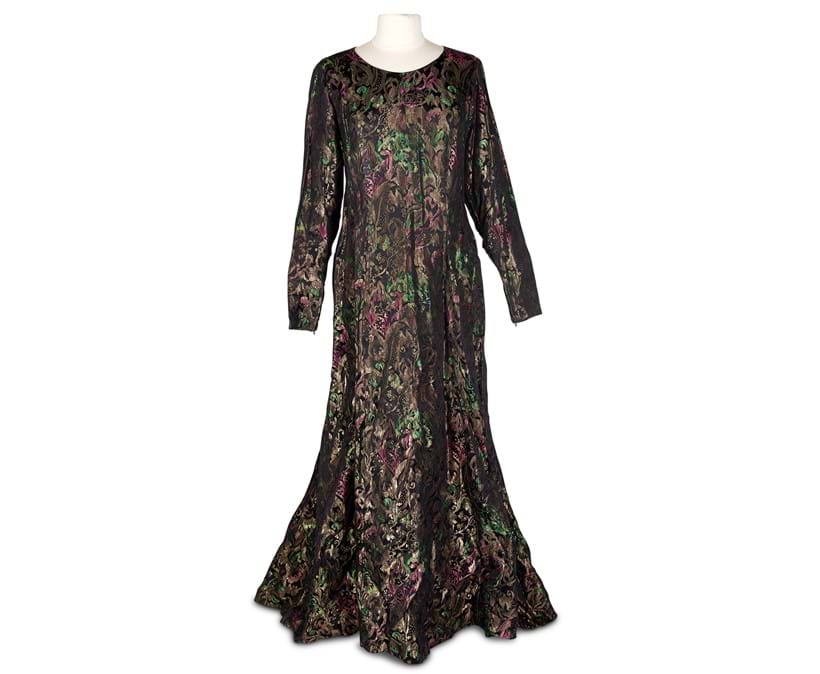 The catalogue will be available and online in October.  If you wish to purchase a printed catalogue, the cost including postage is: