We recently asked our Fine Art specialists Jennie Fisher, Lucy Gregory and Francesca Whitham what their top lots are since joining Dreweatts. Here they give you their favourite artworks and what it was about them that made them so special.

It is rare to find a gem such as this just unexpectedly come through the door.  Whilst the vendor knew who the artist was, she had no idea of the value or significance of the piece and it is always so rewarding to be able to surprise a client. Works by Indian artist Francis Newton Souza do not come onto the market very often and the subject of the work along with the provenance made it very special. It also clearly appealed to buyers as it went on to make over four times the pre-sale low estimate. ~ Jennie Fisher, Head of Pictures 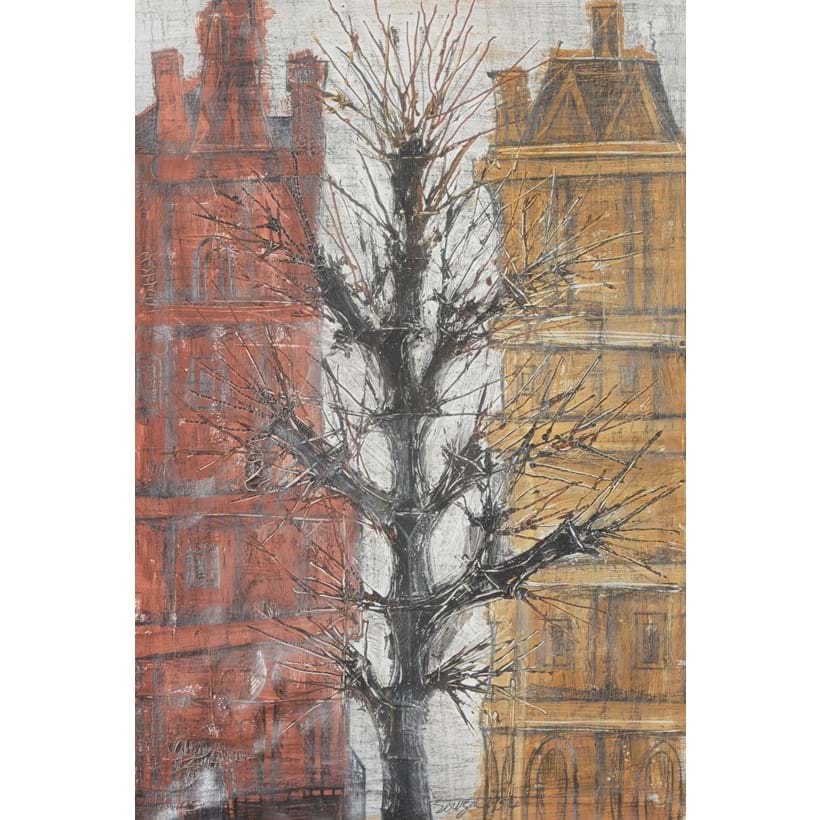 Jan Dirksz. Both | A view of the Ponte Molle at dusk

Not only did this work come from the superb Oakley House collection which comprised a significant group of paintings from across the centuries, but this work proved to be a very fulfilling research project. Works by Both are fairly rare to the market and whilst we see large numbers of old master paintings at Dreweatts, he was not an artist we had handled before. Following the provenance and literature trail of this picture was like putting together a jigsaw puzzle and it was very satisfying when all the pieces came together. Again we were rewarded with a very strong price making all the hard work worthwhile. ~ Jennie Fisher, Head of Pictures 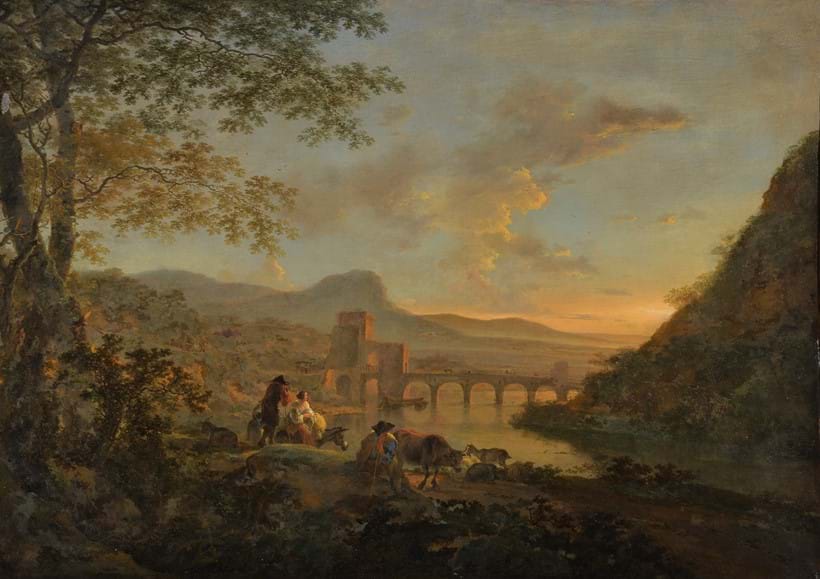 This was one of a series of works by the artist that came from the Collection of Swiss gallerist, Jan Krugier. It was an enormous privilege to be able to work on this collection which formed part of one of the most significant collections of the 20th century. Work by Fehr is not common at auction in the United Kingdom and it was really interesting to learn a little more about artists that we don’t necessarily see on a regular basis. This particular work really caught my imagination with its dark, atmospheric sky, typical of the artist’s work. ~ Jennie Fisher, Head of Pictures 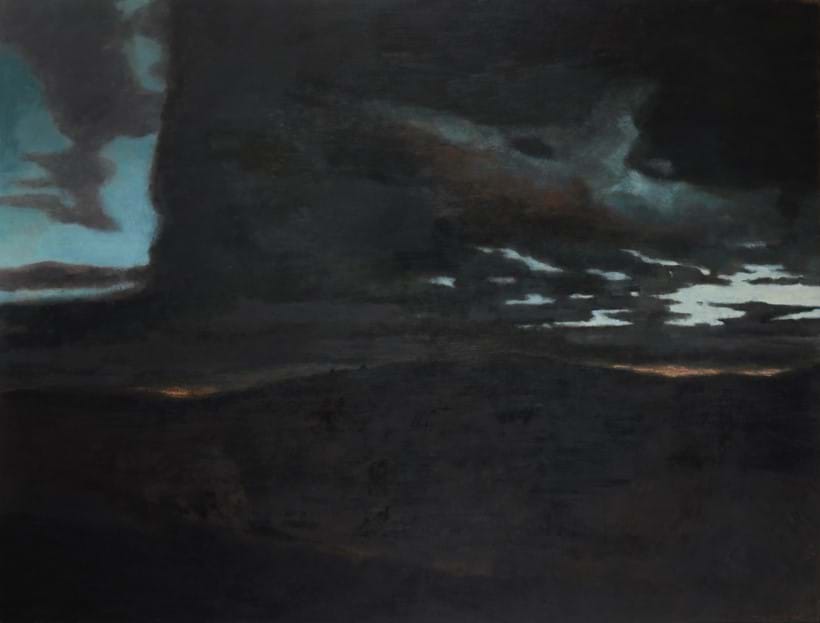 Todd Webb | Panorama: Avenue of the Americas between 43rd and 44th Streets, 1948

This photograph of a New York street evokes a nostalgia with its period cars and shop signs from a time gone by. I also love this photograph because of the panoramic shape which gives a sense of movement and progress – one can imagine the cars carrying on their journey into the next frame. ~ Jennie Fisher, Head of Pictures

I am absolutely mesmerised by this work by Edgard Maxence and I think this is my all-time favourite work that I have handled during my time working at Dreweatts. The lightness of the pigment suggests almost that the work has been left unfinished; however despite this the Madonna transfixes the viewer with her serene yet intense stare. Maxence’s work is typically characterised by a more subtle mystical symbolism, influenced by the work of the Pre-Raphaelites working in Britain during the 19th century and as is the case with this example, Maxence often depicted religious scenes with a focus on female subjects.~ Lucy Gregory, Picture Specialist 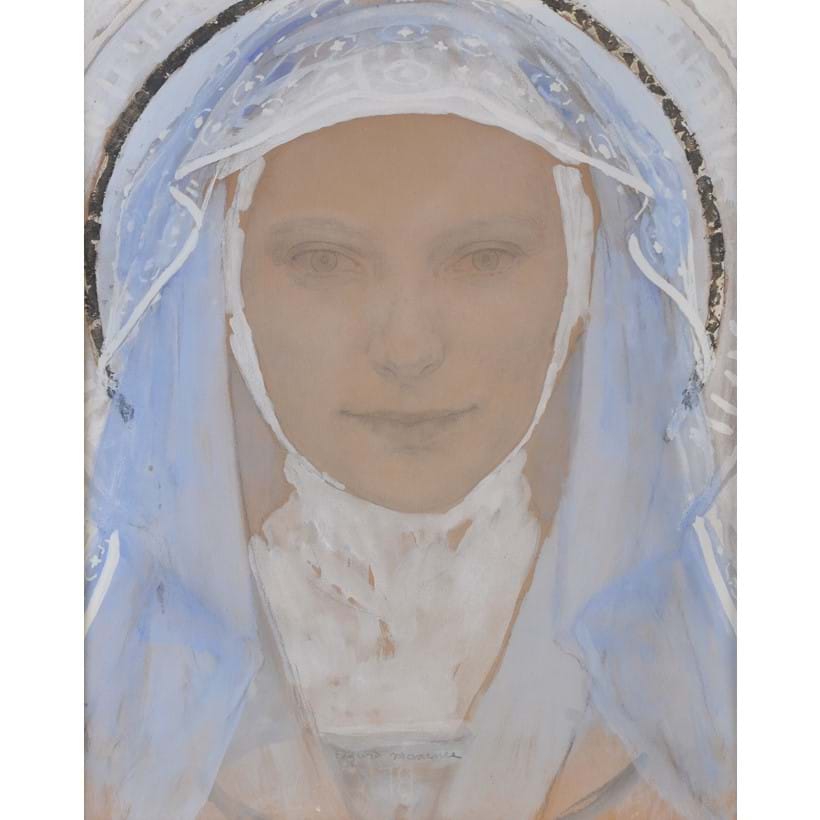 Albert Delerive | Double Portrait of a Lady and Gentleman

I love this work, painted in 1778. The beautiful and elaborate silks worn both by husband and wife; the diamond buckles on the man’s shoes and the lady’s fabulous powdered wig all offer a wonderful insight into 18th century high society fashion. The clavichord is an interesting addition and extra point of interest for those passionate about the history of music.

Delerive studied at the Ecole de dessin at Lille winning awards and building his reputation, and he later became a member of the Acadmie des Arts in Lille, in the Salon of which city he exhibited a large number of drawings and paintings between 1773 and 1788. ~ Lucy Gregory, Picture Specialist Growing up in the small village of Baslow in the Peak District, Chatsworth House and its history is something I have always been aware of. The edge of Baslow village backs onto the estate grounds which we would visit frequently, and the previous Duke and Duchess were both active members of the local community. I therefore always feel a touch of nostalgia when I see paintings that have some connection to the house.

William Cavendish (1640-1707) served as a Whig MP for Derbyshire three times during his life, first in 1661, then later in 1679 and 1681. He was elevated to the House of Lords upon his father’s death in 1684, whereby he also inherited his father’s peerage as Earl of Devonshire.

During the Glorious Revolution, Cavendish was one of the ‘Immortal Seven’ who invited William of Orange to depose James II. He was afterwards rewarded with the elevation of Duke of Devonshire in 1694.

Cavendish was also responsible for remodelling Chatsworth House, designed by William Talman, and now considered to be the first baroque private house in Britain. It was also at this time that he commissioned the fantastic carvings by Grinling Gibbons which can still be seen and enjoyed by all visitors to the house today. ~ Lucy Gregory, Picture Specialist

Attributed to Charles Collins | Study of birds, flowers and insects

This detail in this oil on panel was absolutely exquisite. Every time you looked at the work there was something different that caught your eye. Thought to be dated to the late 17th/early 18th century this was a fascinating piece that caught the imagination of numerous buyers that encouraged competitive bidding on the day. ~ Francesca Whitham, Junior Picture Specialist 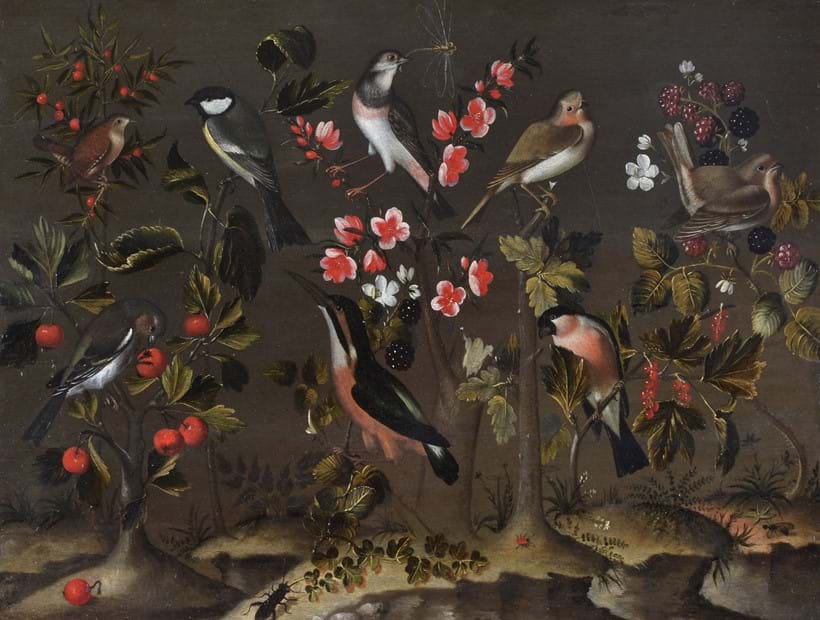 I have always loved the work of Dylan Lewis but even more so after my recent visit to South Africa where I was lucky enough to immerse myself in Dylan Lewis’ sculpture park. The park has been curated by the artist, who has chosen the placement of every sculpture. The park is set against a dramatic mountainous backdrop which perfectly complements his large scale sculptures. As I explored the park, choosing different paths at each corner I stumbled across small maquettes nestled into the nature. It was absolutely fascinating. I feel very priveledged to have sold sculpture by the artist in particular this Leopard lying on a rock, which was a real highlight for me. ~ Francesca Whitham, Junior Picture Specialist 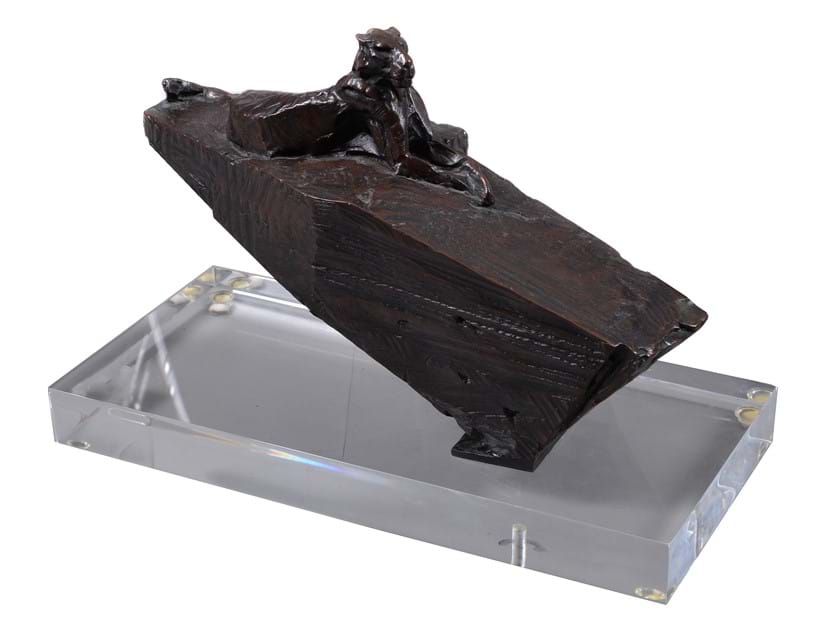 Found in the back of a box with brown tape plastered across the glass and a small post-it note which read ‘print’ I received this work to be catalogued for our online platform. However, what lay under all that tape was a beautiful watercolour by artist Fortunino Matania who exhibited at the Royal Academy and Royal Institute. After the First World War, in which Matania focused his efforts as a War artist he switched to depicting idyllic scenes of ancient life for the British women’s magazine Britannia and Eve. His studio was filled with models, statues and Roman replica furniture to help transport his viewers into his Ancient fantasy. I particularly loved the way in which the artist depicted the marble effect in the baths. ~ Francesca Whitham, Junior Picture Specialist 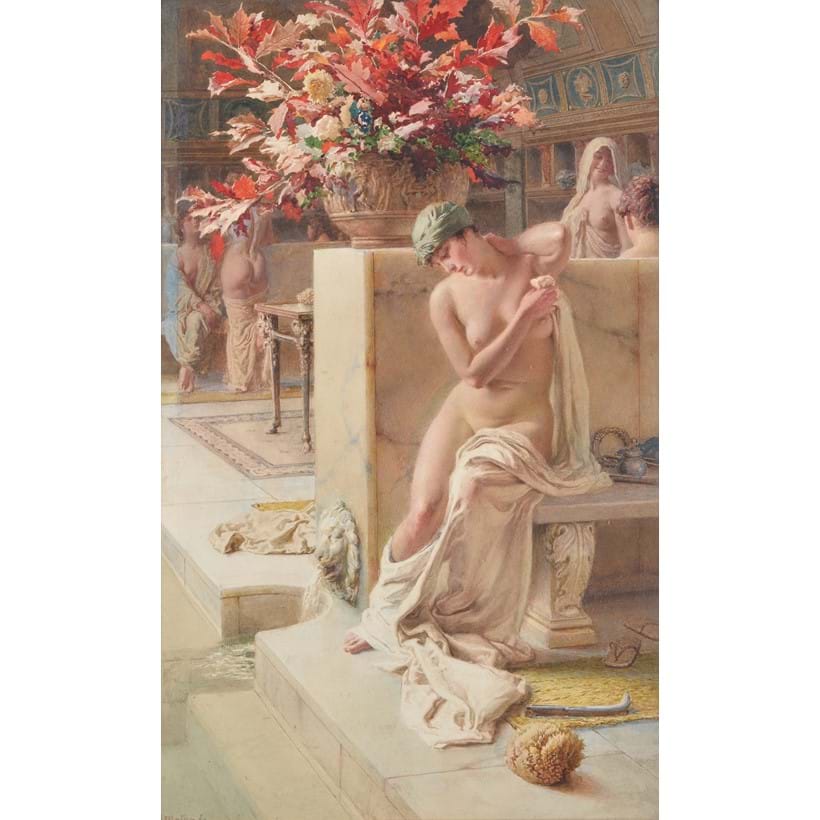