Hollycombe House was the home of the late Tim Hoare and his wife Virginia. The collection at Hollycombe has at its heart a number of wonderful paintings, featuring a mixture of Modern and Contemporary works, as well as more traditional British and European Art. Highlights include works by Salvador Dali, Augustus John, Maurice de Vlaminck, Stanley Spencer, William Anderson and Thomas Gainsborough. 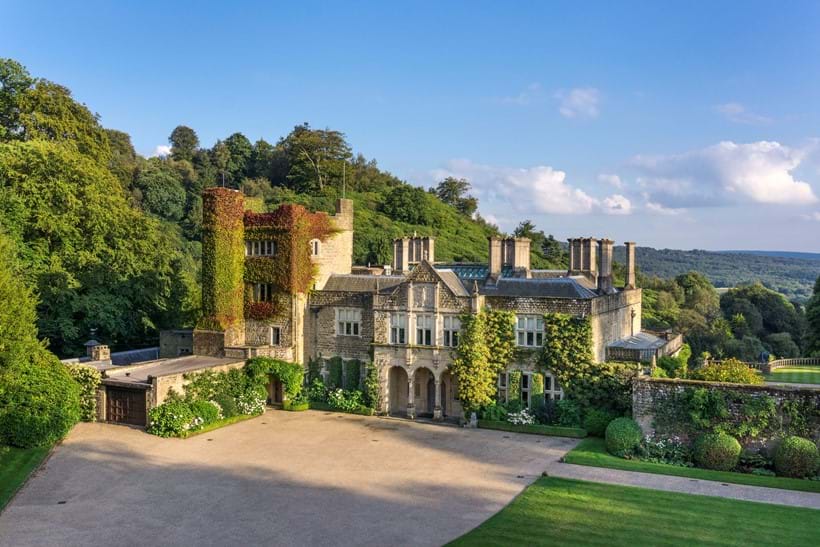 Executed in 1968, here we have Lot 37, Toréador (portrait of the bullfighter hero - Carmen II), by Spanish artist Salvador Dali (1904-1989). From Goya to Picasso and Dali, the spectacle and tradition of bull fighting has permeated the work of successive generations of Spanish artists. 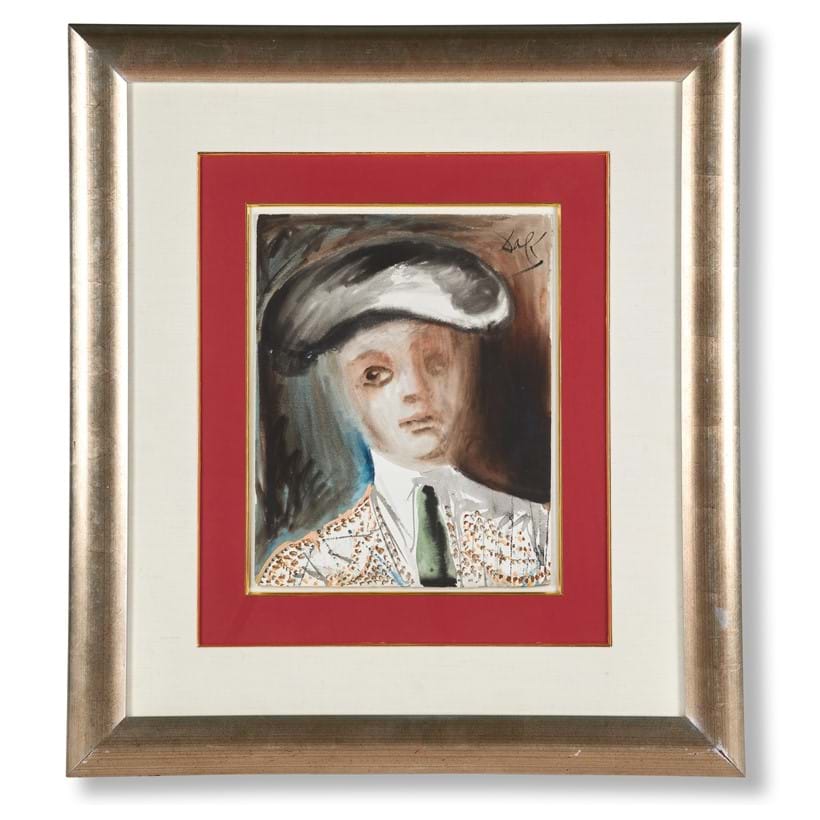 The image of the Toreador has come to epitomise the very essence of a hero - honourable, dignified, formidable yet graceful. The choreographed dance between bull and bullfighter is an intimate series of carefully rehearsed and practiced movements designed ultimately to show off the skill and expertise of the bull fighter.

Dali based his own depictions of the La Tauromquia, on Picasso's earlier famous series of etchings. Dating from 1966, Dali's images incorporate the use of scythes and crosses as a clear indication that the shadow of death hangs over this theatrical spectacle.

The present work is typical of Vlaminck's later palette which is characterised by strong, dark colours punctuated by thickly applied splashes of white. The composition is also one that the artist frequently painted, with the wide street bordered by houses or farms which guides the viewer's eye though the scene. 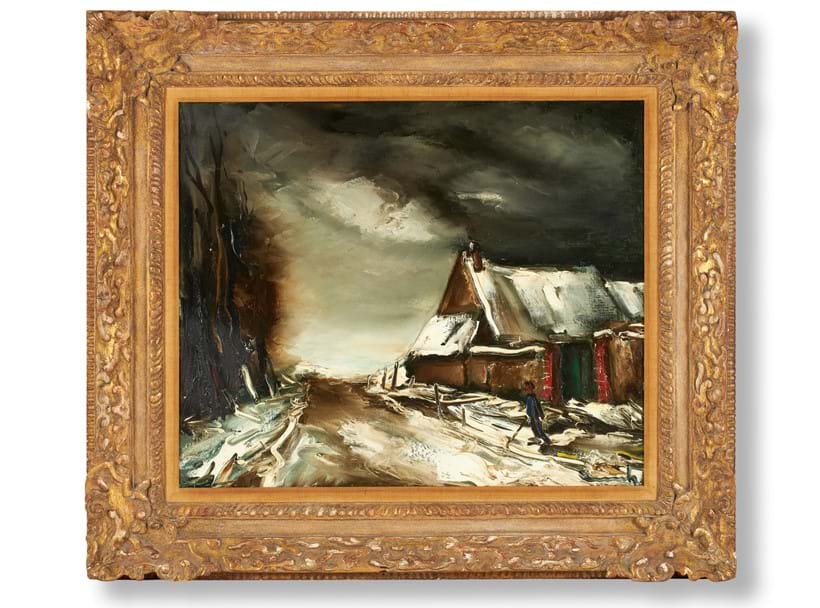 These later works contrast considerably from Vlaminck's earlier Fauvist palette of bright intense colours that had initially brought him to attention at the beginning of the 20th century. Alongside his lifelong friend, André Derain as well as Henri Matisse, Albert Marquet, Jean Puy and Charles Camoin, Vlaminck participated in the famous Salon d'Automne of 1905. When critic Louis Vauxcelles saw their vividly painted compositions, he described them as 'Fauves' (wild beasts), thus coining the term by which they would later become known. 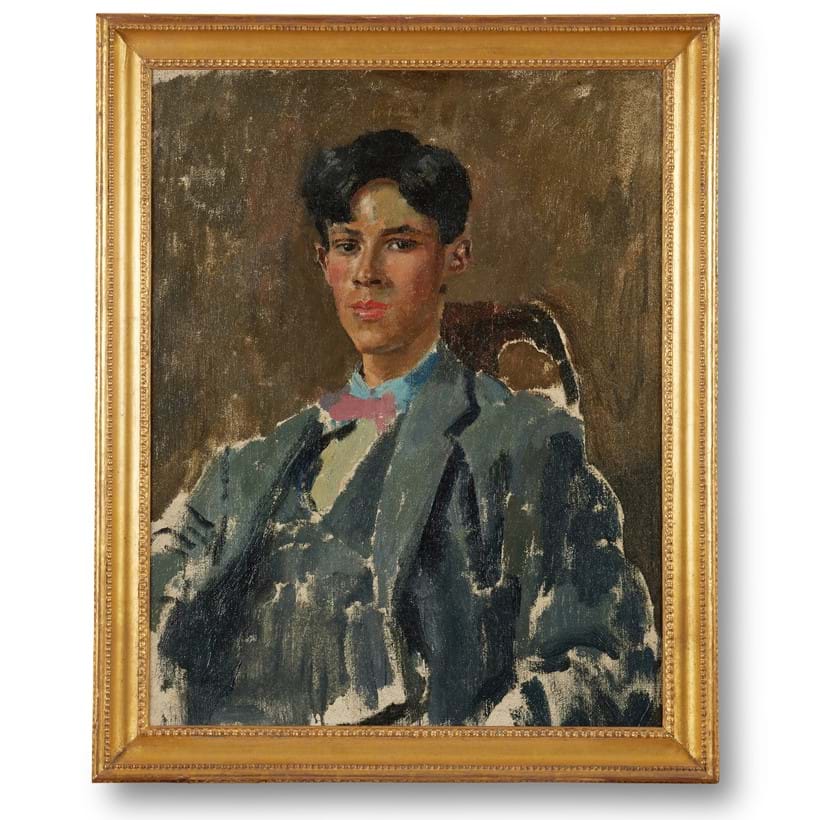 David was born in January 1902, the first child of Augustus and his first wife, Ida Nettleship. David's upbringing was complex and somewhat chaotic - he was brought up alongside his siblings as well as the children of Augustus and Dorelia, who had become the artist's lover and model in 1903. With the death of his mother from puerperal fever in Paris in 1907, matters were further complicated although his father clearly felt great affection for his son. Later in life, David became an oboist in the Sadler's Wells orchestra and also worked as a postman and furniture restorer.

Whilst some of Augustus John's commissioned portraits can be quite formulaic, his more intimate depictions of family, friends and mistresses exude a freshness and spontaneity that reflects the affection felt by the artist towards his sitter. The present work is a prime example of that combination of energy and empathy. With its fluid post-impressionistic brush-strokes, the portrait of David demonstrates the confidence of the artist in working directly onto the canvas. 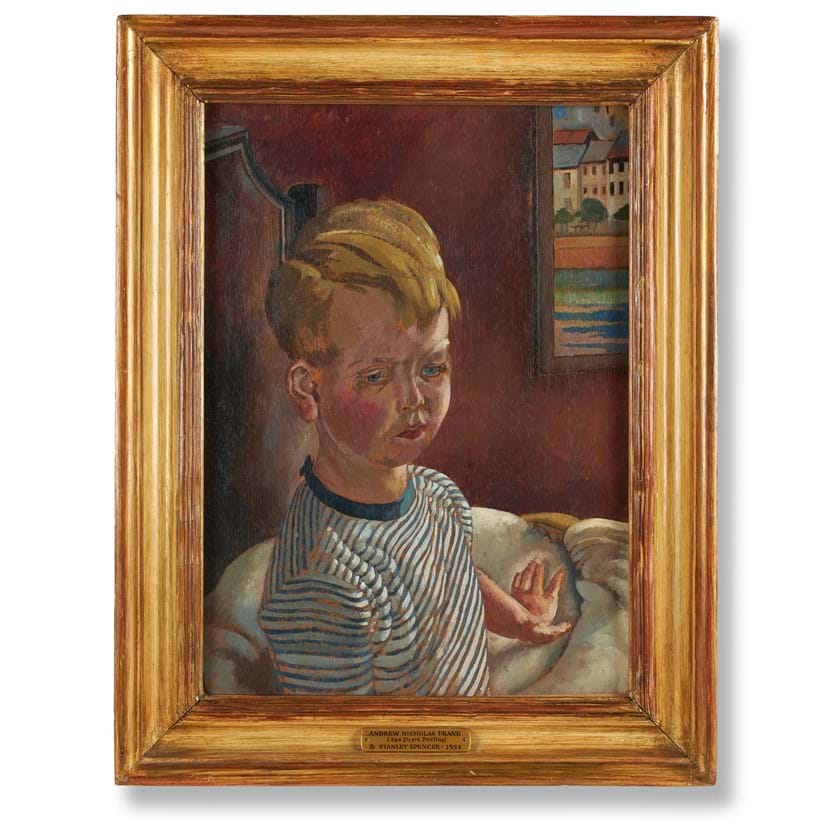 The sitter was the son of Dr and Mrs Osmund Frank and Spencer had painted his father in 1950 (Bell no. 351), who was mayor of Maidenhead from 1946 to 1950. Spencer also painted Mrs Frank (1951, Bell no. 368) and Dr Frank's dog (1955, Bell no. 410). Keith Bell notes that Andrew was two and a half years old when he sat for the present work. The work started as a pencil drawing on plywood but as the boy sat so still Spencer decided to paint the work in oil.

It was acquired by Tim and Virginia Hoare from Christie's sale in London on 9 June 2006.

Looking at the more traditional works in the collection now, here we have Lot 299. This oil on canvas is by Scottish artist William Anderson (1757-1837). It depicts the capture of Fort Royal, Martinique on 22 March 1794 by Captain Faulknor of the Zebra and other forces under Admiral Sir John Jervis. It has previously been exhibited at The Royal Academy in 1795, and later then at The Parker Gallery in London. 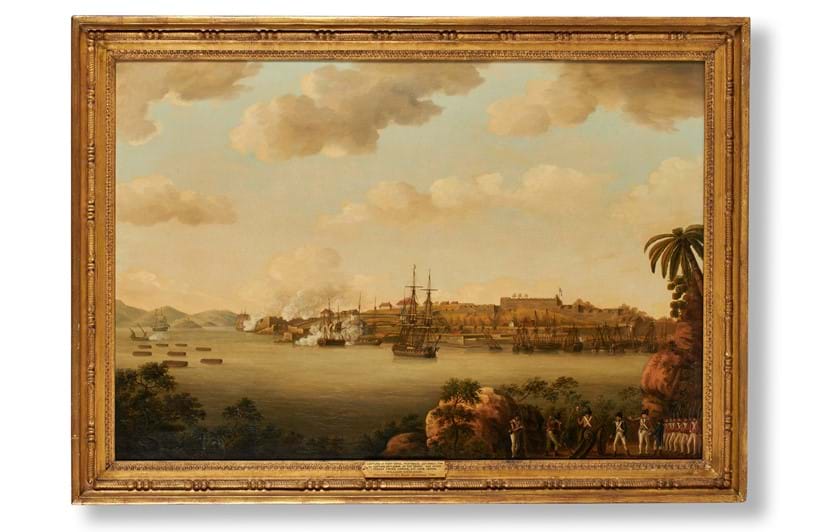 Originally discovered by the Spanish and named by them Martinico, the West Indian island of Martinique was first colonised by France in 1635. Captured by the British towards the end of the Seven Years' War (1756-63) in February 1762, it was restored to France by the Treaty of Paris only to be retaken again twice during the French Revolutionary and Napoleonic Wars, first in March 1794 [restored 1802] and a second time in February 1809. Finally returned to French rule in 1815, it was one of France's principal sources of raw sugar throughout the eighteenth century and beyond, and supported a hugely profitable enterprise and its society in the colony. Thus, when Revolutionary France declared War on England early in 1793, Martinique proved an irresistible temptation for British arms and, when Admiral Sir John Jervis (later Lord St. Vincent) was appointed Commander-in-Chief, West Indies, that autumn, he was tasked with formulating plans for a spring offensive the following year.

Flying his flag in the 98-gun practically new 2nd rate H.M.S. Boyne, Jervis arrived in Barbados to take up his new command towards the end of January 1794, and had an expeditionary force of twenty ships-of-war, with 6,100 troops aboard, ready to sail on 2nd February. Arriving off Martinique on the 5th, Jervis found the island poorly defended, with only two warships mounting fifty guns between them to protect it. The troops were disembarked at three points and, by 16th March, the island was under British control except for the heavily armed fortifications at Fort Royal and Fort Bourbon. In fact, the entire operation was a model of co-operation between soldiers and sailors, with the culmination of their joint efforts just days away.

The main assault on Fort Royal - and its principal citadel Fort Louis - took place on 20th March during which Captain Robert Faulknor and the men of Zebra played a crucial role. Faulknor ran the Zebra so close under the walls of Fort Louis that he was able to jump ashore with his crew and storm the fortress which instantly capitulated. Smaller boats loaded with troops landed elsewhere and attacked Fort Royal, taking it after a furious fight. Two days later, on the 22nd, General Rochambeau, the island's governor, surrendered himself and his forces at Fort Bourbon and Martinique passed entirely into British hands.

It seems highly probable that this work was commissioned by Captain Faulknor to commemorate his exploits with Zebra on 20th March 1794, and the artist's inscription on the reverse giving the date of 22nd March is therefore slightly erroneous.

Finally, we want to highlight Lot 210, this intriguing oil on canvas by British artist Thomas Gainsborough, Countess in a gold dress. 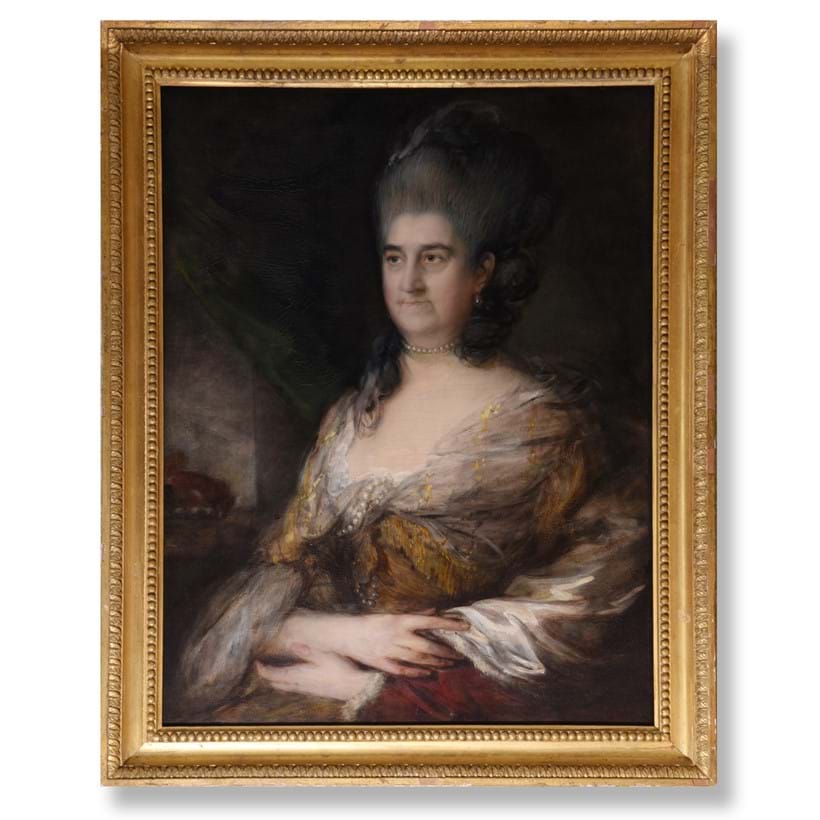 The identification of the sitter is unknown, however the inclusion of the coronet of a viscountess to the left of the sitter has encouraged great debate as to who the sitter may be. According to Hugh Belsey's 2019 publication the portrait dates to the late 1770s and it has been suggested that the sitter must have been in their fifties. When the portrait was exhibited in Brighton in 1884 the sitter was identified as Viscountess Hampden. However, the Viscountess was in her thirties at the time the portrait was painted so this suggestion has to be discredited. The sitter has also been identified as Elizabeth Pierrepont, the Countess of Bristol, Duchess of Kingston (née Chudleigh). However, a known portrait of Elizabeth by Francis Cotes dating to 1763, whilst it draws some similarities it does not depict the same sitter. Another sitter that has been proposed is Theodosia Bligh, Viscountess Crosbie (c.1723-1777). Nonetheless, there are no recorded portraits of Viscountess Crosbie (Lady Glandore) to make comparison to. It is believed that after the portrait was sold in the Louis Huth sale at Christie's in 1905 the area around the sitter's mouth was repainted to improve her appearance. However, these overpaints were removed in 1962 when the portrait was cleaned.

AUCTION:
The auction will take place at Dreweatts (not Hollycombe House):

Viewing is strictly by appointment only and in accordance with government Covid-19 regulations. Please do not turn up without having pre-booked an appointment. Entrance with catalogue only (to purchase a catalogue see below).  Please note there is no viewing on the day of the auctions. If you are wanting to view on Saturday or Sunday, please ensure you have booked your appointment by 12 noon on Friday 11 June, and that you have received an email confirmation of your appointment from us. To book an appointment to view, please email: housesales@dreweatts.com or call 44 (0) 1635 553 553.

DREWEATTS 360 VIRTUAL AUCTION TOUR:
The Dreweatts 360 Virtual Auction Tour will be available from Friday 28 May. The service provides a virtual tour of the rooms at Hollycombe House, allowing you to walk through each room, browsing and interacting with the lots as you go, just as if you were there in person, all from the comfort of your own home, at your own pace and at a time that suits you!