For a humanist scholar

From the group of Western Manuscripts and Miniatures, the manuscript on paper here was written for a humanist scholar with an interest in Greek, in Italy, c. 1500. The last decades of the fifteenth century and the early decades of the sixteenth century saw an explosion in the interest in Greek in Italy, which was driven by the Fall of Constantinople in 1453 and the arrival of fleeing Greek scholars and theologians. Over the years substantial collections of Greek texts were built up by the Vatican and the Marciana in Venice and an affectation for Greek culture and identity entered fashionable learned Italian society.

It can be argued that no other Greek writer had the same impact on Western Culture as Aristotle (384-322 BC)? His works shaped the thought and science of the Ancient World and Late Antiquity, and although lost to the West in the Dark Ages, he made a re-emergence in the twelfth and thirteenth centuries that profoundly shaped all subsequent scholarly writing. The Poetics, composed c. 335 BC, is the earliest extant work on dramatic theory as well as the first Western philosophical work on literary theory.

This manuscript illustrates much about the processes of early paper book production, it is a single sheet of paper folded to form an octavo, with the first three leaves partly cut and only two leaves with writing comprising the first chapter and part of the second. The manuscript seems to have endured, folded for use, but mostly uncut and unbound for perhaps half a millennia, and it may have been used as a bookmark within a larger codex. 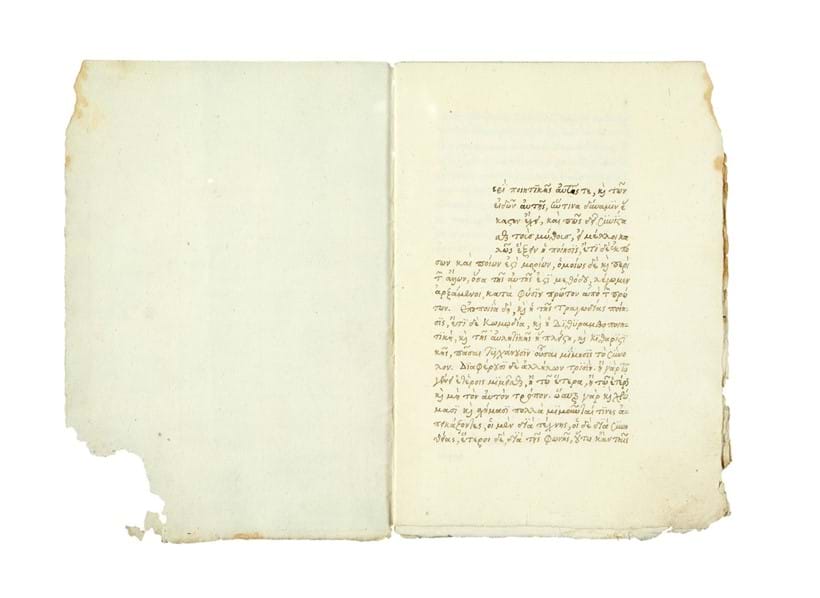 This manuscript is a handsome Renaissance copy of one of the most widely read classics of the Ancient World, probably from the town in which the text was performed again for the first time since Antiquity.

The colophon at the end of the text states the date of the manuscript’s completion, 4 April 1446, and the style of the tri-colour illuminated initials, right, strongly suggest that this was done in Florence or its vicinity. Terence, (more properly Publius Terentius Afer, c. 195/185-c. 159 BC) is one the most well known Roman playwrights. Of Berber origin from Carthage he was brought to Rome by the senator Terentius Lucanus as a slave then educated and freed. He disappeared during a visit to Greece, aged twenty-five, and it is presumed he died on the trip.

Despite this short life his literary impact has been enormous. His works were first performed in Rome in 170-160 BC and they have remained popular over the centuries through to the present day. All six of his works survive, and they were written between 166 and 160 BC. His texts were used throughout the Middle Ages to learn to copy manuscripts and young students are recorded as performing the plays in order to improve their spoken Latin. The first formal performance of one of his works after Antiquity took place in Florence in 1476. The manuscript might have been in attendance at the performance given its date and perhaps it was used to follow the play line-by-line. Although 650 manuscripts of his works survive, they are far from common to the market. 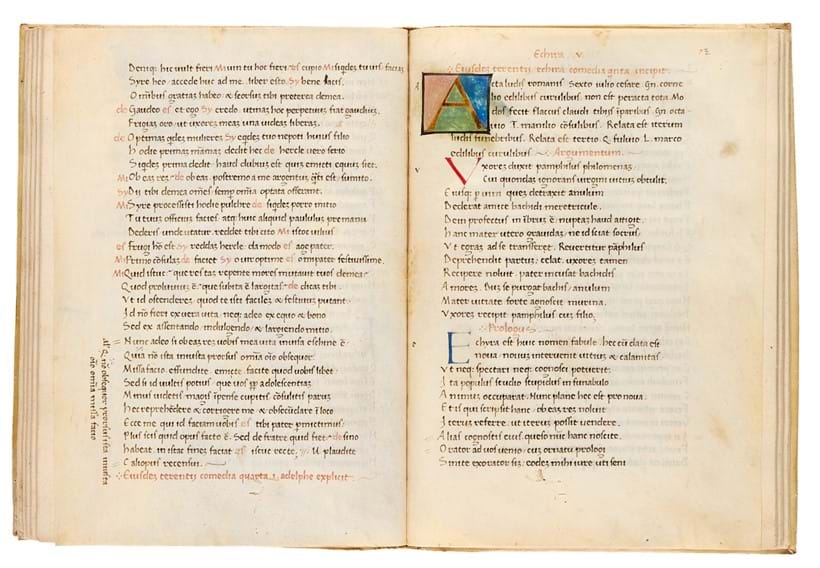 This ‘Liber Extraodinarius’, a Festal Lectionary with Invitatories and Antiphons, in Latin, an illuminated manuscript on parchment is dated 1546.

An elaborate calligraphic colophon to this volume records that it was written and illuminated for the church of St. Barnabus, that its production began in 1544, was completed in March 1546 and paid for by a bequest for repairs and replacement of books left by Revd. Dr Dominicus de Gropis. It consists of 84 leaves and contains Lections for the feasts of Easter week, as well as those for Corpus Christi, St. Barnabus, St. John the Baptist, SS. Peter and Paul, the Visitation and Christmas; and invitatories for some of these feasts, for a saint’s day and for All Souls. ‘Liber Extraordinarius’ was previously in the possession of Bertram Ashburnham (1797-1878), who by virtue of his vast library can be known as a bibliophile giant among the grand collectors of the nineteenth century. 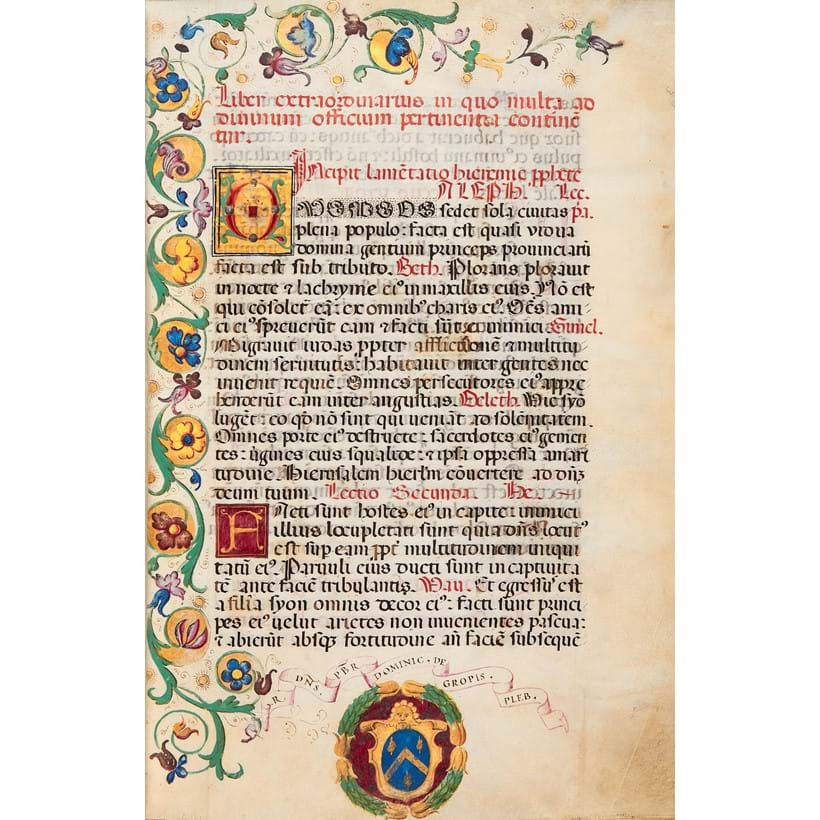 Exceptionally rare on the open market

From the group of Oriental Manuscripts and Miniatures, this is an important Arabic translation of the first and only work in the Islamic world dedicated to mechanical automated clocks first compiled in 1559 AD by the Ottoman astronomer Taqi al-Din ibn Ma’ruf (d. 1585 AD). Taqi al-Din invented the turn-split, used in steam engines, popularised decimal fractions, used mechanical clocks for observations and worte the last authoritative text on optics in the Islamic world. The introduction praises Samiz Ali Pasha (Grand Vizier of the Ottoman Empire, 1561-1566) for allowing Taqi al-Din access to his personal private library and collection of European mechanical clocks used to compile the text. A dedication to Suleyman I, reigning Ottoman Sultan at the time of the composition is also included. The inclusion of both of these indicates that the text was translated from an original source.

The text is exceptionally rare and only a tiny handful can be traced in institutional ownership, no copies at all are recorded on the open market. 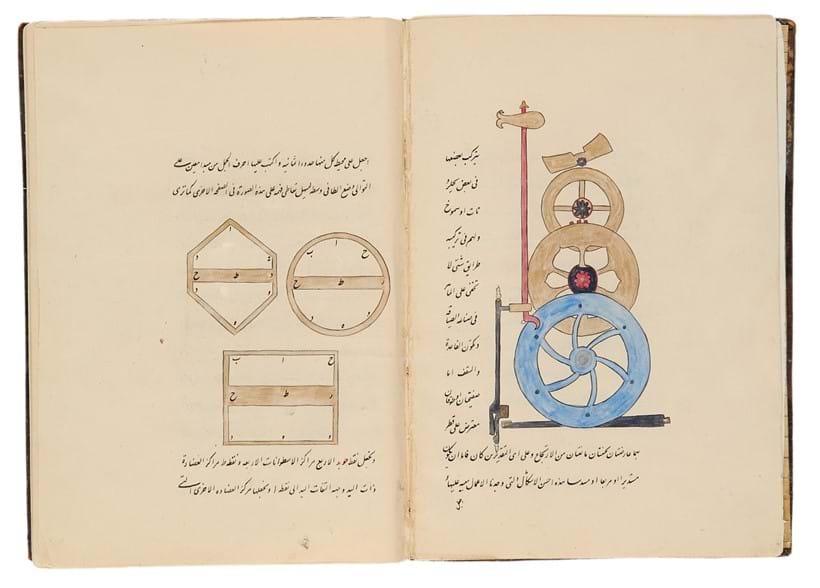 This charming miniature Qur’an here in Arabic, signed and dated in closing colophon by a named scribe, is preserved in excellent condition in its original talismanic silver box which comes with a clasp. It comprises 200 leaves, with between 38 and 41 lines of gold gubari per page and is bound in contemporary brown morocco. 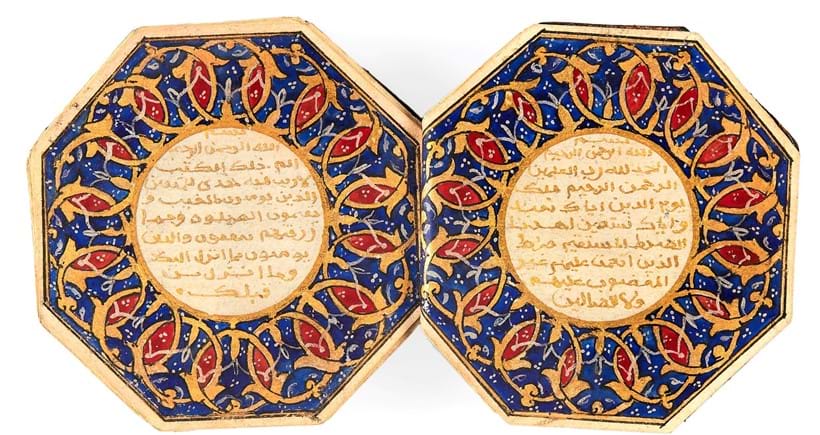 A scene from the Bhagatava Purana

This single folio depicts a scene from the Bhagatava Purana, one of Hinduism’s eighteen great Puranas or great histories. Composed in Sanskrit and available in almost all Indian languages, the Bhagatava Purana promotes devotion to Krishna and discusses a wide range of topics including cosmology, genealogy, geography, mythology, music, dance, yoga and culture. The text is revered in Vaishnavism, the Hindu tradition that venerates Vishnu.

The folio is in Deccani school style, which flourished from the late 16th century, and is dated to the early eighteenth century, possibly from Nagpur, central India. The Deccani style is a sensitive, highly integrated blend of indigenous and foreign art forms. The elongated figures take their inspiration from wall paintings seen in southern India, whilst the floral-sprigged backgrounds and high horizons indicate Persian influence. Deccani colours are rich and luminous with much use made of white and gold. 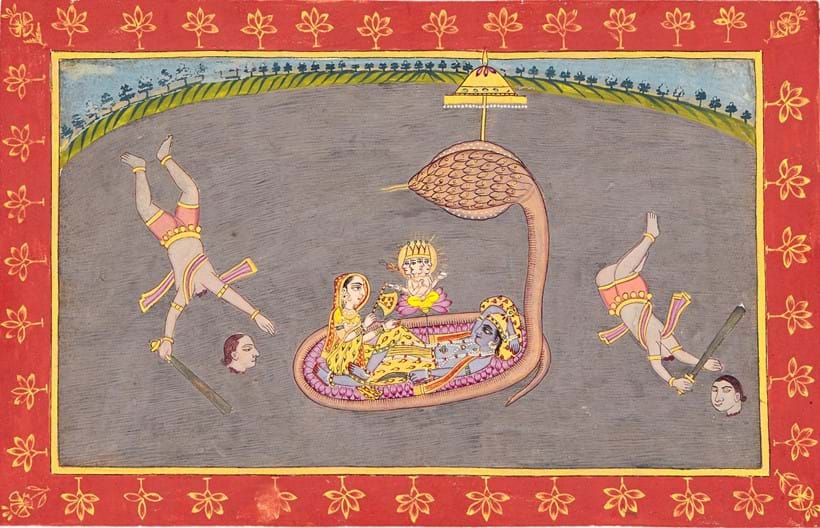 Lot 97, Vishnu reclining on the multi-headed serpent Shesha, with his wife Lakshimi over the cosmic ocean; est. £750-1,000 (+fees)