Coming up on 10 & 11 November, we have our two-day auction of Chinese and Japanese Works of Art, including Islamic and Indian Art. The auctions feature a superb selection of items including paintings, textiles, jade, bronzes, pottery, porcelain and works on paper.

Day One of the auction features a variety of Chinese ceramics and works of art, showcasing the breadth of Chinese history. We start the auction with a bronze gu vessel. This was known as a ritual vessel used to serve wine in the Shang dynasty (1600-1046 BC). This vessel belongs to the latter stage of the Erligang phase, circa 14th to 13th centuries BC and as Robert Bagley discusses in Shang Ritual Bronzes in the Arthur M. Sackler Collections, no.25, pp. 216-219 the thickened waist is only seen occasionally during this period. It comes to auction from a private English Collection by family descent having been purchased from Roger Keverne in October 2009. 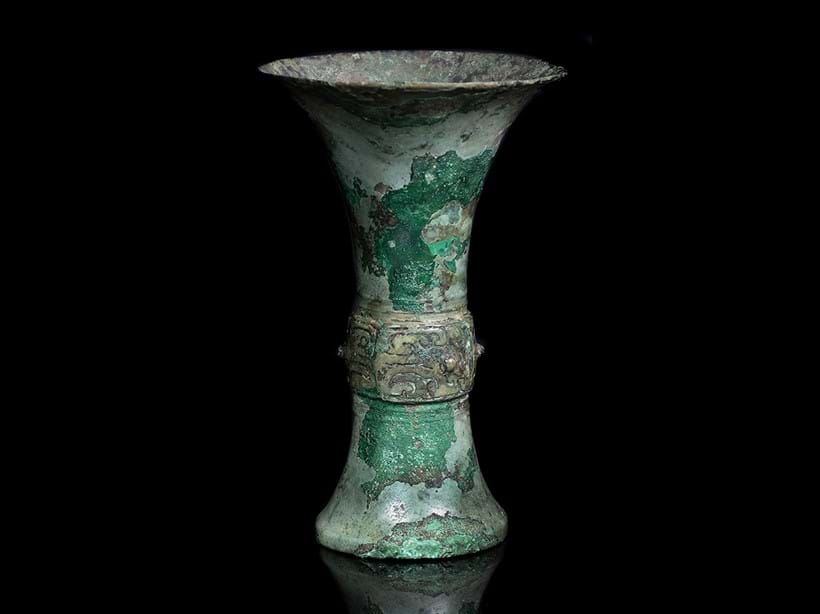 The Shang dynasty is remembered for its splendid bronze casting technique. Bronze vessels were used in divinatory ceremonies for sacrificial offerings of meat, wine, and grain, primarily to the spirits of the clan's ancestors, especially those of the ruler and his family. 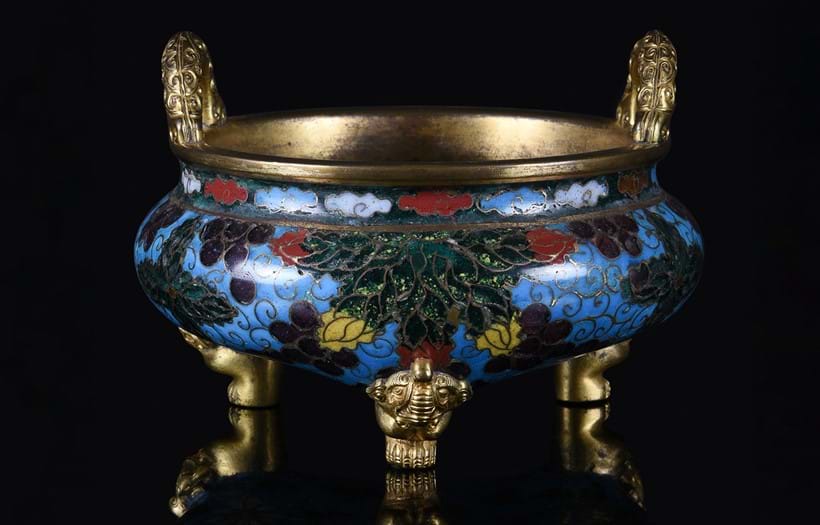 We then have Lot 139, a pair of small Chinese qingbai foliate dishes. These date from the Northern Song Dynasty (960-1127). The Song Dynasty marked a high point in Chinese pottery. Unlike Shang bronzes which often bear designs of mythical taotie beast masks, Song wares are noted for their simplicity of shape and the purity of colour and tone of their glazes. The simplicity of shape and freshness inherent in Song monochromatic wares can evoke a deeply personal aesthetic consciousness, a bittersweet mix of loneliness and serenity as its minimalist shape and subtle hue push the viewer to go beyond its physical form.

These were part of a private Oxfordshire collection and the current collector purchased the pair for HKD 16,000 from K. Y. Fine Art in Hong Kong on 7 June 2003, with their original receipt. 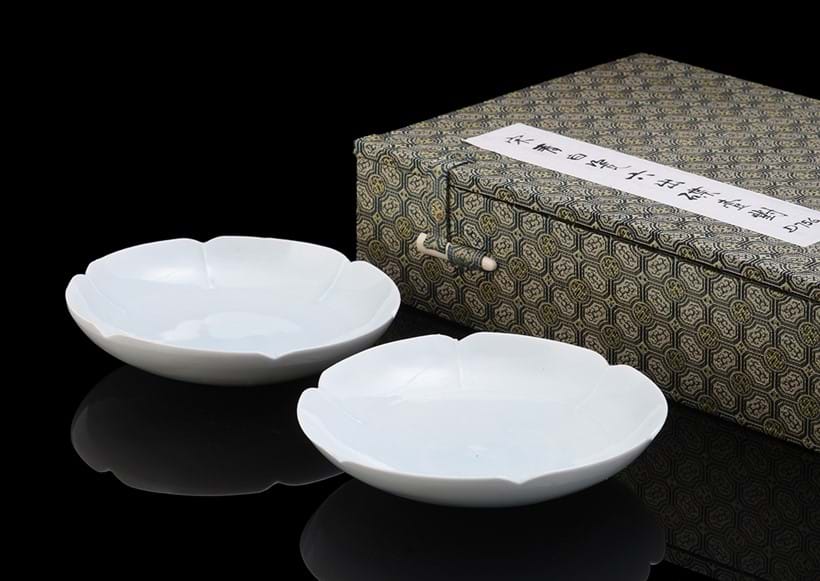 From a private collection and inherited by the current owner, we have Lot 158, a rare Chinese 'peach bloom' brush washer, bearing the six-character mark of Kangxi and is of the period. This type of brush washer is described as being of gong shape, or tangluo xi, as it has a very compressed body. It belongs to a group of vessels referred to as the ba da ma 'Eight Great Numbers'. Also from the same private collection, we have Lot 159, an 18th century Chinese copper-red glazed small 'Monk's Cap' ewer, from the Qing Dynasty. 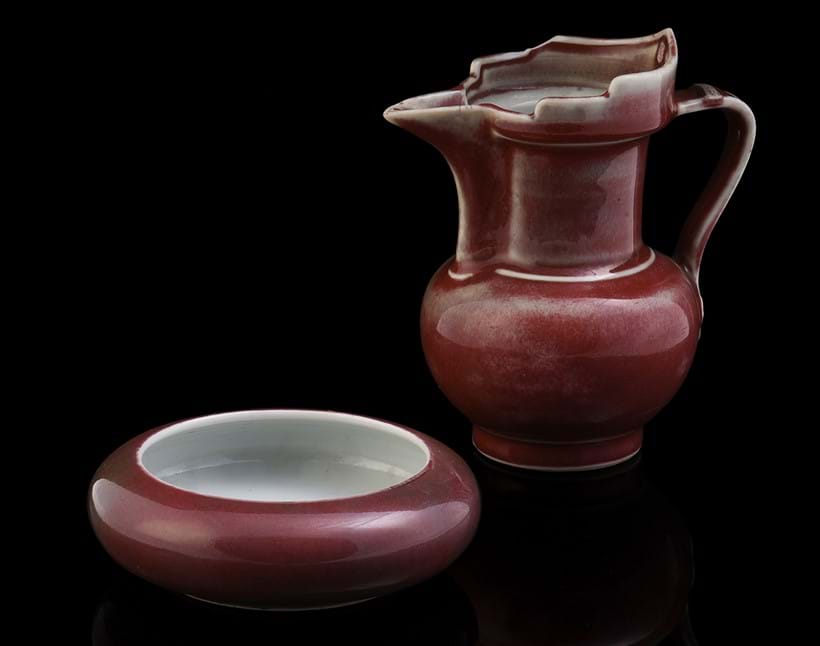 We then have Lot 172, this beautiful Chinese famille rose porcelain plaque by Wei Rongsheng, from the Republic period, dated the year of Genwu (1930). It is painted with the Tang-Dynasty tale 'Liu Yi Chuan Shu'. It depicts a failed examination candidate's encounter with a shepherdess in distress, who turns out to be the youngest daughter of the Dragon King of Lake Dongting. 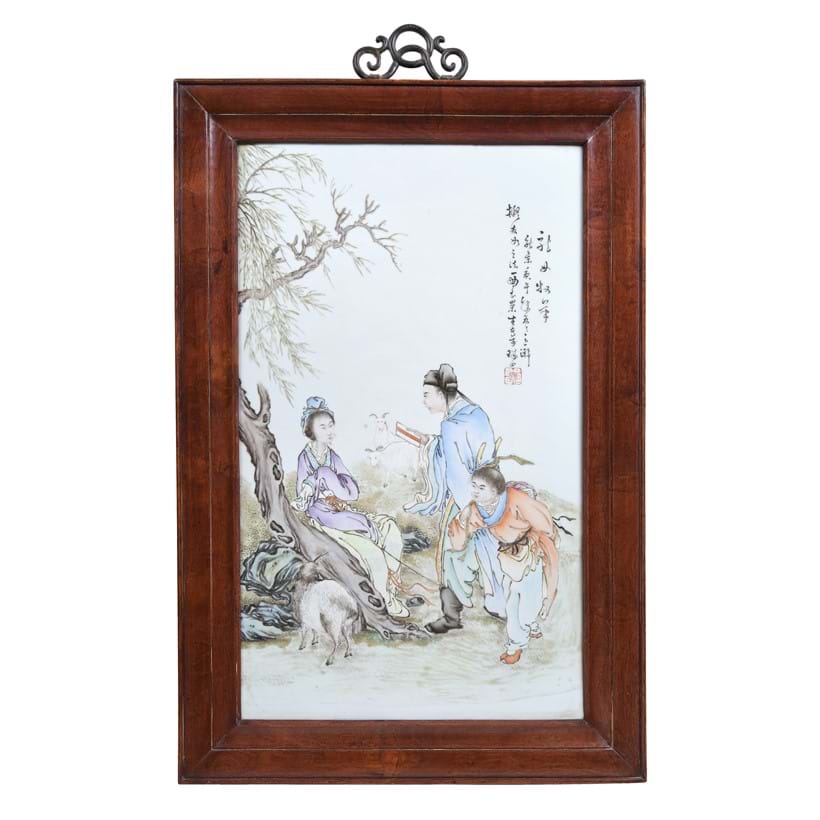 Moving onto Day Two of the auction and we continue with Part Two of the Chinese ceramics and works of art selection. Here we have Lot 307, a good Chinese white jade 'shop' box and cover. Estimated at £6,000-8,000 (+ fees), it is designed in rectangular form, and displays an even white tone with some white mottled inclusions. 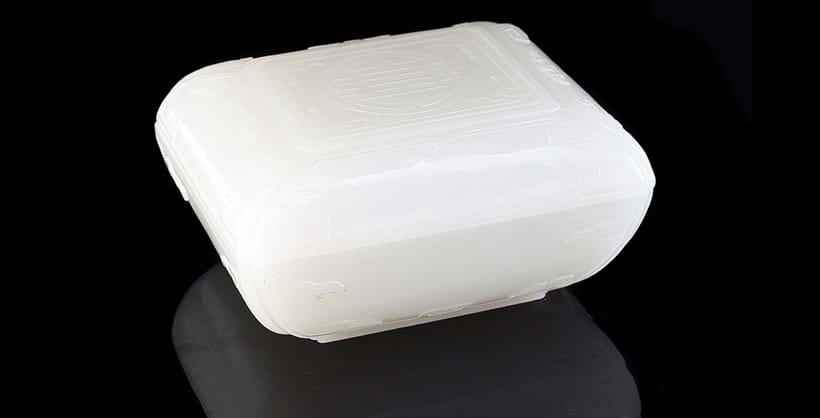 A fine large buff sandstone figure of a Chauri Bearer

From the selection of Indian works of art, a highlight is Lot 467, a fine large buff sandstone figure of a Chauri Bearer. Dating to circa 9th-11th century, it originates from Central India. It was with Michael Macmillan Ltd in London from 1973-1976, where it was then purchased by the current owner in June 1976. It comes with a copy of ht supporting letter from Michael Macmillan Ltd. 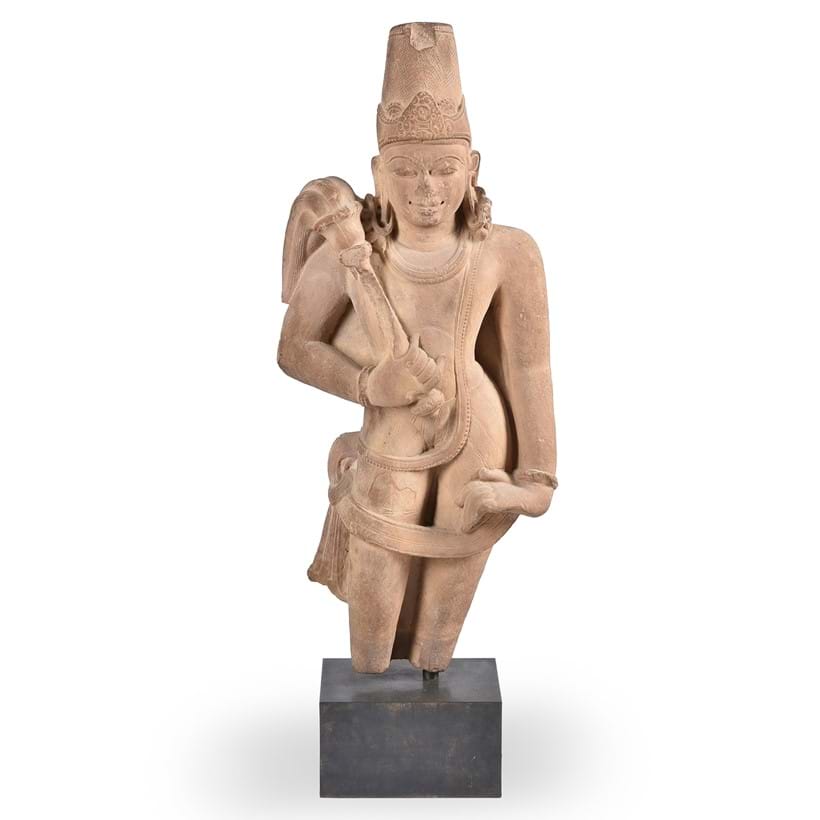 Dating to circa 14th century Thailand, we have this fine Sukhothai bronze head of a Buddha (Lot 468). It comes from a private family collection, and is thought to have been acquired in the 1980s from Michael Pearson in Bond Street on the advice of the late Robert Kleiner.

The distinctive style of the short-lived Sukhothai kingdom is perhaps the most characteristic and admired, as well as the earliest, of the core Thai schools of sculpture, flourishing mostly in the fourteenth century. 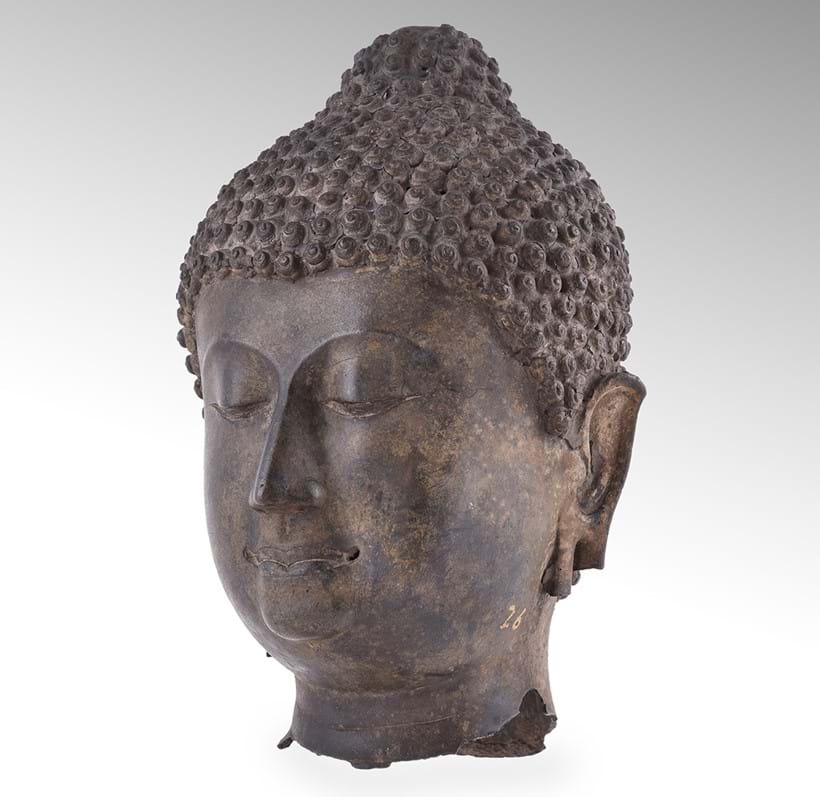 An illustrated copy of the Mahabharata

Continuing through the auction, we have Lot 520, an illustrated copy of the Mahabharata from India, dated 1968-69. This is an Urdu and Persian manuscript on paper, from the collection of the late Jerzy Ostrovsky, who lived in Kabul in the 1960's and 1970's, working as the dentist to the Western diplomatic corps. 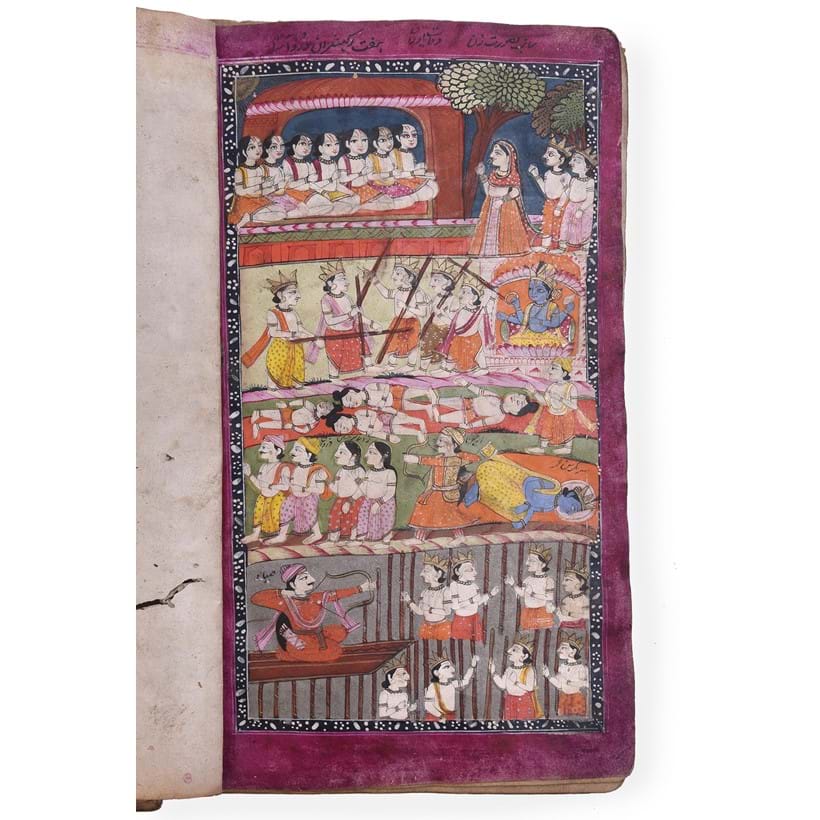 Finally, we have here an unusual satsuma pottery vase by Yabu Meizan. Dating from the Meiji period, it is delicately decorated in overglaze enamels and gilding with a cockatoo perched on the branch of a flowering magnolia tree. 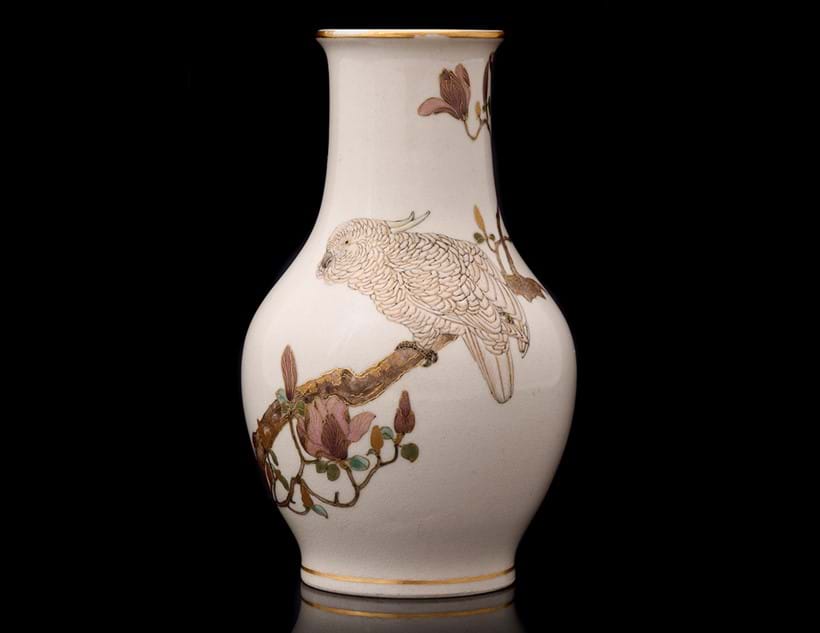