At Dreweatts, we are proud of our continued effort to reach international bidders from across the world, with registrants from up to 45 different countries registering to bid for each of our auctions. Our ever-growing presence on the art market has enabled us to establish strong relationships with many new buyers and new consigners. We have proven year on year how we are able to achieve top prices for foreign artists despite being based in the UK. We list our sales on third-party bidding platforms alongside our own which has continued to grow our client base and help grow specific markets.

Dreweatts’ Timed Online sales are no different. Dreweatts are pleased to present the second edition of the Fine Art Timed Online sale which runs from 8-22 April. Step aboard and purchase your round the world ticket with Dreweatts as we showcase some of the highlights from the sale which illustrate the breadth and diversity of the works on offer. 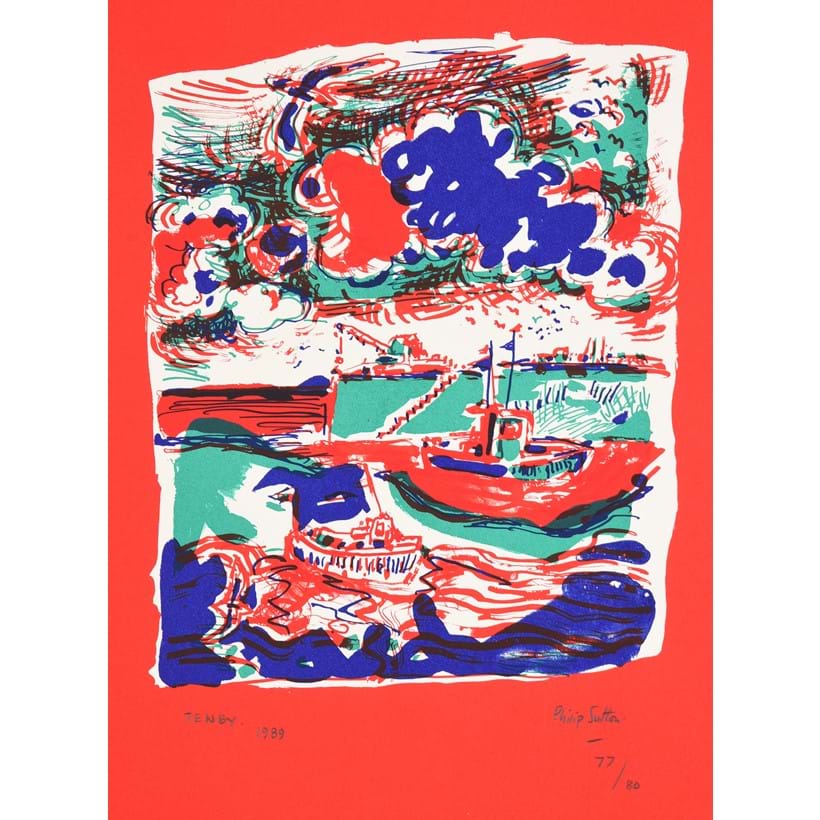 We are starting the journey at the seaside in Wales with Philip Sutton’s vibrant lithograph from 1989. The work captures in red, blue and green the harbour of the seaside town of Tenby as the boats are shown on choppy waters. The town, renowned for its colourful cottages which line the harbour’s edge, reflects the colourful nature of Sutton’s work. 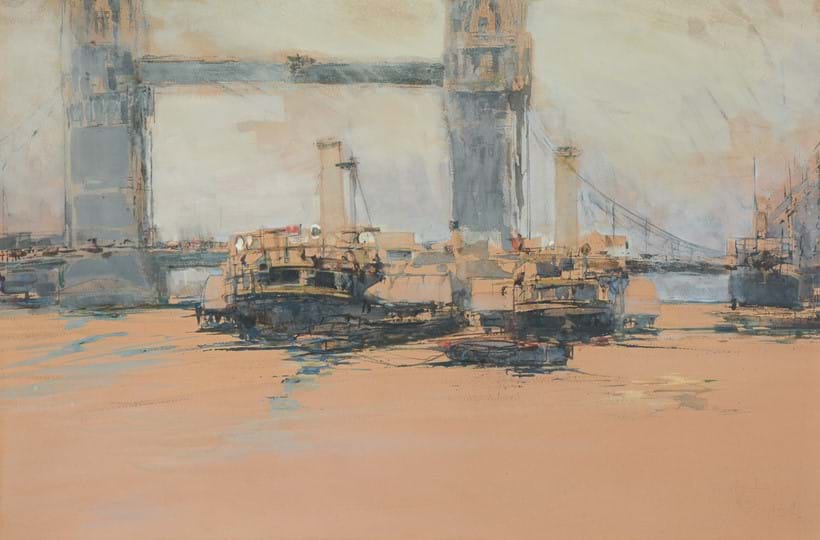 Next we are kick starting the engine and jumping in the car to London. 5 hours later and you will find yourself stood next to the Thames admiring Tower Bridge. The bridge was opened by Edward, Prince of Wales and Alexandra, Princess of Wales in 1894 after eight years of construction. This iconic suspension bridge is depicted in William Walcot’s 1924 watercolour of the River Thames with a row of boats and Tower Bridge beyond.

London to France to Italy 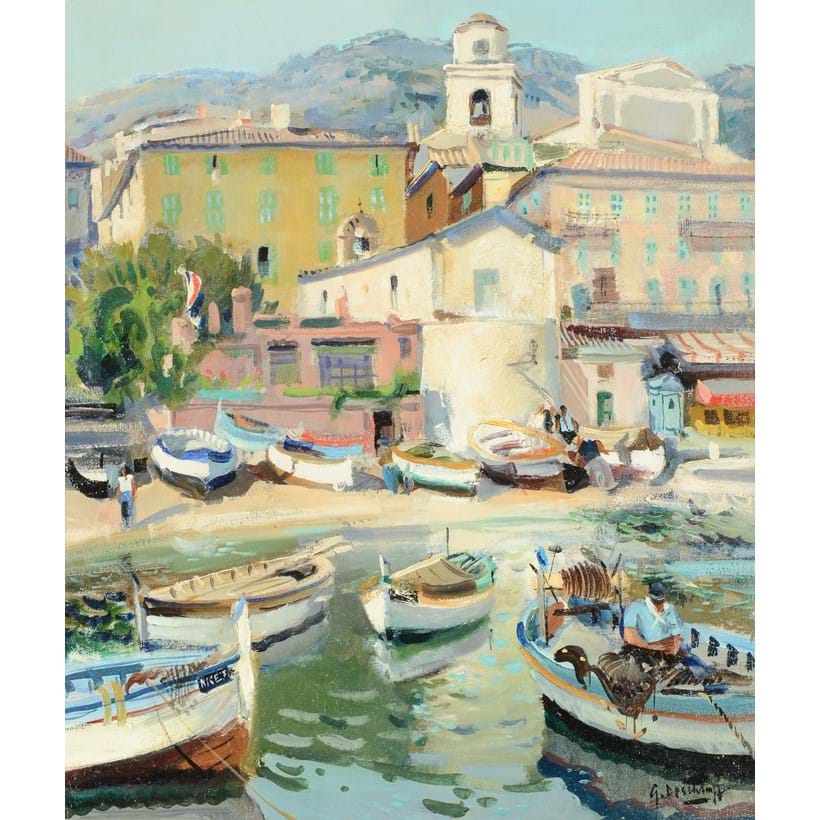 From the chilly waters of the Thames we are jet setting to the warmth of the Mediterranean to the idyllic Côte d'Azur, where Picasso once lived. Situated to the west of Nice and just east of Monte-Carlo, Gabriel Deschamps transports the viewer to Villefranche. Deschamps studied at the Ecole Nationale Superieure des Beaux Arts in Paris. With a house in Provence, Deschamps spent much time painting along the coastline of the South of France producing evocative landscapes of some of France’s most popular destinations. Another three landscapes by Deschamps are also included in the auction. 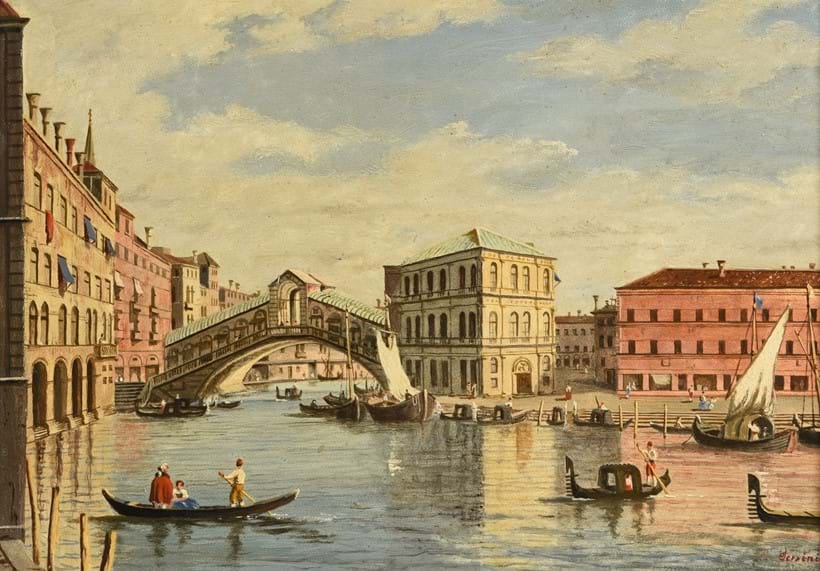 There is just enough time to jump on a direct flight from Nice to Venice to view the iconic Rialto Bridge painted with great attention to detail by Italian artist Alberto Terrini before we travel straight to Rome. The Colosseum, the largest amphitheatre in the world, was built between 72 A.D. and 80 A.D. under the Emperor Vespasian. The subdued colour palette used by Charles Cundall captures the atmosphere of Rome with the Italian hills beyond. Charles Cundall studied at the Slade School of Art before continuing his studies in Paris. Between 1921 and 1923 Cundall travelled extensively through Italy and onto Spain, Russia and Sweden. On Cundall’s return he held his first solo show at Colnaghi Gallery in London. 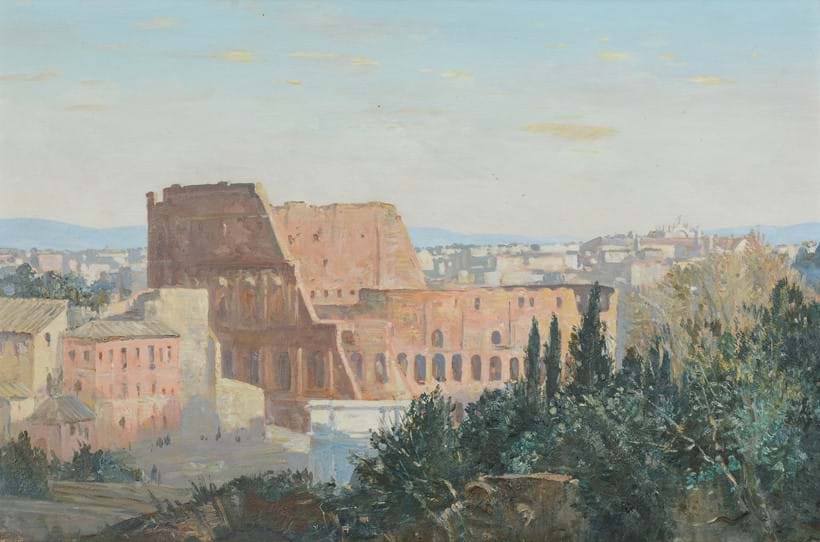 Heading East to Hong Kong, the plane lands at 5pm and we head straight to Kowloon in the Northern part of mainland Hong Kong from here there is a magnificent view of Hong Kong island. Painted by Bill Jacklin in 1994 the piece captures the atmosphere across the water in a hazy purple mist. 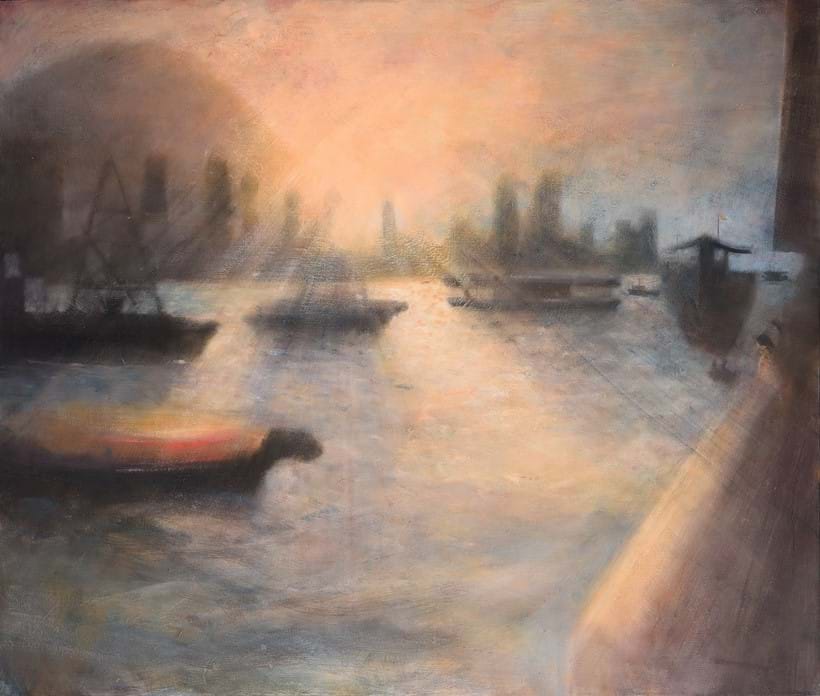 Next it is time to adventure across the Savanna and head out on Safari. Norton was born in Zimbabwe in 1963 and grew up on a farm in the northeast of the country. His career as an artist started professionally in 1988 and since he has exhibited internationally including New York, Austria and London. Norton’s captures wildlife in its natural habitat. Included in the sale are oil paintings of Giraffes on the Savanna, The Elephant, Zebras at the watering hole and Morning Glory Kudu Bull and Glossy Starling. 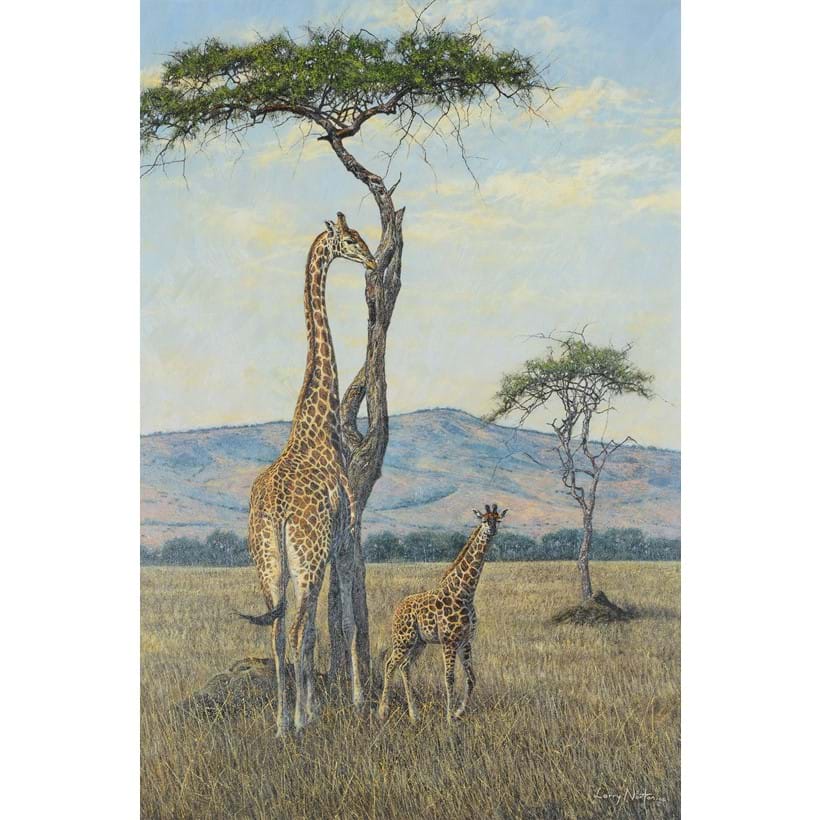 Travelling South we stop in Johannesburg in South Africa. The weather has turned and Maud Frances Eyston Sumner has captured Joubert Park in Johannesburg in the snow. Sumner completed a masters degree at Oxford University and in 1925 she attended the Westminster School of Art. Following this Sumner travelled to Paris where she was heavily influenced by the post-impressionists. At the outbreak of the second world war Sumner returned to South Africa and it was during this period that she captured the present view in 1936. 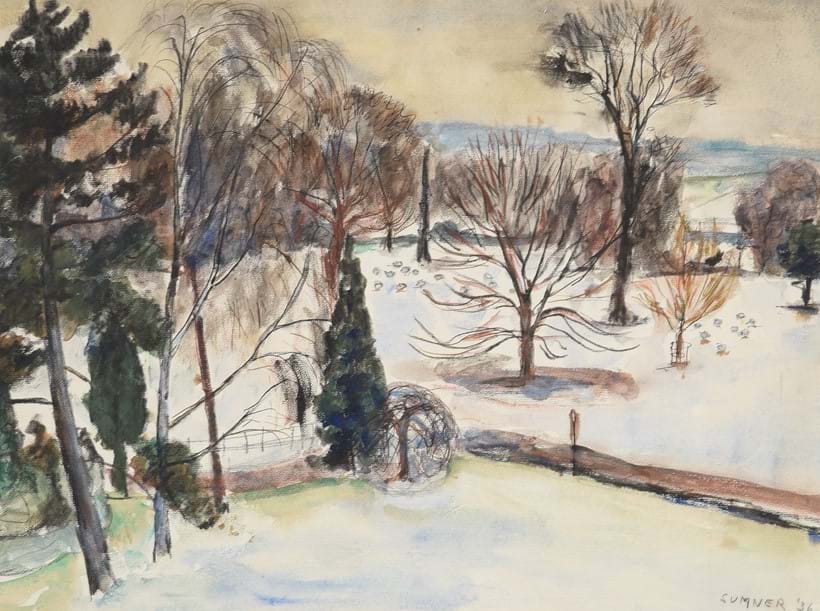 There is one final stop on our worldwide tour through the Fine Art Timed Online sale and we are off to South America. We have arrived in Ecuador and are in the company of Eduardo Kingman Riofrío who was born in Loja in 1913. Kingman studied under Victor Mideros at the Escuela de Bellas Artes in Quito before continuing studies in Venezuela, Peru, Bolivia and California at the San Francisco Art Institute. Coined the painter of hands Kingman’s work expressed the social realities of the indigenous people of Ecuador, through paintings and printmaking. 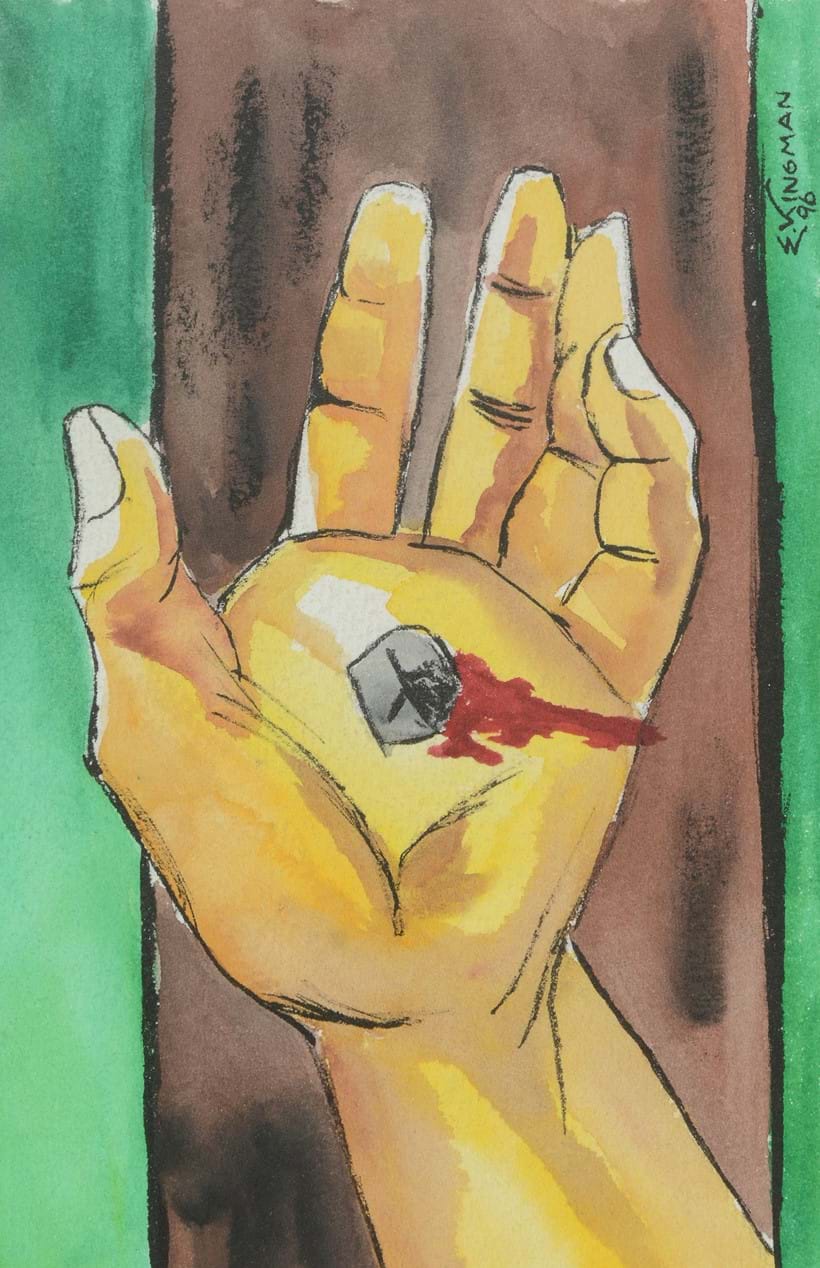 Time to unpack and rest from our travels but don’t forget the sale finishes on 22 April so make time to browse the sale and submit your bids before its too late.

This is a timed online auction running from 8-22 April. Lots will start closing at 30 second intervals from 10.30am BST.