The Selected Contents of Berwick House, Shropshire | Interiors Auction | 12 May 2021

The Selected Contents of Berwick House, Shropshire | Interiors Auction | 12 May 2021

Our Interiors auction on Wednesday 12 May features the selected contents of Berwick House in Shropshire. The collection (Lots 1-144) includes a range of furniture, ceramics, clocks, sculpture and works of art. 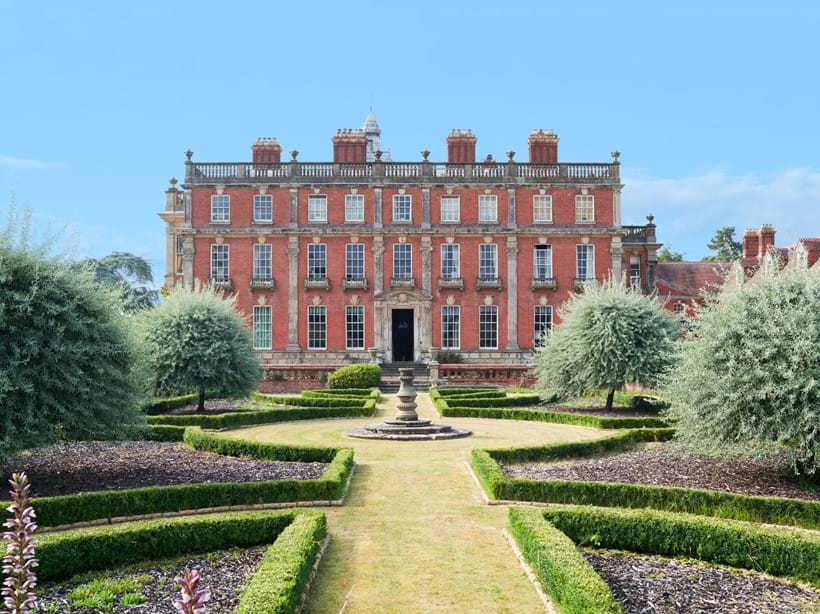 In August 1875, James Watson bought Berwick House at auction, with its fine well-timbered park and estate. He prospered as a shipbroker and merchant miller in the period following the Repeal of the Corn Laws in 1846. This legislation introduced by Sir Robert Peel’s Conservative administration, served to supply the fast-expanding cities of the Victorian age with cheap bread from imported wheat and without tariffs in order to relieve inner city hardship.

James Watson was born in Edgbaston, Birmingham in 1818. He clearly harboured a wish one day to live a rural life. By the 1870s he was resident at Warley Hall, a country estate within sight of Birmingham which had been remodelled by Repton in the last decade of the 18th century. It was here that he kept Jersey cattle.

The effect on agriculture post Corn Laws precipitated a general decline in agricultural incomes which lasted beyond the end of Queen Victoria’s reign and up to the start of World War I. It was thus a shrewd decision to avoid relying on arable crops and establish the Berwick Herd of Jersey Cattle, a tradition renowned in the Jersey Cattle Society’s ledgers. Watson became a JP and in due course the Conservative MP for Shrewsbury from 1885 to 1892. 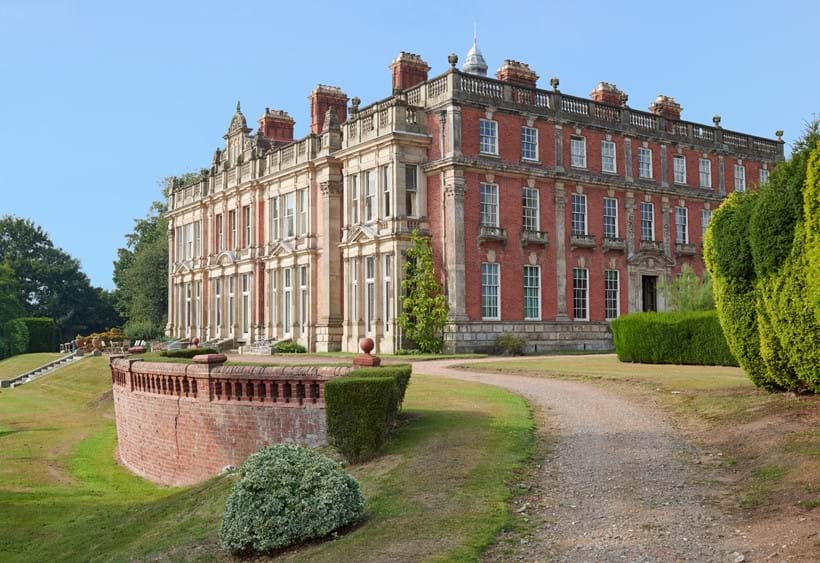 Berwick House, at the time of acquisition, comprised the splendidly neat George II Smith of Warwick Baroque brick and sculptured stone (southerly façade), together with impressive service ranges and stables. To this he added the magnificent west façade with its suite of reception rooms with plate glass windows facing a meander in the River Severn. To the east a new entrance was created with a porte- cochere topped by a belvedere tower. The alterations undertaken by George Stevens and Osborn & Reading were completed within four years and produced the ultimate in Victorian comfort and convenience. Internally the alterations included an impressive double height inner entrance hall, top-lit with medieval revival style stained glass depicting military heroes. Everywhere was embellished with exquisitely carved woodwork in the living room hall, staircase, library and dining room. This complements the Smith of Warwick former entrance hall (oak room) with its remarkable virtuoso carved door cases attributed to Warwick’s renowned carver Edward Poynton. Unfortunately, at the time of Watson’s purchase, Berwick House lost the superb Robert Bakewell wrought iron screen which was removed by the former owner Rudolph Feilding 8th Earl of Denbigh, to his seat at Newnham Paddox, Warwickshire.

With the mansion house nearing completion, by 1879 Watson turned his sights to forming a collection of suitably impressive paintings and furnishings for the recreated rooms.

Please note that items from the Berwick House Collection will also be sold across other specialist auctions. See below for further details.

Highlights from the collection include Lot 21, a pair of Dresden yellow ground double gourd vases. They stand at 35cm high and beautifully decorated with a variety of exotic birds. 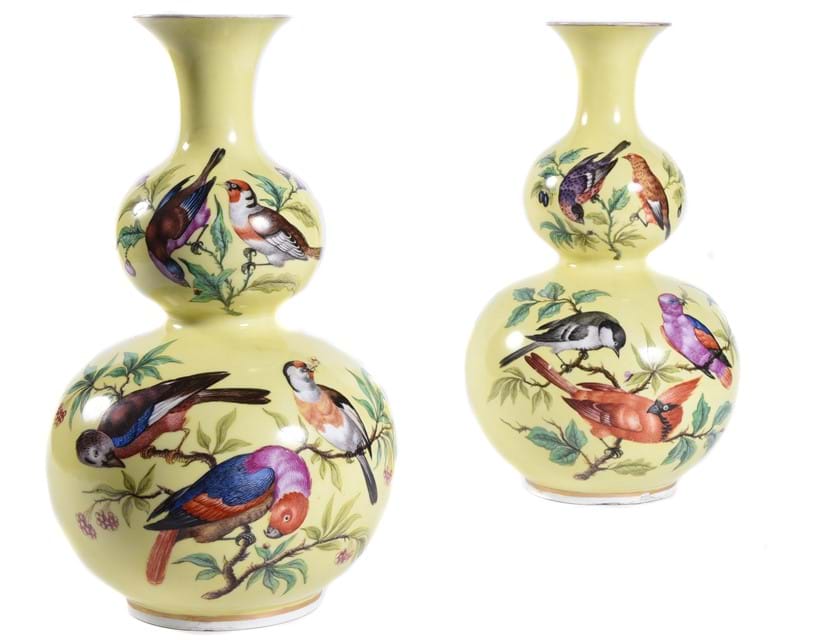 An impressive item is Lot 26, an oak refectory table. The table incorporates late 16th century and later elements and is designed with a rectangular top above a lobed frieze, with bulbous cup-and-cover supports which are then united by lower stretchers.

Continuing through the collection we have Lot 29, a late 18th century and later mahogany chair back settee. It features a Cockpit style double chair back with conforming arms. The lot comes with an old hand written paper label stating Rout Settee, from the Bath Assembly Rooms. The National Trust have an image of a 'Rout Seat' in their archive that matches the example offered here. There is also a photograph in Bath Central Library of a three-seat version. 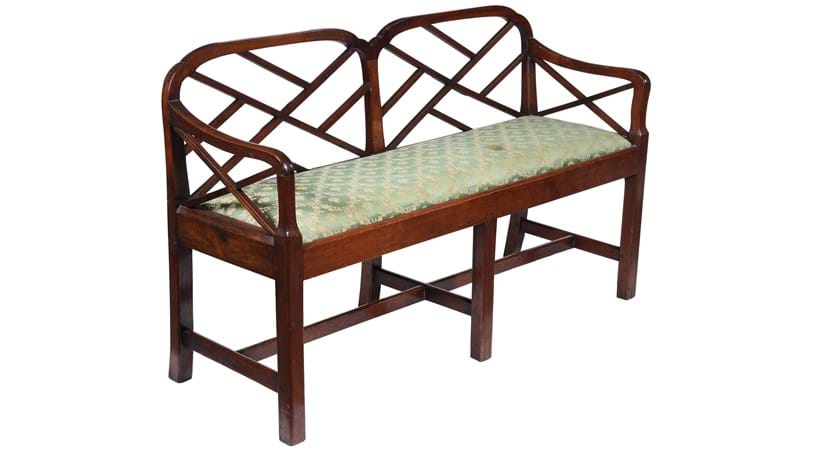 Lot 37 is a walnut, parquetry inlaid, and gilt metal mounted occasional table, circa 1900. It is attributed to Donald Ross and is designed in Louis XVI style, in the manner of Riesener.

Donald Ross (1830-1916) was one of the most celebrated Victorian furniture makers. Located at 13 Denmark Square, Soho, his firm supplied furniture to some of the most important retailers of the period including Edwards & Roberts, Gillows and John Watson of Oxford Street, as well as exhibiting in the 1851 Great Exhibition.

His work is characterised by its distinctive dot and trellis parquetry (as seen on this lot), a technique Ross developed in the fourth quarter of the 19th century inspired by the work of renowned 18th century Parisian makers such as Jean-Henri Riesener and Pierre Garnier. 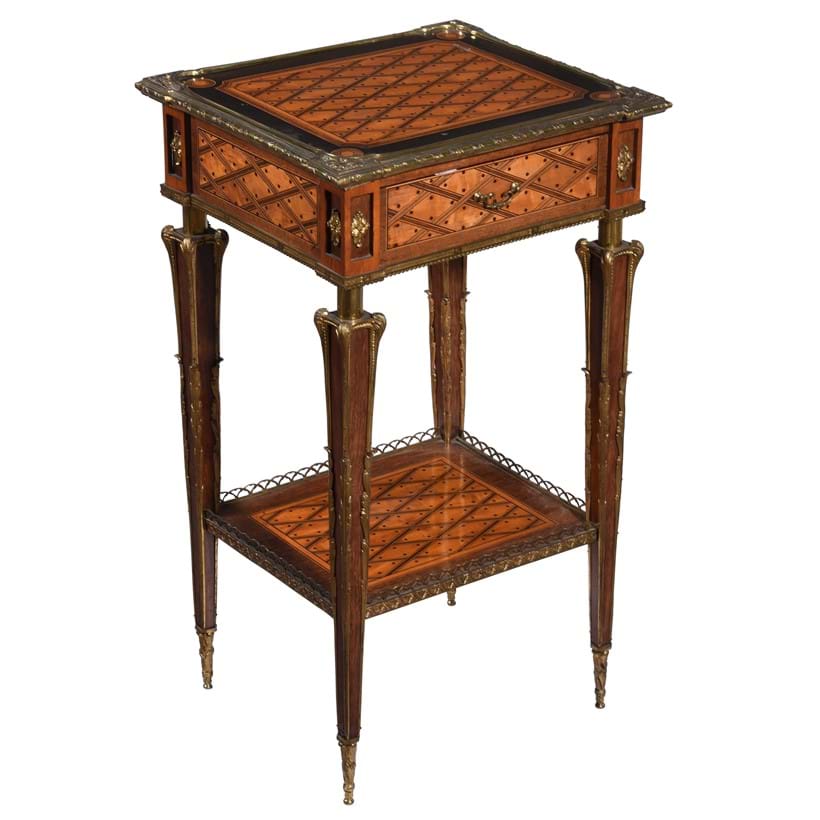 For those looking to decorate a bedroom, we have Lot 58, a wonderful suite of Aesthetic movement bedroom furniture. From the 19th century, the suite was made by Collier & Pluncknett of Warwick & Leamington. Decorated in matching style with painted and gilt panels, the suite comprises a breakfront wardrobe, a breakfront compact wardrobe, a washstand, a writing table and a half-tester bed frame with an overmantel or wall mount.

James Plucknett was originally in partnership with Frederick Collier with a showroom in Leamington Spa and workshops in Warwick. The firm advertised in various trade directories between 1872-1880 and gained many commissions from well healed local families as well as from further afield.

They advertises themselves as '...Manufacturers of rich carved furniture in the peculiar styles characteristic of the Gothic, Tudor and Elizabethan ages'. 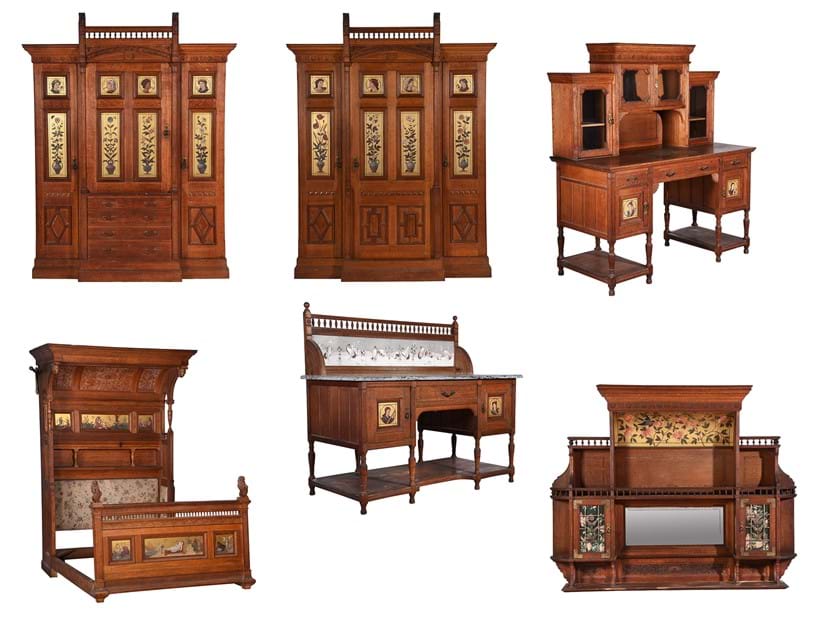 Lot 97 is a mahogany bracket clock by Robert Morris, London. It utilises an eight-day twin fusee movement which strikes on a gong, and features a silvered arched Arabic numeral dial with strike/silent to the arch. The subsidiary seconds dial is signed for the maker. 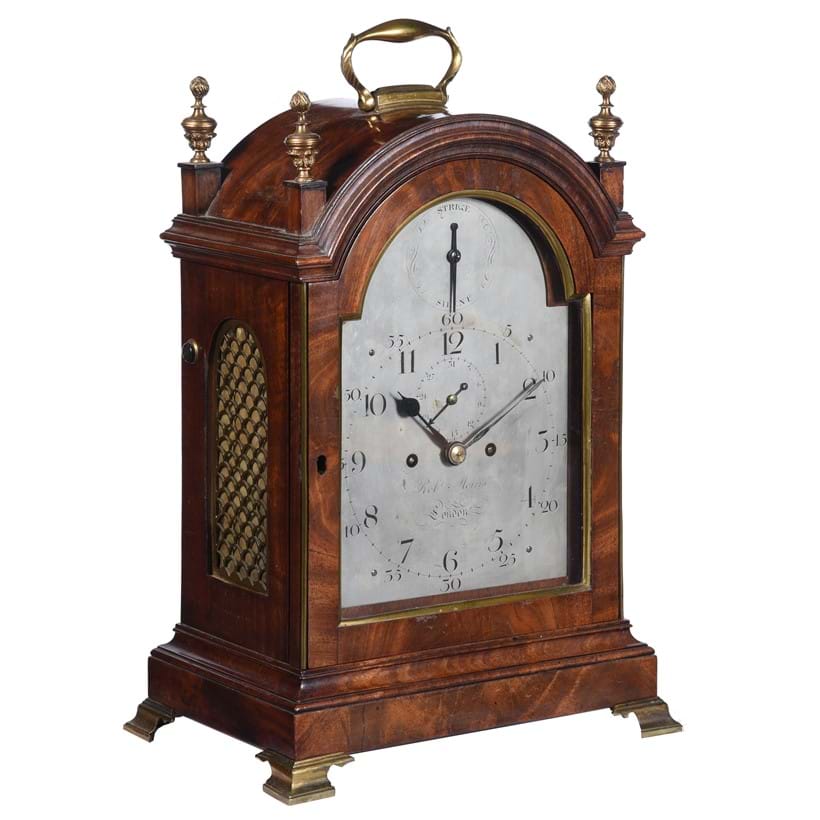 From the selection of sculpture and works of art, a highlight is Lot 130, a pair of 19th century sculpted alabaster ewers. Each features an intricate phoenix pattern handle above the ovoid bodies, sculpted in relief with foliate scrolls and masks. They are raised on a turned socle and rectangular plinth base. 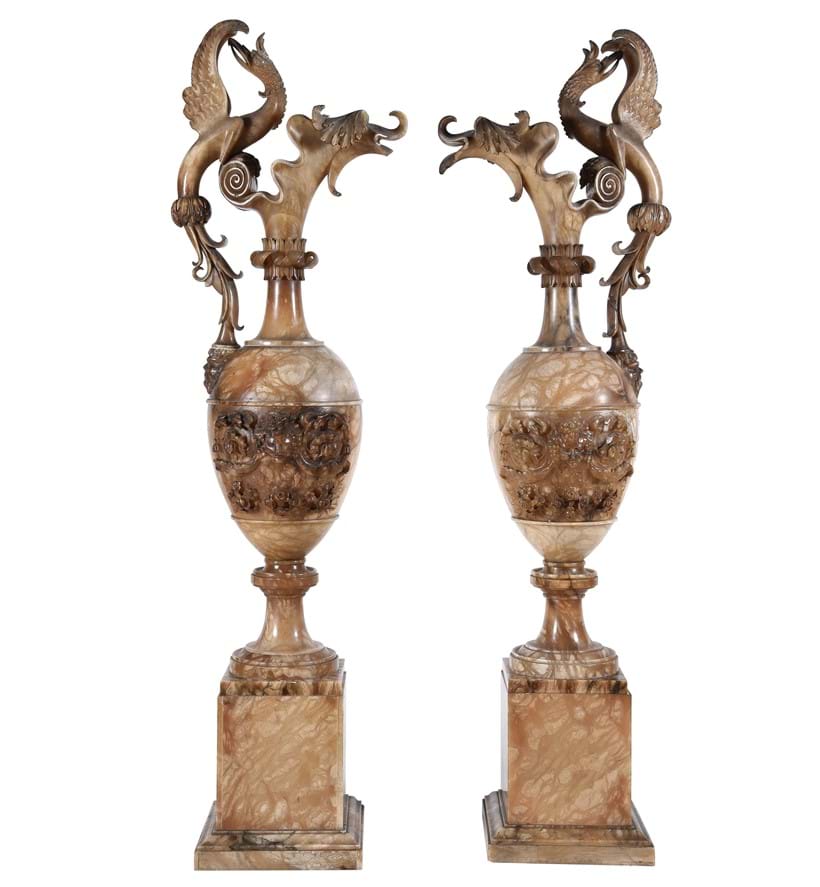 A final highlight which we will look at here is Lot 132, an imposing pair of blue tarquin marble urns-on-plinths. The urns each feature an everted rim above the bulbous body, socle and spread foot, on section cylindrical plinths. They stand at an impressive height of 179cm. 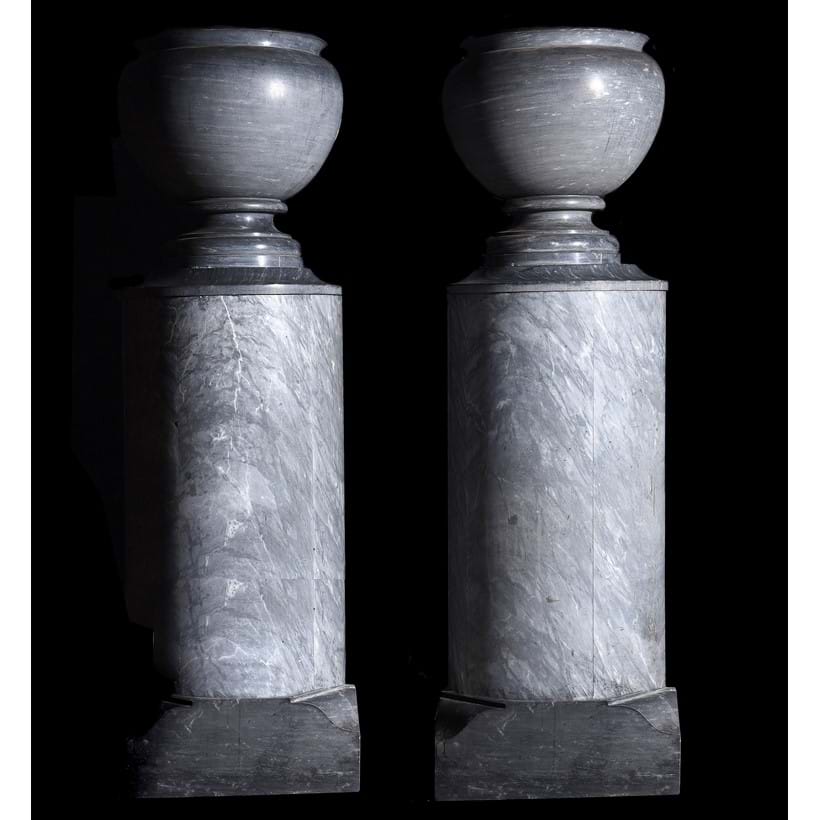 Please note there is no viewing on the morning the sale.
To book an appointment to view, please email interiors@dreweatts.com or call +44 (0) 1635 553 553
Our specialists will also be providing detailed conditions reports and additional images as requested.

Please note that items from the Berwick House Collection will also be sold across other specialist auctions: