This summer, Bloomsbury Auctions will be offering The Roger Martin Collection of Western Manuscripts and Miniatures, in their auction on Tuesday 6 July. The collection features 130 lots, including handwritten manuscripts from the 8th century, through the whole gamut of the Middle Ages, to 17th century illuminations and modern forgeries. 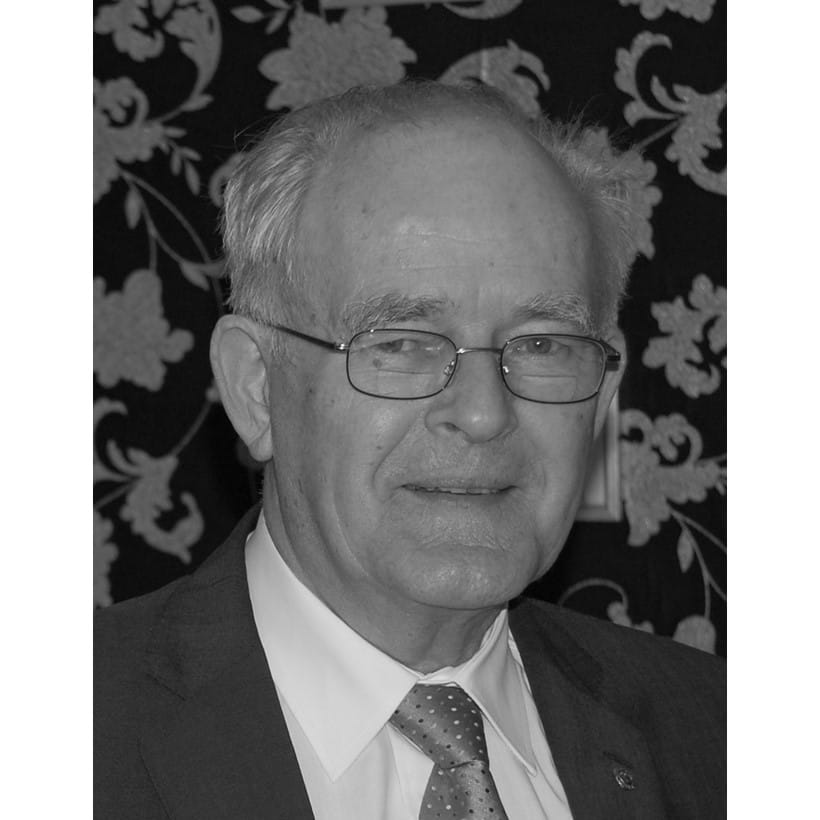 Roger Martin usually described himself to new faces in the collecting and academic world as “an impoverished enthusiast”. He came to collecting manuscripts only in his retirement, after his wife gave him Christopher de Hamel’s book, The History of Illuminated Manuscripts (1986), where he read that manuscript leaves could still be purchased at very little cost. He wrote to the author, requesting proof, was given some leads as to where such purchases could be made, and in February 1996 acquired his first leaf. 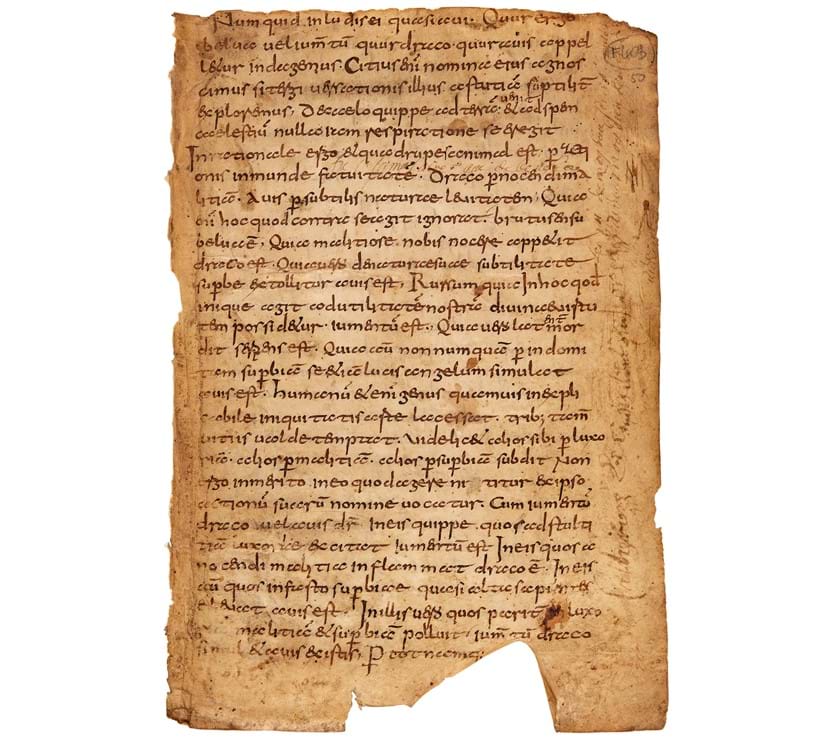 Lot 1: Leaf from a copy of Gregory the Great, Moralia in Job, in pre-Caroline Germanic minuscule, in Latin, manuscript on parchment [southern Germany (perhaps Reichenau), last decades of the eighth century] | Est. £12,000-18,000 (+fees)

Roger hardly did himself justice with the term ‘enthusiast’, and the rapid pace of his collecting – some 600 purchases in just two and a half decades – has something of the ‘vello-mania’ that Sir Thomas Phillipps used to describe his own collecting. 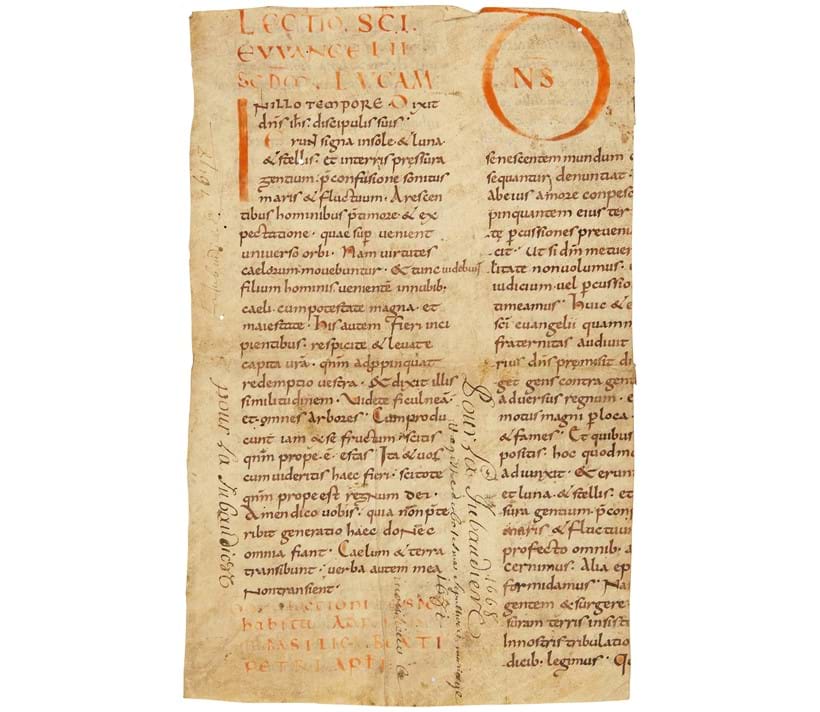 Despite this volume of acquisition, Roger’s eye was that of a connoisseur, and he frequently bought items that struck him as important or rare, and many indeed would later be shown to be so (see in particular here the breathtaking Moralia in Job leaf, written in a Germanic centre in the last decades of the eighth century [Lot 1], the elegant Carolingian leaves from a Homiliary, made in the ninth century most probably in the Loire valley [Lot 2], the tenth-century fragments of a leaf from the Liber Pontificalis, which may be among the very earliest records of the use of books in Poland or its surrounding regions [Lot 6], the cutting from the twelfth-century Pontigny Abbey copy of Gratian’s Decretum, which may have been used there by Thomas Becket and Stephen Langton [Lot 19], the fifteenth-century miniature commissioned for the grand Burgundian bibliophile, Louis de Gruuthuse [Lot 90] and a Low Countries miniature with the stamp-signature of the Masters of Otto van Moerdrecht, dating to soon after 1427 and thus a decade or so before xylographic or moveable type printing began in Europe [Lot 92], among numerous others). 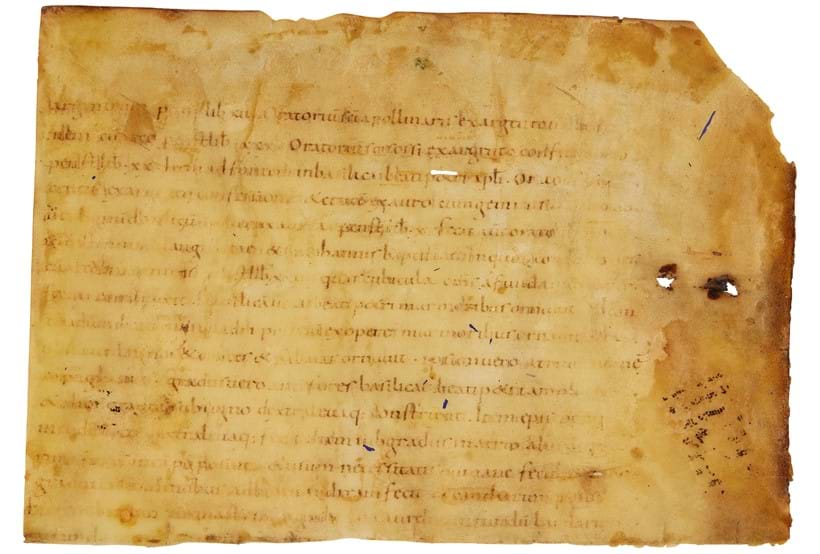 He married his eye for quality with something all successful collectors must have – substantial amounts of luck, often in stumbling over such pieces in the most unlikely of places. 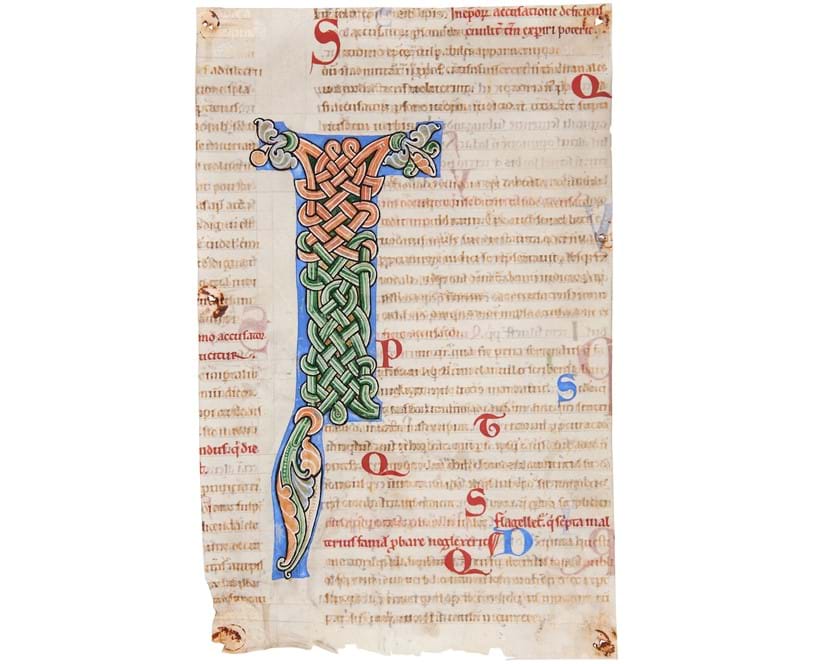 He constantly upgraded and sold on less desirable pieces, and this left him with over 350 leaves, cuttings, fragments and codices at the time of his death, all of which he carefully assembled in melinex folders in his home in Grimsby, seeking specialist help on their identification and cataloguing, and most recently putting images of some of them on the online platform flickr (using the name ‘RMGYmss’) in the hope that this might draw the maximum number of interested parties who could come forward with any new information. His manuscripts were numbered in the order they were acquired, with the prefix ‘Ins’ (for ‘insurance’), often in pencil in their lower outer corner. All of these, apart from a handful of leaves kept by his family, are here in this sale. 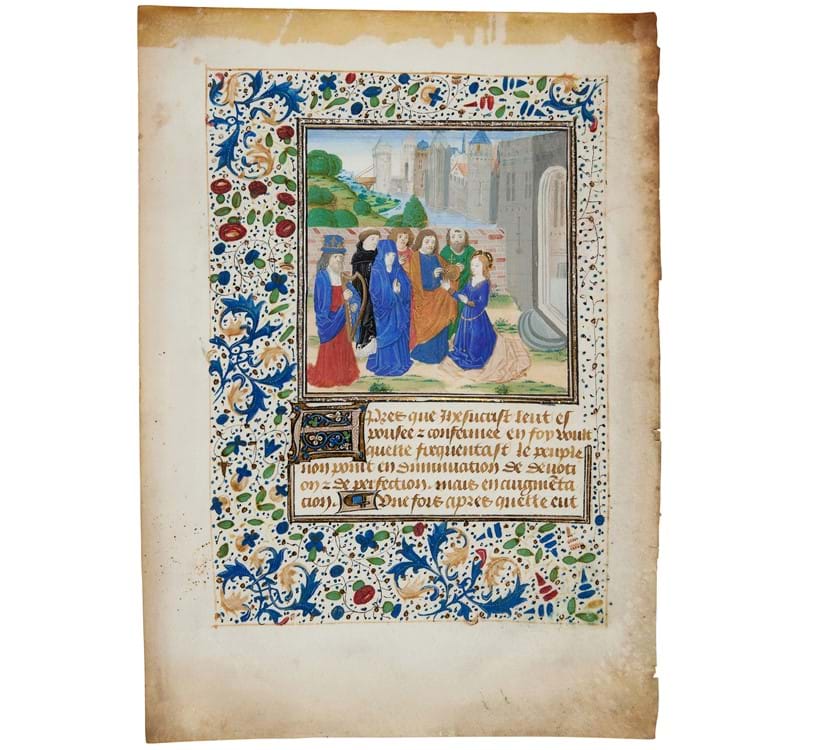 Lot 90: St. Catherine of Siena, as Christ and a host of saints appears to her, and offers her a bejewelled wedding ring, miniature on a leaf from a copy of the French translation of the Legenda Maior of Raymond of Capua, this leaf from a illuminated manuscript on parchment made for the grand Burgundian patron, Louis de Gruuthuse [French Flanders (doubtless Bruges), c. 1475] | Est. £20,000-30,000 (+fees)

His collection, along with his family, was one of the mainstays of his life, and his consuming passion for it remained strong to the very end. We can think of no better way to end this brief memorial to him than in his own words, written when he contacted us in early December 2019 to tell us that his condition was increasingly serious, but he had no intention of stopping: “I have no idea just how long the rest of my life will be, but I am sure that I will know or realise when it is about to come to an end... in the meantime it is my intention to carry on as normal enjoying the rest of my life and collecting manuscripts”. 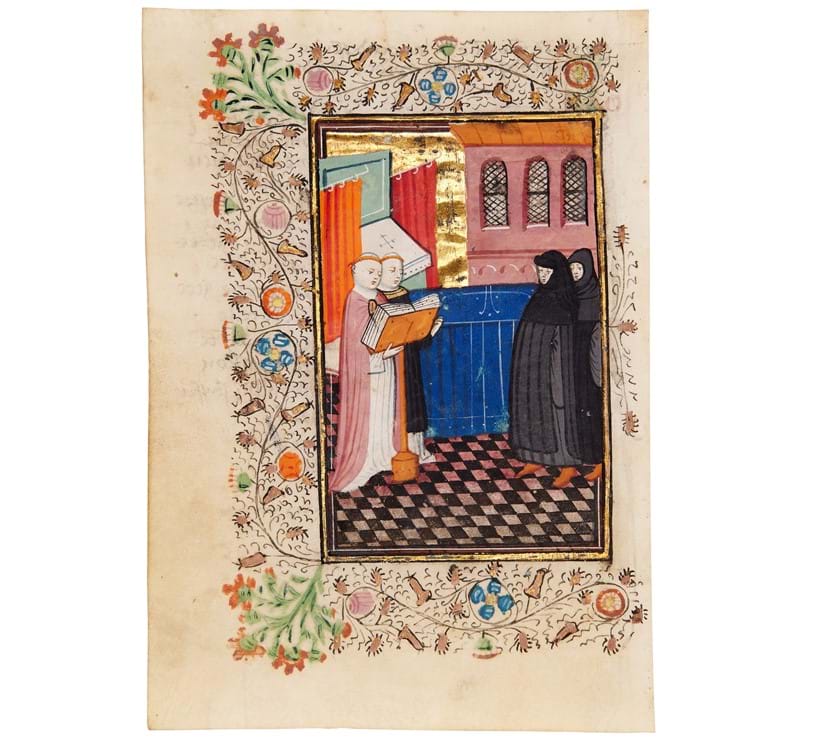 Lot 92: Leaf with a miniature from a Book of Hours, with stamp-signature of the Masters of Otto van Moerdrecht, from an illuminated manuscript on parchment [southern Netherlands (Bruges), soon after 1427] | Est. £3,000-5,000 (+fees)

AUCTION DETAILS
Tuesday 6 July | 12 noon BST
This is a live online auction with an auctioneer.

Viewing in person is by appointment and in accordance with Covid-19 regulations.