Coming up on 21 September is our Transport Sale. Ahead of the sale, we are delighted to introduce Martyn Pring as part of our extended transport team. Aside his knowledge on live steam and model engineering lots, Martyn is a marketing and tourism researcher and a published author on transport and travel histories, with a particular interest in travel art and related collectibles, ephemera, and memorabilia. Here he paints a picture of a new industrial France and the period which surrounded the early years of the automobile industry in the country, including the posters and marketing material vehicle manufacturers commissioned to sell their wares. In the Transport Sale we have a wonderful collection of evocative prints from a titled gentleman. The styles certainly capture a mood and period swan song that was to disappear. 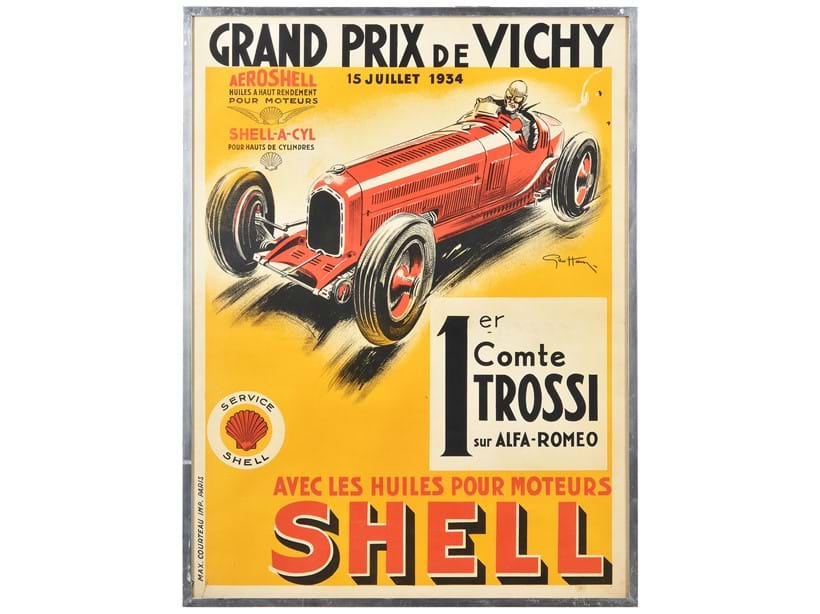 Baron Haussmann’s fifteen-year renovation of Paris - demolition of an old side-streeted world, the levelling of land and then reconstruction - was considered the apex of 19th century European advancement. Very simply the old city was transformed as a result of modernisation and modification into a new city of flowing traffic. Main railway stations were sited between the inner and outer boulevard rings with new thoroughfares of air and light designed for the movement of traffic and the flow of pedestrian walkers, horse-drawn cabs, and private carriages. Life was to get even busier with the arrival of the internal combustion engine and the motor car as must have accoutrements in the next stage industrial and technological expansion. By the end of the 1800s the horseless carriage was the ultimate expression of Belle Époque France.

Heaving Paris avenues and boulevards, basking in cultural expression and optimism of the age, were conduits of bourgeoise business interest that oversaw the introduction of new forms of retailing - the department store replacing many individual shops - high-end grand palace hotels, and a contemporary fashion of open-air hospitality. The new boulevards supplied both goods and customers made up of an expanding and well-educated Parisian intelligencia, mercantile elites, and a growing band of international tourists journeying the English Channel and North Atlantic. Imagery involving the motor and early charabancs outside of these establishments only fuelled the French capital’s reputation.

Impressionist painters like Camille Pissarro saw Paris in a different way. His hand envisioned Boulevard Montmartre at different times of the day and seasons of the year, but its central characteristic was a city of open spaces teeming with life. Almost by accident illustrators and painters absorbed the motor car into a distinctively characteristic cultural backcloth. They were remarkable in so far as they left such a memorable snapshot of period French life.

Ironically, the French were rather late into mid-Victorian railway expansion, and even later in the building of great ocean palaces that traversed the North Atlantic - their first four funnelled liner France made her maiden voyage within days of Titanic’s Southampton departure. But in the development of the piston engine the French excelled. Not just the motor car, but in embryonic aircraft manufacture as well. Paris, with the Eiffel Tower in the background, became a show stop of spectacular aerial displays that gripped the capital’s residents and visitors. 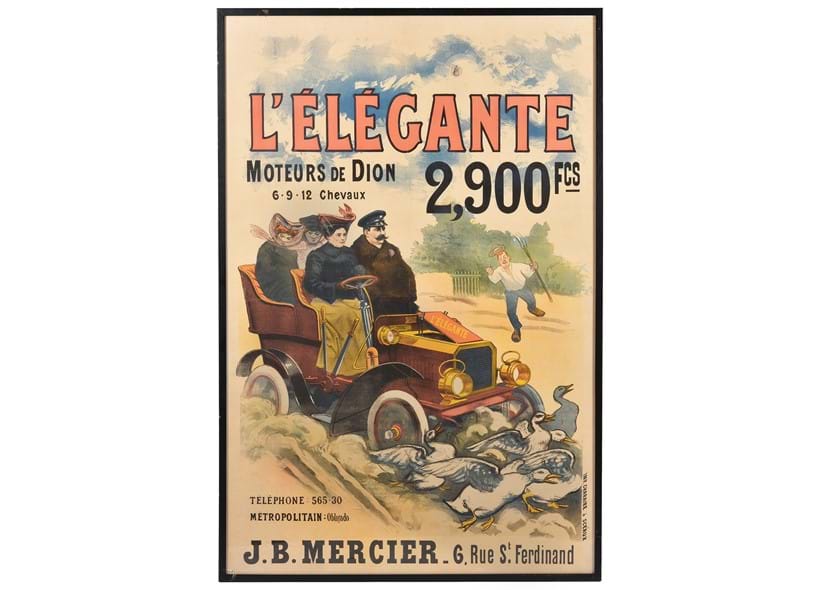 The new horseless carriage phenomenon became a status symbol of the upper-classes - the only society group who could afford them at the time. By the early 1900s the utilisation of well-dressed people sat in cars, invariably driven by the man of the house or chauffeur, was a well-trodden creative path. The L’Élégante advertisement appears an exception as women were perfectly capable of driving motor vehicles. And in Britain much in tandem with the sentiments of more outspoken and vociferous Suffragette Movement members who would never lose an opportunity to remind men of their driving qualities.

Driving a motor car carried an elevated status in life. Cars were symbols of civilised progress and triggered a new trend in elegance becoming a battle ground of commercial rivalries between engineers and national prestige that besotted pre-Great War Europe. Cars became more powerful incorporating rear seats to accommodate four adults. And in so doing the French portrayed a certain panache and style not just in their vehicles but in the creation of advertising and promotional material to tap into the aspirational wants of a privileged class. More importantly, the motor car was to become a beacon of 20th century luxury industry management. The French saw themselves as custodians of luxury and whilst they were destined to be rather good at managing deluxe brands, their vehicle manufacturers never made the transition in the same way British luxury marques made. 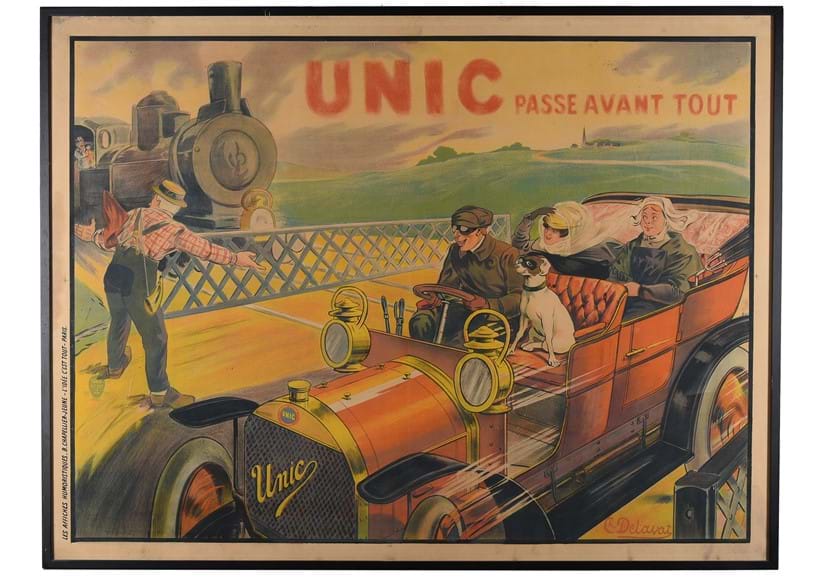 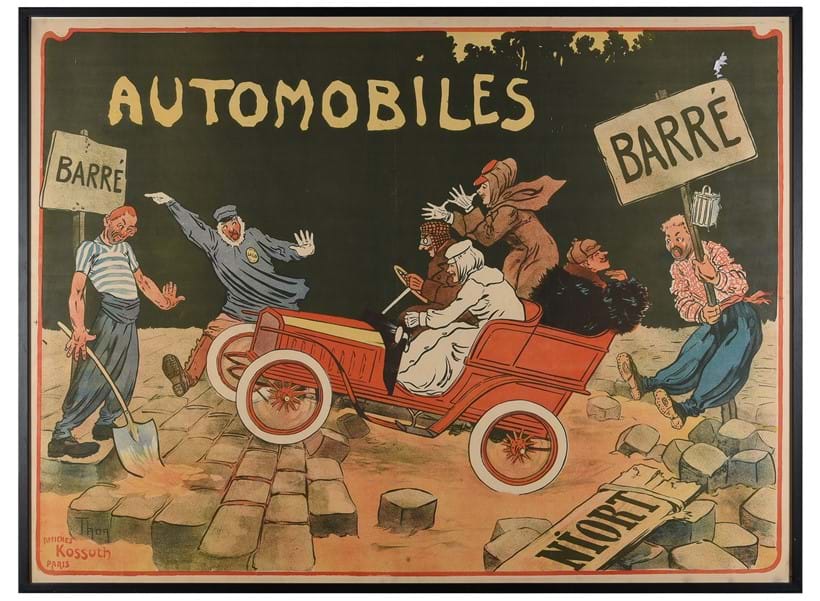 At the turn of the century cycling was big business both in Britain and France. British railway companies operating cross-channel steamers made substantial returns ferrying adventurous cyclists heading off on cycling holidays in France. Hardly surprising therefore well-established French bicycle manufacturers (and retailers) should not try and make the leap towards motorised production whether for two, three or four-wheeled vehicles. Many of them, of course, did not last the course of time with many vehicle manufacturer names biting the dust over the years. The early 20th century is littered with such names no longer around as businesses failed to adjust, and make commercial gains, or were simply just taken over by bigger concerns. 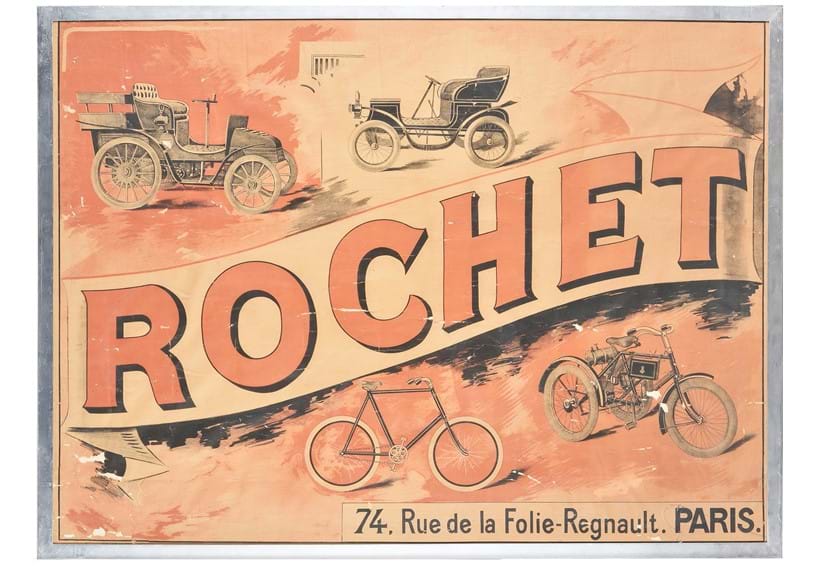 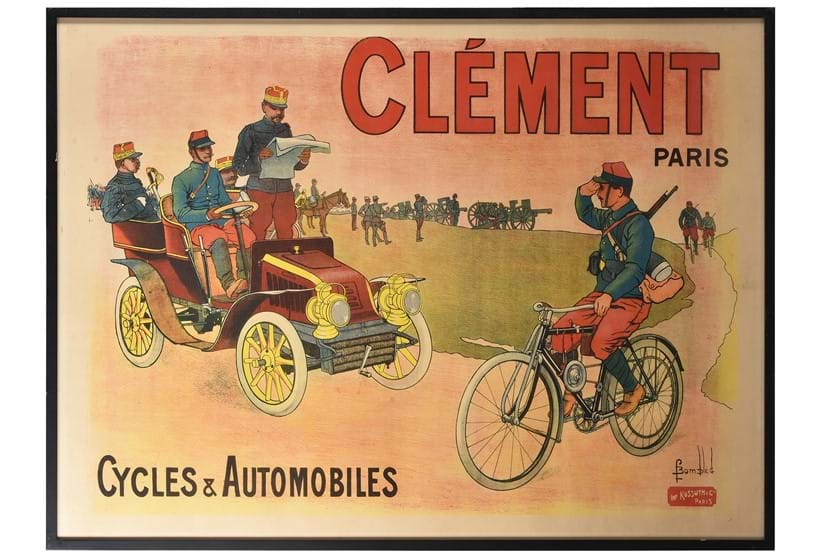 Two favourites from the sale are examples of how during the inter-war years fuel suppliers jumped on the band wagon and flirted with the notion of speed in the development of their advertising. Something Shell were famously associated with, but these two French language Castrol posters capture the essence of both aviation and land-based distance, endurance, and speed records. 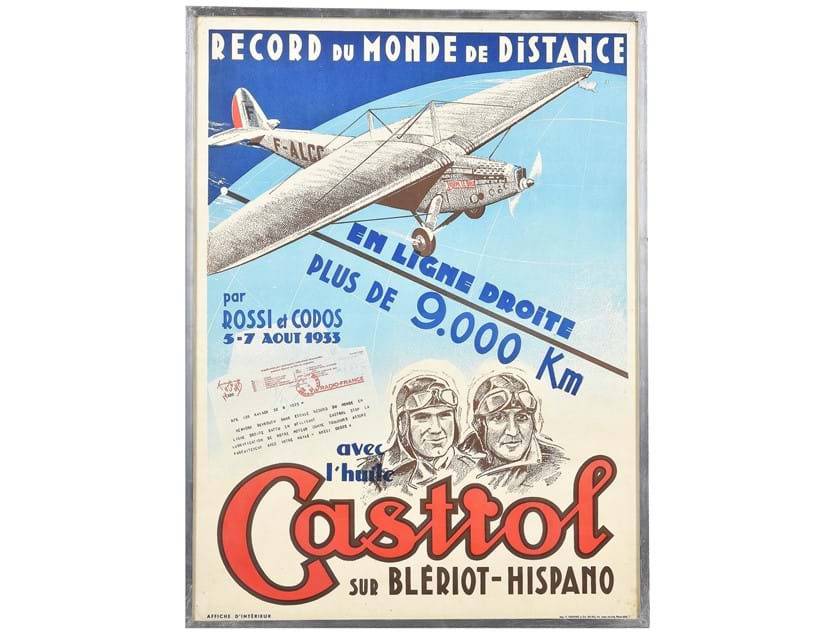 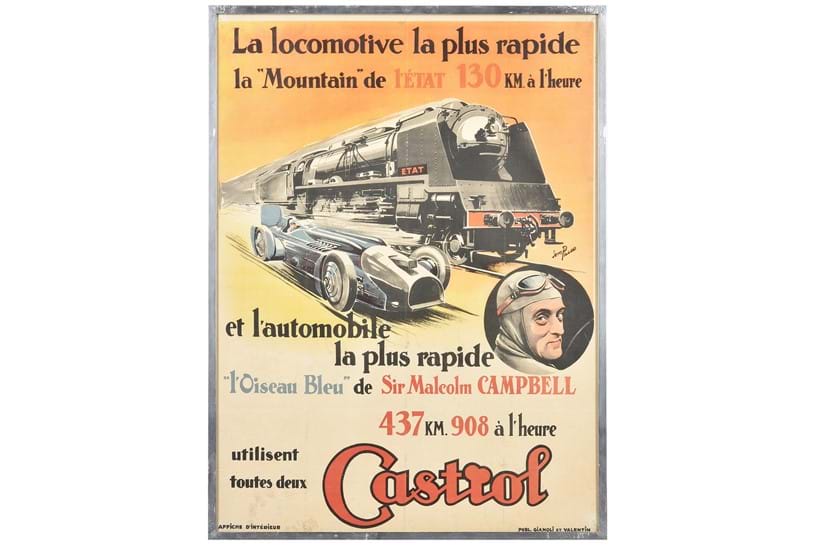 Speed was also not lost on car manufacturers. By this time Renault was a household name in France. The country’s geographical spread inferred open roads - much in contrast with Britain’s winding country lanes that filled many a vehicle manufacturers’ promotional marketing literature - allowing the company to adopt a creative interpretation extolling speed and the sheer thrill of the highway race. In today’s world of speed limits, grid locked urban streets and even more powerful cars, such ideas look quaint. 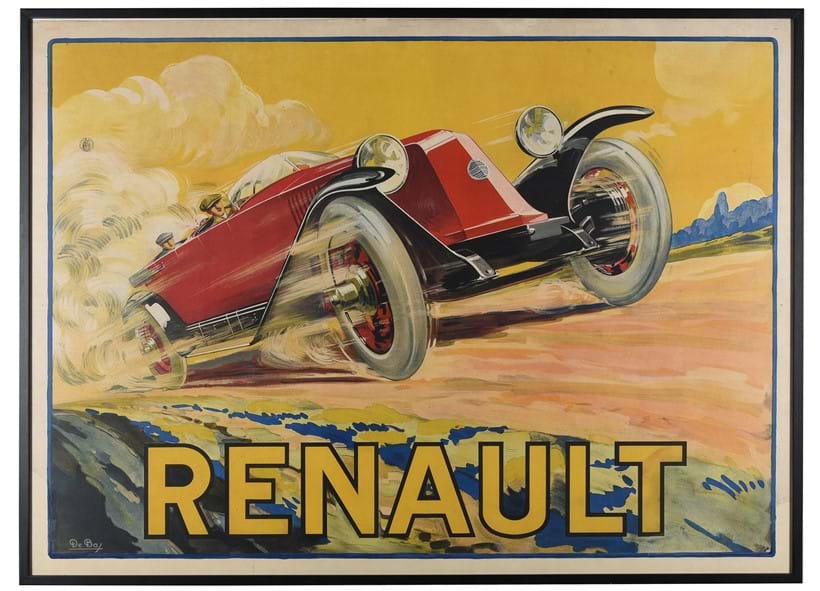 If you’ve been intrigued by this post and wish to discover more on how the motor car and sophisticated marketing imagery transformed the places we visited, then head to the travel articles section at https://martynpring.co.uk

Visitors are encouraged to wear a face covering while in the building, use the hand sanitiser provided on entering and observe social distancing rules. We may need to restrict the numbers of visitors viewing at one time, so if you would prefer to book an appointment in advance, please contact us. To book an appointment to view, please email: transport@dreweatts.com or call 44 (0) 1635 553 553.