Our Interiors auction on 12 May features a number of private collections including the Collection of Countess Veronica Munster. Comprising over 55 lots (lots 145-201) from antique furniture to decorative objects for the home, the collection offers a wonderful selection of pictures, ceramics and furniture. Ahead of the auction, we take a look at some of the highlights. 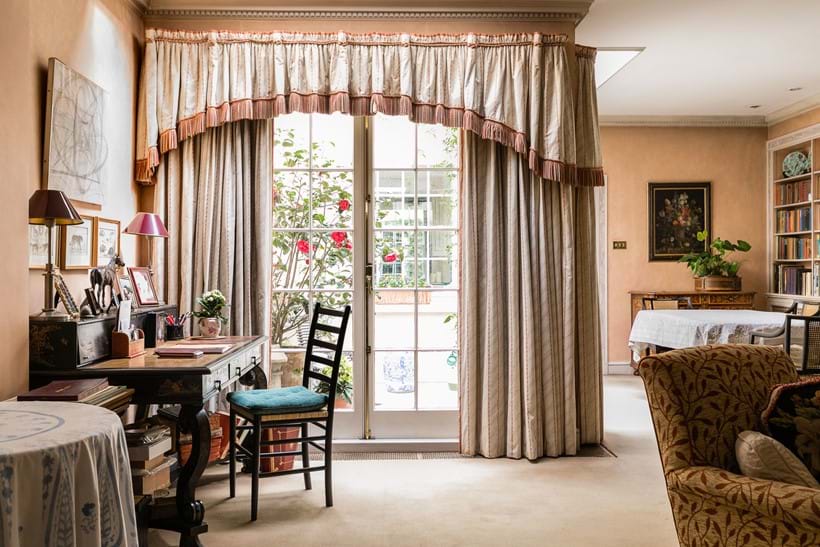 Countess Veronica Munster was born Veronica Naylor-Leyland in 1932, only daughter of Sir Albert Edward Herbert Naylor-Leyland, and Marguerite de Belabre. She grew up in their family home, Nantclwyd Hall in Wales, as well as Hyde Park House in Albert Gate, Knightsbridge.

When Veronica married Count Peter Munster in 1955, they moved to Germany and spent their married years restoring his ancestral home, Schloss Derneburg, near Hanover. Schloss Derneburg has a 1000-year history with a rich tapestry of uses and occupants. In 1815 the secularized monastery and its estate was given by King George III to Ernst Friedrich Herbert Graf zu Münster for his contributions at the Congress of Vienna, thus establishing it as the Munster family seat. Ernst Friedrich, as well as his son, Georg Herbert commissioned the renowned Hanoverian architect Georg Laves to redesign the aged monastery into a stately home, as well as landscaping the grounds in the style of a grand English country house. Veronica, Peter and their children lived in Derneburg in apartments decorated in English style, furnished with the collections amassed by their ancestors. In 1975 Schloss Derneburg was sold and Countess Munster moved to London where she resided until her death in 2019. Many of the items in the sale came with her from Derneburg. Schloss Derneburg is now an art museum owned by the Hall Art Foundation. 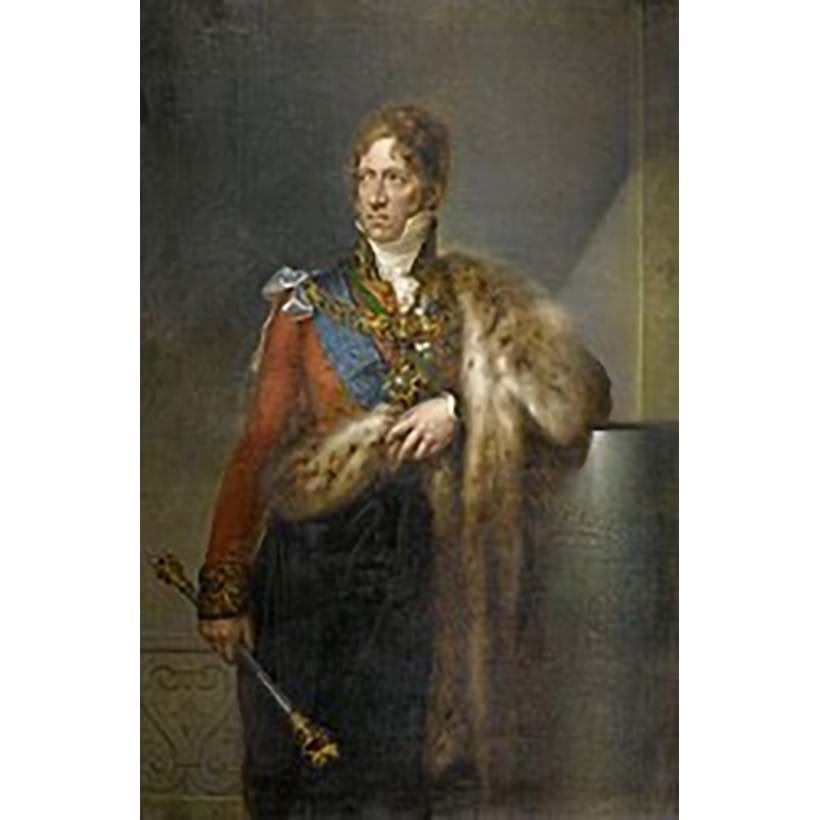 The Munster’s Anglo-German background plays a significant role in the curation of their collection that has developed over nearly two centuries, with many of the works representing artists and furniture makers from both countries. The young Ernst Friedrich accompanied the sons of George III on an extensive grand tour of southern Europe, awakening an affinity for international styles that the family has continued to nurture, which is reflected in the exhibited collection. He is known to have collected intaglios and the Italian specimen marble table top, Lot 189, is believed to be a souvenir of these travels. 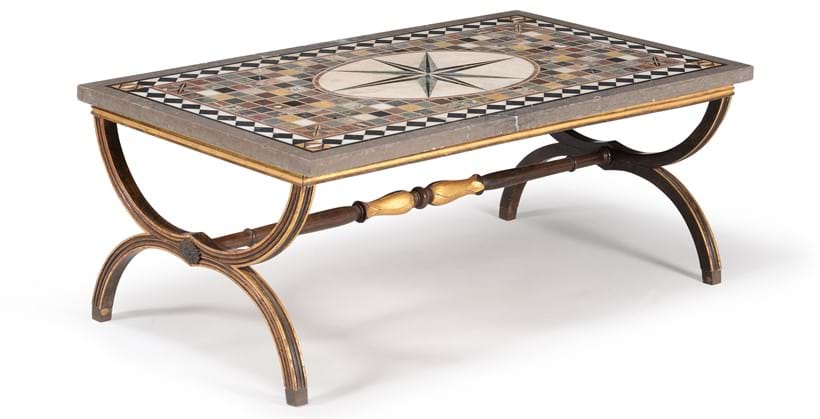 As a painter himself, Ernst Friedrich was also a personal friend and student of the artist Johann Heinrich Wilhelm Tischbein, thus establishing a strong relationship with the arts that would prosper for generations to follow. The portraits of ‘Commandeur von Munster’ (Ernst Friedrich Herbert Graf zu Münster), Lot 147, and Catarina de Medici, Lot 148, probably originated from the time of their friendship. 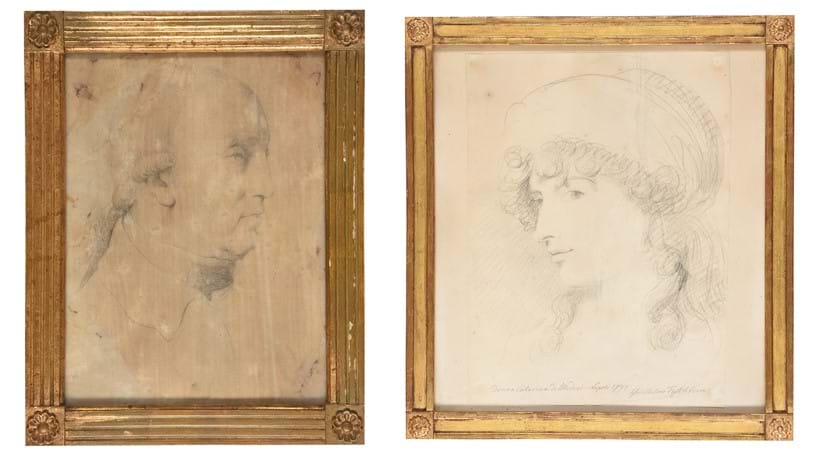 The collection starts with Lot 145, an impressive oil on canvas by Ernst Friedrich Herbert zu Munster, View from the Ziegelberg (Brick Hill) onto Derneburg Castle.

Schloss Derneburg's history dates almost a thousand years. Originally a fortified castle it became a religious sanctuary in 1130. Over the centuries it served the Augustinian, Cistercian and finally Lutheran orders, as a nunnery and later a monastery. After the defeat of Napoleon in 1815, Schloss Derneburg and its estates became part of the Kingdom of Hanover, under the rule of George III of England. He gifted them to Ernst Friedrich Herbert Graf zu Münster in appreciation of his services to the crown at the Congress of Vienna. As ministers to both George III and George IV members of the Munster family became increasingly anglicized over the following 150 years but retained ownership of Schloss Derneburg from 1816 until 1974 when it was sold to the painter Georg Baselitz by Count Peter Munster, Countess Veronica's husband from 1955 -1975. It has been the home of the Hall Art Foundation since 2006. 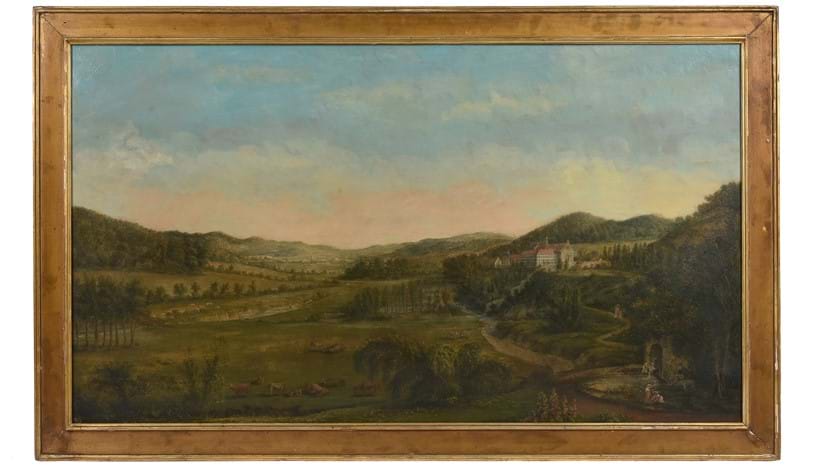 The collection also features a lovely array of antique furniture, including Lot 152, this Continental gilt wood wall mirror. From the late 18th century or early 19th century, it is intricately designed with a foliate carved frame with a series of mirrored panels. 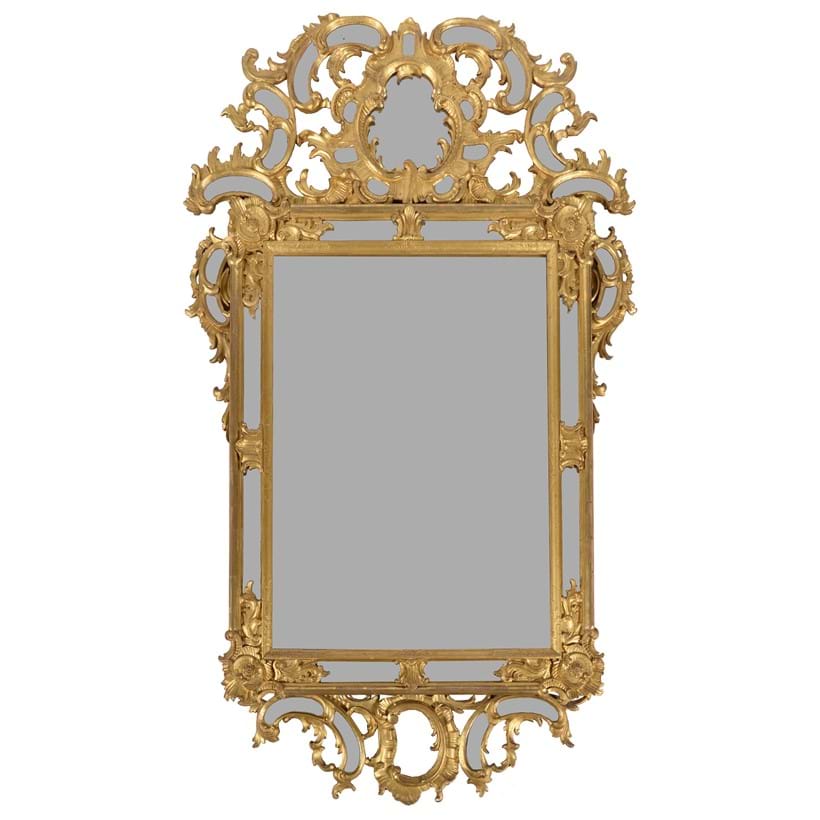 Continuing through the collection, we have Lot 162, this Chinese Export black lacquer and gilt chinoiserie decorated cabinet on stand from the first half of the 19th century. It is decorated throughout with traditional village scenes. The arched cabinet is designed with a pair of panel doors which open to an arrangement of small drawers and pigeon holes around a pair of sliding pierced panel doors. 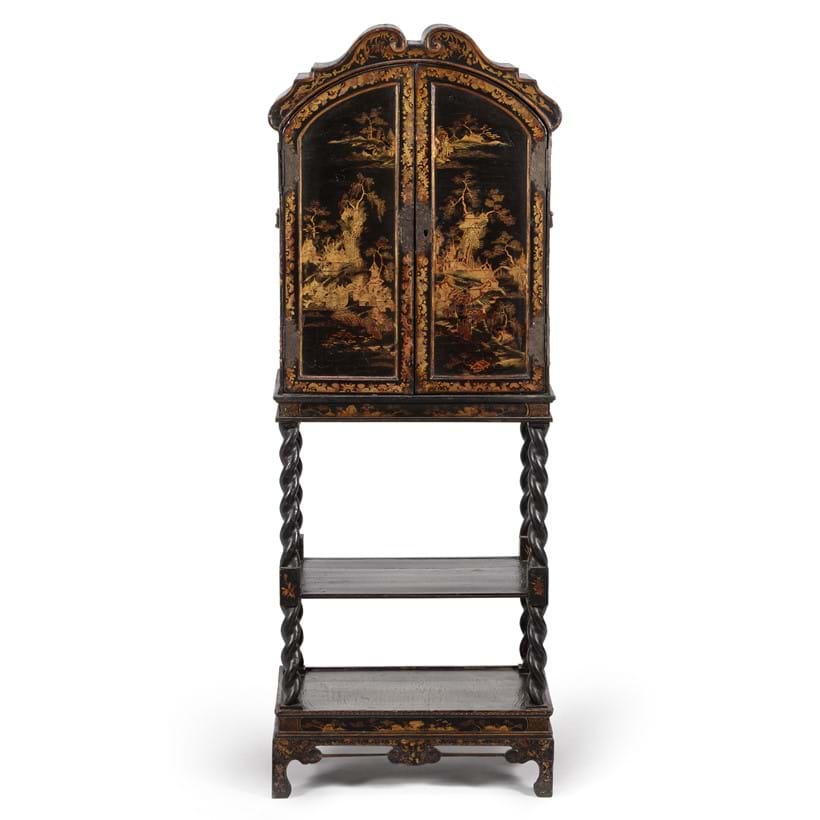 We then have Lot 171, this Regency black lacquered and gilt chinoiserie decorated desk, circa 1815. It is decorated with figures, animals and village scenes. The rectangular top features a tooled leather inset with a raised section to the rear edge. This then incorporates two hinged panels which open to an arrangement of pigeon holes and shelves. The desk then features a further three frieze drawers. Some interesting pieces are Lot 180, a matched pair of late 19th century Victorian tulipwood, parquetry and gilt metal mounted two tier oval etageres. They are designed in Louis XVI style, in the manner of Donald Ross.

Donald Ross (1830-1916) was one of the most celebrated Victorian furniture makers. Located at 13 Denmark Square, Soho, his firm supplied furniture to some of the most important retailers of the period including Edwards & Roberts, Gillows and John Watson of Oxford Street, as well as exhibiting in the 1851 Great Exhibition.

His work is characterised by its distinctive dot and trellis parquetry (as seen on this lot), a technique Ross developed in the fourth quarter of the 19th century inspired by the work of renowned 18th century Parisian makers such as Jean-Henri Riesener and Pierre Garnier. 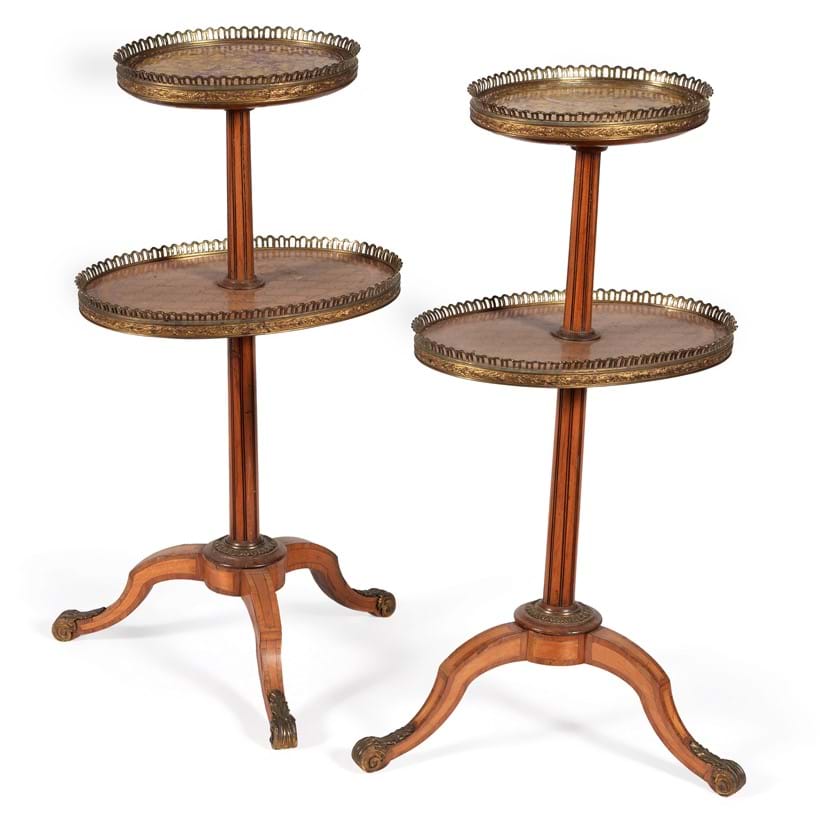 The collection also features a delightful array of British and European ceramics. Lot 200 is particularly charming, featuring two similar 20th century Wemyss pottery (Griselda Hill) models of large pigs. One is painted black patches, while the other is painted with thistles. 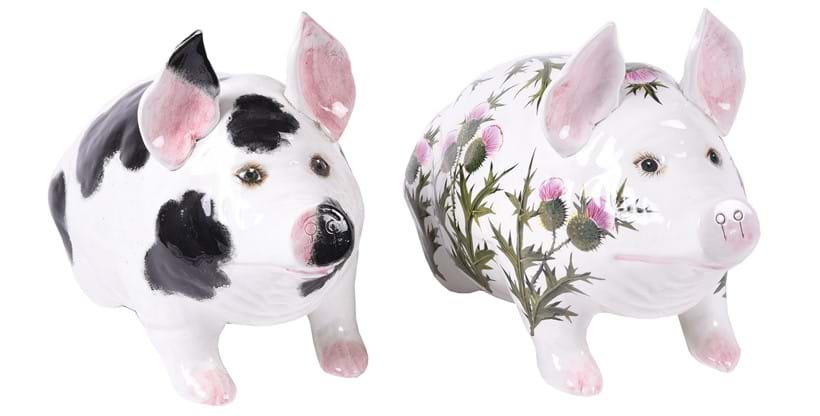