A mesmerising painting by the artist Charles Stuart (1854-1904), is one of an array of stunning works with a Scottish link being offered in Dreweatts’ Old Master, British and European Art Sale on 14 December 2021. The work titled Stag and Doe in a Highland Landscape draws the viewer into a serene setting where the dramatic light contrasts with the hues of the Scottish landscape. A doe in the forefront stands calmly as if the observed is watching the observer. Charles Stuart was an English still life and landscape painter who painted and exhibited widely throughout Britain. 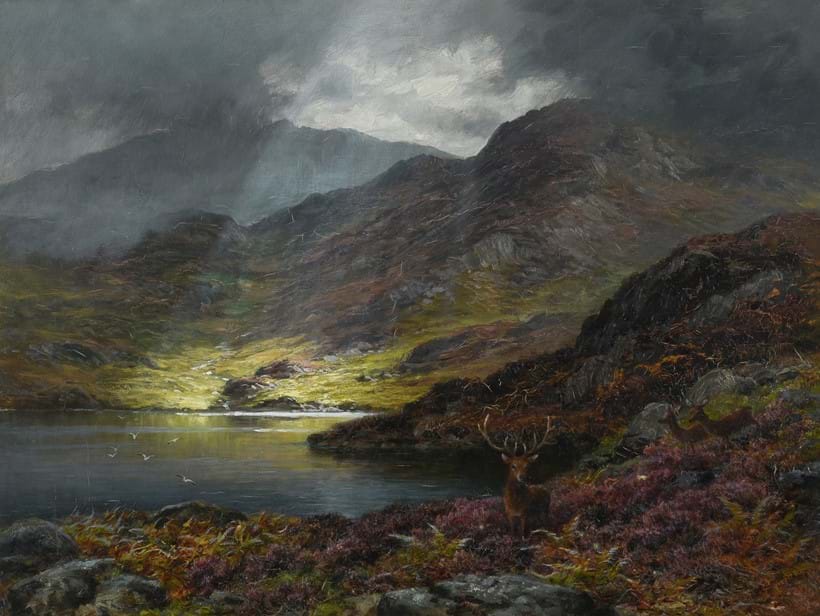 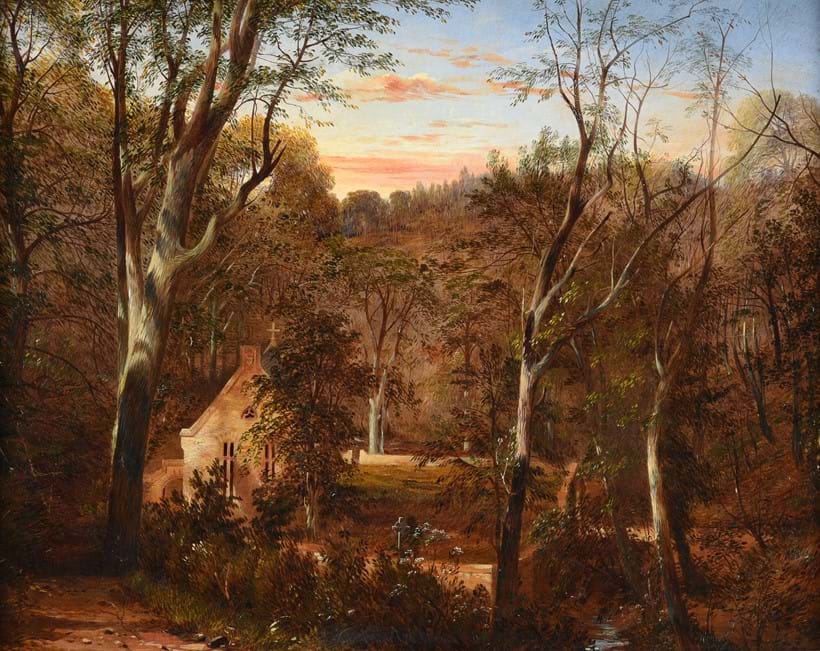 He designed the circular temple covering St Bernard's Well by the Water of Leith in 1789 and bridges at Almondell, West Lothian, and Tongland, Kirkcudbrightshire in 1815. He was also one of a select few to be invited to submit proposals for the expansion of Edinburgh New Town. He went on to set up a drawing school, to encourage his methods, which brought fresh perspective to a new generation.

The work in the sale, of a castle prominently standing in surrounding fields, with travellers resting at the foreground, affords a certain drama. The figures are small, the landscape a murky green allowing for the architecture and the grandeur of the building to stand out. Created in oil on canvas, it is estimated to fetch £3,000-£5,000 (Lot 201).

A 19th century Scottish School painting titled The Old Chapel in the Glen, Aldbar Castle, Forfarshire transports us to a peaceful, secluded area of woodland known as Den of Aldbar, with a small chapel set within a small graveyard. The original chapel was founded in the 13th century and in c.1850 its’ ruined remains were rebuilt into a mortuary chapel. It sadly sits again in ruins, in one of the most beautiful spots in Scotland. A delightful scene, captured in oil on canvas, it is estimated to fetch £300-£500 (Lot 200). 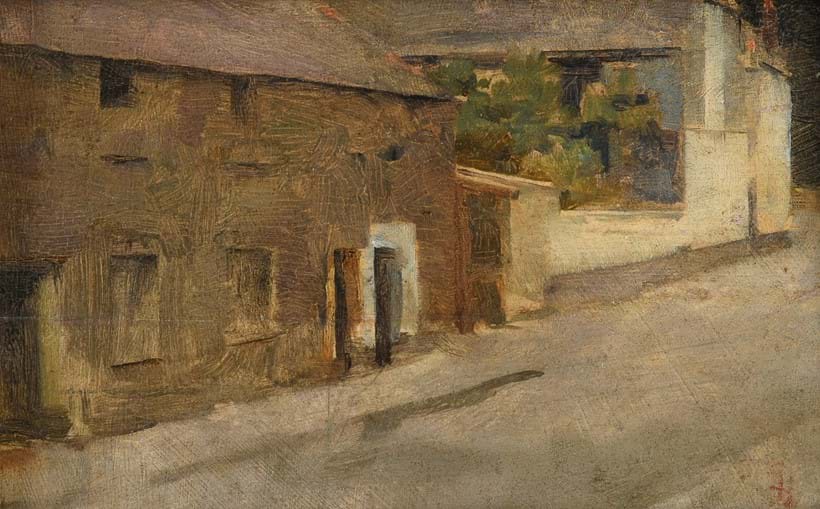 A Scottish Street is attributed to the Italian artist Telemaco Signorini (1835-1901), a member of the Macchiaioli group of painters, who turned away from academic subjects and looked for a new poetical interpretation of the natural landscape. Telemaco travelled to Scotland in 1881 and his most celebrated picture of this period, Leith is in The Palazzo Pitti in Florence. The oil on panel work which captures the natural light, shade, and colour of the outdoor setting evokes the work of the French Impressionists that would follow. It carries an estimate of £1,500-£2,000 (Lot 333).

The sale also features an impressive landscape work titled Highland River Landscape. The painting is by John Brandon Smith (1848-1884), a Royal Academician who exhibited consistently between 1860 and 1874. Following the romantic trend in Europe his favoured topics were waterfalls, mountain lakes and sweeping landscape works of Scottish and Welsh rivers and waterfalls and mountain lakes, with the occasional figure captured in the scene. The oil on canvas carries an estimate of £1,500-£2,500 (Lot 204). Another oil on canvas work by John Brandon Smith in the sale is titled The Angler and shows a man fishing knee deep in water, surrounded by a beautiful mountainous landscape. It is estimated to fetch £700-£1,000 (Lot 205). 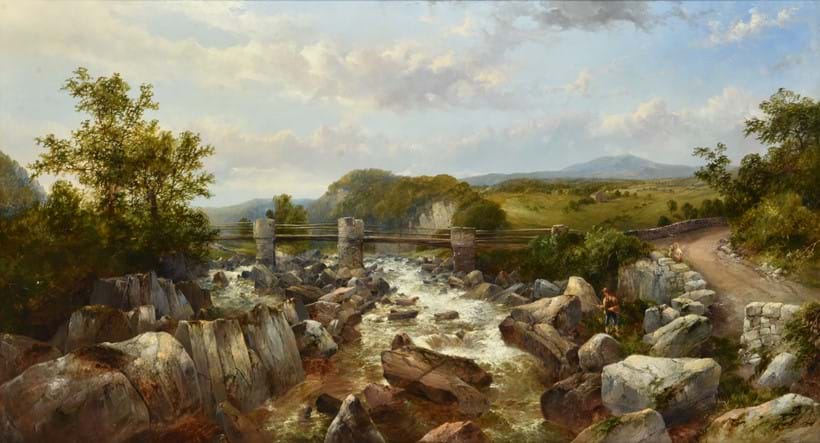 Another Scottish School work in the sale is an oil on panel work titled Figures by a Stream, Dunglass House, East Lothian.

The building stands majestically in the background bathed in light, with a pastoral scene in the foreground with figures visible by the stream. It is estimated to fetch £300-£500 (Lot 199). 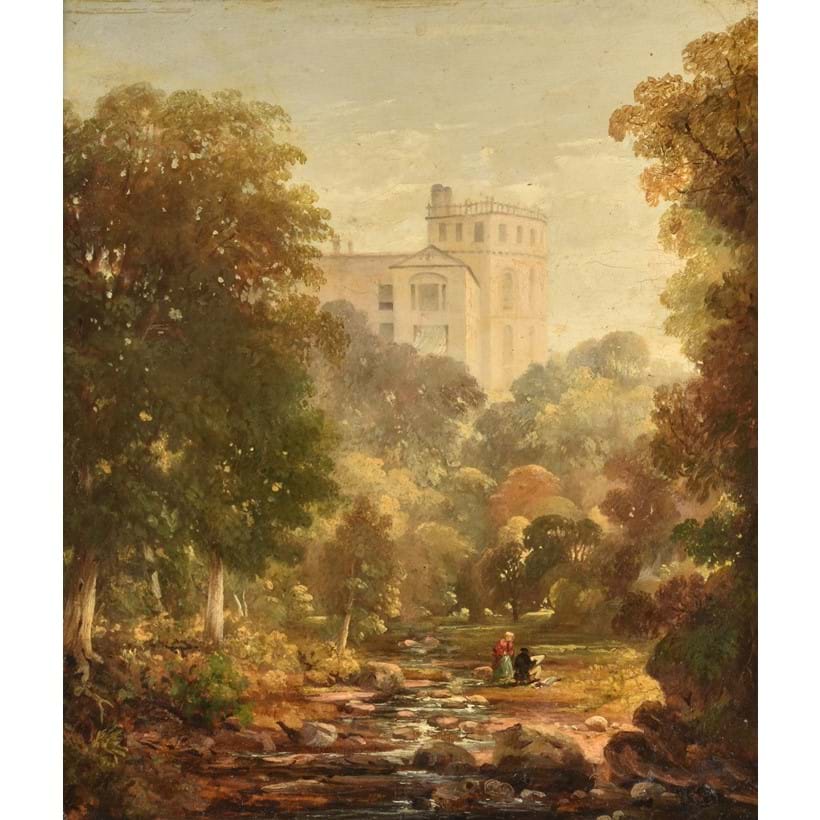 Three Cows in a Highland Landscape by the artist Edward Henry Holder (1847-1922) offers a glimpse into the colours and majesty of the Scottish highlands, with the rugged cows in the foreground and the spectacular scenery that surrounds them. Edward Henry Holder was well-known for his landscapes and exhibited them at the Royal Academy from 1872 to 1873. This oil on canvas carries an estimate of £600-£800 (Lot 203). 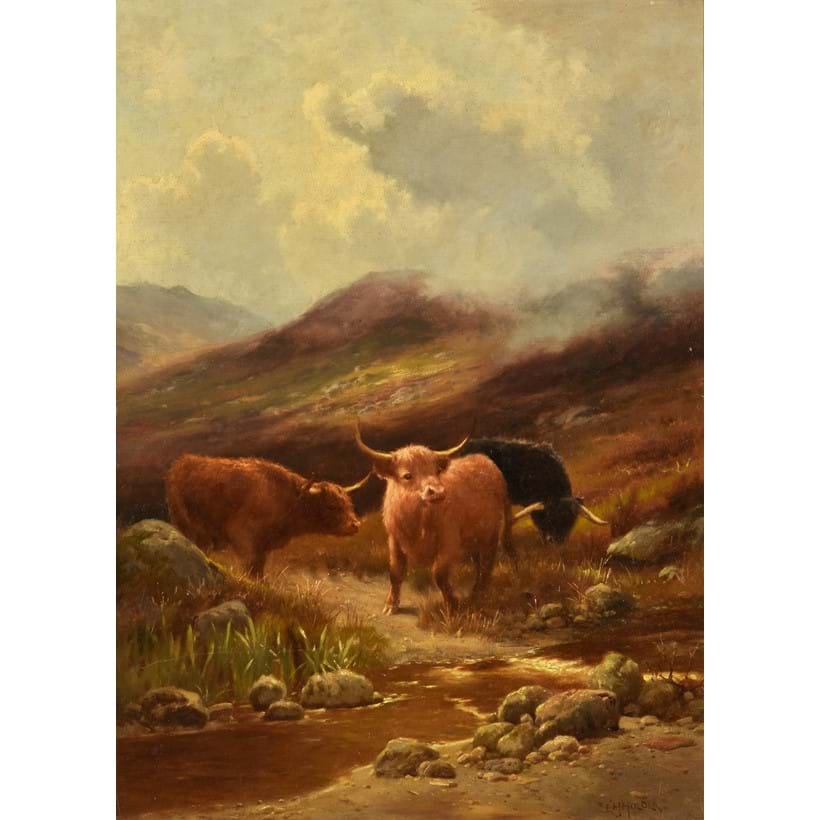 Visitors are encouraged to wear a face covering while in the building, use the hand sanitiser provided on entering and observe social distancing rules. We may need to restrict the numbers of visitors viewing at one time, so if you would prefer to book an appointment in advance, please contact us.  To book an appointment to view, please email: pictures@dreweatts.com or call +44 (0) 1635 553 553.