A group of sweetheart and military brooches will be offered in the first auction of 2019, Jewellery, Silver, Coins and Medals, taking place on 16 January at Donnington Priory.

During the course of the world wars servicemen departing home for precarious and unpredictable conditions would leave gifts with their loved ones, with a small brooch depicting the service crest or a soldier’s regimental badge particularly popular.

The name sweetheart can be misleading, suggesting that the jewel was only given to a serviceman’s sweetheart, however, the piece might be given to anyone whom the individual was leaving behind - parents, family and children.

Based on genuine cap badges

The brooches, aside from depicting the connection between the armed services and an individual, were small and fitted with pins in order that they could be worn on a blouse or lapel. The various styles originated from the cap badges of a regiment or corps, with some following these closely or taking on their own designs.

As sweetheart brooches became increasingly popular jewellers noted the trend and started producing them on a commercial scale. These brooches were smaller than the original service badges and made from finer metals such as gold or silver rather than coloured base metals; some were embellished with precious stones, such as diamonds, rubies and emeralds.

The auction features three RAF sweetheart brooches. The actual heraldic emblem used to represent the RAF is an eagle superimposed on a circlet surmounted by a crown. These jewels approximate the emblem’s overall design, however the eagle’s wings are the major component, with the crown and the initials RAF embellished with precious stones. 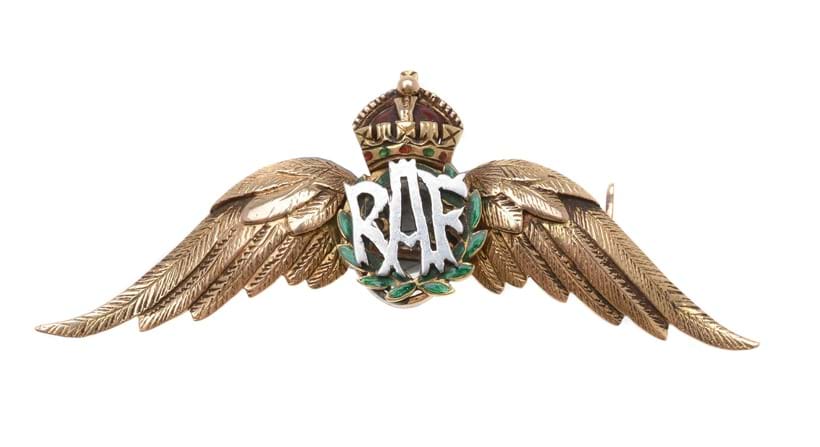 The Royal Regiment of Artillery

This brooch more closely matches the emblem of the Royal Regiment of Artillery, (or the Royal Artillery), with its muzzle-loading gun surmounted by a crown and scroll bearing the motto ‘ubique’ or everywhere, reflecting the fact that wherever the Army has served the Artillery has been part of that force. The blue enamelled banner below bears the motto ‘Quo Fas Et Gloria Ducunt’, Wherever Right and Glory Lead. 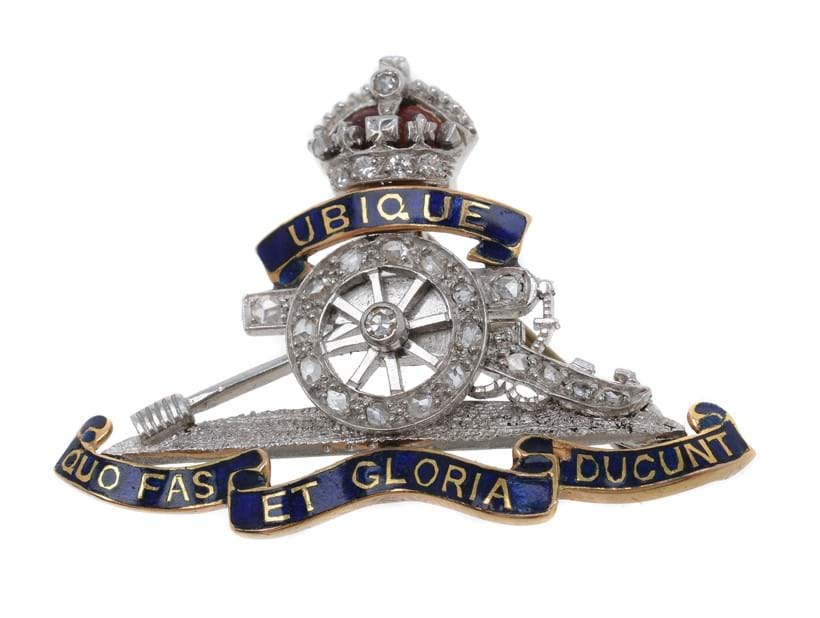 The naval crown can be dated to the Roman era, when a gold crown surmounted with small replicas of the prows of ships was awarded to the first man to board an enemy boat during combat. In heraldry a naval crown is mounted atop the shields of coats of arms of naval vessels and other units belonging to some navies.

More recent examples of naval crowns tend to comprise diamonds set in either gold, white gold or platinum, although other precious stones may feature in the crown element of the brooch. 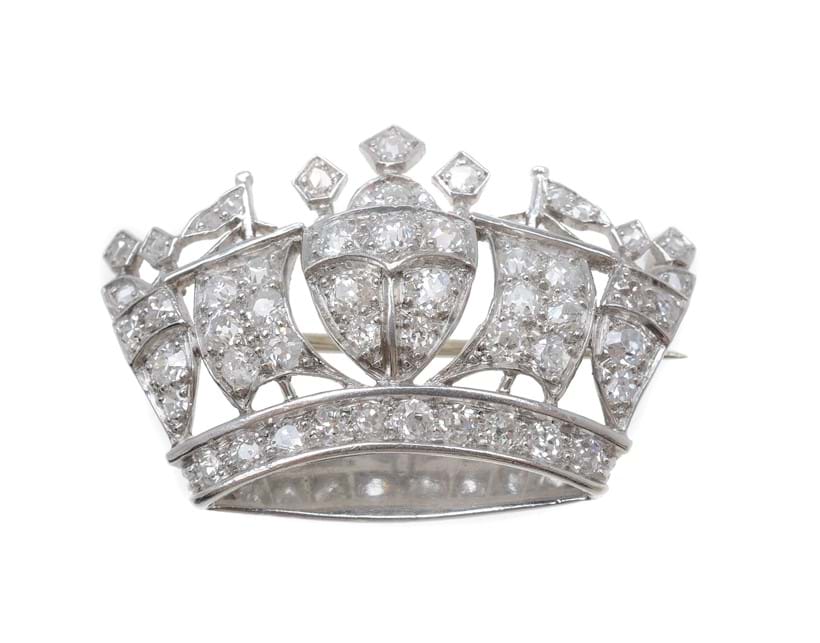 This brooch also closely matches the design of the cap badge of the Royal Tank Regiment – the oldest tank regiment in the world and established in 1916 soon after the invention of the tank. Tanks were first used in the Battle of Flers-Courcelette, September 1916, during the Battle of the Somme in World War I.

The brooch here is dated 1955 and the use of the crown of a Queen in the brooch also confirms that it was made during the reign of the present Queen. 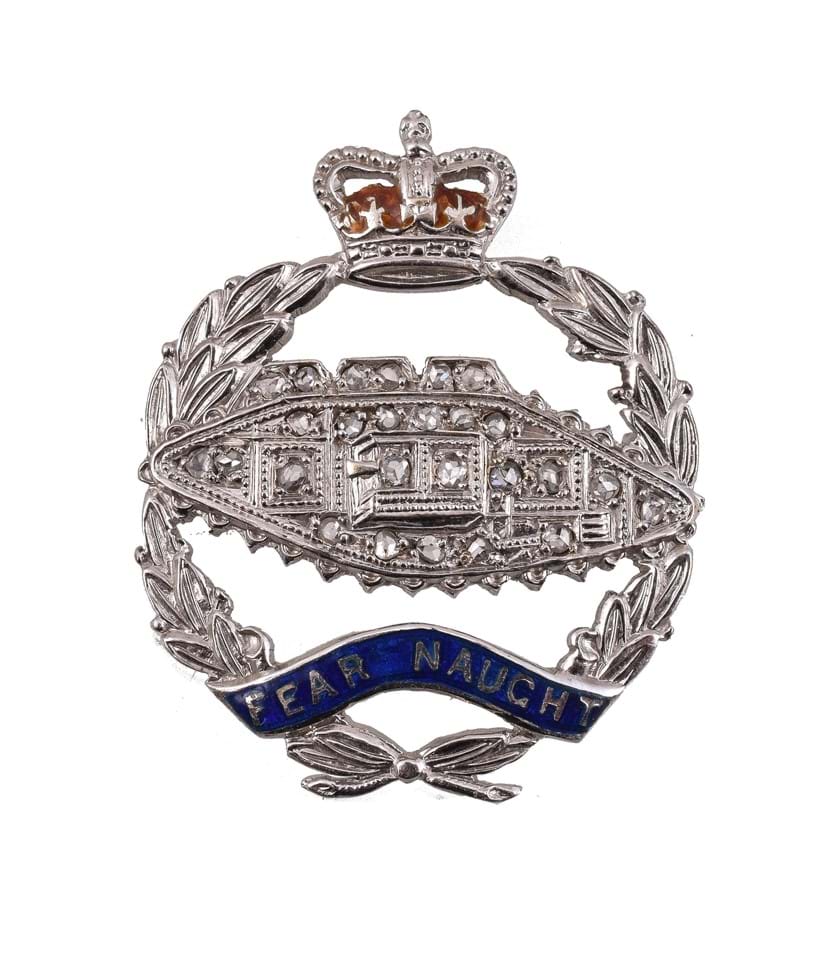 The Royal Military College of Canada

The emblem of the Royal Military College of Canada is depicted here. The College is a degree-granting university training military officers and was founded in 1876.

The pavé set diamond gauntlet holds three green enamelled maple leaves with a diamond accented coronet, to a ruby and diamond set band above a banner engraved with 'Truth Duty Valour', the motto of the college. 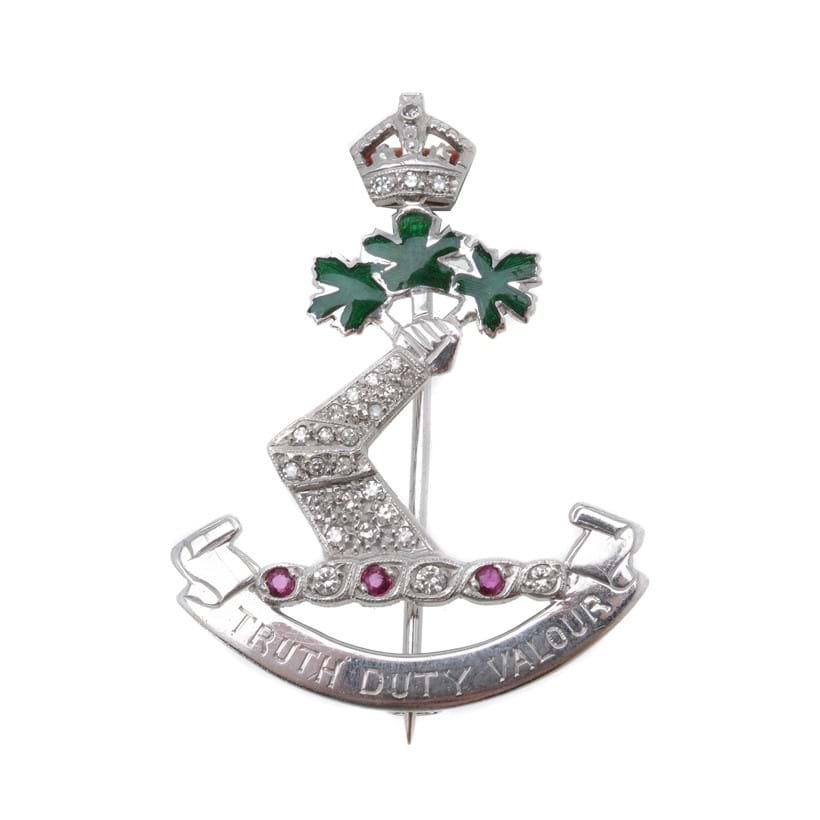 For further information on these highlights and to request a valuation for your jewellery, silver, watches, coins, medals and objects of vertu, contact us: jsw@dreweatts.com| +44 (0)1635 553 553.