If threads could talk, this elegant Danish needlework upholstered settee, circa 1740, which is consigned to Dreweatts’ Fine Furniture, Ceramics and Works of Art sale in September, might share the rollercoaster life story of the embroiderer who worked on its exquisite seat.

By family repute, this 18th century chair back settee is said to have been embroidered by the hand of former Queen Anne Sophie of Denmark & Norway. 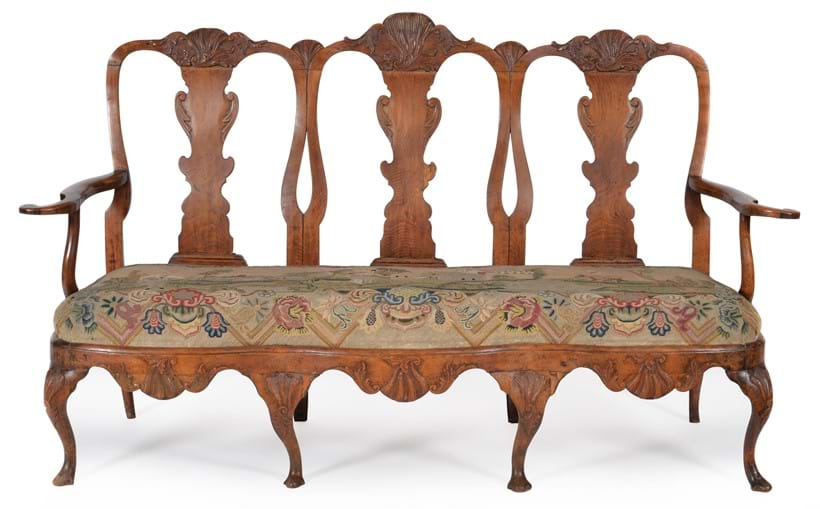 The youngest daughter of Duke Conrad Reventlow and described as ‘lively’ with ‘black fiery eyes’, Anne Sophie was only 18 years old when she met King Frederick IV at a masked ball in 1711, with their first encounter as if from a fairy tale. The young countess is said to have fallen hopelessly in love, and the King so taken by her beauty that he wanted immediately to have her as... his mistress, being already married to Queen Louise of Mecklenburg.

Unsurprisingly, Anne Sophie’s parents refused to indulge his wishes or their affair. So, with the help of her sister and several royal servants the King arranged for Anne Sophie to be smuggled out of her bedroom window and taken to Skanderborg Castle, where it is said that they were married morganatically or “to the left hand” the very same evening.

Even though Anne Sophie held no royal rights or privileges, for 10 years they lived as King and mistress until Queen Louise‘s death in 1721, upon which they wasted no time in marrying “to the right hand”, officially heralding Anne Sophie the new Queen of Denmark and Norway and their true love sanctified. 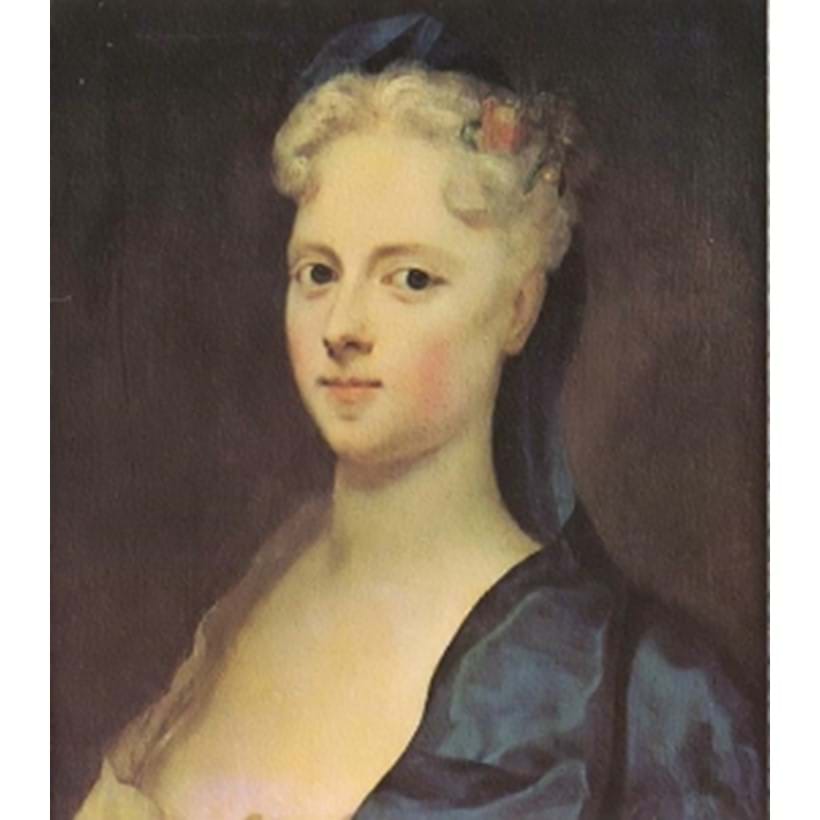 However, despite Anne Sophie’s considerable charitable work earning her the title Protector of the Poor, the fairy tale had already begun its nosedive towards a far more tragic end.

Prior to becoming Queen, Anne Sophie and Frederick had three children all of whom died in infancy. They went on to have three more, only to lose them at very young ages too.

With such unimaginable loss being considered by clergy and the nobility as divine punishment for years of sinful bigamy, Anne Sophie soon became the target of even greater resentment and retribution when Frederick died in 1730.

Having detested his stepmother intensely for years, the new King Christian VI banished her to her birthplace at Clausholm Castle, placing her under house arrest until her death in 1743 aged 49.

If family repute is correct regarding a connection to the Queen, one can only imagine the sentiment and emotion sewn into every stitch on the seat of this exquisite settee. 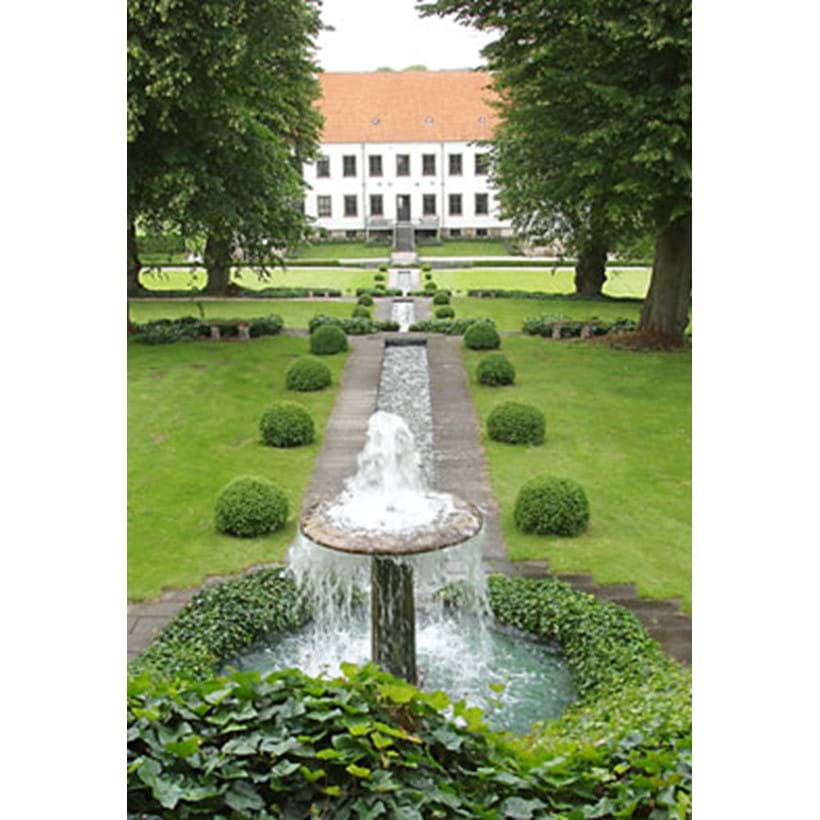 The Finer Detail: scenes from an 18th century Scandinavian village

Carved in Denmark from beech wood circa 1740, the padded and tapestry upholstered seat is decorated with charming scenes of village life, framed within a floral border and a shell and foliate carved apron, with cabriole legs, measuring 108cm high, 190cm wide, and 57cm deep. Scenes from an 18th Century Scandinavian Village, said to be the embroidery work of Queen Anne Sophie of Denmark & Norway.

Provenance: From a Danish Queen's Castle to an English Knight's Manor?

From a collection at Waystrode Manor in Kent, and inherited by family descent, the settee was previously purchased from Otto Berg, Copenhagen, with the following provenance from the confirmed account of Otto Berg: Purchased from a Private Collection, Denmark (The collection of Hjalmar Bruhn). By firm repute to Clausholm Castle near Randers, Denmark, the ancestral home of Anne Sophie von Reventlow.

Our specialists expect this exceptional piece of Danish craftsmanship steeped in history to achieve between £15,000- £20,000 at Dreweatts on 11th September. 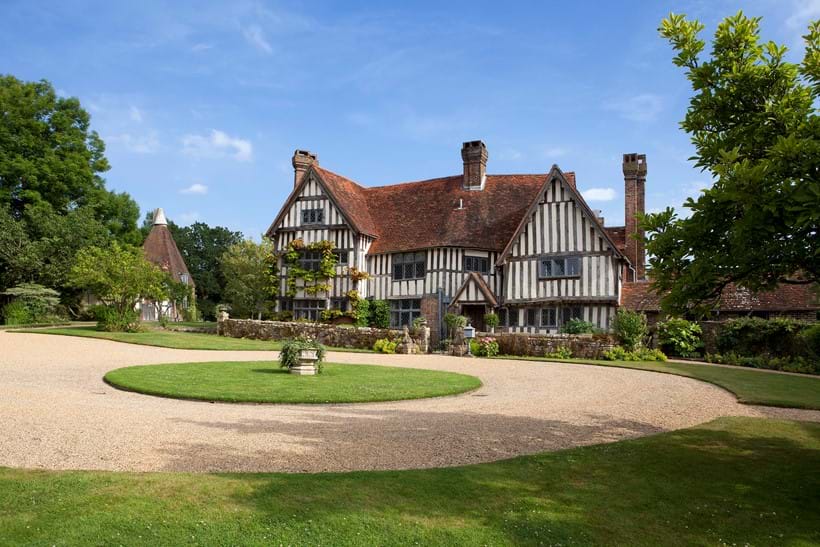 Waystrode Manor in Kent. The final destination for the 18th century embroidered settee before being consigned to Dreweatts' Fine Furniture Sale.