This March we have our Space Exploration Photography and Ephemera auction. Dreweatts are proud to offer a stunning collection of over 600 photographs charting the history of mankind's endeavours into space - from the dawn of the space age to the last men on the moon. Included in the sale are many key milestones - historic moments captured on film, such as the first humans in space, first spacewalks, first moon landing – and lasts, including the very last departure from the moon.

The sale charts the remarkable journey from space exploration being a far-fetched concept to a breath-taking reality. “Per aspera ad astra” - you will see behind the curtain and bear witness to the incredible collective efforts of thousands of people that put propelled man on a voyage to the moon. Ahead of the auction Dreweatts Autographs and Ephemera specialist, Ania Hanrahan looks at some of the highlights.

'On a personal level, I have seen the awe and wonderment in my 6-year-old daughter's eyes as she saw a photograph of the earth rising above the moon's horizon and can only imagine the sheer exhilaration of capturing such an image live. As we battle uncertain times, the indelible human spirit that embodied the space program is a joy to behold and continues to inspire us to shoot for the stars.'

With the mission of photographing the Moon’s surface, Lunar Orbiter 1 was the first U.S. robotic spacecraft to orbit the Moon. The 200 photos sent by each of the five Lunar Orbiters helped NASA select safe landing sites for the Apollo missions.

Here we have Lot 90, the famous 'Earthrise' photograph. Taken on the 23rd August 1966, this is the world's first view of Earthrise by Lunar Orbiter. 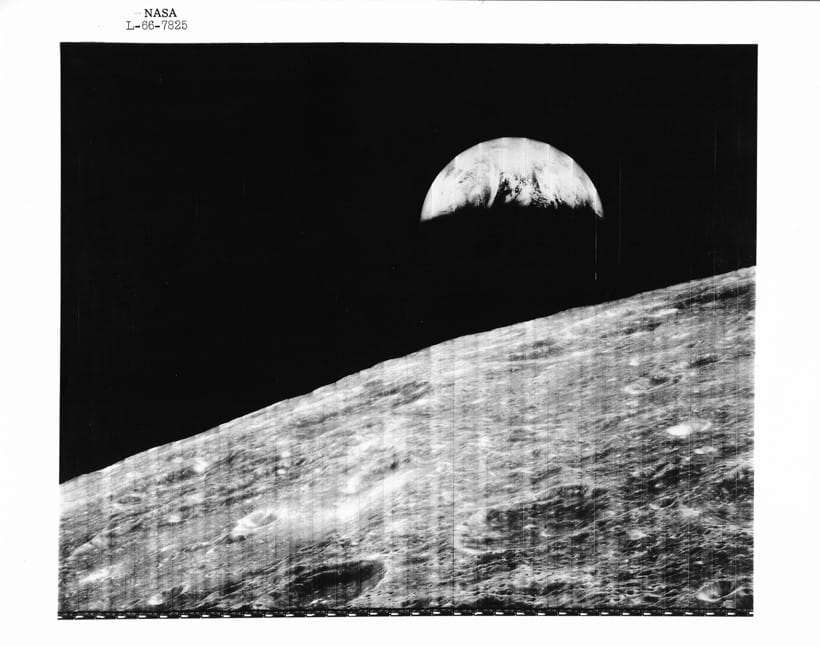 A highlight from the auction is Lot 31, this vintage chromogenic print of Ed White as he performs the first American spacewalk, shown here over Hawaii. It was taken during the Gemini 4 mission on 3 June 1965. 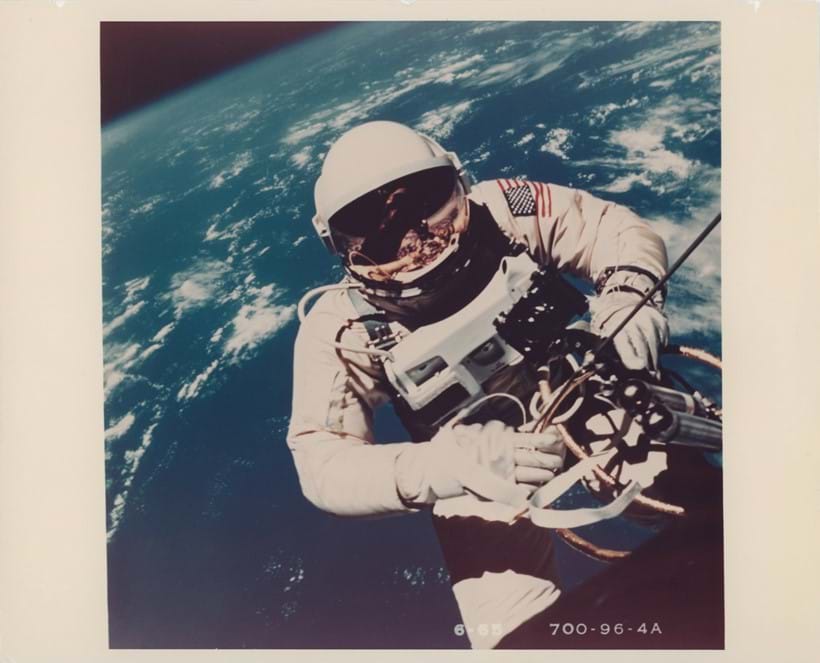 A multiple milestone in space photography, this photograph is both the first still photograph of a human in space and the first taken by another human (until this point all released images of astronauts were taken by television or monitoring cameras).

From the Apollo 8 mission we have the first photograph of the Earth taken by a human from beyond the Earth's orbit (Lot 121). It was taken by William Anders on 21 December 1968 at 13:06 GMT and shows Earth's disc as seen by the Apollo 7 crew during the trans-lunar coast at a distance of about 27,000 miles. 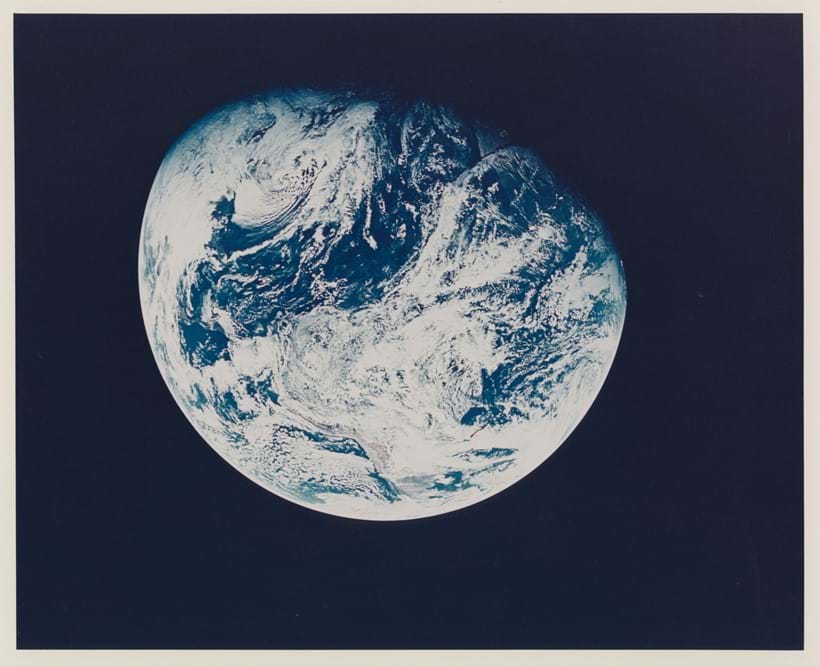 “We came all this way to explore the moon, and the most important thing is that we discovered the Earth” ~ William Anders

During the Apollo 8 mission, for the first time ever, the Earth appeared to the astronauts as a disc – a planet seen from deep space.

Featured on the cover of Life Magazine on January 10, 1969, this image would become one the 20th century's most famous photographs, inspiring people worldwide to consider Earth's place in the cosmos.

We also have Lot 122, this vintage photograph, Apollo 8 'Earthrise'. Here the Earth can be seen rising above the lunar horizon. It was captured by William Anders on the morning of 24 December 1968.

The most celebrated view of planet Earth, this is the first colour photograph of Earthrise taken by humans. This first Earthrise ever seen by humans was observed by the crew of Apollo 8 during the fourth orbit of the Moon. 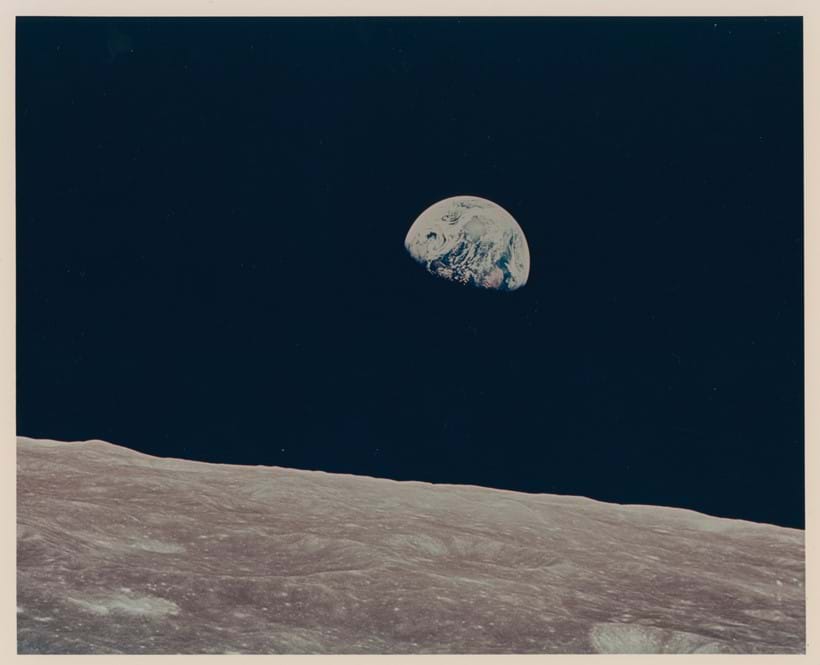 Lot 132 is a stunning vintage print of a near-full moon, the first human-taken image from a previously inaccessible perspective. This view was witnessed by the Apollo 8 crew during their homebound journey after the trans-earth injection.

The homeward journey provided the crew with an opportunity to see the Moon in its full breath-taking glory and photograph it to capture sights never visible to terrestrial viewers. The right side of the photograph features landmarks never visible to humans from the Earth, while those which can be observed from the Earth - the Sea of Tranquillity, Fertility, Crises and Nectar, as well as Theophilus crater - are clearly delineated in this photograph. 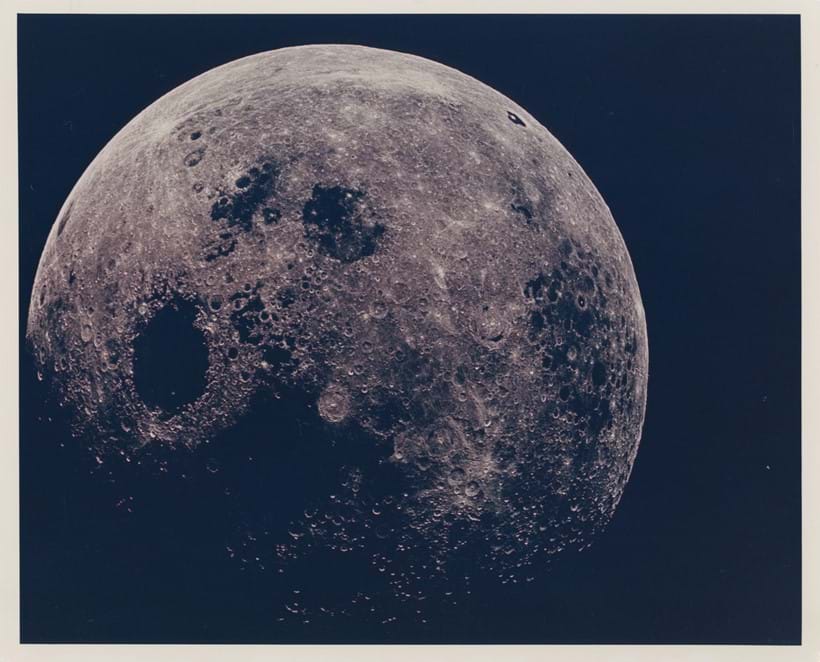 From the Apollo 11 mission we have this wonderful image showing the Earth rising above the Moon's horizon as the Lunar Module ascends towards the Command Module (Lot 225).

It was taken by Michael Collins between 11-24 July 1969. When talking about this moment, Michael Collins said, 'Bigger and bigger the LM gets in my window, until finally it nearly fills it completely... Neil is flying information with me... "I got the Earth coming up... it's fantastic!" I shout at Neil and Buzz, and grab for my camera, to get all three actors (Earth, Moon and Eagle) in the same picture.' 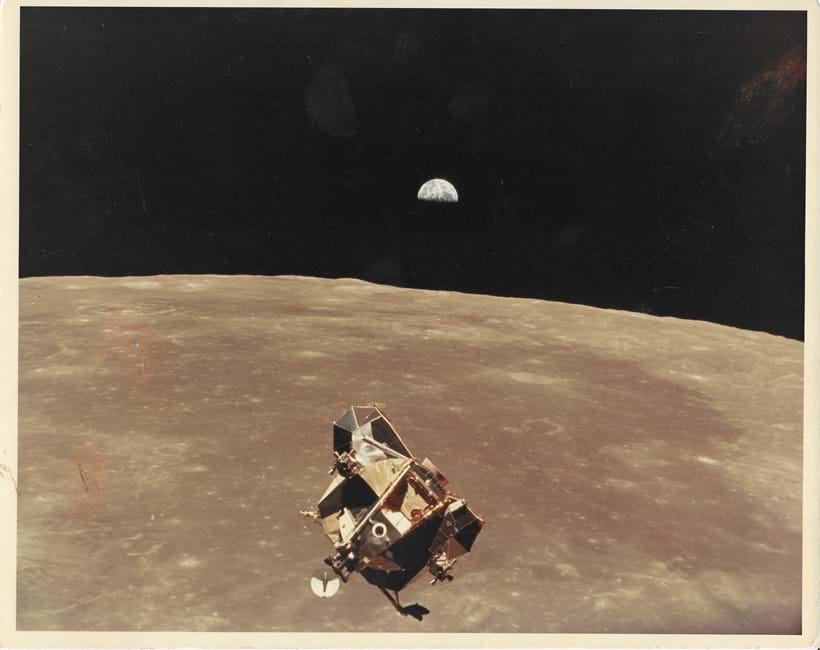 Another exciting item is Lot 197, this vintage print of Buzz Aldrin taken by Neil Armstrong, reflecting the photographer and Lunar Module 'Eagle' in Aldrin's gold-plated visor. This is the most iconic image from the Apollo 11 mission. 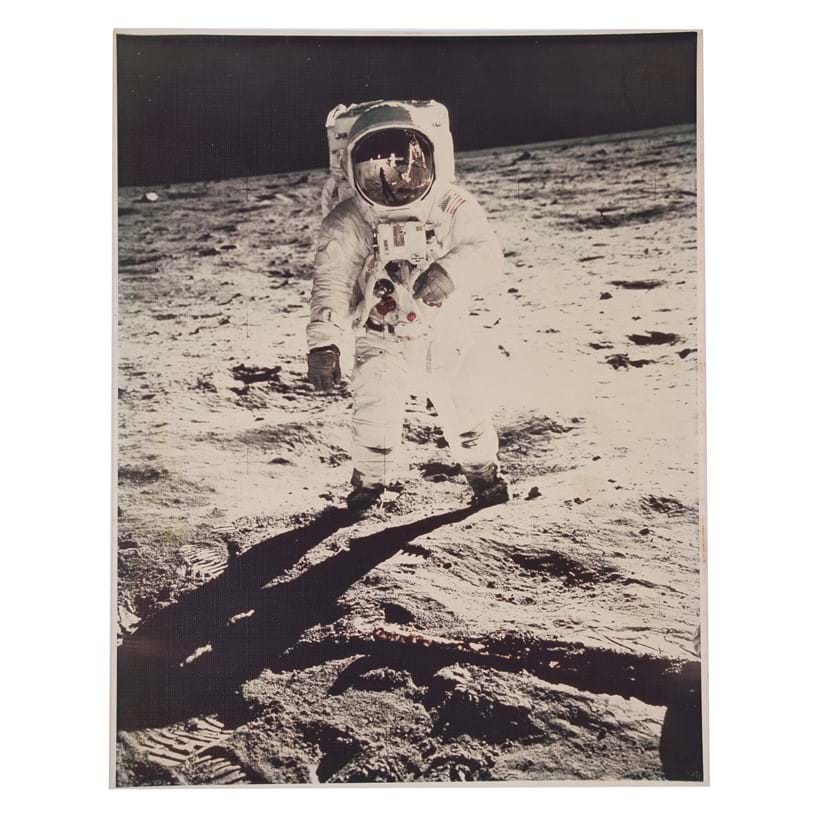 When this photograph was taken, Buzz appeared in the centre of the photograph with his OPS antenna at the top edge of the field-of-view. When the image was prepared for release for publication soon after the mission, it was cropped at the bottom and sides, and a black area was added at the top (editing out most of the OPS antenna) to give the released version visual balance and presentable composition for publication.

Apollo 17 | Last lift off to the Moon

Taken on 7 December 1972, here we have a dramatic image of the last lift off to the Moon (Lot 337). It shows the Apollo 17/Saturn V launch from Pad A, Complex 39 at the Kennedy Space Centre. Apollo 17 was the only night-time lift off of the Saturn V vehicle - it departed at 12.33 am EST. 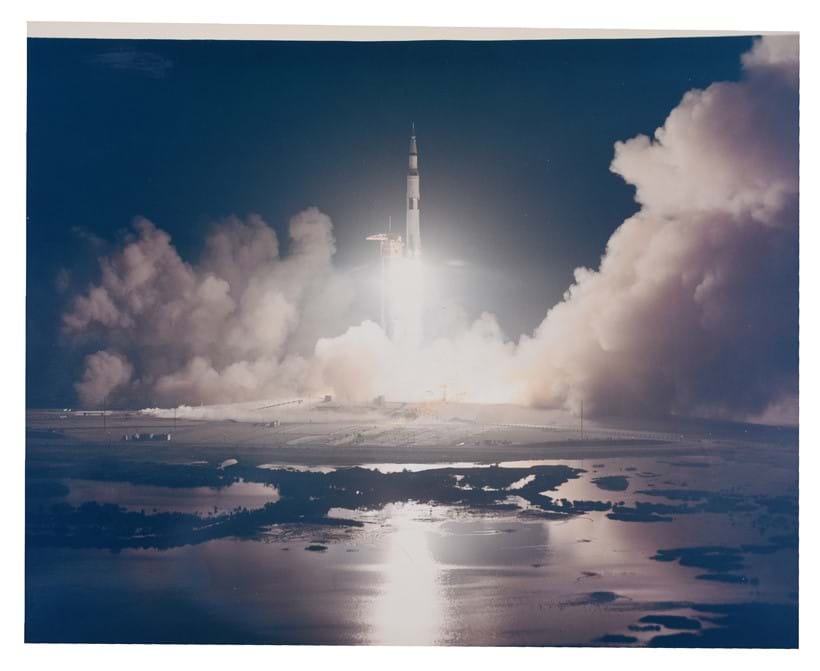 In the auction we also have Lot 363, the striking 'Blue Marble' photograph. This is one of the most celebrated images of the Earth - the entire globe is seen fully illuminated by the Sun. It was taken by Harrison Schmitt during the Apollo 17 mission on 7 December 1972. 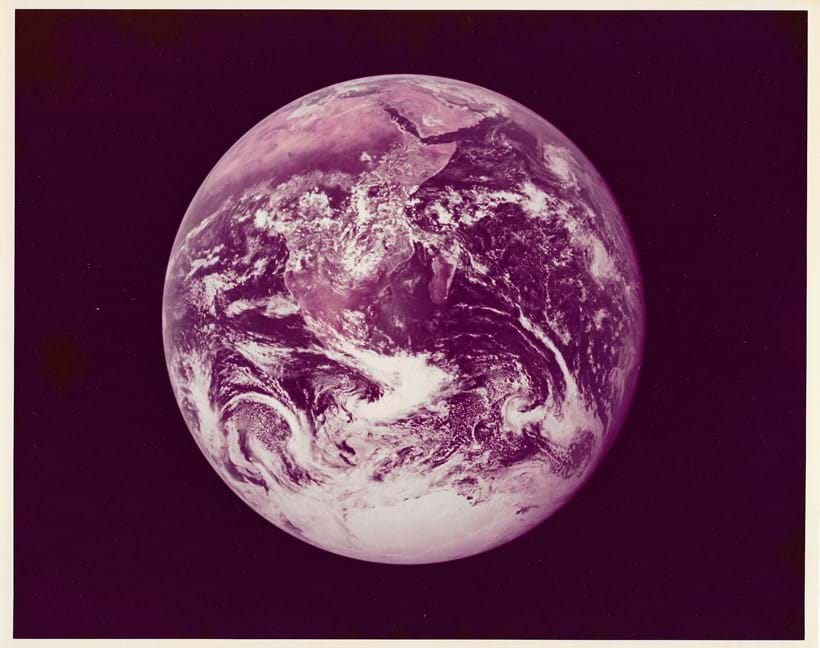 Taken 5 hours and 6 minutes after the lift-off, from 29,000 km (18,000 miles) from the planet's surface, this photograph shows mostly southern hemisphere from the Mediterranean to Antarctica. Africa (in the early hours of daylight), Madagascar, and Arabian Peninsula can be clearly delineated, while an approaching December solstice illuminates Antarctica.

Apollo 17 | Eugene Cernane by the US flag

Also from the Apollo 17 mission we have this image taken by Harrison Schmitt on 13 December 1972 showing Mission Commander and the last person to walk on the Moon, Eugene Cernan (Lot 356). Here he salutes while standing by the US flag at the Taurus-Littrow landing site, with the Lunar Module and Lunar Rover are both visible in the background. 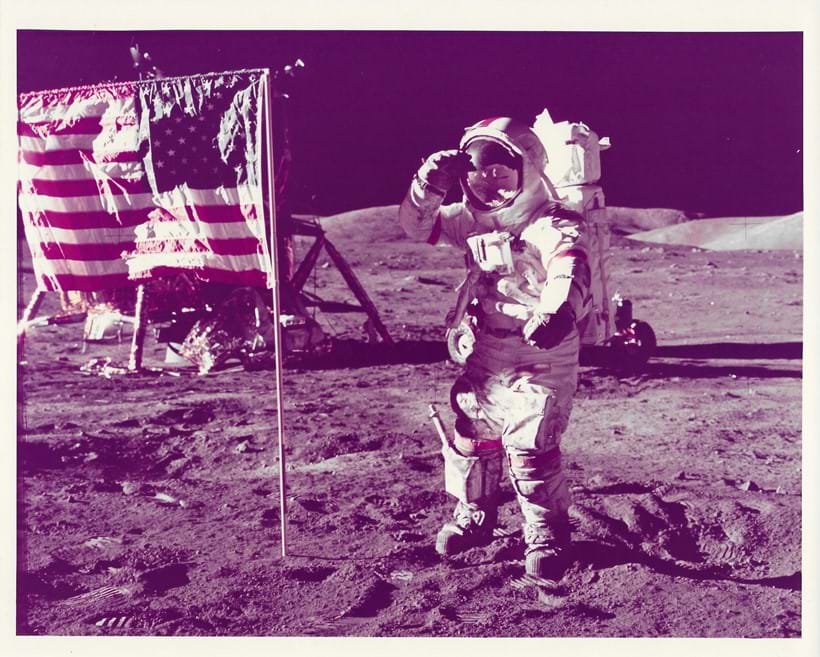 Apollo 17 | The last departure of humans from the Moon

The final highlight that we are going to look at here is Lot 357, this vintage gelatine silver print showing the last departure of humans from the Moon on 14 December 1972 at 22:54:37 GMT. The photograph was taken by a colour television camera mounted onto the Lunar Rover, controlled remotely by the Mission Control at Houston.

You can see the Lunar Module "Challenger" as it lifts off from the surface of the Moon at 185h 21m and 37s into the mission. A spray of debris is clearly visible in the photograph. 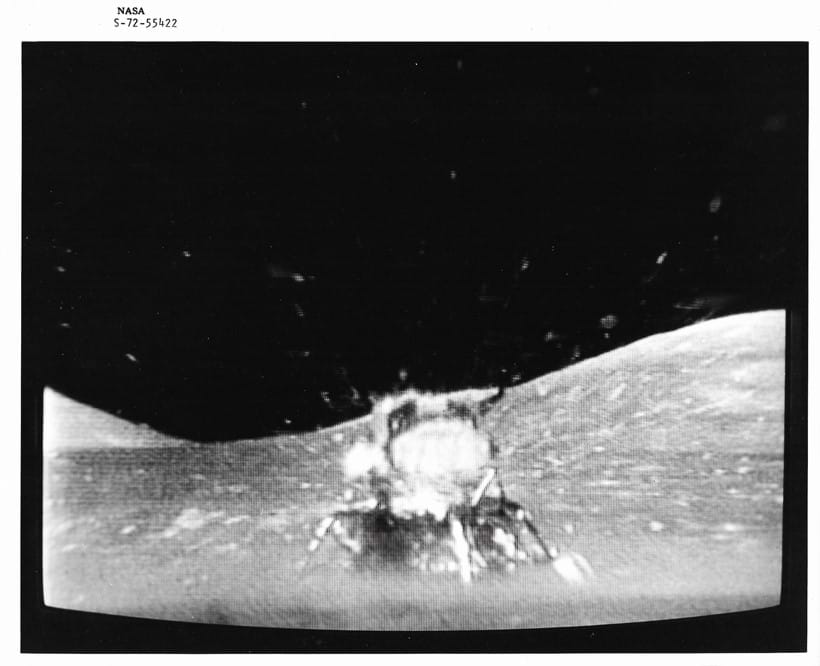