With silver epergnes and table centrepieces becoming hotly desired for the formal dining table trends, Dreweatts silver consultant Ian Pickford delves into the history of the epergne. Dreweatts are offering four epergnes, amongst other table centrepieces, in our Fine Jewellery, Silver, Watches and Luxury Accessories auction on 7 July.

The Epergne or Surtout

Only the very well-to-do could afford to purchase one of these magnificent pieces which still form a wonderful centre piece for any substantial table.

With their origins in France in the early 18th century, they were referred to as a ‘Surtout’ (Above Everything). In their most elaborate form that is what they were all about - incorporating, as they did, anything from small saucers to tureens, and sauce boats to salts.

The most standard part of the Surtout/Epergne was a frame holding a tureen which supported a dish or, later on, a basket. Small saucers were also held on detachable branches slotting into the frame. The saucers would then either screw onto the branch or slot onto a ring fitting. Some would have additional branches to hold candle nozzles, or were supplied with a set of nozzles that could replace the saucers. If all, or only some, of the branches were not in use, then, buttons were supplied to conceal the resultant gap so that the epergne could always be assembled to look complete. 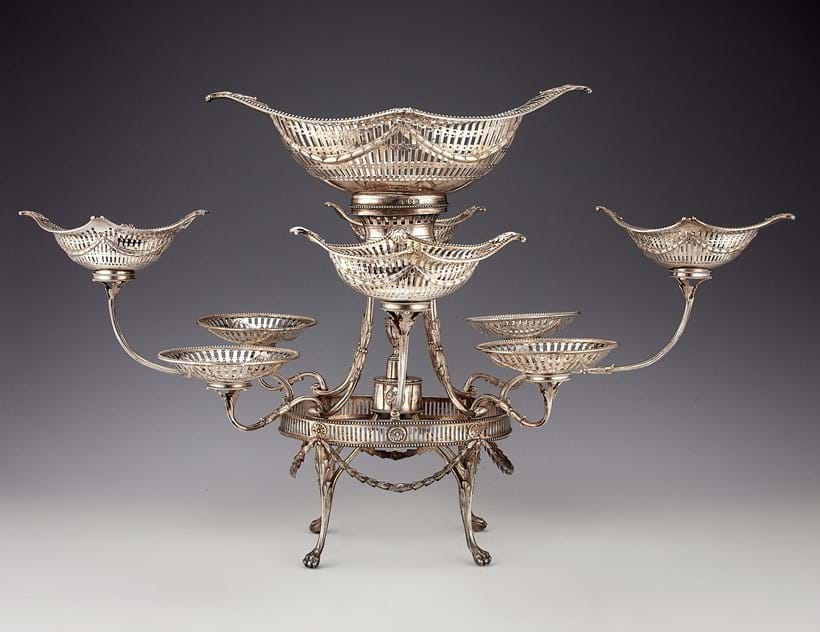 In its most elaborate form an epergne was capable of serving just about anything you desired from soup to stews or from fruit to sweetmeats. The records interestingly show that pieces were, on occasions added. In the Wakelin Ledgers for example two clients are recorded as having their Epergnes refurbished and, at the same time each had four branches added.

Other accessories that may be found with epergnes include: - sets of casters; salts cellars; double salt cellars; spice boxes; cruet frames; sauce boats and oil lamps. These accessories added to the beauty of the epergne and its flexibility. It could be broken down to its constituent pieces and then spread along the table for a dinner, or be used in its complete form in the centre of a smaller table for an informal supper, where the servants could be dismissed so that the diners could be more relaxed.

Frequent use of epergnes meant they were repaired fairly often. A probable reason for the screw fittings being repaired so frequently was overtightening on assembly by the servants who no doubt would have been instructed to make certain that it was ‘nice and tight’. Indeed the Mildmay Accounts show that within the first couple of years year of being supplied an epergne, one of the saucers was returned to Paul De Lamerie's workshops in 1729 for “mending the screw of a branch saucer” at a cost of two shillings (10p). Similar repairs had to be carried out again in 1730 and 1736 by the De Lamerie workshops.

Epergnes commanded very high prices from the silversmith who made them. When the Earl of Exeter commissioned one in 1755 from Wickes & Netherton, workmanship alone was priced at 14 shillings & 1d per oz, an enormous charge at the time for one of the finest and important pieces of Rococo silver ever made. The total charge was some £338 which today would equal about £80,000. Not surprisingly the evidence points to most Epergnes being commissioned with only a comparatively small number sold ‘off the peg’. 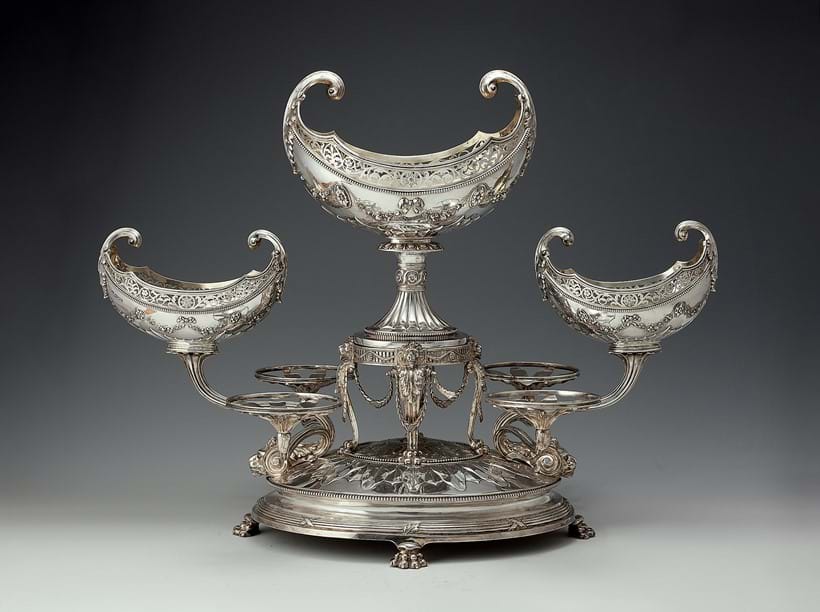 As the 18th century progressed the general trend for epergnes was to increase steadily in height, often with a second tier of saucers. By the mid-century the tureen has mostly been replaced with a large basket and, likewise, the small saucers were replaced with small baskets, or the saucers remained and a further tier as added with the branches holding sweetmeat baskets.

With Chinoiserie becoming the height of fashion in the mid 18th century, examples would include pagoda canopies edged with bells, such as those made by Thomas Pitt.

Some years ago one of my students produced a wonderful example which was still kept in its original box. The family apparently always used it at Christmas and it was the children’s job to assemble it!

By the end of the century Neo Classic examples were being made some of which were designed by the likes of William Chambers and also James Wyatt. During the Regency period, truly massive examples were being supplied by Rundell, Bridge & Rundell. Many of these were made by Paul Storr, who was a partner in the firm. These usually sit on a triangular base supporting a ‘column’/stem at the top of which will be a cut glass bowl surrounded by candles as well as dishes or baskets held on brackets. Contemporary illustrations show these with the large glass bowls full of fruit. These massive examples were often made in a suite to be set along the centre of the table with comports (standing dishes), often in pairs or sometimes in sets of four. It would have been a brave soul who attempted to take a piece of fruit from one of these. You would literally have to climb onto the table to get anywhere near and even if you got that far you would then have to contend with the candles.

As the 19th century progressed cornet shaped flower holders start to be added. Eventually these flower holders took over completely and became essentially floral centrepieces, although they are still referred to as epergnes.

Not surprisingly in the 18th century most epergnes were made by the finest silversmiths of the time, such as Paul de Lamerie, George Wickes, Wakelin, David Willaume, Ann Tanqueray and Thomas Hemming. The massive Kirkleatham Epergne of 1731 is fascinating for having some parts by David Willaume II, and others by his sister Anne Tanqueray.

There were also specialists who supplied parts to the larger silversmithing firms such as Wakelins. The most prolific of these was Thomas Pitts, and his son William,  who is well known for his pierced work. He also supplied spare parts such as branches and glass dishes. Another supplier was Emick Romer who came to England from Oslo in Norway. His most prolific period for making Epergnes in England was from 1765 to 1775. 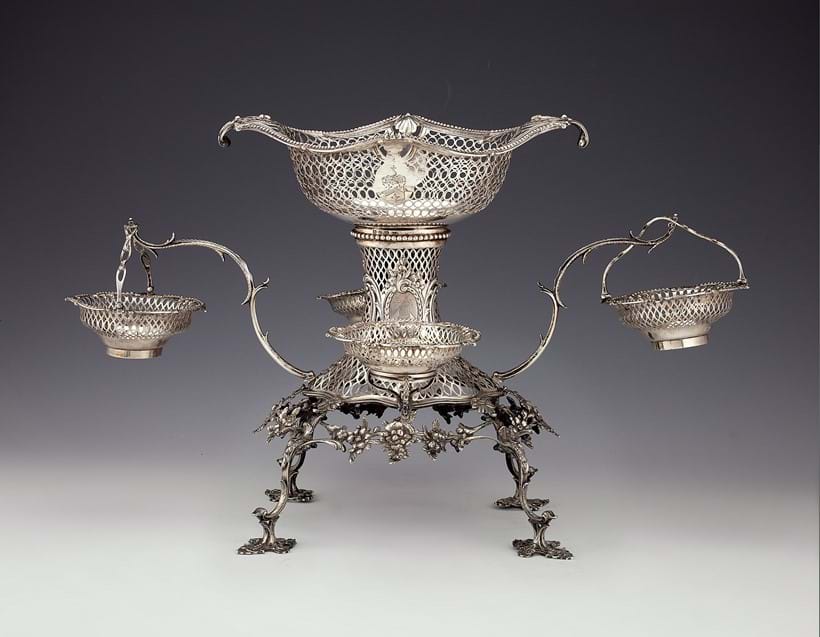 In the late 18th century an Irish form developed. The most distinct feature of these is that they sit on a canted oblong gallery tray which has the main frame bolted to it. Scottish examples also exist from the 18th century, but are very rare, and follow similar design conventions to those made in England. In 1820 in Chester there is a record of the City commissioning at a cost of £1,000 an Epergne and Candelabra for Sir John Grey Egerton, although its whereabouts today is unknown.Other privincial examples are also recorded from Newcastle.

As would be expected the main frame should be fully marked along with the largest pieces such as tureens, large dishes and large baskets. With the smaller pieces such as branches, small saucers/dishes, small baskets and candle holders, one will only find only partial marks. With many Epergnes having been split up, often at family division, it is quite usual to find a surviving individual swing handle sweetmeat baskets with only a maker’s mark and a Lion Passant. With many Epergnes having been split up, often at family division, it is quite usual to find a swing handle sweetmeat basket with only a maker’s mark and a Lion Passant. At the same time one could also find a similar or identical fully hallmarked example by the same maker which was made and sold as an individual piece.

Viewing in person is by appointment and in accordance with Covid-19 regulations. To book an appointment to view, please email jsw@dreweatts.com or call +44 (0) 1635 553 553