The Art Online auction (a timed online auction ending on Friday 2 December) showcases works from the 18th century through to the contemporary. We are delighted to present a collection of works depicting some of the world’s most famous mountain ranges and peaks, from Aletsch Glacier in the Alps to the Western Karakoram in Kashmir (Lots 1-10). Here Picture Specialist, Francesca Whitham, takes a look at the works. 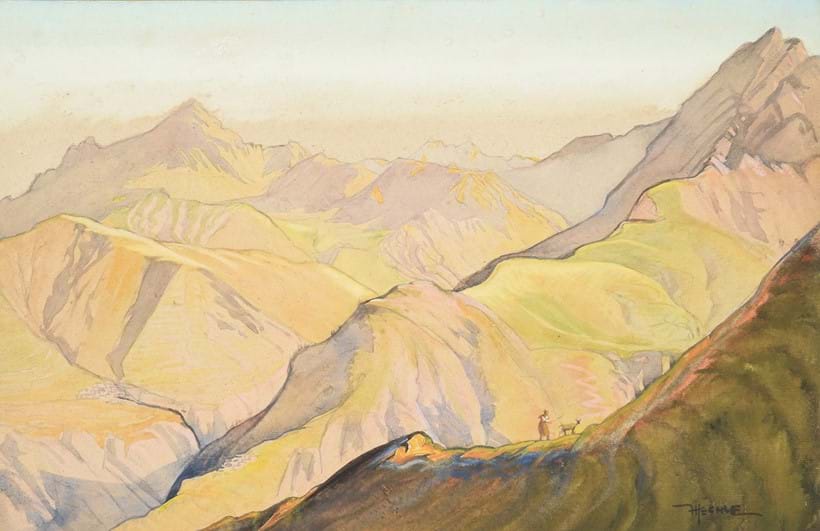 We are first setting off to Switzerland to view the Slopes Above Arolla captured by British artist Hilda Hechle. Hechle is best known for her mountain landscapes and book illustrations. She studied at St. John's Wood Art School before attending the Royal Academy Schools in London.  Hechle was a member of the Ladies' Alpine Club where she exhibited her mountain landscapes at the Alpine Club Gallery's annual Picture Exhibition.

'Gifted with imagination and a good sense of design, she broke away from the usual rather sentimental treatment of mountains in favour of a simplified statement with the rhythms of structure strongly accentuated so that the effect of great scale was preserved even in a small picture'.

Hechle was born at Brassington Hall, the home of her uncle, in the Peak District of Derbyshire, an area famous for its climbing tradition. She became an experienced climber, having mastered several routes in the Alps, and was a stalwart of the Ladies Alpine Club, where she gave a lecture in 1928 in which she issued 'some valuable practical directions, i.e. that the best place from which to draw one mountain is from half way up another' (Ladies Alpine Club Yearbook, 1929, p 40). Hechle's fanciful work as an illustrator is populated by fairies and spirits, and there is an almost animist dimension to her paintings of mountains, that she painted on the spot at altitude. 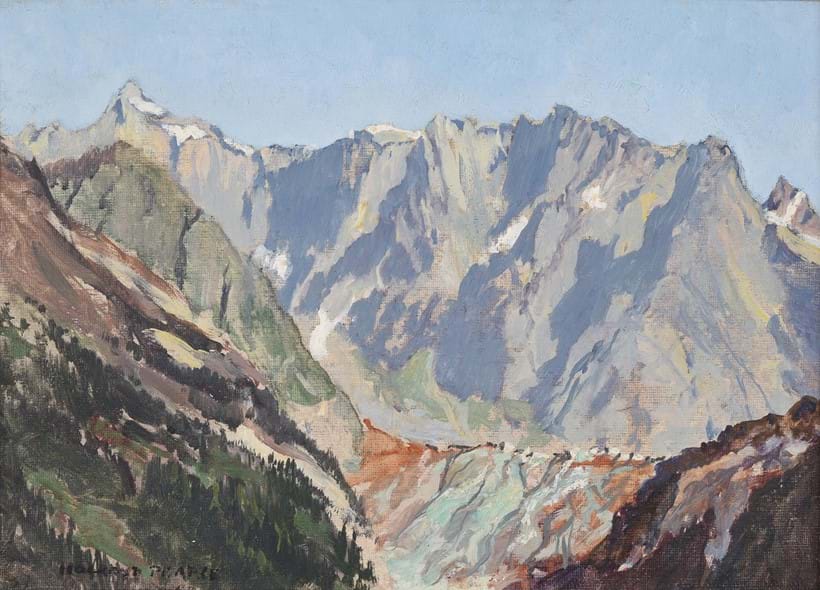 Not far from Arolla is the Aletsch Glacier depicted in beautiful shades of blue by Edward Holroyd Pearce. Pearce was a British judge who served as a Lord of Appeal in Ordinary from 1962. In 1971-72 he chaired the Pearce Commission which was charged with testing the acceptability of a proposed constitutional settlement in Rhodesia (now known as Zimbabwe). However, early on in his career during the 1930's, Pearce was forced to leave legal practice for a time because of his tuberculosis. He spent some of this time in Switzerland where he acquired a lifelong passion for oil painting, before returning to the Bar.

Pearce was a compulsive painter of the mountains. From his bed in the sanatorium, he could see the opaque green waters of the Rhine and an array of other peaks. To Pearce, their beauty was like a healing touch. His interest in the arts continued throughout his life and he regularly exhibited at the Royal Academy. 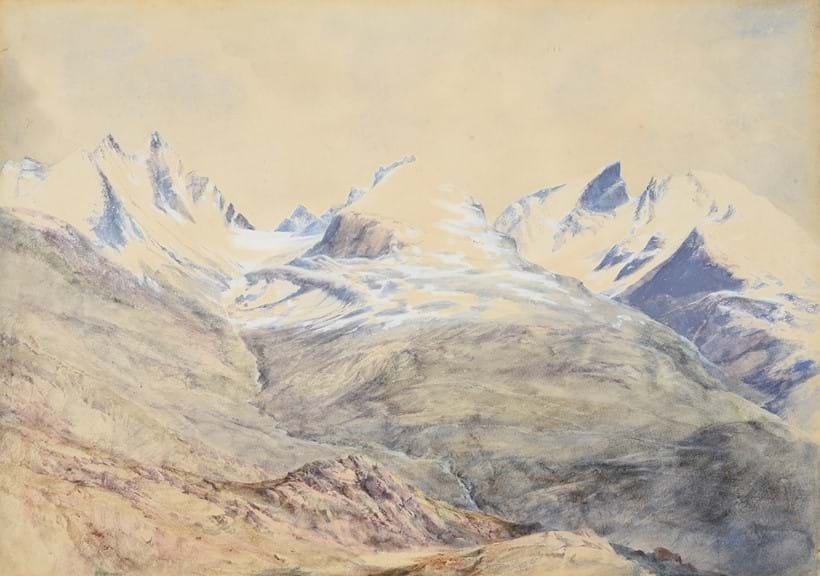 Travelling North we visit the mountainous landscape of Norway and its breathtaking fjords by William West (Lot 7) and George Macco (Lot 8). West was nicknamed "Norway West" and sometimes "Waterfall West".  West explored the mesmerising Scandinavian landscape throughout his life. Born in Dartford, Kent, West spent most of his life in Bristol and enjoyed adventuring and depicting the dramatic landscape across Devon and North Wales. West exhibited at the Royal Academy and the British Institution between 1823 and 1845. After this date he concentrated on Scandinavian, and more specifically Norwegian subject matter. 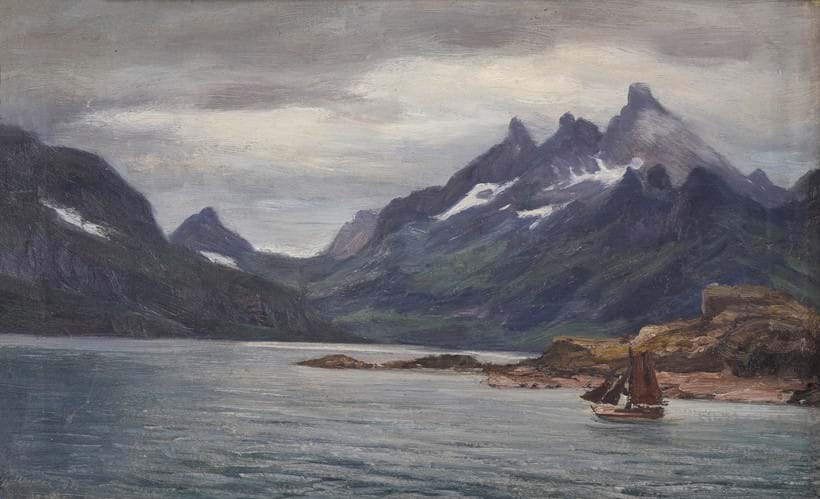 It has been suggested that Lot 8 depicts Raftsund, Troldfjord in Lofoten. Georg Macco was a German landscape painter and illustrator, associated with the Dusseldorfer Malerschule. He is primarily known for his Orientalist works. He first painted alpine and Nordic landscapes. Macco undertook numerous journeys to the Orient, where he found inspiration and motifs for his paintings that eventually made him one of the most sought after German Orient painters.

Our next lot takes us on a journey slightly further afield into the Karakoram mountain range in Kashmir spanning the borders of Pakistan, China and India, with the northwest extremity of the range extending to Afghanistan and Tajikistan. Most of this mountain range falls under law of Gilgit-Balitstan which is controlled by Pakistan. Its highest peak is K2. It is the second highest mountain range in the world with eighteen summits over 7,500m. It is the most heavily glaciated part of the world outside the polar regions. It is famous for being one of the most geologically active areas at the boundary between two colliding continents. Lot 5 shows the misty cloud coverage with an eagle sweeping towards the viewer as a native onlooker sits aside the mountain with his goats and distant ruins beyond. 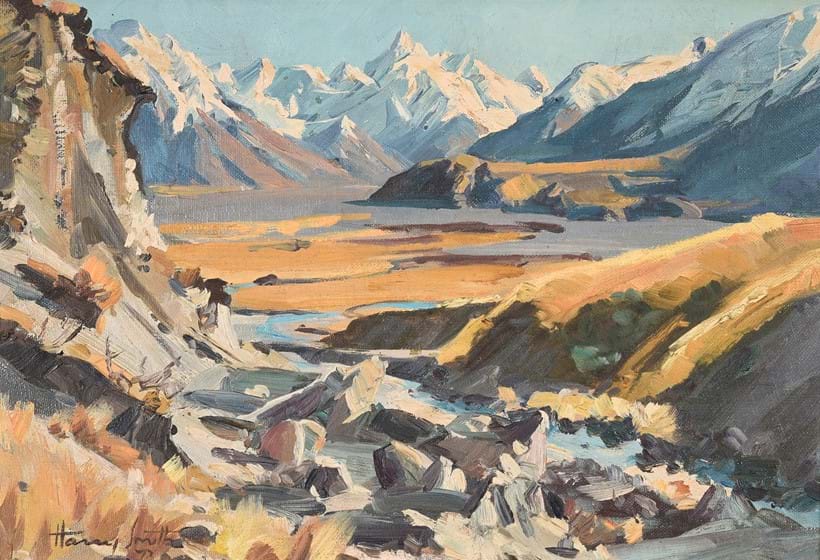 A true mountain expedition isn’t complete without a visit to New Zealand. Lot 6 depicts Harry Smith’s idyllic view of the Upper Rangitata. The warm colour palette creates the light bouncing off the vast rocky landscape and draws the viewer in.

This is a Timed Online Auction running from 17 November - 2 December 2022.

VIEWING:
Viewing is available by appointment from 17 November.

Remote Viewing is available by appointment from 17 November. Our Remote Viewing Service allows you to view specified lots via your smartphone from the comfort of your own home at a time convenient to you. Find out more here.