The auction featured a wide range of pieces: netsuke, lacquerware, cloisonné enamels, fans, satsuma and woodblock prints, as well as a fine collection of Meiji bronzes.

We would be delighted to hear from you if you are interested in either buying or consigning in future auctions, contact us at: asian@dreweatts.com | +44 (0)1635 553 553

From the collection of Meiji bronzes, this pair of vases features pigeons amid the branches of a flowering cherry tree on a toned pale blue background. By contrast the necks are densely decorated with stylised floral motifs.

Namikawa Sosuke was one of the most important and influential artist-craftsmen of the Meiji period and from 1896 he was styled Imperial Craftsman to the Emperor Meiji. He actively participated in national and international expositions, winning prizes in Amsterdam, 1883, Nuremberg, 1885 and Paris, 1889. Examples of his work are to be found in museums around the world. 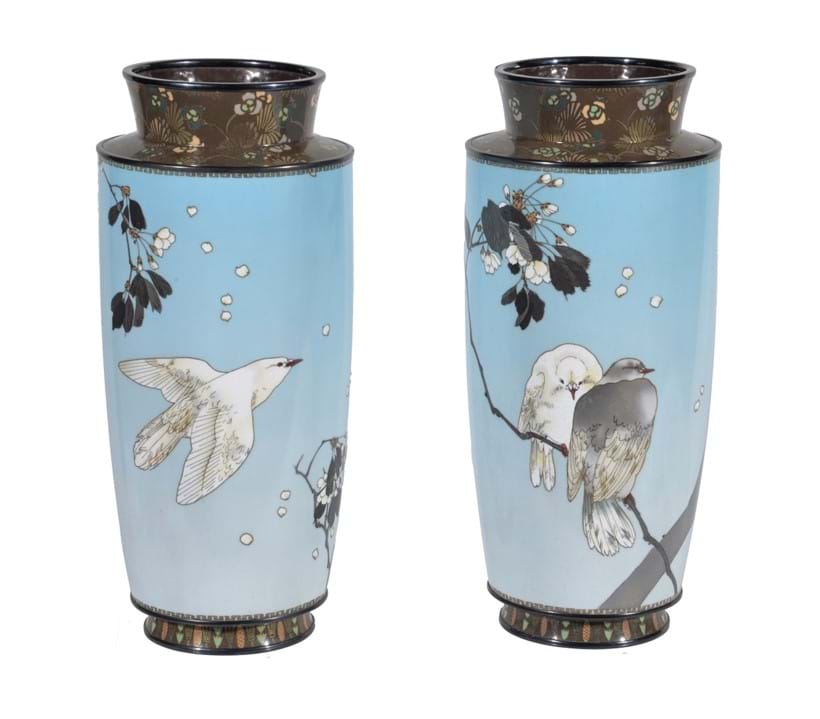 This pair of bronze shishi date from the Meiji-Tasho era; each beast has a slightly turned head, a wide open mouth and with a forepaw raised and resting on a brocade ball.

The concept of guardian lions originated in Chinese Buddhism, later spreading to other parts of Asia, including Japan. Lion symbolism spread via Indian culture and Buddhist symbolism, and statues of guardian lions were placed in front of Chinese Imperial palaces, Imperial tombs, government offices, temples and the homes of the wealthy, from the Han dynasty (206 BC - AD 220).  They were believed to possess powerful mythic protective benefits. Pairs of guardian lions are still seen today at the entrances to supermarkets, hotels and restaurants in Chinese communities around the world.

Ritsuo - the old man with the straw hat

Ogawa Haritsu (1663-1747), was an artist in the Edo period. He was given the name of Ritsuo ('the old man with the straw hat') in the period leading up to his residence in Tokyo, where through various teachers he developed his innovative approach to lacquering and honed his aesthetic. Ritsuo was also a painter, potter and sculptor and so to later generations conformed somewhat to the ideal of artist-craftsman - a revered concept which was to grow in response to the rapid industrialisation of the 19th century and which found expression in Britain in the Arts and Crafts movement.

This 19thc. Revival box is decorated with inlaid mother-of-pearl, pewter and gold hiramakie (decoration in low relief) and takamakie (raised relief) with flowers and foliage on a fundame (fine gold powder worked until it's flat) ground. The interior features a stylised pine forest, following a similar technique. 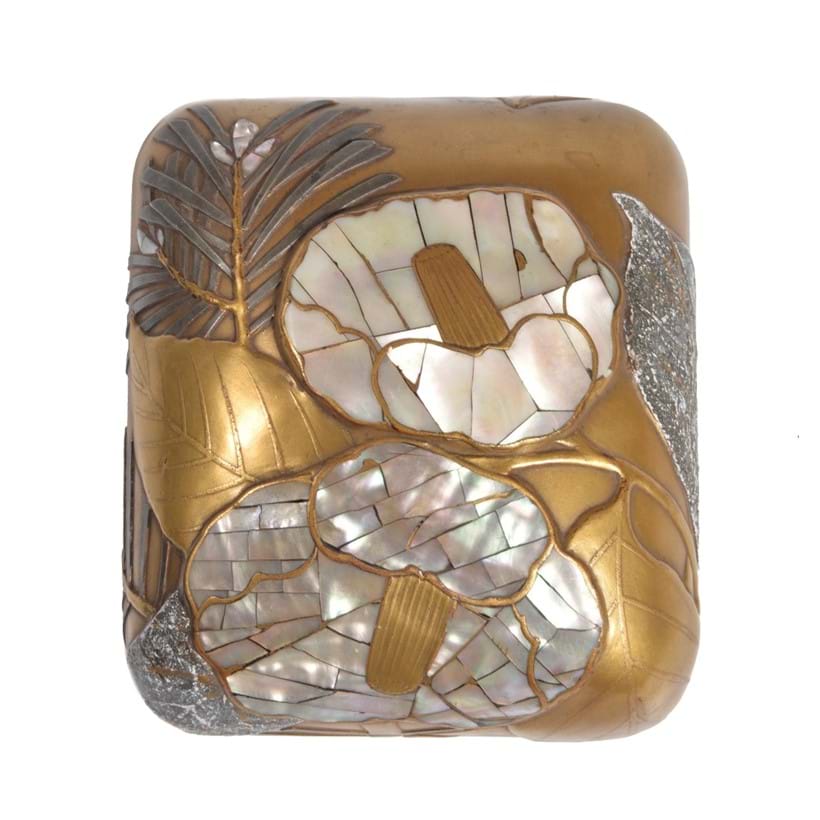 The Meiji Period owl here seated on the branch of a withered pine stump appears to gesticulate or communicate with his left wing and his head is turned slightly to the left. Details are picked out in gilt and shakudo (a mix of gold and copper, which can be treated to develop a patina resembling lacquer) wash, the plummage is particularly well rendered and the pine stump is naturalistically cast. 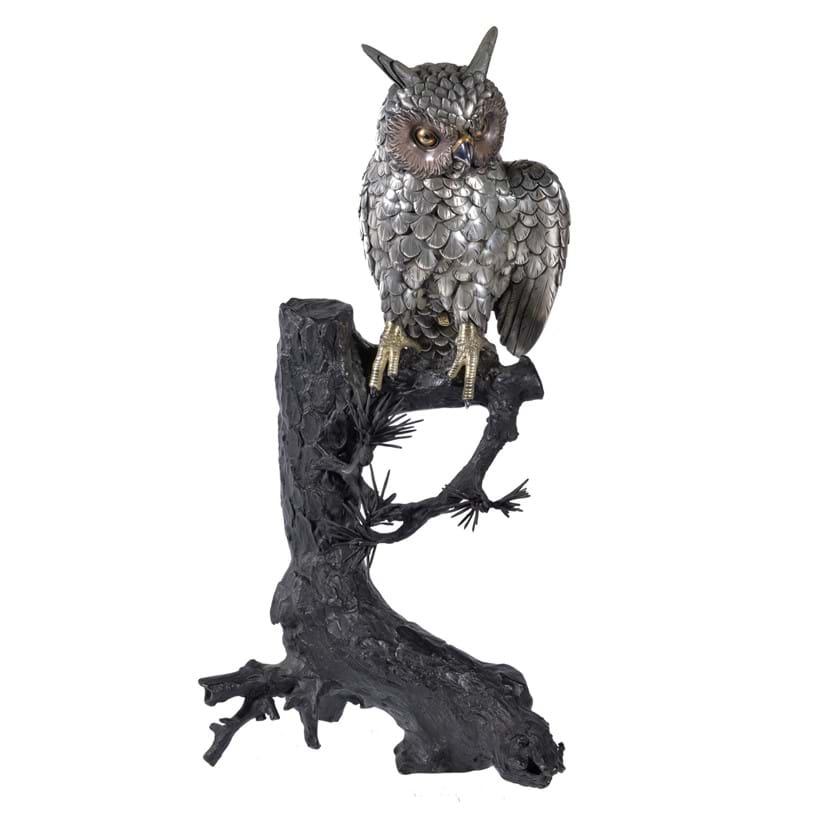 This Miya-o style Japanese archer is extremely well modelled, he stands poised with one leg forward as he sights along the arrow notched to his bow. He wears a kabuto (armoured helmet) with stag-antler maedate (frontal decorations) and is in action on the original Meiji Period wooden stand. 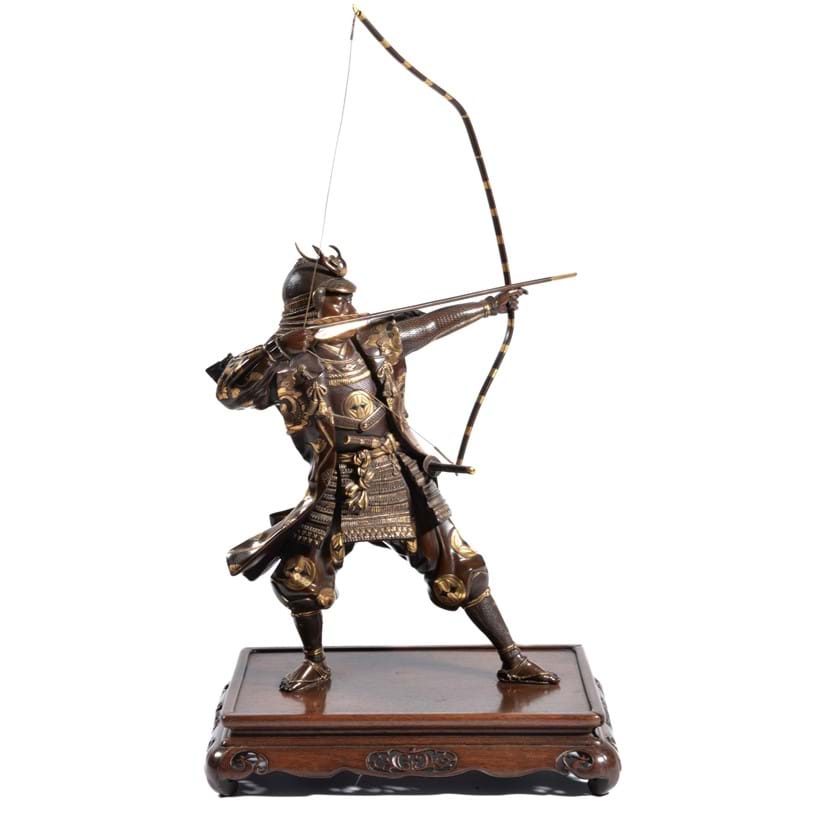 These vases of elongated ovoid form from the Meiji Period each rest on a short, splayed foot rising to a cylindrical neck. They are decorated in kebori, katakiribori and iroe taka-zogan (carvings and raised work), with panels of birds disporting themselves amongst the branches of maple, cherry, willow and peony trees, on a ground of diapers and waves. By contrast, mythical creatures in sunken relief reserves sit below the necks of the vases. 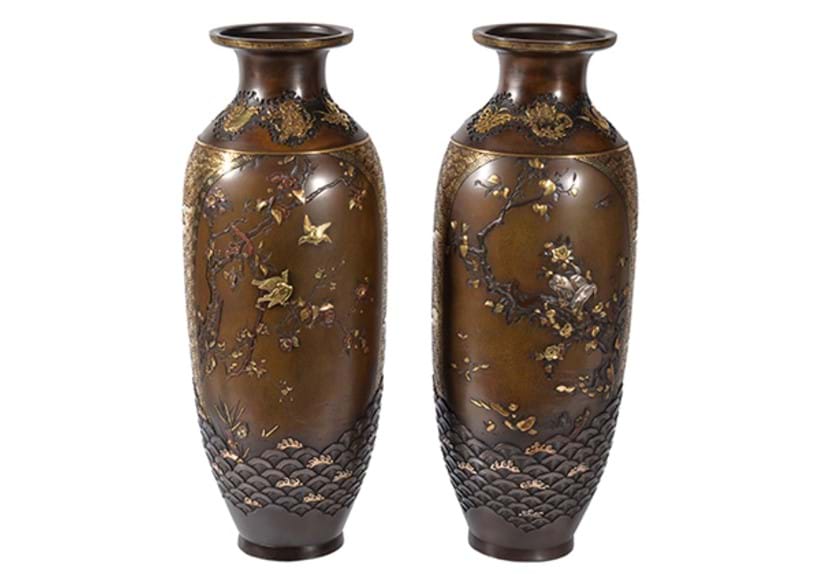 From a group of woodblock prints, lot 457 is by Shimura Tatsumi (1907-1980). The artist is renowned for his depictions of beautiful women. As a young man he worked as an illustrator for newspapers, serialised novels and magazines and he later collaborated with the Japanese Institute of Prints to create the series 'Five Figures of Modern Beauties’, published in 1953. The prints depicted Japanese women in traditionally feminine poses and attire and the finely detailed figures are shown against very simple backgrounds. 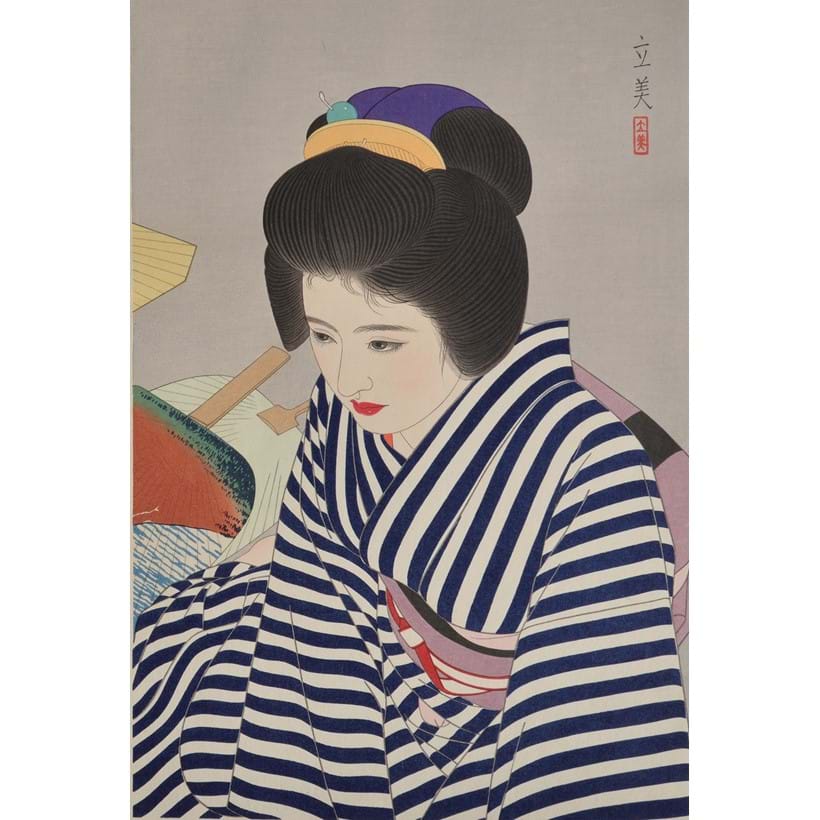