The auction of Fine Pictures, on 26 April, featured an extremely wide range of works dating from the 18th century through to the present day, in a variety of media and by British and international artists.

From an early oil on panel, Study of birds, flowers and insects, attributed to Charles Collins (British c.1680-1744) through to more recent works by Andy Warhol and Howard Hodgkin, strong prices were realised across the full range of lots in the auction. We present some highlights from the sale here.

We are now looking ahead to the next auction, Fine Art on 18 July, and we would be delighted to hear from you should you be interested in consigning to the sale. The closing date for entries is 30 May, contact us: pictures@dreweatts.com | +44 (0)1635 553 553.

Cotman's work, dated 1818, depicts Quiddenham Hall, at around the time it was owned by George Keppel, 3rd Earl of Albemarle. There had been a house on the site from the year 1000 and only in 1948 did it pass to the Carmelites of Rushmere who re-established it as a monastery of Carmelite nuns.

John Sell Cotman was an extremely prolific artist - he produced hundreds of drawings, taking his inspiration from marine and countryside scenes and working in oil, watercolour, pencil and chalk. 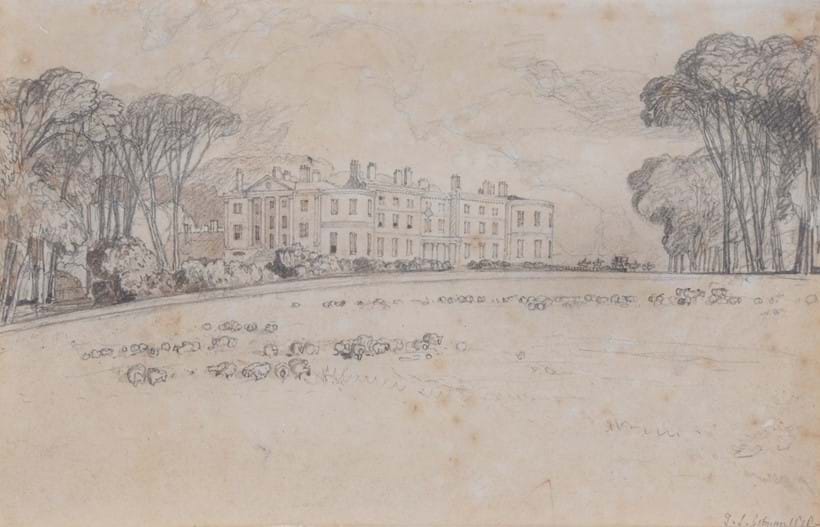 Painted in a small village approximately 50 km from Rouen this painting is typical of Lebourg's interplay between colour and light. Lebourg is associated with the Rouen school, a term first used in 1902 by Arsène  Alexandre in the catalogue for an exhibition by Joseph Delattre.

In 1876 having studied at the École des Beaux Arts from a young age, Lebourg exhibited for the first time with Monet, Sisley, Renoir and other artists on the Boulevard Montmartre.

Lebourg worked in a luminous impressionist style and created over 2,000 landscapes during his lifetime. He was made Légion d'honneur in 1924 and his works are to be found in many French musuems, and notably in the Museé des Beaux-Arts de Rouen. 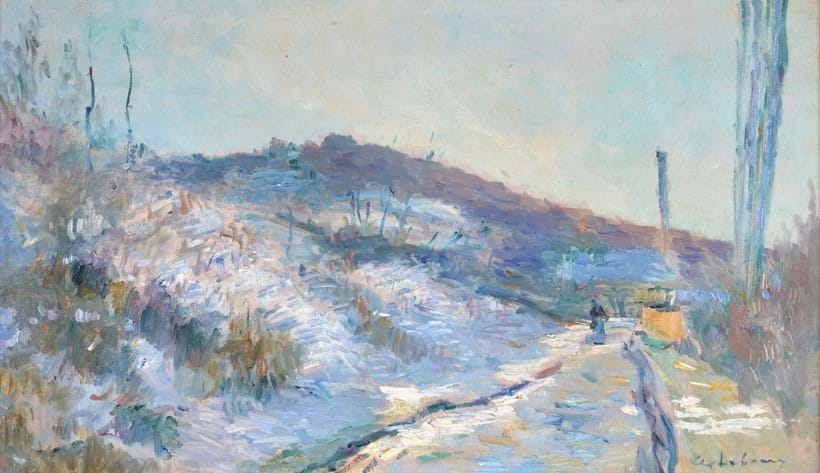 Walter Steggles depicted the English landscape, particularly East Anglia, in a highly distinctive fashion. And, Suffolk farm is notable for its quirky depiction of the trees and foliage surrounding the farm, which itself occupies a small part of the canvas.

Steggles was the last known survivor of the East London Group of artists who between them put on several exhibitions, gained much press coverage and whose works were acquired by notable collectors.

Steggles worked closely with Walter Sickert's dictum in mind 'A picture must have a 'Look here!' quality... If you don't attract people, why should they bother to look?' 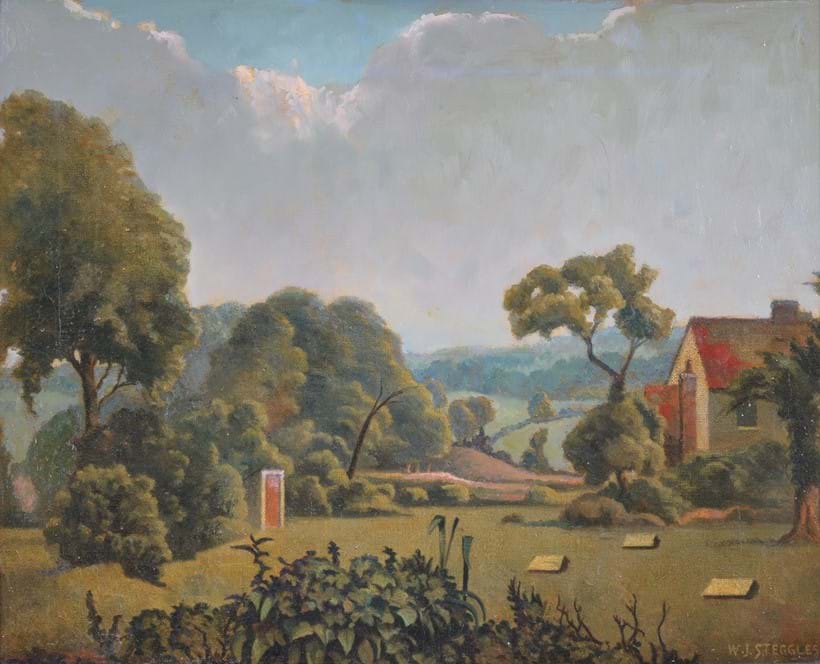 'One of the major painters of the 20th century'

The son and grandson of Scottish fishermen, the themes in Bellany's painting here are close to home, although after initially studying at the Edinburgh College of Art, he travelled extensively overseas as he came to understand how the traditions of the great Northern painters could be connected to his own Scottish experience.

John Bellany's works are in the collections of several major North American art institutes and in 2003 Damien Hirst praised and acquired his works and hailed him as one of the major painters of the 20th century. 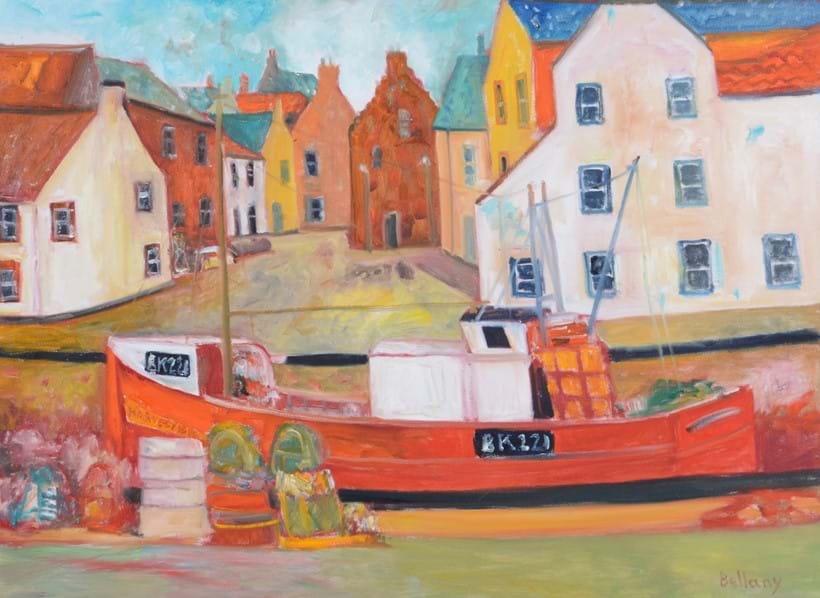 One of the foremost exponents of Op Art, Riley's works are full of movement, hidden images and flashing and vibrating patterns. Bridget Riley is probably best known for working in black and white, although from 1967 she began investigating working in colour with her first stripe painting dating from this time.

In Elapse lines of colour are used to create a shimmering, rippling effect.

Her works are to be found in numerous public galleries, and she has herself curated many shows and written on several artists, from Nicolas Poussin to Bruce Nauman. 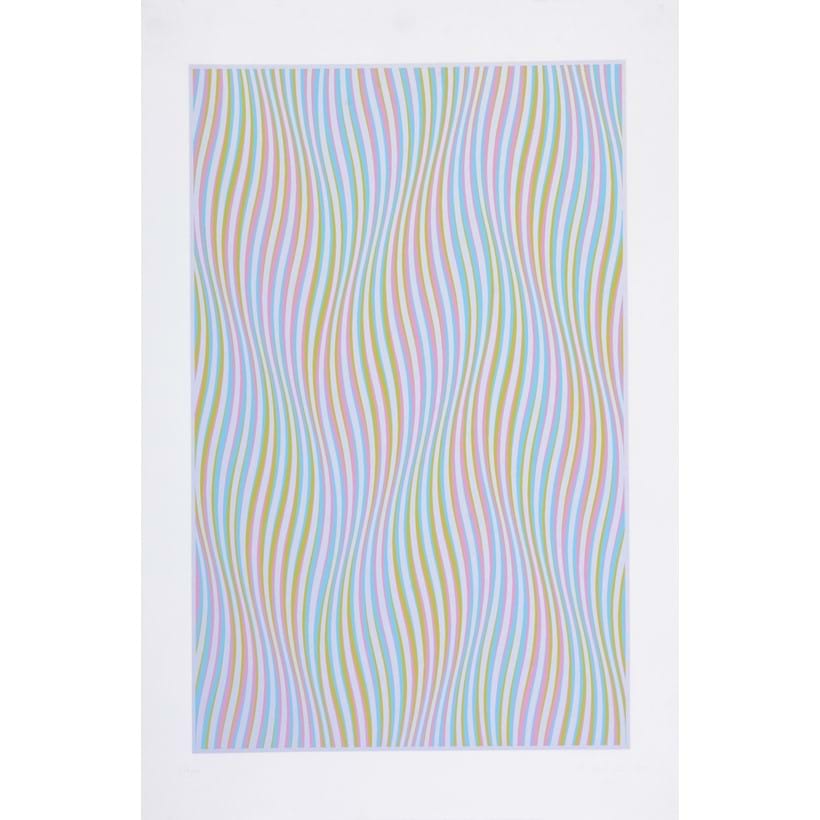 A feature of Howard Hodgkin's work was that he made the frame intrinsic to the work, as Nicholas Serota observed 'created as an illusion to give definition to his subject'.

Early on Hodgkin had decided he was to have a career in art and he ran away from school to pursue his dream. His first solo show was in 1962, in 1984 he represented Britain at the Venice Biennale and a year later he won the Turner prize.

He also collaborated with various dance companies and his work, Swimming, was one of twelve art works by British artists chosen for the 2012 Olympics. 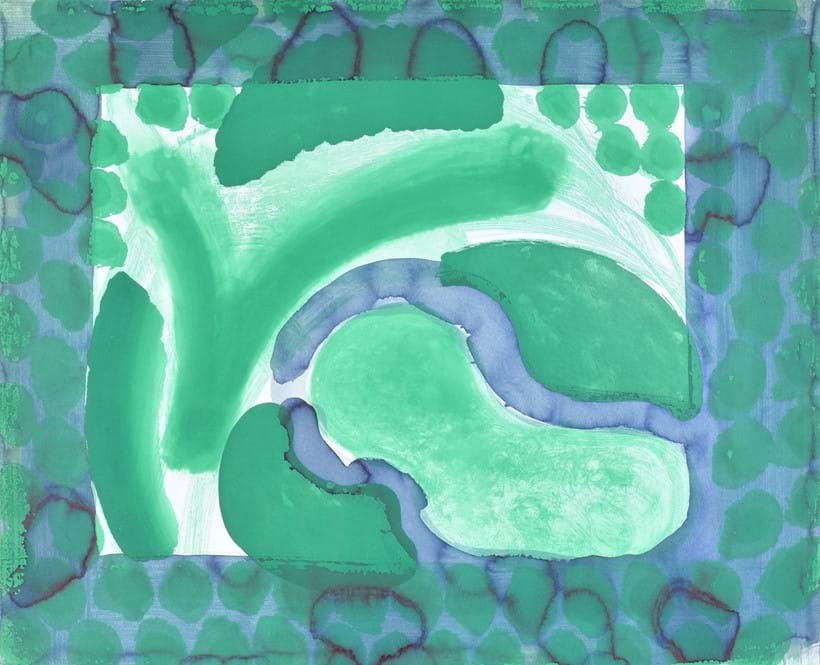 The leading figure in Pop art

Andy Warhol needs no introduction, the leading figure in pop art, his works explored the relationship between artistic expression, celebrity culture and advertising all of which came to the fore in the 1960s.

In Mobil he decorates and embellishes an advertisement using the skills he had honed as a successful commercial illustrator.

Warhol has been the subject of numerous books, films and exhibitions, and demand for his work at auction is consistently strong. 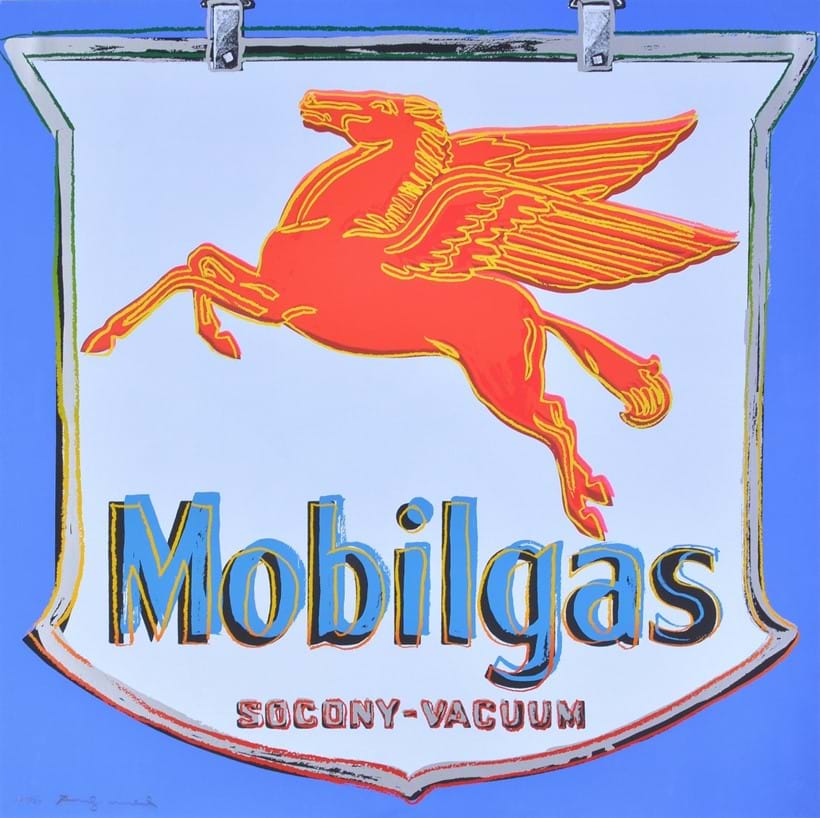