Rediscovered Work 'The Captive, from Sterne' by Josiah Boydell to be Auctioned | Old Master, British and European Art Auction

Rediscovered Work 'The Captive, from Sterne' by Josiah Boydell to be Auctioned | Old Master, British and European Art Auction

The present lot is a rediscovered drawing, once exhibited by John Boydell at the Shakespeare Gallery on Pall Mall in 1790. The drawing is a precise and exquisite drawing after The Captive, from Sterne by Joseph Wright of Derby completed in 1774, held by the Vancouver Art Gallery in Canada, currently on long term loan to the National Gallery of Canada. 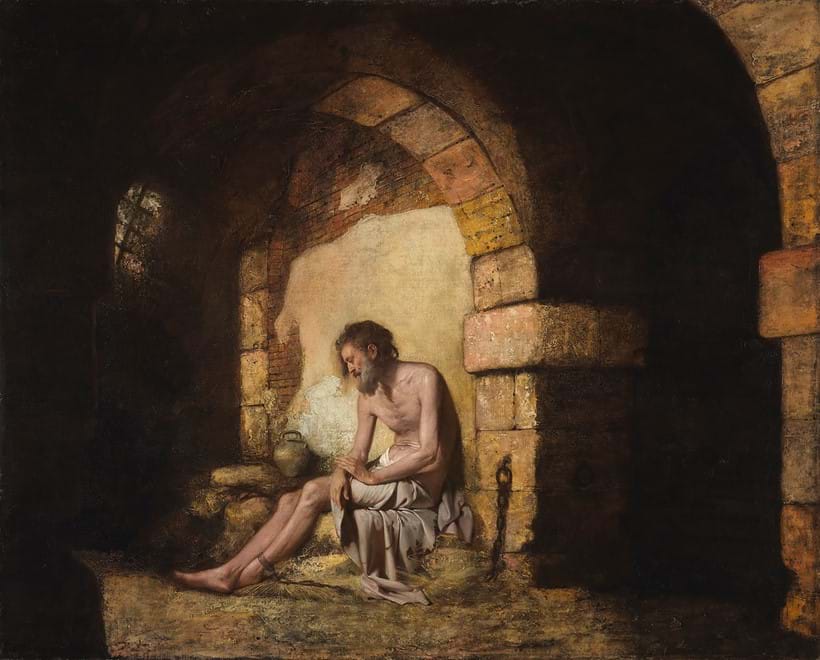 Wright was born in Derby in 1734 into a family of lawyers but he chose to move to London in 1751 to pursue his career as a painter, studying for two years under Thomas Hudson. Wright started his career focusing mainly on portraiture and landscape, experimenting with the effects of tenebrism in painting. Despite spending most of his career working in Derby, it is recorded that Wright took a trip to Italy setting off in 1773 with his wife Ann and fellow artists John Downman and Richard Hurleston.

It is believed that by late summer 1774 the couple were in Rome. Whilst few canvases have survived from this period, it is believed that The Captive from Sterne is the only piece produced during his Rome visit. The subject of the work derives from Laurence Sterne's novel A Sentimental Journey, set in 1762 when Britain was at war with France and foreign travel risked imprisonment. The main character is a court jester named Yorick who imagines losing his passport, being held captive in the Bastille and eventually released because he is thought to be an important person.

An engraving was made after the painting by Thomas Ryder in 1779, likely from this drawing by Josiah Boydell. The engraving was published in 1786 by John and Josiah Boydell (and likely available to purchase from the Shakespeare Gallery exhibition in 1790.) 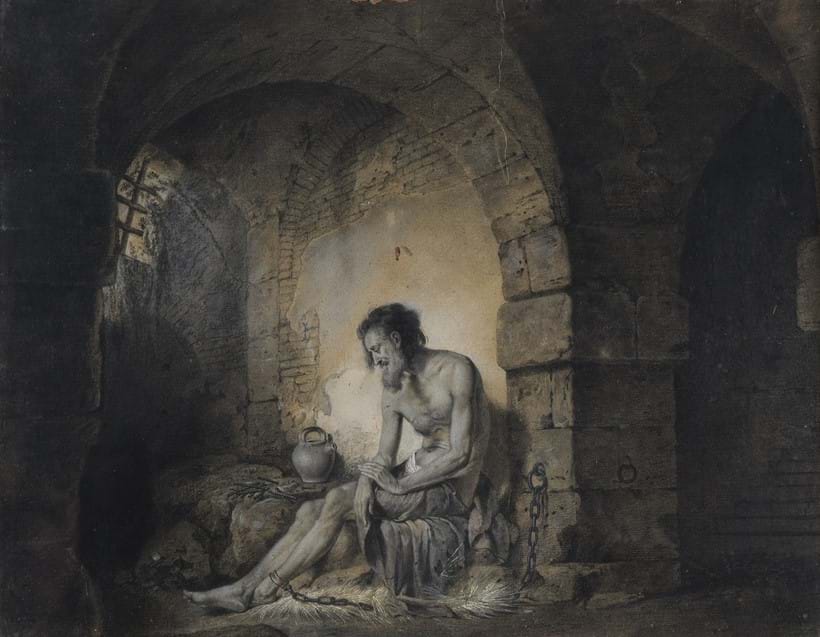 John Boydell (1720-1804), Josiah's uncle, was a publisher whose contributions to the print-making industry helped Britain become one of the leading players in engravings: his entrepreneurial approach to the traditional artist/patron relationship put the dealer at the forefront of business representing and promoting both artists and patrons. Boydell saw opportunity in producing prints of highly prized paintings by esteemed artists, that had won prizes, such as that at the Society of Art; subsequently the print market boomed, under his guidance, during the 1760s to 1790s. Some of Boydell's greatest success came from prints after paintings by Richard Wilson, Joshua Reynolds and Joseph Wright of Derby.

A catalogue of the Pictures, &c., in the Shakespeare Gallery by John Boydell, Published by H. Baldwin, London, 1790. Courtesy of the British Library, digitised by Google Books.

In 1770, Boydell rented large premises in Cheapside for his latest project producing prints based on paintings of Shakespearian subject matter, where he employed many engravers. Original paintings were exhibited in the gallery, with individual engravings and volumes of engravings together with text plates from the plays for sale. By 1789 he had to expand into a second gallery, the Shakespeare Gallery at 52 Pall Mall. However, financial pressures of the project started to prove too difficult to manage. This was caused by artists such as Joshua Reynolds demanding high prices. In 1786, Reynolds charged £500 for his painting of Macbeth and the Witches and when Joseph Wright's painting of Romeo and Juliet was rejected, Wright accused Boydell of favouritism and of prioritising artists such as Benjamin West Over others.

'Has it not equal, nay much more work in it ? It is not as highly finished ? And has not the public spoke as well of it ? Then why should you attempt to make any difference in our prices?' To which Boydell responded 'Had I ever presum'd to have classed the historical painters of this country perhaps Mr Wright's name would not have stood exactly where [he] has been pleased to place himself.'

John Boydell started to exhibit other works for sale, stating in the 1790 exhibition catalogue 'the following miscellaneous pictures are placed in the middle compartment of the gallery'. These works included 'The Murder of James the Fifth King of Scotland by Graham &c.' painted by John Opie and 'Portrait of G.A. Elliot, Lord Heathfield,' by Sir Joshua Reynolds.

Josiah Boydell, a trained engraver, was heavily involved in the Shakespeare Gallery with his uncle. The preface for the 1790 exhibition catalogue is signed off by Josiah along with John Boydell and George Nicoll. It is also evident that Josiah Boydell was involved from an artistic perspective. After studying the exhibition catalogue of 1790 it became evident that John Boydell had thought of additional ways of making income. An additional section in the exhibition is titled 'Drawings After the Most Capital Pictures formerly in the possession of the Earl of Orford at Houghton in Norfolk, lately purchased by the Empress of Russia' located in 'the room opposite the gallery'. There is a nota bene stating 'All these drawings were made by Messrs. Joseph and George Farington and Josiah Boydell.' Indicating that John Boydell was using his talented and established team of engravers to produce drawings after notable paintings as well.

This section leads through to 'Drawings after the most capital pictures in England'. The drawings were made by four artists, primarily known as engravers, Josiah Boydell, George Robertson, Richard Earlom and Joseph Farington.

Courtesy of the British Library, digitised by Google Books

Exhibition number 31, hung 'over the Chimney in the Great-Room' at the Shakespeare Gallery in 1790 is the present lot. The exhibition reference can be found in the catalogue on page 137 which has been digitised and is available to browse on the British Library website. Boydell also produced another work after Wright which, like The Captive was held in the private collection of Edward Pickering Esq. titled Maria, from Sterne.

Courtesy of the British Library, digitised by Google Books

The exquisite handling of the present drawing reflects the precision and accuracy approached by any trained engraver. Josiah Boydell, an established engraver, has entered the history books as a print-maker. However, the discovery of this drawing and the detailed analysis of The Shakespeare Gallery exhibition catalogue reveals a great deal more about Josiah and his artistic abilities.