Rare & Untouched | Old Master Painting of The Pantheon, Rome, by Jean Victor Faure to be auctioned | 26 May 2022

Rare & Untouched | Old Master Painting of The Pantheon, Rome, by Jean Victor Faure to be auctioned | 26 May 2022

Dreweatts is delighted to offer a recently discovered work by esteemed French 19th Century painter, Jean Victor Louis Faure (1786-1879) in our auction of Old Master, British and European Art on Thursday 26 May. The painting carries an estimate of £30,000-£50,000, and due to Faure’s work rarely appearing at auction, it is expected to be highly sought after by collectors around the world.

In this brief film Hamish Dewar, Art Conservator and Restorer, tells us how rare it is to find such a painting of this period in such good condition, literally untouched since the day it was painted.

The discovery was made in a family home in Norfolk, where the painting had hung unnoticed for sixty years. Entitled 'Market Day, The Pantheon, Rome', it was originally bought by the current owner’s father, a Major H. Mosse of Mendham Priory, Harleston in Norfolk in 1965 and hung in the hall of the house, where it would bear witness to various generations of the family rushing past it, totally unaware of its importance. 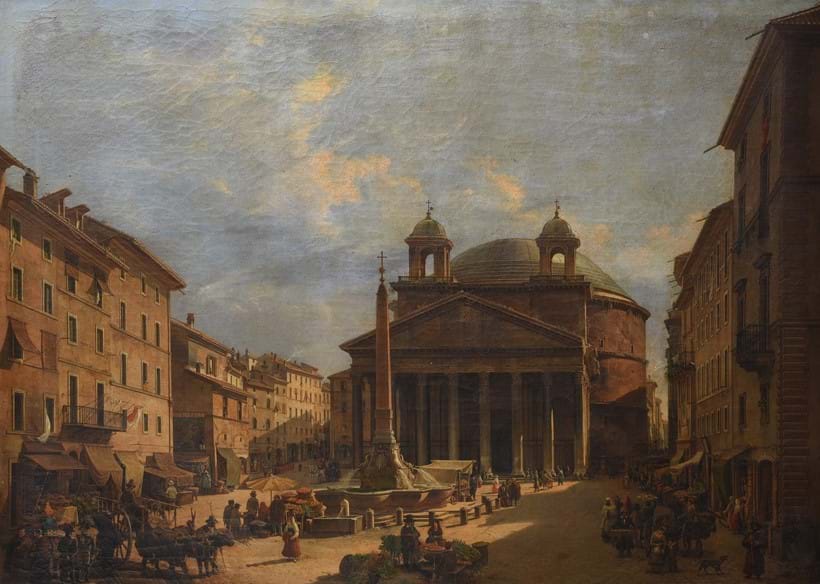 Speaking about the find, Major H. Mosse’s son explains: “My earliest recollection of this picture; a view of the Pantheon in Rome was the prominent position it occupied in the hallway of the family home for nearly sixty years, where it witnessed the comings and goings of family life, the many great friends who visited and even a wedding reception.

"For the most part it was just seen as an impressive picture occupying a large wall space with the occasional glance to acknowledge its existence. It wasn't until the end, when the house was cleared and the only item left was the picture still hanging on the wall in its same prominent position; which stood out even more so now. This peaked my interest to find out a little bit more about the artist Jean Victor Louis Faure, as obviously, I had never thought of asking my parents during their lifetime anything about the picture, surprisingly, this has turned out to be an `important-re-discovery' of this impressive picture that I had grown up with”.

Works by Faure rarely come up at auction, as Brandon Lindberg, Dreweatts Head of British & European Pictures explains: “It is rare to find a work on this scale and age in such untouched and original condition. Faure’s work only occasionally comes on the market and the most comparable example to this, sold over a decade ago for in excess of £200,000, which is still the record price for the artist”.

Faure was born in Berlin at the end of the 18th century to French parents. Once he himself had settled in Paris, he became a student of the famed historical landscape painter, Jean-Victor Bertin (1767-1842), whose extensive oeuvre is dominated by views of the Italian landscape. His depiction of the landscape and his treatment of light had a strong influence on all his students, including Jean-Baptiste-Camille Corot and Charles-François Daubigny.

Faure was one of many northern artists who embarked on a Grand Tour of Italy to observe the beauty of landscape and the effects of light in order to develop their art. The present veduta shows the influence on his work by the principle exponents of the local contemporary artistic culture in Rome such as Ippolito Caffi, who in his turn was inspired by 18th century urban landscape painters such Bernardo Bellotto and his famous uncle Canaletto.

The present lot depicts a view of the Pantheon in Rome. Originally built as a temple to all the gods of Ancient Rome, it has been a Roman Catholic church since the 7th century. As the best-preserved example of an Ancient Roman monumental building, the Pantheon has been enormously influential in Western Architecture from the Renaissance until well into the 20th Century.