Dreweatts is delighted to announce that it will be holding a charity auction in conjunction with celebrated contemporary artist Ann Carrington, to raise funds for Royal charity, the Queen Mother’s Clothing Guild as they celebrate their 140th anniversary year.

For the auction, the artist has generously donated a unique work titled Pearly Queen of St. James’s Palace, a large-scale piece encapsulating the well-recognised image of a first-class postage stamp.  The work features mother of pearl buttons hand-sewn by the artist on black linen. It sits in a perspex box frame and is estimated to fetch £10,000-20,000 when it goes under the hammer on 22 November 2022. 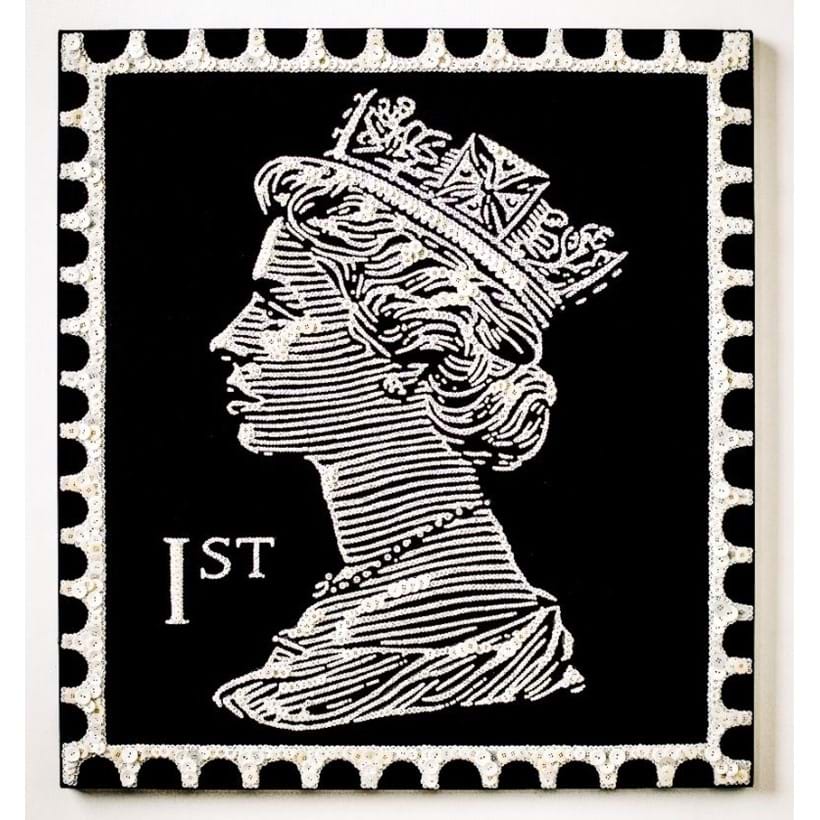 On donating the work, contemporary artist Ann Carrington said: “I am very proud to have made this special Pearly Queen artwork for the 140th anniversary of the Queen Mother's Clothing Guild. Hand sewn from thousands of mother of pearl buttons, each button represents the volunteer sewers and knitters whose hand made contributions since 1882 have enabled the charity to grow and flourish. The iconic Queen image is symbolic of the Royal Patronage received by the Guild and more important than ever today”. 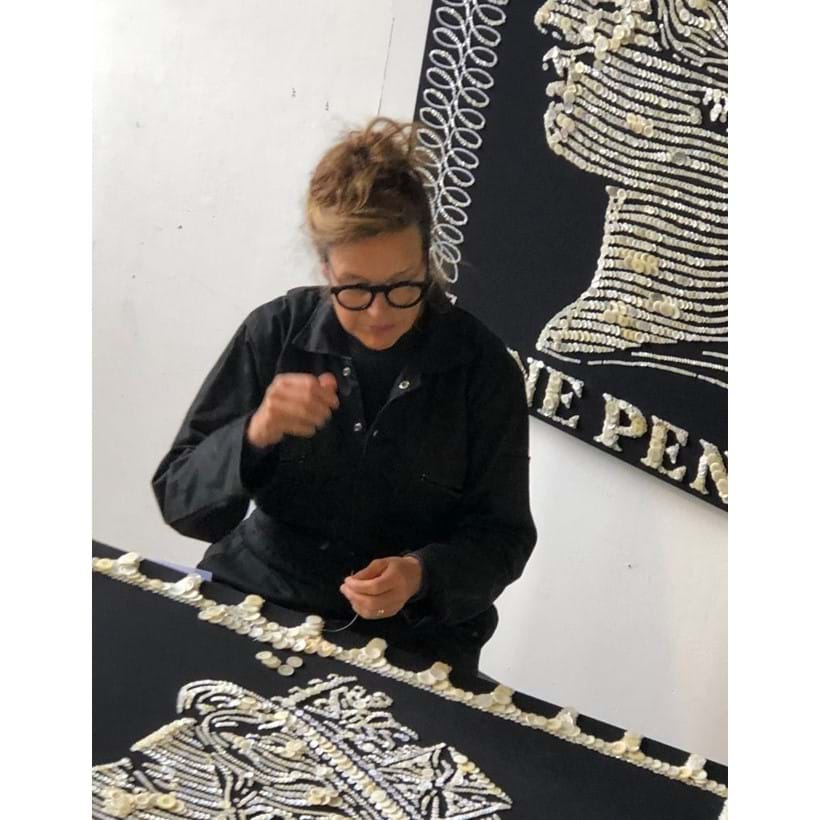 Commenting on this unique charity auction, the QMCG's patron since 2003, HRH Princess Alexandra, the Hon. Lady Ogilvy, said: "I am very proud to be associated with the Queen Mother’s Clothing Guild as it celebrates the great achievement of 140 years of helping those in need. The Queen Mother’s Clothing Guild is so grateful to artist Ann Carrington for creating and donating this unique piece for auction, the proceeds of which will contribute significantly to the vital work of the Charity to provide more new clothing and bedding to those in need across the UK."

Will Richards, Deputy Chairman of Dreweatts, said: “Dreweatts are honoured and proud to be supporting the Queen Mothers Clothing Guild, one the UK’s longest established charities. Ann Carrington has created the unique Pearly Queen of St. James’s Palace, to represent the fact that the Guild was founded in 1882 when the Penny Black was in circulation. The auctioning of this generous gift by this internationally renowned artist, will help raise important funds for the Guild whose work, especially now, is critical to so many.”

Join Elton John and Her Majesty The Queen in owning one of only 23 artworks made by the artist!

The artwork is one of only 23 of its’ kind made by the artist, with the first one being snapped up by Jacob Rothschild for the Rothschild collection. One of the works was commissioned by Her Majesty the Queen, with her version being produced in red and gold. It was commissioned to accompany a banner also made by Carrington for Her Majesty’s Golden Jubilee.  Other owners of works from this series include Elton John, Lulu Guinness and fashion designer Paul Smith, who all purchased them for their private collections. Carrington is also the only fine artist to hold a license from Royal Mail to produce artworks in the form of the postage stamp! 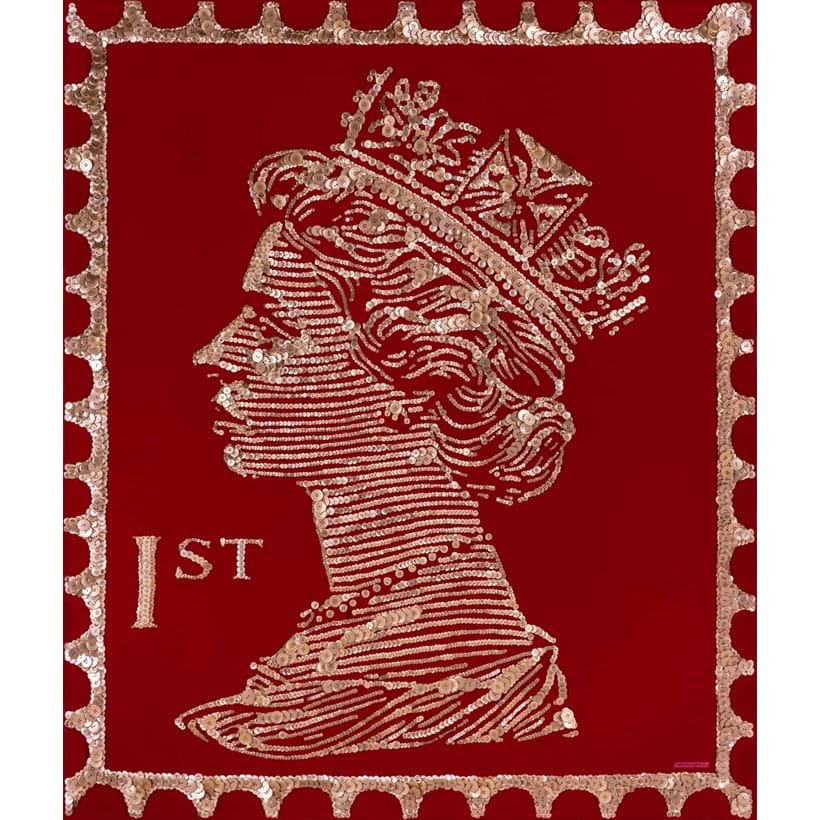 Every head and shoulders image of The Queen is drawn out separately, then sewn with buttons that fit that specific work, which means that all of the buttons are applied in a different way. Colours are also changed depending on the particular piece. The works in this group are all named after different areas of London that Carrington has lived or has special memories of and this particular piece carries the title of the Pearly Queen of St. James’s Palace due to its’ link to the charity. 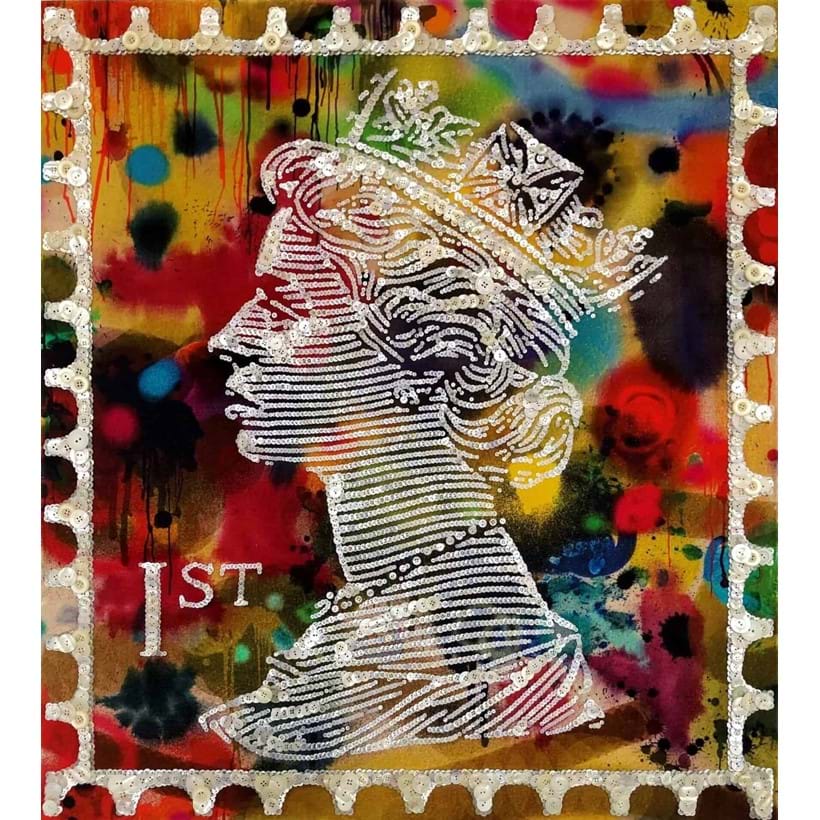 Ann’s work has become increasingly popular in recent years, with commissions around the globe for private collections, such as; HRH King Charles III, Queen Elizabeth II, The Duke of Westminster, Gwyneth Paltrow, Issey Miyake and Gordon Ramsay, amongst others. Her work is also held in many public and company collections including: The Victoria and Albert Museum, The United Nations, The Royal College of Art, The Design Museum, London, The Thames Diamond Jubilee Foundation and The Worshipful Company of Haberdashers, The National Trust, The Commonwealth Institute, Citibank, Waldorf Astoria, W Hotels, DAKS, Dunhill, Agent Provocateur and London’s fashionable Chiltern Firehouse.

The originality of her oeuvre is in the creative use of abandoned every-day items which are repurposed, as well as the use of multiples of objects to create pattern and interest, which is central to her function as an artist.  She explains that “all objects are saturated with cultural meaning which, as an artist, I seek to explore, unravel and investigate. Mundane objects such as knives and forks, barbed wire, pins and paintbrushes come with their own ready-made histories and associations, which can be unravelled and analysed if rearranged, distorted or realigned to give them new meaning as sculpture”. 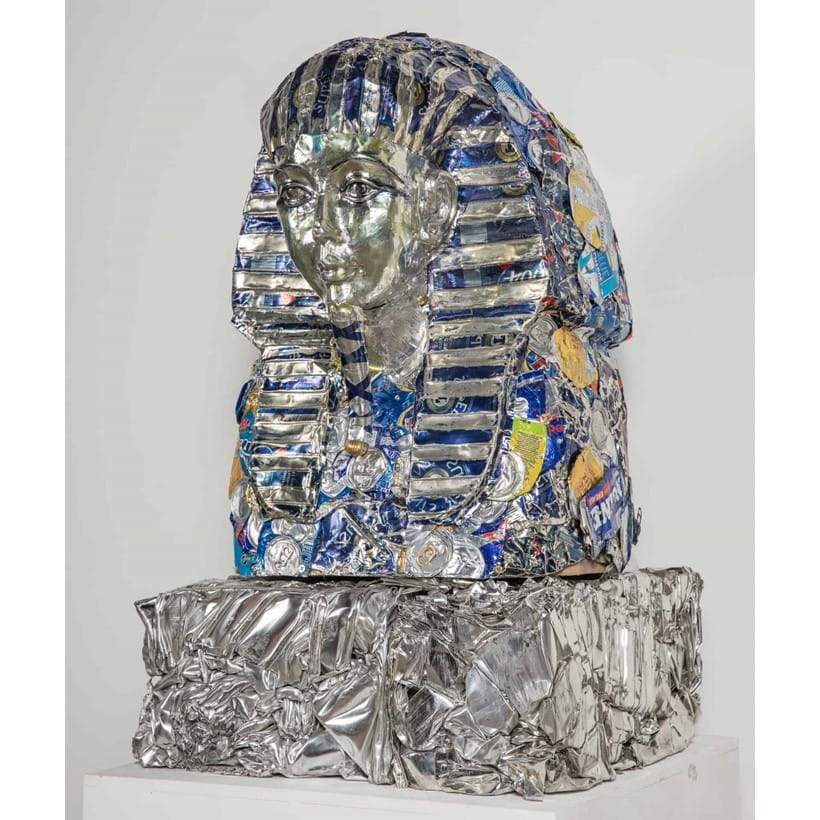 It is being donated by Carrington to raise funds for the Royal charity set up in 1882 by Lady Wolverton, whose friend Princess Mary Adelaide of Teck (mother of the future Queen Mary) became QMCG's first Royal patron. In 1897 her daughter, the Duchess of York (the future Queen Mary) became the patron, having helped her mother with the charity since childhood. It has remained under Royal patronage to date, having been renamed several times, including in 1910 when Queen Mary (on becoming Queen Consort) renamed the charity ‘Queen Mary’s Needlework Guild’ and in 1914 established St James’s Palace as its’ headquarters.

The charity, which makes, sources and buys new clothing, sleeping bags, bedding and towels to give to British charities (such as babies and children in hospital, the homeless and refugees, the elderly and people in hospices and women and children in refuges), still receives, sorts and distributes the clothing and bedding at St James’s Palace today. Queen Elizabeth The Queen Mother served as their patron for almost fifty years (from 1953 until 2002). It was renamed again in 2010 as the Queen Mother’s Clothing Guild, its’ title today, as a tribute to her.

Responding to charities across the UK

Speaking from QMCG, Hadley Denny explains: “The Queen Mother’s Clothing Guild is one of the UK’s oldest charities and from its’ foundation in 1882 its’ purpose has been to support those most in need. We respond to charities across the UK for clothing and bedding items that they have difficulty sourcing or funding themselves. We know that a gift of new clothing or bedding provides warmth and comfort, helping restore dignity and self-respect.

Over the year the Queen Mother’s Clothing Guild fundraises in order to source and purchase large amounts of clothing and bedding and our many supporters and volunteers also lovingly hand make thousands of hats, gloves, scarves, clothes and blankets. Every autumn, as we have done for over 100 years, we hold an event at St James’s Palace in London, where we sort, count and pack all of the clothing and bedding, ready for collection by the various charities. Distributing in autumn works well for many charities as their needs are greatest in the winter months. We hope this generous donation of a stunning work by Ann Carrington will help towards our central goal, to help as many people as possible.”

Auction:
Tuesday 22 November | 9pm GMT
This is an online only auction with live bidding (no video or audio feed of the auction).  Commission bids can be left via your online bidding account or you can bid live during the auction.  It is not possible to bid by telephone or leave a commission bid direct with Dreweatts.

View auction and register to bid.