On May 15 Dreweatts will offer The Collection from Plaish Hall, Church Stretton, Shropshire - The Property of Mrs Roy Merley and Family.

The auction will feature early oak furniture, works of art, paintings, carpets, silver, clocks, ceramics and glass and Asian ceramics and works of art. Many of the pieces dating from the 16th and 17th centuries were acquired specifically to dress the rooms at Plaish Hall.

Plaish Hall is a stunning Grade I listed Tudor house, standing in beautiful gardens and grounds and surrounded by the unspoilt countryside of South Shropshire. It is believed to be the first brick built house in Shropshire in the 1580s, (although parts of an earlier stone house were incorporated), at a time when the great majority of buildings in the parish of Cardington were timber framed.  Of special note are the chimneys of Plaish Hall which are thought to have been based on those at Hampton Court, they are considered to be the finest in the West Midlands.

From the early 1980s and over a period of 35 years Plaish Hall was initially meticulously restored and then maintained, its glorious Tudor style gardens were also reinstated.

Plaish Hall was re-built for Judge Sir William Leighton who on his death in 1607 left land to endow church repairs at St James’s, Cardington, as well as the sum of £50 for the making of his tomb in the chancel.  In his notes on the History of the Church and Parish of Cardington, G B H Bishop, appointed Vicar of Cardington in 1914, noted that ‘Cardington is surrounded by hills. The climate is bracing, and the temperature lower both in summer and winter than in less elevated districts’.

Plaish Hall sits close to a number of other magnificent Grade I listed late Tudor and early Stuart houses, as well as Wenlock Edge, the location for A E Housman’s A Shropshire Lad / On Wenlock Edge, which he completed in 1896. 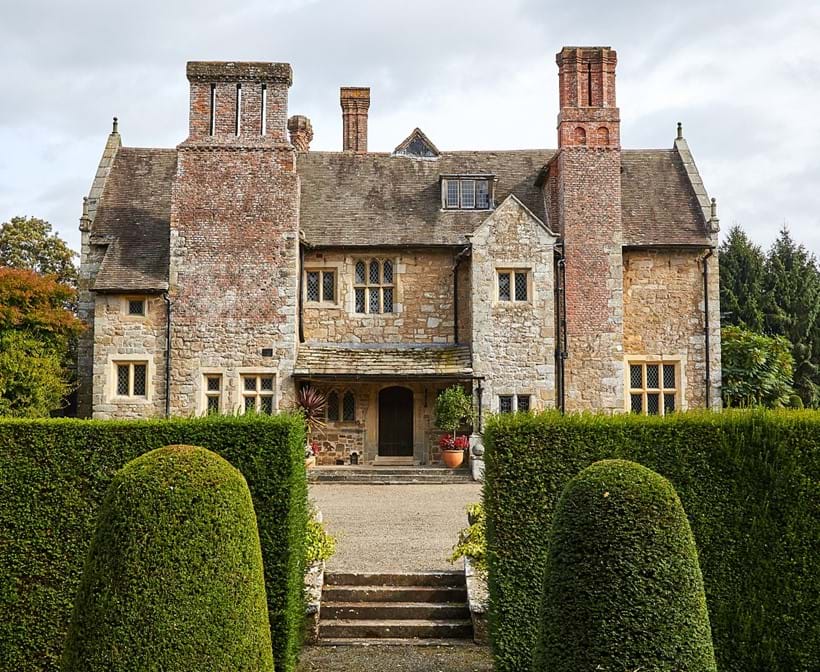 This set of three George II padouk chairs are from circa 1735 and each features a pierced and shaped back with an acanthus and shell carved top rail and central vase splat.  Their legs are shell carved cabriole finished with claw on ball feet at the front. Padouk timber has a unique reddish orange colouration which darkens over time to a reddish/purplish brown, it is moderately heavy, but strong, and possesses exceptional stability.

These chairs represent a fascinating early example of hardwood furniture of Cantonese manufacture made to an English design. As Carl Crossman explains in his The China Trade, this furniture may have been made to special order, perhaps for a member of the British East India Company posted in China or Macao, another company outpost. The fact that furniture of this type and early date is a rarity, is supported by the Company’s ledgers which only lists a few dozen pieces per year during the 1720s and 1730s. 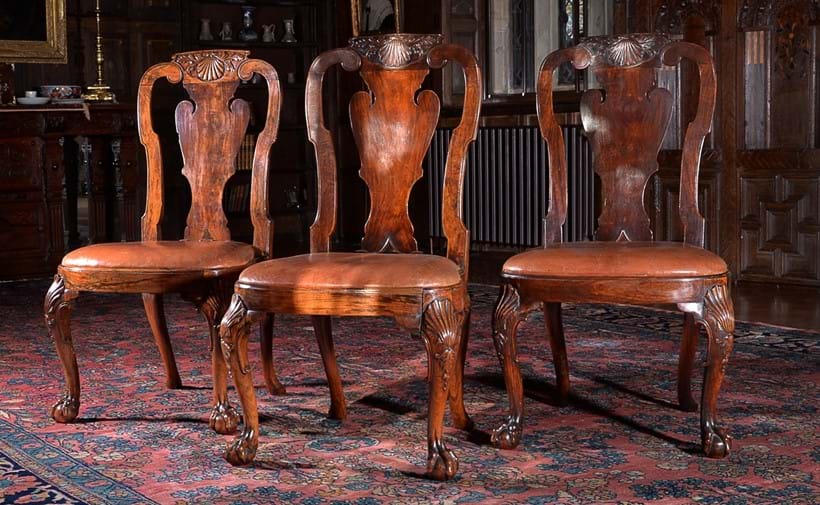 The landscape painter, Thomas Sidney Cooper (British 1803-1902), is particularly noted for his depictions of cattle and farm animals. He displayed strong artistic inclinations from childhood and at the age of 20 he went to London where he drew in the British Museum and was admitted to the Royal Academy. On his return to Canterbury he was able to make a living as a drawing master and the sale of sketches and drawings.

He settled in Brussels in 1827 but by 1833 he was back in London, due to the Belgian Revolution, and showed his first picture at the Royal Academy so beginning his long career as an exhibitor. Between 1847 and 1870 he collaborated with Frederick Richard Lee RA on several works, Lee undertook the landscapes and Cooper added animals to finish the scene.

Examples of Cooper’s work are held at Tate Britain, the V&A Museum and other public collections, mostly in England. 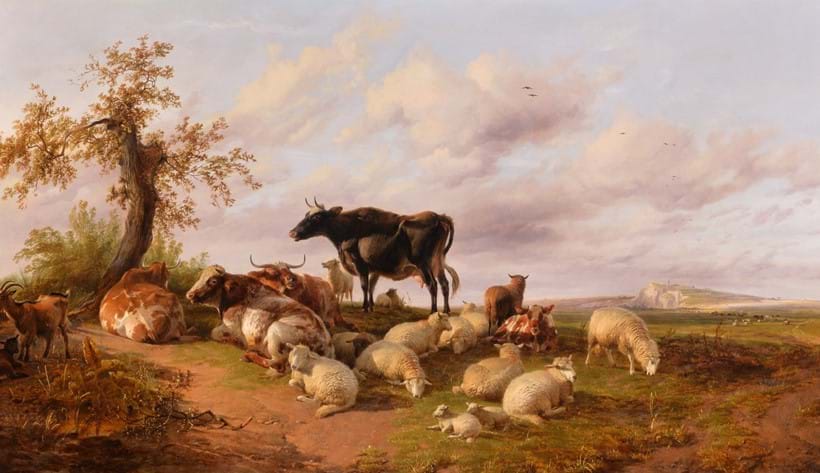 Top: Lot 133, a William and Mary kingwood oyster veneered casket or coffre-fort, circa 1690, with brass fleurs-de-lys shaped mounts throughout.

Its hinged top and front open to reveal an interior of two drawers, a hidden slide and a hinged compartment to the underside of the top

Bottom: Lot 207, from circa 1660 this Charles II snake wood, oak and walnut enclosed chest is an unusual piece in terms of its composition.

The moulded rectangular top above two drawers and a pair of mitre panelled cupboard doors open to three further drawers, on a plinth base. 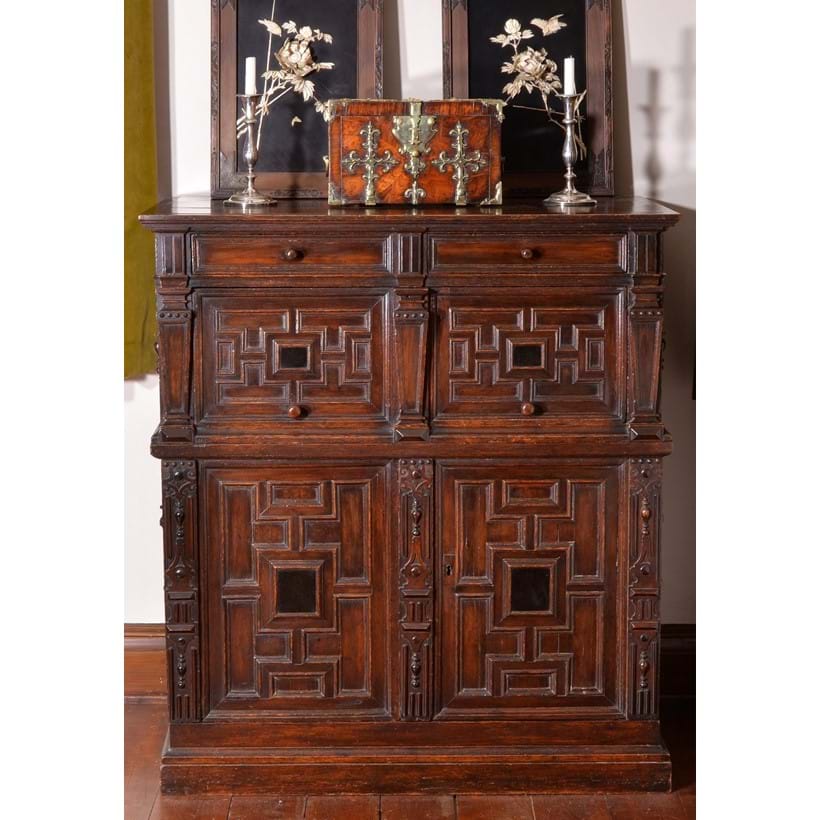 A large and diverse group of paintings

Another highlight from the large and diverse group of paintings, is HMS Queen Charlotte at Spithead, an oil on canvas, by the Scottish artist Adam Callander (1750-1817).

HMS Queen Charlotte was the first vessel to bear this name and was launched at Chatham dockyard in 1790. She carried 100 guns and was the flagship of the Channel Fleet, under the command of Admiral Lord Howe. The fleet depicted in this work are on the point of departure from Spithead, Howe set sail on 2 May in search of the French fleet with thirty-two ships of the line. The French fleet was located 400 miles west of Ushant and Howe pursued them for two days but did not engage the enemy until 1 June. Howe won a decisive victory, and on 24 June George III presented him with a diamond-hilted sword, he was made a Knight of the Order of the Garter in 1797. 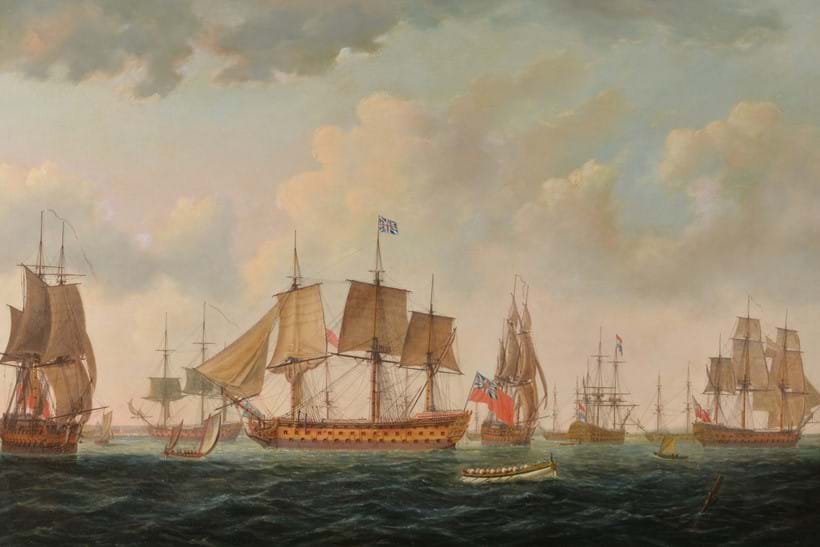