On 6 May 2021, Dreweatts will host an auction of Piet Jonker Garden Statuary and Ornament. The auction comprises over 260 lots with estimates ranging from £500 - £60,000 (+fees) and provides a superb opportunity for those looking for unusual and impressive garden features and design pieces.

Ahead of the auction, Dreweatts Specialist and Head of Sale, Ashley Matthews picks out his favourite pieces from the collection.

Here we have Lot 54, a wonderful late 19th century French cast iron urn, cast by A. Durenne, after the work by Claude Ballin I (1615-1678). The ovoid and part-lobed body is designed with a lattice border and is flanked by twin putti handles. It is raised on a waisted sole and square plinth and is stamped A. DURENNE SOMMEVOIRE. 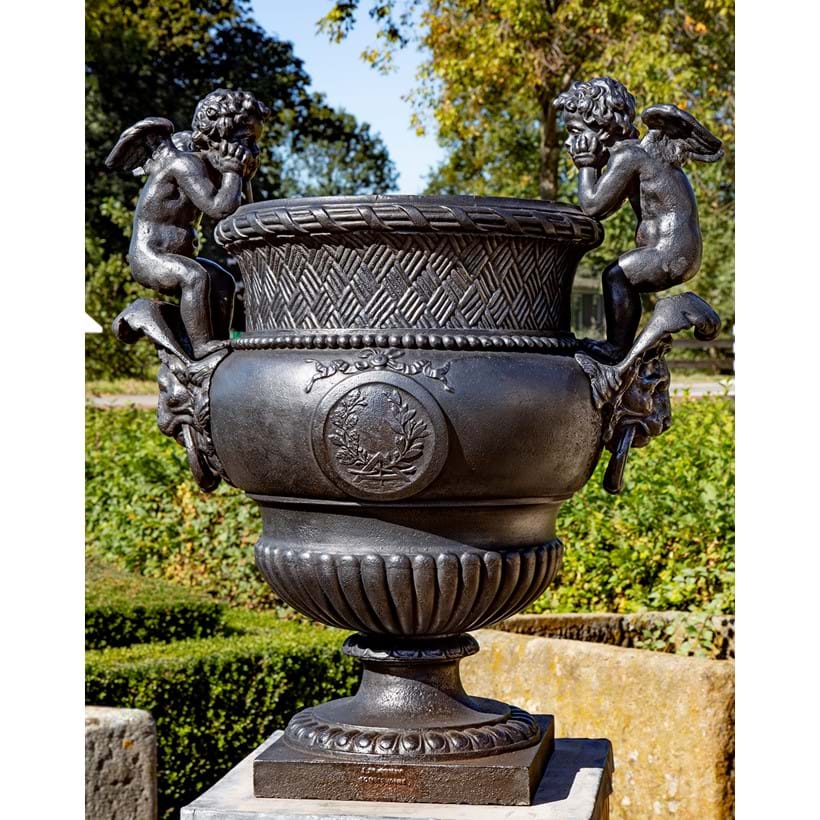 Claude Ballin was goldsmith to Louis XIV and was commissioned by the Sun King to create thirteen pairs of vases for the Parterre du Midi and Parterre du Nord at Versailles. Each of the thirteen pairs shows the influence of Mannerist designs, and some incorporate symbols of Apollo, God of the Sun, with whom Louis XIV famously identified himself.

Antoine Durenne's foundry at Sommevoire was renowned for the high quality of its bronze and iron casting (see Lot 255 for another work from this foundry). He is also thought by some to have cast the versions of Ballin's vases commissioned by Sir Richard Wallace (from whom the Wallace collection takes its name), for the Chateau de Bagatelle.

Continuing through the sale, we have Lot 110, a pair of 20th century sculpted limestone models of recumbent lions. These follow the designs by Italian sculptor Antonio Canova (Venetian 1757-1822), of the sculptures which can be found on the tomb of Pope Clement XIII at St Peter's Basilica. Each lion is portrayed with their forepaw resting above the other, on integrally carved rectangular socles. 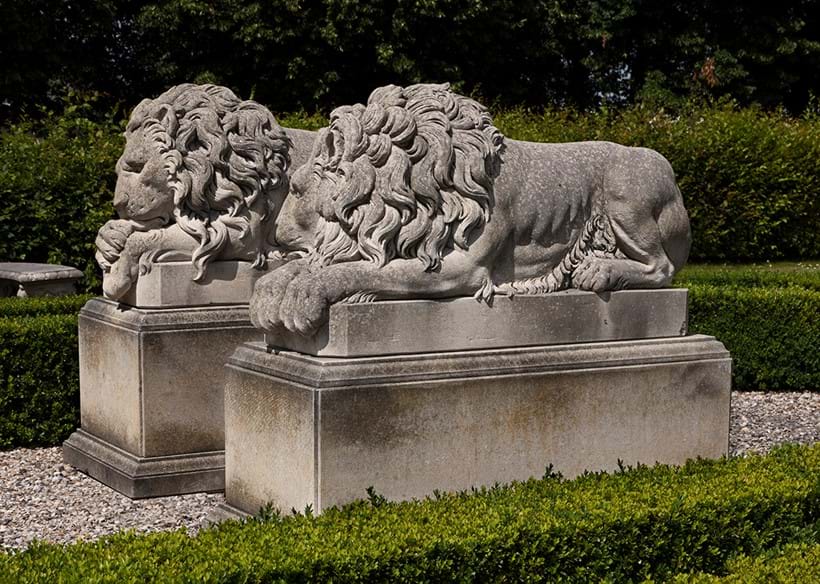 On his death in 1769 Pope Clement XIII was laid to rest in the Vatican, but Senator Abbondio Rezzonico (the nephew of the late pontiff) commissioned Canova to create a more fitting tomb for him in St Peter's. The work which includes Canova's lions in marble was completed in 1792, when the late pope's remains were removed to the new tomb.

A pair of sculpted marble models of Molossian guard dogs, after a 2nd century AD Roman model, the 'Jennings Dog' or the 'Dog of Alcibiades'

We also have Lot 124, this pair of 20th century sculpted marble models of Molossian guard dogs, sculpted after a 2nd century AD Roman model known as the 'Jennings Dog' or the 'Dog of Alcibiades'. They are portrayed as seated on their haunches and opposing on rectangular section marble plinths with panel sides. 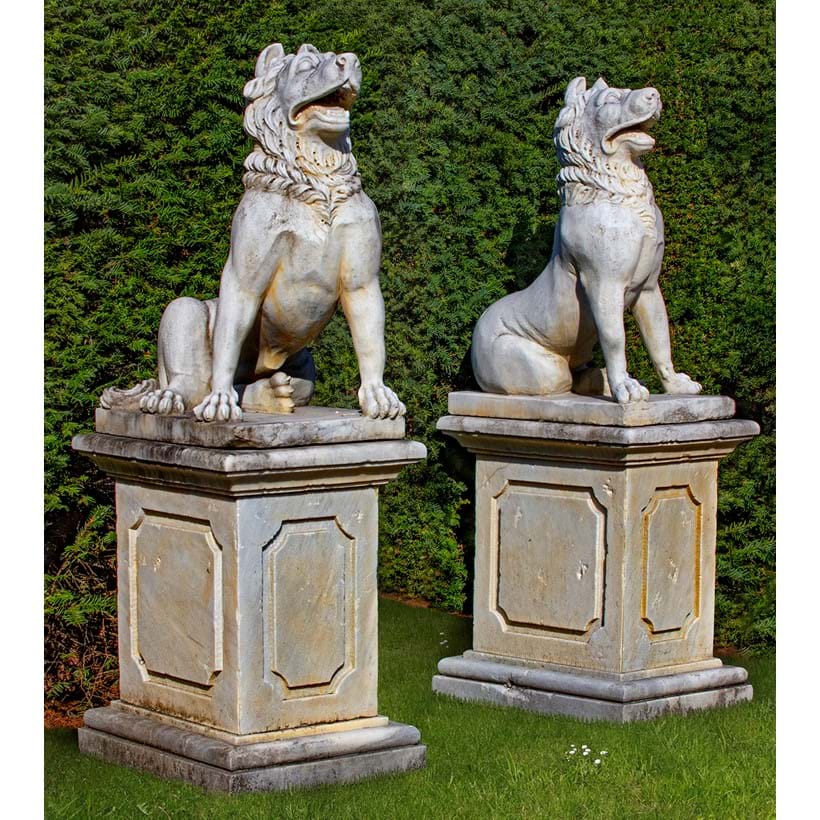 The Jennings Dog (also known as the Duncombe Dog or the Dog of Alcibiades) is named after its first modern owner Henry Constantine Jennings. It is a 2nd century AD Roman copy of a Hellenistic bronze original. Although it is one of only a small number of animal sculptures surviving from antiquity, a pair of similar marble mastiffs of the same model can be seen in the Belvedere Court of the Vatican Museum.

The breed has been identified by the British Museum as a Molossian guard dog. This breed was native to Epirus in north-western Greece, which was sacked by Rome in 168 BC, so it is assumed to have been associated with some civic monument in Epirus and to have been brought to Rome after the sacking. Pliny mentions a highly valued bronze dog surviving in Rome into his lifetime, before being lost in 69 AD.

A sculpted limestone model of the Samothrace Nike, 20th century, carved after the Antique

We also have Lot 145, a 20th century sculpted limestone model of the Samothrace Nike, carved after the Antique. 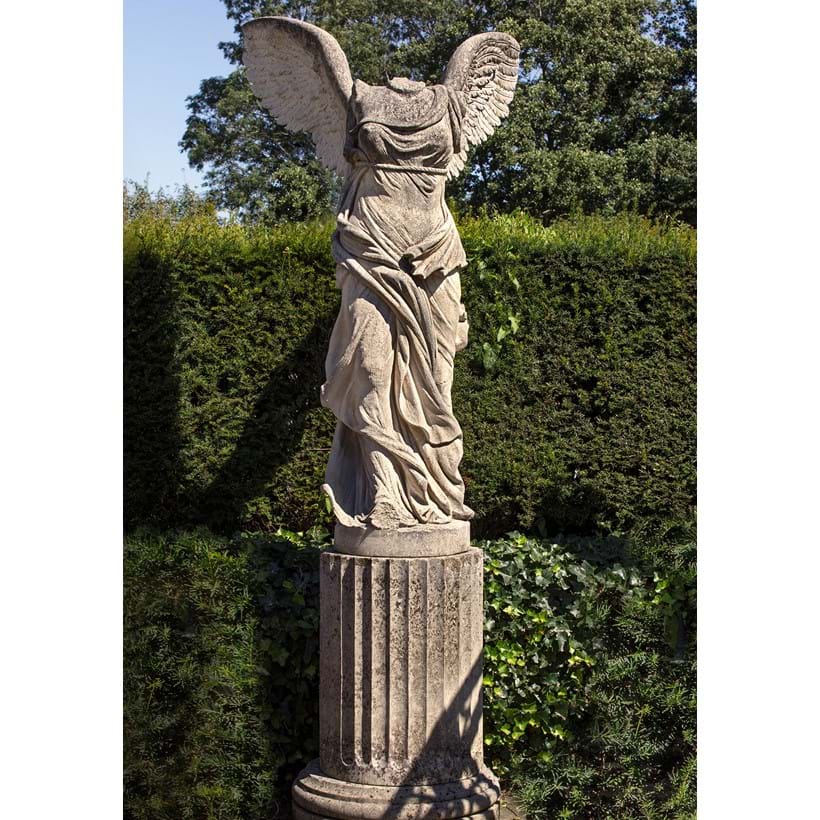 The Winged Victory of Samothrace, discovered in 1863, is thought to have been created around 200-190 BC. The work was commissioned to commemorate victory in a sea battle as well as in honour of the goddess. It is famed for the way in which it conveys a sense of action and triumph as well as portraying artful flowing drapery, the goddess being portrayed as descending to alight upon the prow of a warship.

Rendered in grey and white Thasian and Parian marble, the figure originally formed part of the Samothrace temple complex dedicated to the Great gods, Megaloi Theoi. It stood on a rostral pedestal of grey marble from Lartos representing the prow of a ship (most likely a trihemiolia), and represents the goddess as she descends from the skies to the triumphant fleet.

The Hellenistic original is currently held in the Louvre collection in Paris.

A monumental and impressive Italian sculpted limestone group of Bacchus with a satyr, early 20th century

Showing here is Lot 176, a monumental and impressive early 20th century Italian sculpted limestone group of Bacchus with a satyr. Bacchus, the Roman god of wine, is portrayed nude and standing, with a cup in his raised right hand and an infant satyr at his feet. 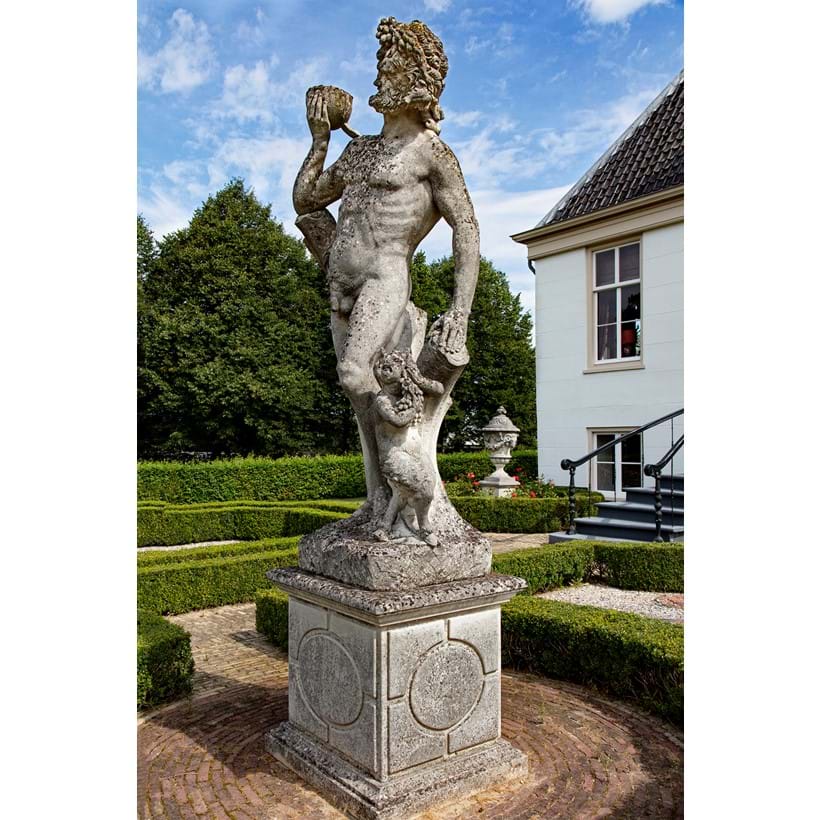 It seems that the sculptor of this striking limestone group was heavily influenced by Michelangelo's marble Bacchus of 1496-7, in which the master portrayed the wine god in a reeling, drunken posture. The inspiration for the work appears to be the description in Pliny the Elder's Natural History of a lost bronze sculpture by Praxiteles, depicting "Bacchus, Drunkenness and a Satyr". The sense of precariousness resulting from a high centre of gravity can be found in a number of later works by the artist, most notably the David.

If anything, the representation of the inebriated unsteadiness of the god in this lot is more emphasised, his torso almost involuntarily arching to his left in an apparent over reactionary attempt to balance. The more obviously portrayed drunkenness in the current example is further underlined by the differences in the treatment of the eyes in relation to the drinking cup. In Michelangelo's Bacchus the god is seemingly trying to focus his eyes in a concentrated manner on the skyphos before him, and succeeding; whereas in the example offered here there is more of a narrowing of the eyes, more of a suggestion of the blurred vision more associated with advanced inebriation that will come just prior to collapse.

In this respect, the rendition here is in fact a portrayal of a less refined and more animalistic Bacchus altogether. This Bacchus has been sculpted with more pronounced musculature than the more refined and Antinous-like model in the Museo Nazionale del Bargello and importantly, has been carved with pubic hair, whereas Michelangelo's was not. The depiction of the wine god as a more barbaric figure in this instance is therefore almost certainly by design.

A sculpted marble planter in the manner of a Roman marble basin and tripod, 20th century

Finally, here we can see Lot 210, this 20th century sculpted marble planter in the manner of a Roman marble basin and tripod. The basin is designed with an everted rim above a waisted band with three lion's masks carved in relief. The underside is then fluted and held on three rectangular section fluted and foliate cast legs with paw feet, around a central spiral carved baluster supporting column, with the waisted triform socle on a circular base. 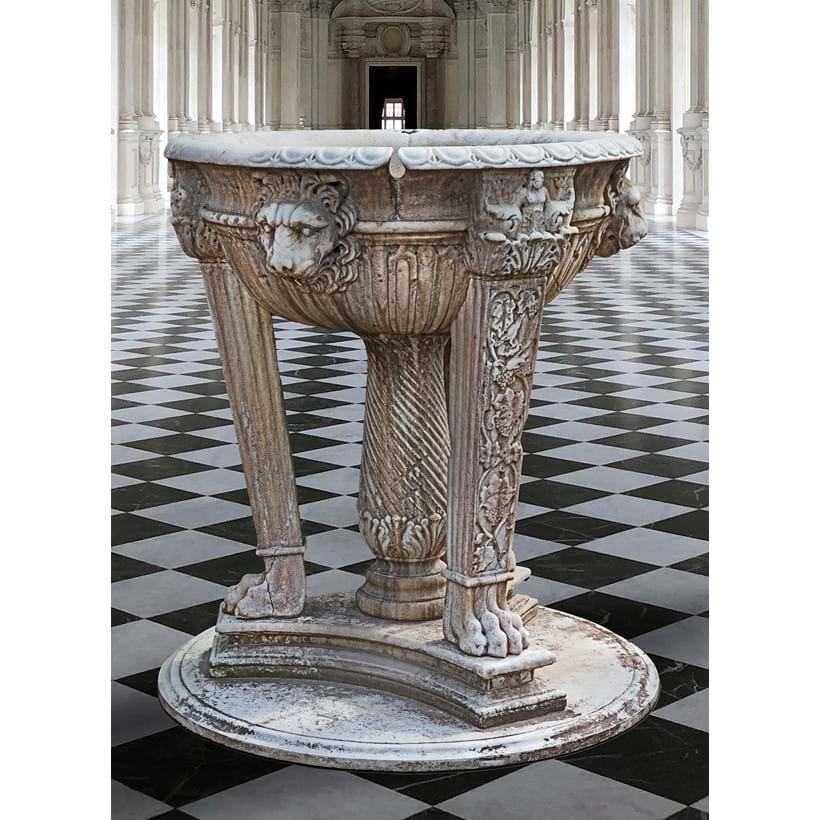 The Roman original which this example closely reproduces is currently held at the Capitoline Museum in Rome, and was one of the antiquities in that collection for which Giovanni Battista Piranesi created an etching.

The auction also features a wide array of garden furniture. A highlight is Lot 136, a pair of late 19th century white painted cast iron garden seats. Each is designed with an arcaded back, beneath a scrolled top rail. The ogee sides are pierced with botehs, with a pierced seat above cabriole legs. 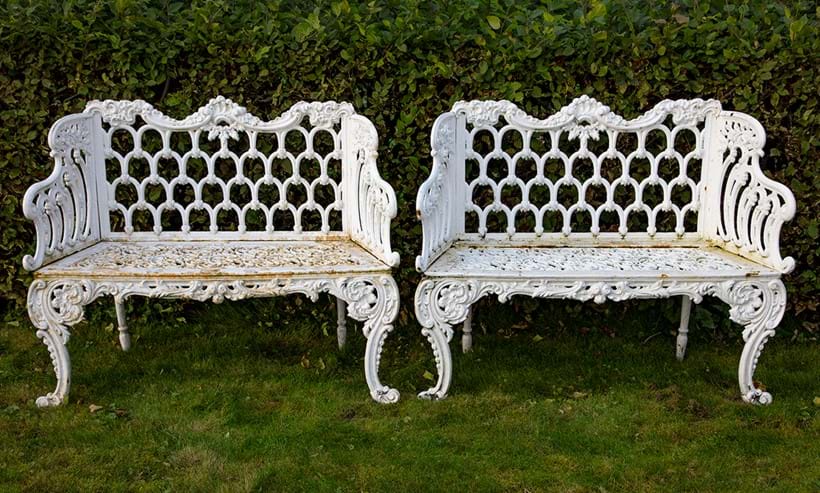 This is an online auction with an auctioneer.  The auction will take place at Donnington Priory, but please note all lots are stored and can be viewed by appointment at Piet Jonker (The Netherlands), NOT at Dreweatts.