The birthstone for the month of August, Peridot, is a lively and bright mid green gemstone, ranging in colour from olive green to bright grass green and yellowish green. The range of colour is down to the magnesium rich mineral olivine, which is a silicate of magnesium and iron and has been prized as a gemstone by many a culture and civilisation - from ancient Egypt to Polynesia for over 3,500 years. 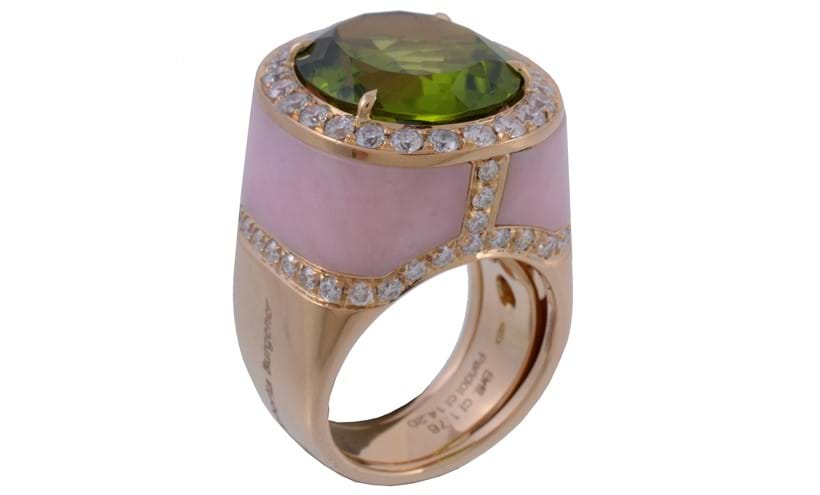 The Story of Peridot

Peridot has been mined and prized as a gemstone for nearly 3,500 years. Ancient Egyptian papyrus scrolls dating to 1500 BC record the mining of peridot on an island the ancient Greeks and Romans called Topazios, now known as St. John’s Island or Zabargad Island, in the Red Sea.

The Ancient Egyptians referred to peridot as 'gem of the sun', and they believed it had been sent to earth by an exploding star. Today peridot remains as the national gem of Egypt. Associated with light, it was believed to protect wearers from ‘the terrors of the night’, enabling a restful night’s sleep. It was also tied on donkey hair and worn around the arms to ward off evil spirits.

Peridots found their way into many fabulous jewellery collections throughout history but were often confused with other gems such as topaz and emerald. It is now thought that the legendary collection of emeralds owned by Cleopatra would have been peridots and may have been mined on the island of Topazios. During the Dark ages and Medieval period, peridots were used to decorate church ornaments, but again they were often confused with other gems. The 12th century Shrine of the Three Holy Kings in Cologne Cathedral is decorated with many varieties of gems and intaglios, including green stones that were believed to be emeralds, but are actually peridots.

In Hawaii, peridots are sacred to the Hawaiian goddess of fire and volcanoes, Pele, and are known there as 'The Tears of Pele'.

No one knows for sure where the name peridot originated, but it may be a French derivation of the Arabic word 'Fardat' which means gemstone. 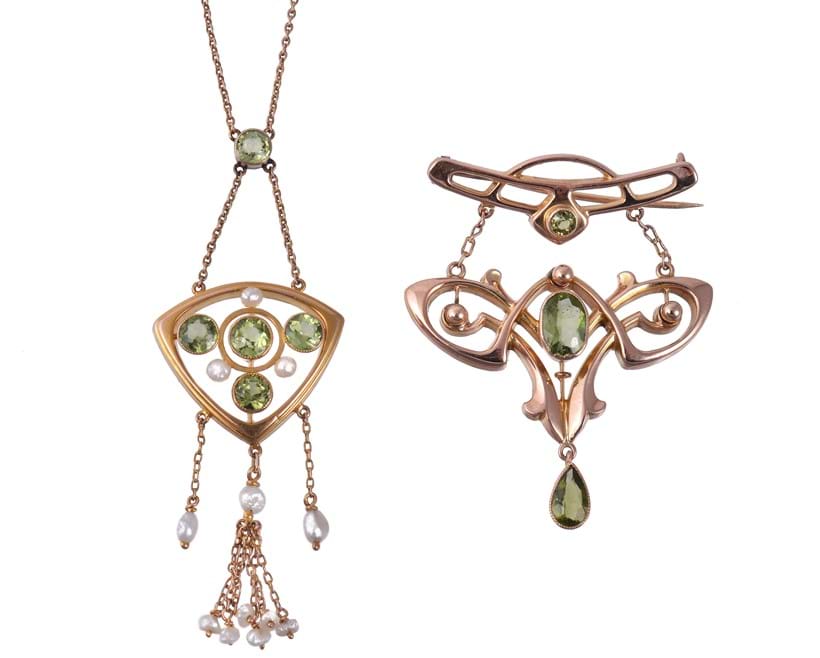 Peridots were popular in the early 19th century and Regency jewellery, sometimes set into fabulous parures of necklaces with matching earrings, brooches and stomachers. However, they somewhat lost their popularity during the middle of the 19th century, perhaps because the traditional mining sources were no longer easily accessible. New sources of peridot were found towards the end of the 19th century in the United States and other places, which re-kindled the interest in using it in jewellery. It is often found in Art Nouveau and Arts and Crafts jewellery from the later 19th century and beginning of the 20th century.

Peridots have traditionally been, and still are, used in in jewellery in conjunction with other brightly coloured gemstones such as amethyst, pink tourmaline and citrine to create vibrant, almost rainbow-like jewels. 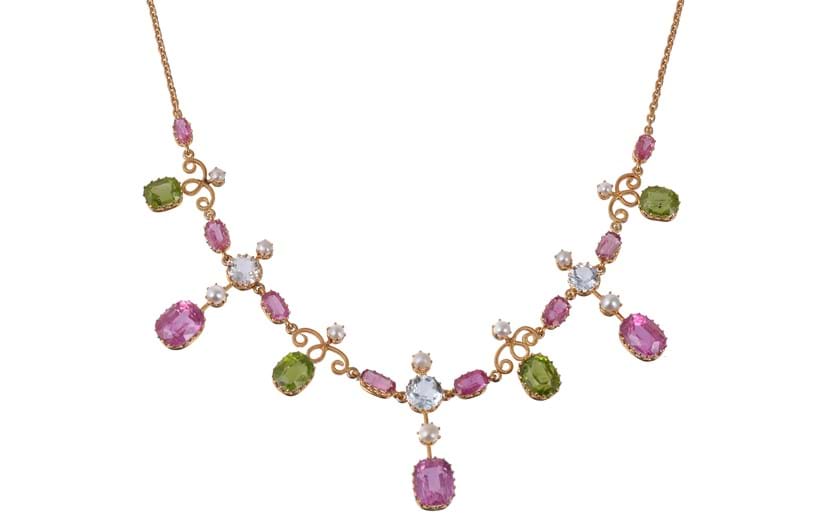 Where Peridots are Found

Along with diamonds, peridots are the only gems formed in the molten rock of the upper mantle, rather than the earth’s crust. Most peridots are formed in volcanic magma deep inside the earth, at 20-55 miles below the earth’s surface. They are brought to the surface by volcanoes, and are carried in lava flows, or by the movement of tectonic plates, which is what is believed to have created St John’s Island in the Red Sea.

Some peridots have also been found in meteorites. Thousands of the meteorites that fall to earth contain olivine, the parent mineral species of peridot, but only a few meteorites have contained any gem quality peridot. The most famous gem quality peridot find in a meteorite were those gemstones cut from a meteor shower that landed in eastern Siberia in 1749. Perhaps these meteor peridots are the reason the Ancient Egyptians believed they were sent to earth by an exploding star!

Today, gem quality peridot from Zabargad Island in the Red Sea is still very highly prized. However, the island is now part of an Egyptian National Park, and access is closed from time to time to prevent damage to its coral reefs and bird population.

Other sources of peridot have been found around the world in the 19th and 20th centuries. Today, more than 80% of the world’s peridot mining takes place in Arizona. Over millennia, there were volcanic eruptions across the desert in Arizona, in what is now the San Carlos Apache Indian Reservation, which have left large deposits of peridot crystals. The Apache families of the reservation have mined these peridot deposits for generations.

The best quality and most intense colour peridot can now be found in limited quantities in the Pakistani Himalayas. Another source of top-quality peridot is found on the northern slope of Kyaukpon, a mountainous region near the fabled gem city of Mogok in Myanmar (Burma). These Burmese peridots are also of deep colour and superb transparency.

Perhaps, however, the most exotic source of all is Hawaii, where the stone is revered and locally referred to as the 'Hawaiian Diamond'. In Hawaii, peridot is found in the lava flows of the Kilauea volcano. Coastal erosion near the volcano has made Papakōlea Beach in Hawaii green, as the sand is made up of tiny green olivine and peridot crystals from the volcano. There are only three other peridot green beaches in the world: Talofofo Beach on Guam; Punta Cormorant on Floreana Island in the Galapagos Islands; and Hornindalsvatnet in Norway.

Peridot of lesser quality is also commercially mined in China, Tanzania and Vietnam, among the other gem varieties found in these locations. 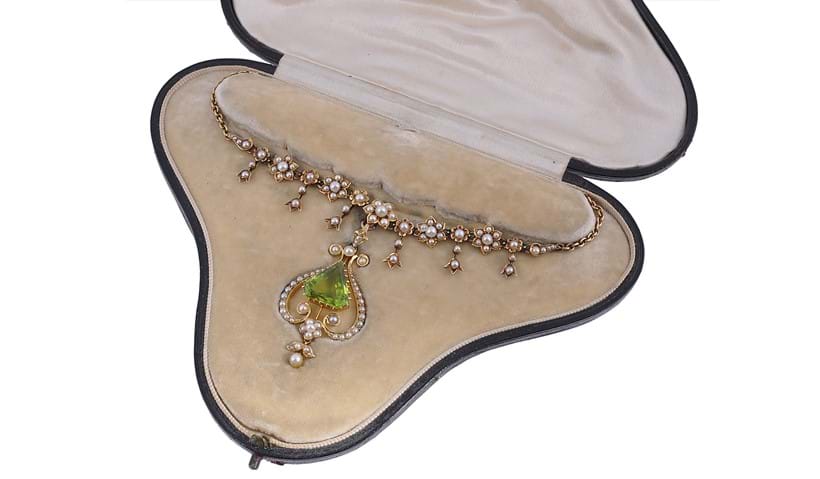 A number of very large peridots reside in some of the world’s most famous museum collections, including:

The largest cut peridot is in the Smithsonian Institute in Washington, D.C. and weighs 310 carats (62g)

The Smithsonian also has a 100.15 Trilliant cut peridot of the finest quality, which was mined in Pakistan.

The Natural History Museum in London has a magnificent superb quality 146.10 carat cut cornered square cut peridot in its collection.

A peridot weighing 192.6 carats, which formerly belonged to the Imperial Russian Romanov family, is now in the Diamond Fund in the Kremlin Armoury in Moscow.

What to Look for When Buying a Peridot 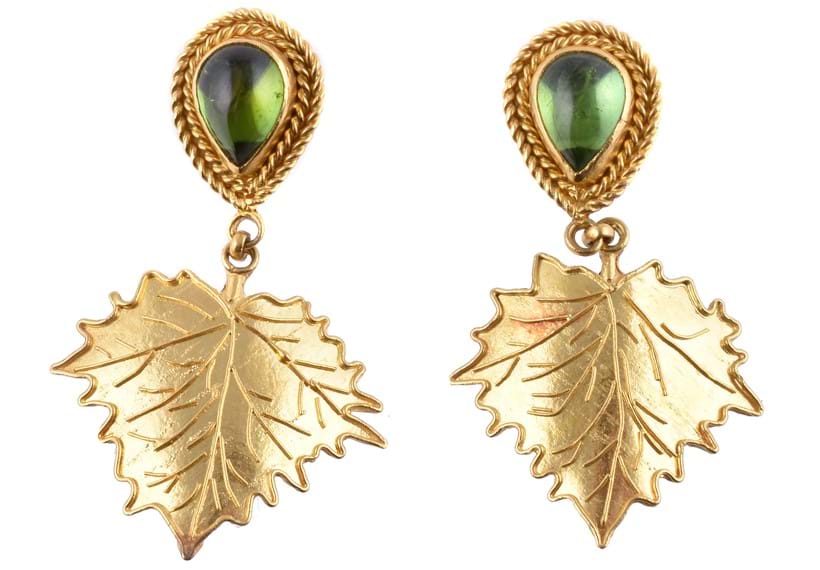 Peridot is not often found in large crystals above 5 carats, so stones of good colour weighing more than 10-15 carats are rare and highly sought after. The most important virtue of peridot is its colour. The intensity and tint of the green depends on the percentage of iron in the crystal structure. The depth and brightness of green colour is the major point to consider when buying a peridot. Bright yellow olivine gems are known as chrysolite when set into jewellery.

Peridots are usually internally quite clean and free from inclusions, although they can contain highly distinctive waterlily pad inclusions. The presence of these inclusions is a very useful means for a gemologist to identify peridot from other gems with which it is frequently confused.

Peridots are not amongst the most highly priced gems. A lovely gem quality example in a piece of Arts and Crafts or Edwardian jewellery, or a contemporary dress ring can be found for a reasonable price.

One word of caution - peridots are quite ‘soft’ in gemological terms, meaning they can scratch quite easily if left to rumble around in your jewellery box with other jewels. So, a little care is needed to look after them to ensure they retain a bright polish. 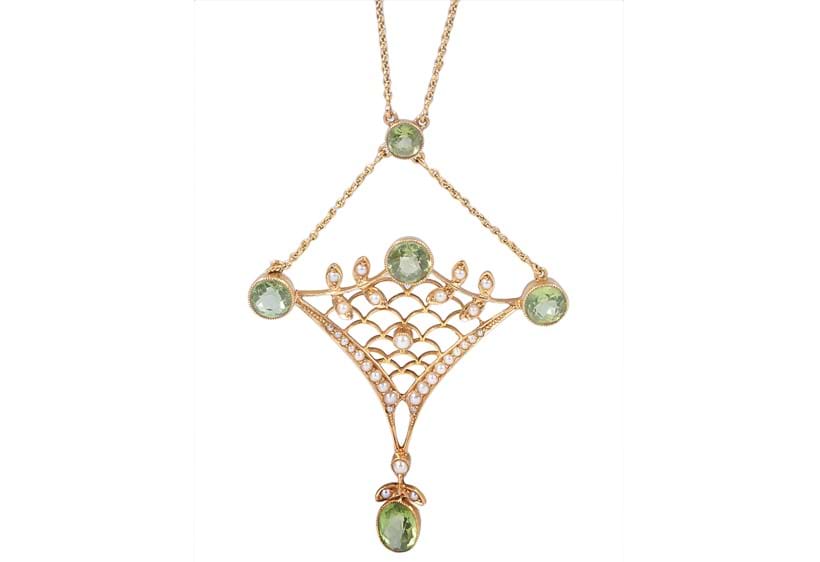 Have A Peridot Query? If you would like to find out more about your peridot jewellery, our Director of Jewellery, James Nicholson and his team would be delighted to hear from you.