Historic Houses is the country’s largest collection of independently owned historic houses and gardens. They work on behalf of more than a thousand important places, helping protect these places through representation and research, advice and guidance, and marketing and membership. In 2020, Historic Houses elected as their first female president, Martha Lytton-Cobbold. Here Martha talks of the importance of historic houses and their collections and why we should celebrate them.

As anyone who has strained their neck to see the Mona Lisa through a throng of selfie-ing crowds can attest, our appreciation of great works of art depends as much on the context in which they are displayed as on the genius of the piece under scrutiny. Today, formal curation of paintings in museums, for example, tends to ensure that each canvas is equally and uniformly lit, uncrowded by its neighbours, easy to see (when it isn’t the destination for a significant proportion of Parisian tourists), and interpreted with accompanying text telling the viewer who made it, when, and for what purpose, as well as what is depicted and why.

Britain’s lived-in country houses, though, offer visitors the chance to experience Old Masters, portraits, and classical landscapes in a setting and arrangement that conveys something much closer to the way these paintings were enjoyed by those who commissioned or collected them in the era of the Grand Tour.

Almost one and a half thousand of the most historic family homes in the UK – like my own, Knebworth in Hertfordshire – are part of Historic Houses, of which I am President. The association represents, supports, and advises owners and managers, helping them to keep their houses, gardens, and collections safe, for today and for future generations.

We also run a series of awards celebrating the incredible work our member places do to protect, and enhance, the nation’s heritage. Our long-established awards for gardens and restorations have more recently been joined by trophies for work to promote education and sustainability. This November, all four winners were recognised at our national AGM in central London, just before we heard from our keynote speaker, the 8th Earl of Leicester, about the incredible work he’s doing to care for the natural environment at his family’s seat of Holkham Hall in Norfolk.

In 2022, in partnership with Dreweatts, we’ll be adding another prize to our roster – The Collections Award. It will recognise the thought and effort that goes into caring for and interpreting the uniquely meaningful and precious contents of our privately owned and independently run historic houses. The heritage these special places embody is much more than bricks and mortar; artworks and artefacts, treasures and trinkets accumulated over generations and centuries which tell a huge range of stories that echo beyond the four walls that contain these fascinating assemblages. 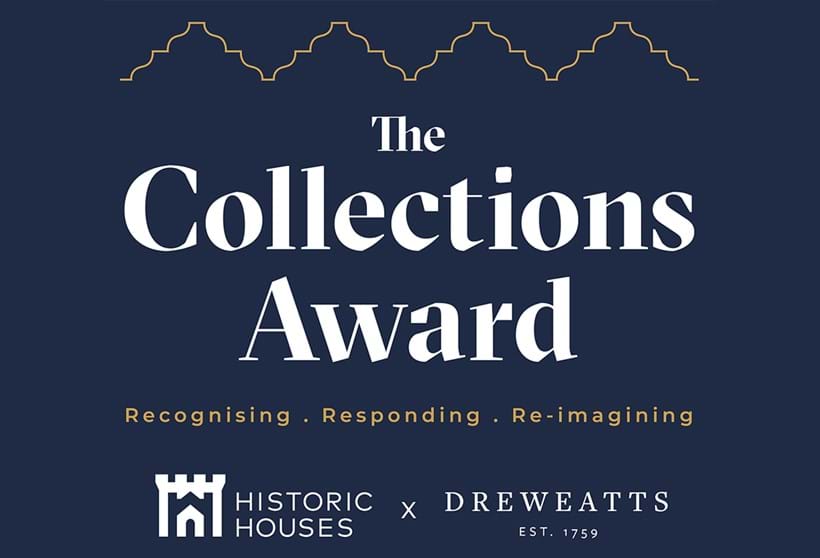 Will we see Lord Leicester back on the stage next year? Holkham’s Landscape Room is exemplary of that style of curation and display that historic houses embody and that makes them so different from museums. A pleasingly proportioned cube, its canvases are hung in the eighteenth-century manner, one above another. The room today, following a restoration by the present earl’s father, appears exactly as described in the inventory of 1760 drawn up after the death of Thomas Coke, 1st Earl of Leicester, who bought these pictures and commissioned the room to be decorated by William Kent. 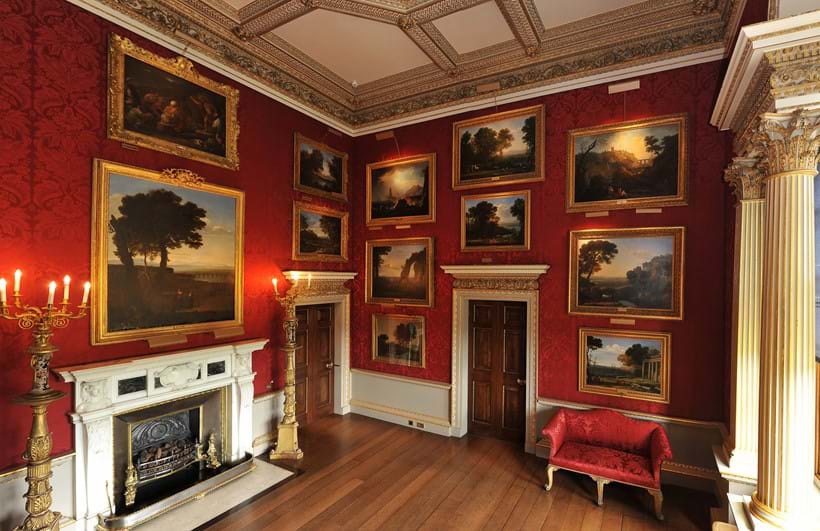 Thomas Coke (1697-1759) was unfortunate to lose both parents when he was just ten years old, but when dispatched on grand tour aged fifteen, he was fortunate to meet both Richard Boyle, Earl of Burlington, and the designer and architect William Kent, in Rome. By 1718, the friendship of these two taste makers of the era, and the discovery of classical works of art, Palladianism, and old masters, had transformed Coke from a teenager obsessed with cock fighting into a sophisticated man of culture. 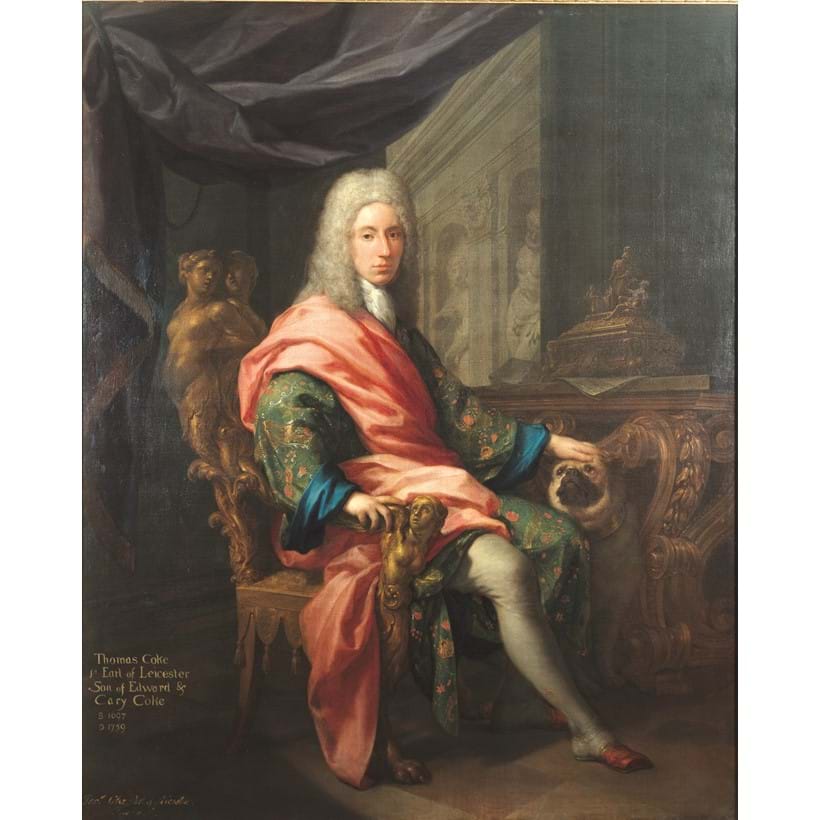 One of the tourist attractions of Rome was the Palazzo Colonna, home to the powerful family of patrons who gave it its name and their collection. The palazzo’s Hall of Landscapes inspired Thomas with the desire not only for a collection just like it, but a room in his own house dedicated to its display. He returned to Holkham with around fifty paintings, a collection of antique sculptures, and another of books and manuscripts. Among them were the core of the collection of landscapes which now can now be enjoyed in  the  Landscape Room. 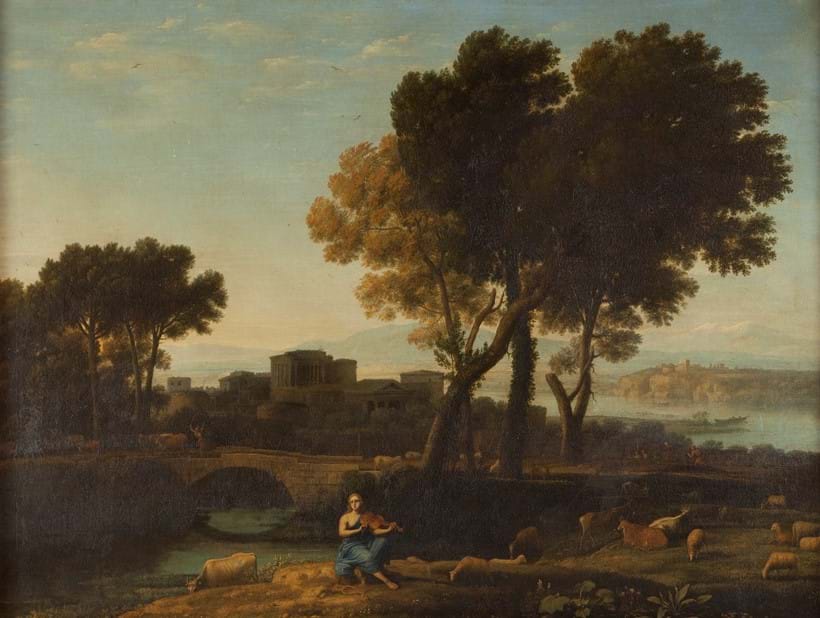 Coke chose to patronise the painters who were most popular at the time. As a result, Holkham now has the largest collection of paintings by Claude Lorrain outside the Louvre, including a series of nine drawings. Two of his works, at least, came home in Coke’s luggage in 1718 and Matthew Brettingham, son of the architect of Coke’s new house at Holkham, was commissioned to snap up two more in 1752 – Apollo guarding the Herds of Admetus and View of the Sea of Pola. When collector Humphry Edwin died Coke acquired The Origin of Coral and Argus Guarding Io, while his last purchase, at the end of his life, was Queen Esther approaching the Palace of Ahasuerus, bought from Alderman Beckford. 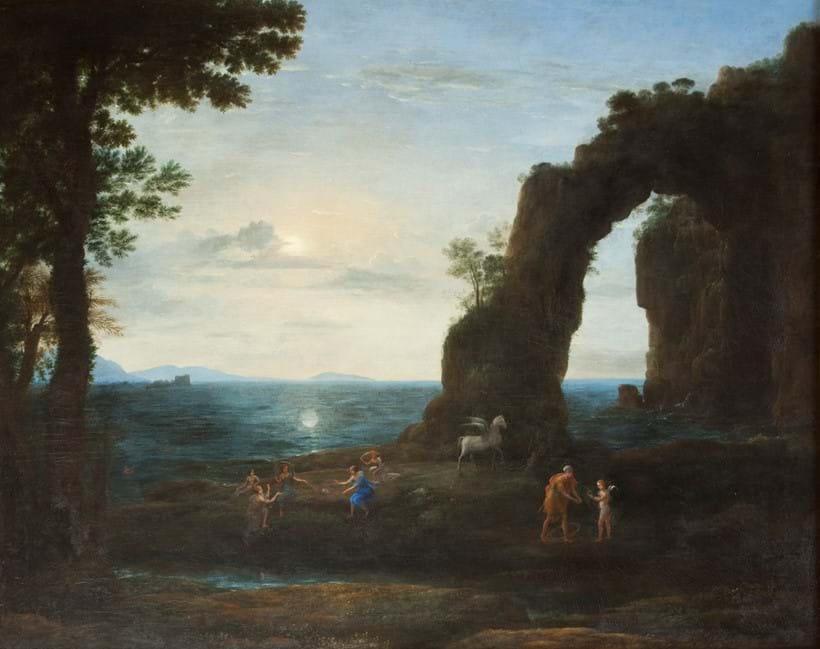 Claude Lorrain had pioneered a new way of working by going out into the countryside around Rome and taking sketches from nature from which narrative scenes were later worked up. These canvases established a style of landscape painting in which idealised settings emotionally dominate scenes from classical myth or the Bible. They were wildly popular with English grand tourists throughout the eighteenth century and came to influence a style of landscape painting that, a century later, would become recognised as distinctly English — particularly through artists such as Richard Wilson and J M W Turner. 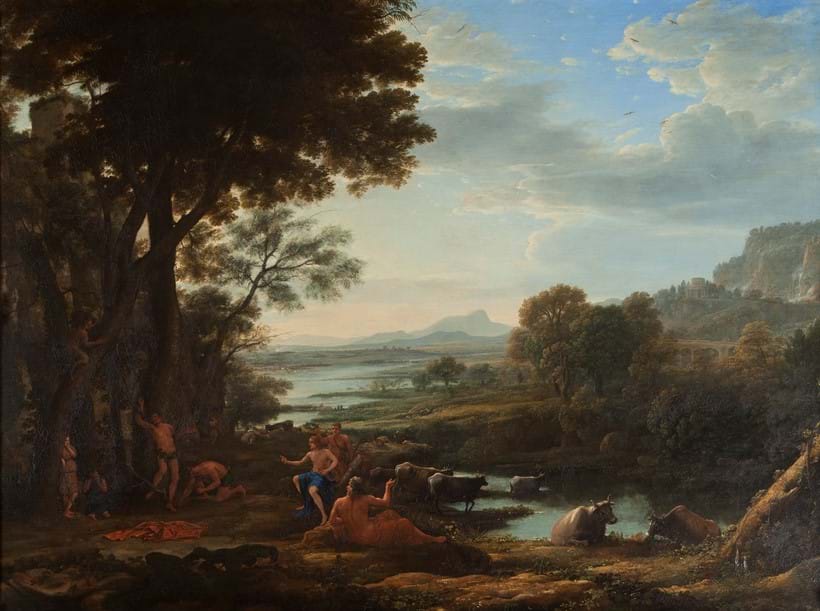 Matthew Brettingham’s shopping trip to Rome on Thomas Coke’s behalf in 1752 was largely inspired by Coke’s determination to purchase two canvases by Claude-Joseph Vernet for this room. Another painter of the French Baroque based in Rome, Vernet developed from a painter of whales into the finest early eighteenth-century proponent of the seascape, and another favourite of English grand tourists.

Italian painters are found in numbers here too. Most are what we expect landscapes to look like, although St John the Baptist Preaching by Luca Giordano was almost certainly included because John the Baptist was celebrated for preaching outdoors – a broader definition of landscape painting. Other works include those by Salvator Rosa, Andrea Locatelli, Giovanni Francesco Grimaldi, and Domenichino’s Abraham preparing to Sacrifice his son Isaac. Northern European works include two cityscapes by Vanvitelli, a Dutch landscape artist who was an important influence on Canaletto, and views of the Roman countryside by Jan Frans van Bloemen, nicknamed ‘Orizzonte’ for his grand horizons; both artists were living in Rome in the early eighteenth century. 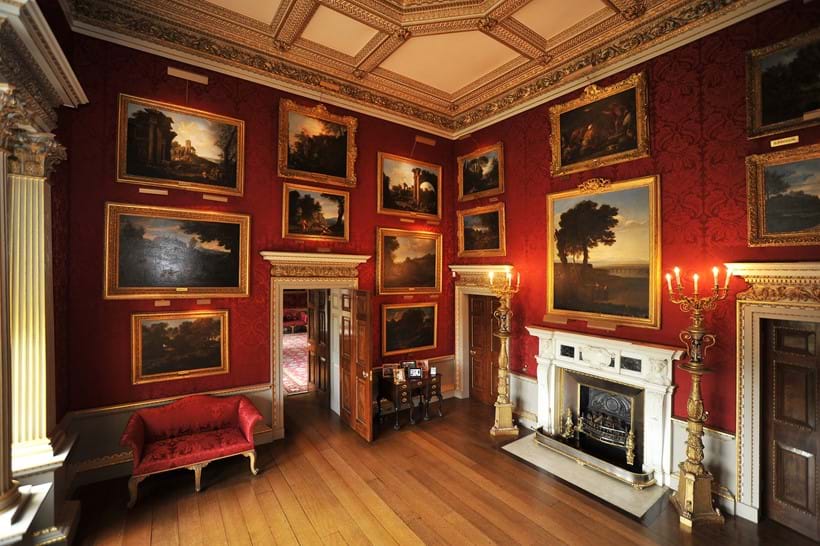 Claude Lorrain’s dreamy landscapes were an important influence on the Georgian landscape gardening movement. One of the pleasures of Holkham’s Landscape Room is that the view from the window gives you a glimpse of an idealised ‘painterly’ landscape realised in the English countryside. Thomas Coke conceived a new house as a showcase for his treasures in the latest Palladian style. Since it needed a setting, he and his designer, William Kent, set about creating a landscape for Holkham in the 1740s that owed at least a little to the verdant Arcadian settings of Claude Lorrain and his contemporaries- even though today the parkland is more a product of further improvements made by Capability Brown in the 1780s. 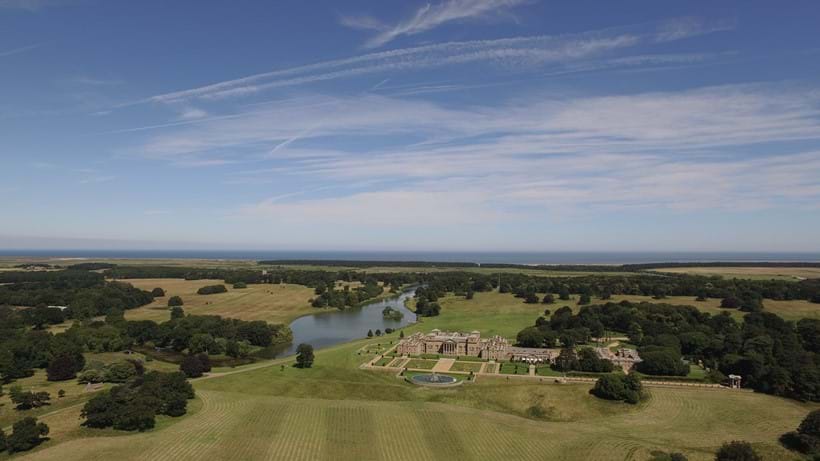 The Landscape Room, then, captures so much of what makes Britain’s great historic houses special, and worthy of support and protection. It is the deeply personal creation of an educated and travelled Georgian connoisseur. It allows us to step through the veil of time to experience his collection as a whole, in situ, exactly as he intended it to be enjoyed. It tells us how the legacy of classical culture shaped the attitudes and tastes of Britons of the eighteenth century, and in turn how they literally reshaped the world around them to imitate the perfect scenes created by artists. And it continues to be cared for by the descendants of its creator, even as they write a new chapter of the house’s story in response to the priorities and pressures of the twenty-first century. Who wins our inaugural award next year is in the hands of the our panel of expert judges, but with extraordinary gems like Holkham and hundreds of other places with stories just as fascinating and eligible to take part, they face a tough task.