Make your move at Dreweatts this December: Charlotte Schelling introduces a selection of chess sets from private properties in our Interiors sale on 11 December.

Christmas is nearly upon us, and as the season of mince pies and carols approaches, many of us will be dusting off the board games. If you are like me (not a strategic mastermind, and a particularly sore loser) chess might not be your game of choice, however there is nothing like a beautifully carved set of chessmen to tempt even the most reluctant players.

Dreweatts will present a selection of mainly 19th century chess sets from various private properties as part of our December Interiors auction. The English tradition of chess set manufacture is rich and diverse, and with the incredible variety in design there is a set to go on everybody’s wish list this December.

Throughout the nineteenth century, the ‘Barleycorn’ pattern was a popular choice. The ornate design, which owes its name to the pronounced husk or ‘barley ear’ patterns to the barrels, was usually made of bone and allowed turners and carvers to unleash their creativity. 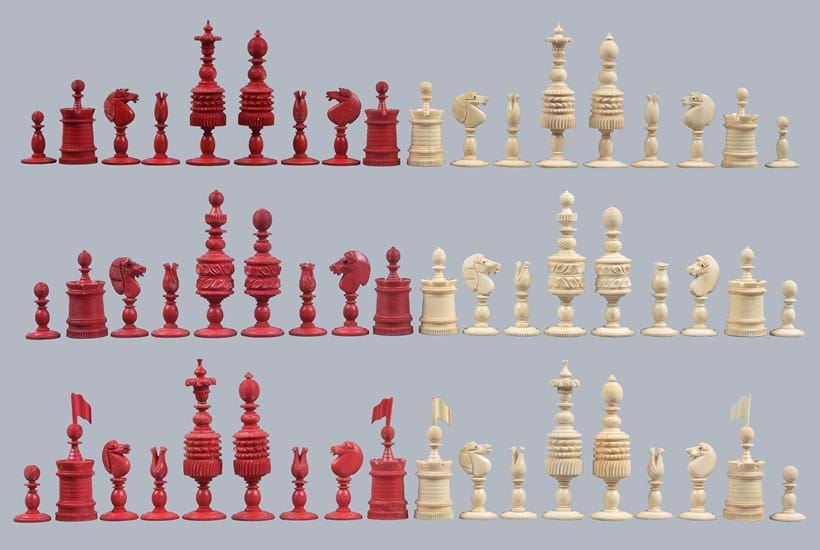 Lots 203, 204 and 205 in the upcoming Interiors sale are examples of this pattern. All display their respective makers’ individual design choices. Note for instance the difference in finials to the Kings. Where two of the sets show Kings with a foliate top and narrow finial, likely inspired by Indian designs, another maker has opted for a more stylised ball top.

Another well-represented style in the December auction is the ‘St George’ pattern, which is characterised by pieces comprising a series of discs to their stems. This design was the house pattern of London’s St George’s Chess Club, which gives the style its name.

Lot 206 is a fine example of a set of this kind, and the unusual Maltese cross finials could possibly indicate that the set was manufactured by William Lund of Fleet Street, one of the most desirable makers of the 19th century. The choice of precious ivory as opposed to bone also points to a high value commission. St George’s sets were produced in many different materials, including wood (see for example lot 207).

The Barleycorn and St George patterns thrived throughout the first half of the 19th century, until a more modern, streamlined design took the market by storm. In 1849, entrepreneur Nathaniel Cooke patented the ‘Staunton chessmen’: the pattern we still associate with the game of chess today (see for example lots 211-13). 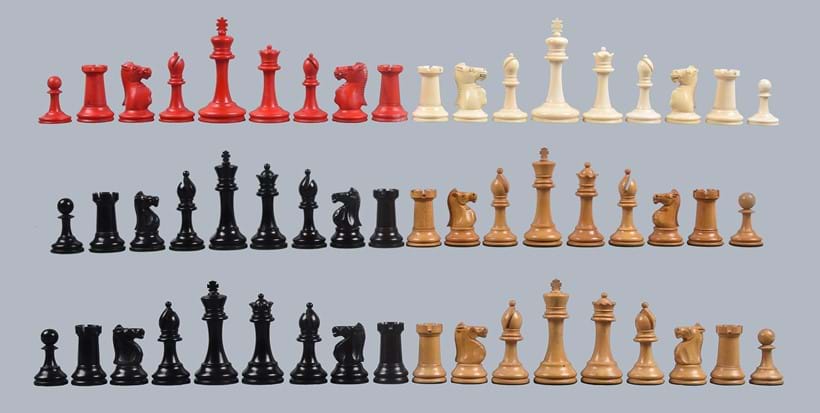 The chessmen were given their name and gravitas by Howard Staunton, a world famous British chess master who endorsed the design. The Staunton pattern is a classic for a reason: its elongated forms possess a timeless elegance, and the knights are said to have been inspired by the horses featured in the Elgin Marbles.

The Staunton chessmen were most famously produced by Jaques of London. The company was founded in 1795 by Thomas Jaques, a craftsman of Huguenot descent, and is still run by the same family today.

Lot 210, an ‘In Statu Quo’ chess set by Jaques, showcases the workshop’s innovative output. The folding board is fitted with tiny pegged pieces, and incorporates a locking mechanism, ensuring the pieces stay in place when you are playing on the go. 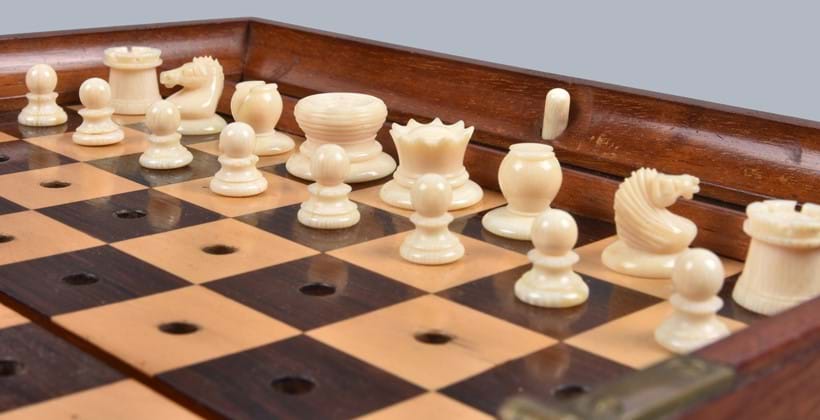 Which set would you like to find under the tree? Browse all the chess sets mentioned above, and more, alongside the usual eclectic mix of furniture, ceramics and works of art in our December Interiors catalogue.