Dreweatts is delighted to unveil a lost Easter tradition from the 17th century. The tradition carried out in Holland is encapsulated in a pair of oil works by revered Flemish artist Mathys Schoevaerdts (1665-1723), coming up for auction in our Old Master, British and European Art auction on Thursday 26 May. 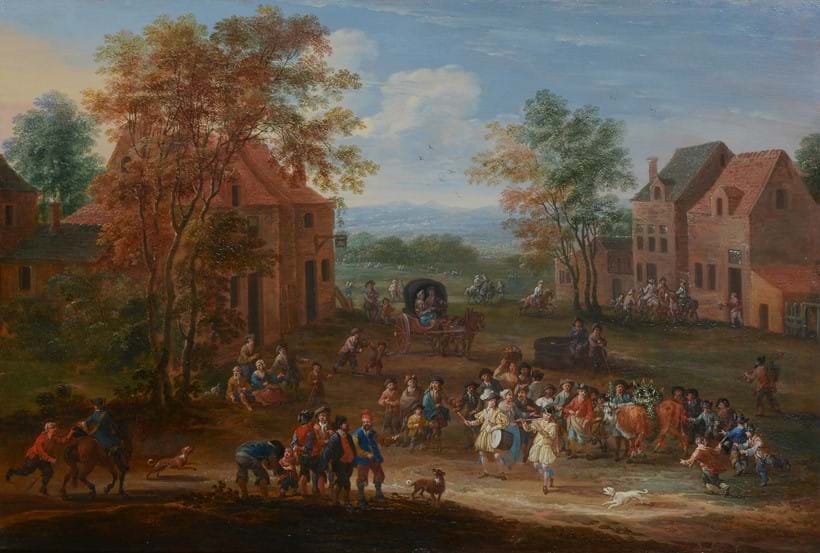 The scenes show the Dutch tradition of butchers parading their finest animals proudly through the streets, set to drum rolls, where the whole town would come out waving banners and to bet on the weight of the animals. The parade took place a week before Easter, on the day of the Guild’s patron saint, St. Luke, who was symbolized by the winged ox. It celebrated the guild’s most prized cow or bull, which was decorated with gilded horns topped with oranges, as well as ribbons and floral garlands.

The celebratory procession was led by pipers and drummers and followed by a chorus of singers and dancers, made up of guild members and townspeople. The celebrations would culminate in the animal being butchered and the meat served at a grand Guild dinner and a large portion of it being given out to the poor people of the town via the church. The phrase: ‘The guild ox is on parade’, derives from the tradition, meaning ‘this will be a real feast!’. The tradition continued well into the 20th century, but gradually disappeared after WWII, due to advent of increasing commercialism. Easter advertising moved inside the butcher’s shop, where their best-bred beef would be displayed on platters in shop windows and decorated with flowers and garlands of bacon. 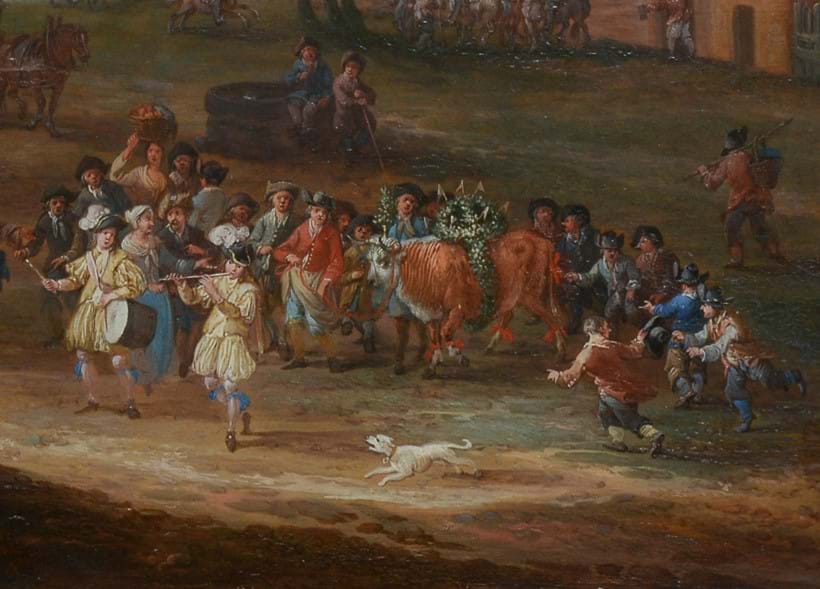 The two oil works depict depicting the scene are incredibly rare as only a few examples of 17th century paintings with the subject of the Easter Ox are known to exist. They were created by the great Flemish painter Mathys Schoevaerdts (1665-1723), whose landscapes are full of anecdotes and delicately painted scenes of peasants travelling, sailing or attending fairs, typically with small figures in detailed poses set against a backdrop of a pleasing landscape or buildings. 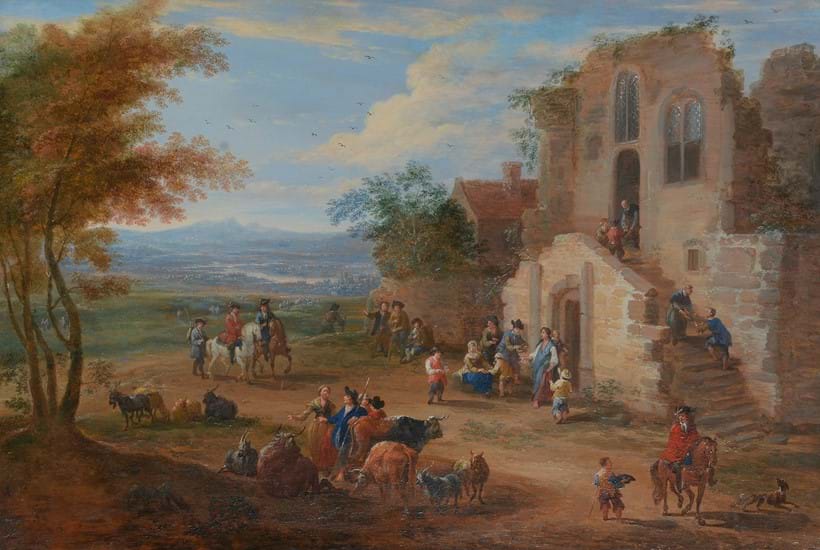 Schoevaerdts was a Flemish painter, draughtsman and printmaker who is believed to have been born in Brussels, where he trained with the landscape painter Adriaen Frans Boudewijns. His early works show the influence of the market views and other crowded scenes of Jan Brueghel the Elder, who started the tradition of landscape paintings with decorative scenes in the early 17th century.

Later he came under the influence of the Dutch and Flemish artists who worked in Rome known as the Bamboccianti, after which his landscapes also included backdrops of Italian ports and ruins as in one of the present works. His works are highly desirable and have achieved good prices at auction. That, coupled with the rare subject matter should attract a lot of interest at auction.