On Thursday 26 May, we have our auction of Old Master, British and European Art. The auction features a wide selection of works ranging from the 16th to the 19th century. A particular highlight is Lot 35, a portrait attributed to Joan Carlile, one of the earliest British female artists to work professionally in oil. 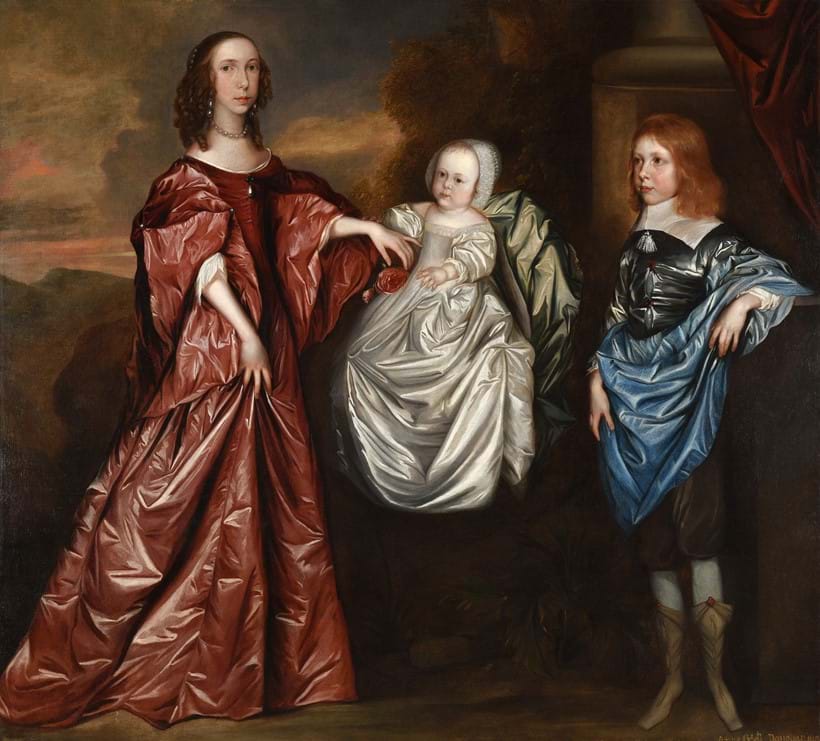 This ambitious large-format group portrait depicts three children of the aristocratic Wharton family - Anne (d. 1689), Philadelphia (1655-1722) and their brother Thomas Wharton (1648-1715), later 5th Lord Wharton. Their identification is based on the very distinctive inscription with which the 4th Lord Wharton had all portraits in his collection labelled.[1] The painting itself has a charmingly awkward style, redolent of the female artist Joan Carlile. The play of light and precise highlights on the silk folds of the children's clothing, and their delicately handled faces are typical of her work. Baby Philadelphia is flanked by her two elder siblings, and they are positioned in front of a classical column draped with a red velvet curtain, an extensive capriccio landscape behind. Their attire is fashionably courtly, with seven-year-old Thomas in blue satin doublet and breeches reminiscent of Van Dyck. Anne Wharton holds a small posy of roses in front of baby Philadelphia, an emblem of their youth, innocence and femininity. 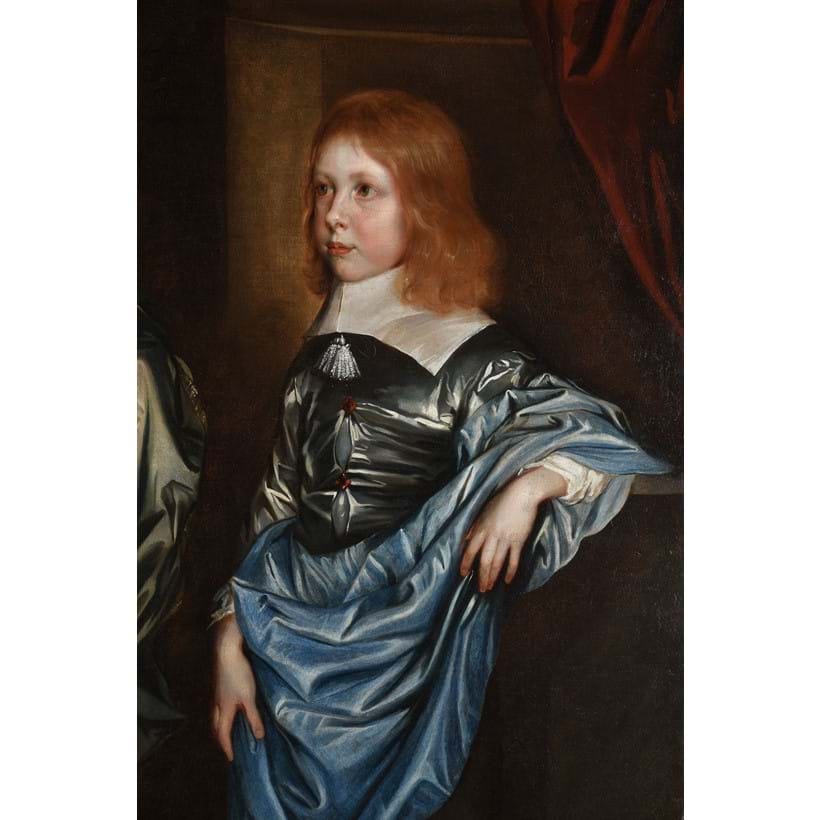 Philip, 4th Lord Wharton (1613-1696), was the son of Sir Thomas Wharton of Easby, Yorkshire, and Philadelphia Carey, daughter of the 1st Earl of Monmouth. On the death of his grandfather in 1625, Philip had inherited the baronetcy of Wharton as well as extensive estates in North Yorkshire which included profitable lead mines.

Through his second marriage in 1637 to Jane Goodwyn (1618-1658), the only daughter and heiress of Arthur Goodwyn, he acquired the additional estates of Wooburn and Upper Winchendon.[2] This combined wealth enabled Wharton to amass one of the largest and most renowned collections of art in England, built up over fifty years, spanning both the years of the Commonwealth and Restoration, with notable portraits by Sir Anthony van Dyck and Sir Peter Lely.[3] As the collection grew, Wharton commenced a major rebuilding of Wooburn Manor House, to include a long picture gallery for his collection of royal portraits.

Our painting is one of a series of portraits of the Wharton family painted by the same hand - a triple portrait of the sitters' father Philip, 4th Lord Wharton, with Lady Jane Wharton and their infant son Henry Wharton (Wycombe Museum, Buckinghamshire), as well as a set of four small oval portraits of Anne and three of her other siblings, Mary (1649-1699), Margaret (1646-1730), and Goodwin (1652-1704) (Southside House, Wimbledon), of which the small version of Anne Wharton is virtually a mirror image of ours. Assuming they are all the work of Joan Carlile, it would have been an important commission for the artist. 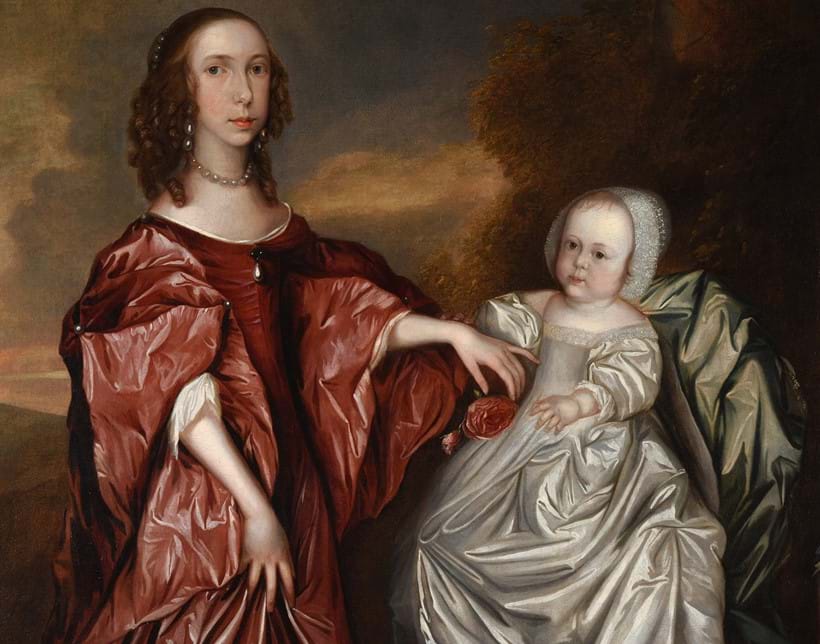 Portraits by Joan Carlile are rare and of her corpus there are approximately only ten that have been identified with certainty. Of these, three are in public collections (Tate Britain, Ham House, Surrey, and The National Portrait Gallery, London), while others are held in historic house collections, for example Lamport Hall, Burghley House and Berkeley Castle. Carlile is known to have specialised in small-scale portraits of figures, usually female, set in large landscape or garden settings. The larger format employed here, represents an important addition to an understanding of her oeuvre and capabilities.

Joan Carlile was married to Lodowick Carlile (or Carlell), a minor poet and dramatist who also held the office of Gentleman of the Bows to Charles I, and she lived with her husband in Petersham, a suburb of south-west London. However, by 1653 their neighbour, Brian Duppa, recorded that 'the Mistress of the Family intends for London, where she meanes to make use of her skill to som more Advantage then hitherto she hath don'.[4] In 1654, shortly before the approximate date of the present portrait, Carlile is recorded as living in London's Covent Garden, then the heart of London's artistic community. It was here that she presumably set up her own professional studio.

[3] In 1713 Arnold Houbraken recorded seeing the van Dycks in the gallery at Upper Winchendon. See O. Millar, Philip, Lord Wharton, and his collection of portraits,The Burlington Magazine, vol. I, 1997, pp. 517 - 530.