At the end of the month we have our Works on Paper from the Islamic and Near Eastern Worlds auction on 30 October. The sale features an impressive range of items. Ahead of the auction, Head of Islamic Manuscripts and Miniatures, Roxana Kashani picks out some of the highlights.

Lot 40 is a beautifully decorated manuscript on paper. This is a monumentally important Qur'an copied for Sheikh Khalifa bin Shakhbut of the Beni Yas tribal confederation and ruler of Abu Dhabi from 1833-1845. He was later succeeded by Sheikh Zayed bin Khalifa al-Nahyan (1835-1909), known as Zayed the Great, who in turn was the grandfather and namesake of Sheikh Zayed bin Sultan (1918-2004), the 'founding father' responsible for the formation of the United Arab Emirates. The detailed colophon stipulates that the volume was copied in the month of Ramadan 1225 AH (1810 AD), "in the hand of" Rashid bin Nasser bin Sa'id al-Maliki in "Ain al-Wahat", which translates to the Oasis of Ain (the spring). This certainly refers to the modern city of Al-Ain located on the eastern border of the U.A.E. with Oman. Al-Ain is the largest inland city of the Emirates and has long been recognized for its natural oasis and greenery, giving the city its nickname al-Madinat al-Hadiqat (the Garden City). The colophon continues with the name of the patron, Sheikh Khalifa bin Shakhbut and specifies that they are from the Beni Yas tribe "Sheikh Qabila Beni Yas" in the province of Oman. This region would have fallen under Omani territories in the early nineteenth century. To have the Beni Yas name associated with Oman is exceptionally rare and marks an important and relatively undocumented point in the history of the state of Abu Dhabi.

Although Sheikh Khalifa bin Shakhbut had not officially become the ruler of Abu Dhabi at the time of the copying, he was one of three crown princes and sons of Shakhbut bin Dhiyab al-Nahyan, who reigned from 1793 to 1816, probably overseeing the region of Al-Ain (in the emirate of Abu Dhabi) on behalf of his father.

Book of Cycles, a treatise on the theory of music

Carrying on through the sale we have Lot 51, an illuminated manuscript on paper in Ottoman Turkish by the author al-Urmawi (d. 1294). It is the Kitab al-Adwar or Book of Cycles, a treatise on the theory of music. This treatise is, perhaps, the earliest known text dedicated entirely to the theory and practice of music in the medieval Islamic world.

It was compiled in the thirteenth century, and explores musical divisions, scales, modes and also describes the workings of practical instruments including the five string lute. The treatise offers a scientific explanation to these theories and is comparable in style to the teachings of Avicenna on the same subject, which described music as a mathematical science in his Danishnama'i Ala'i (a treatise on logic, metaphysics, music theory and other sciences).

Little is known about the author's early life, but he is thought to have been born in Urmina, given his surname, in the modern-day Azari region of north-west Iran in the year 1216 AD. He travelled to Baghdad in his early life where his skills in calligraphy granted him the role of copyist in the famous library of al-Musta'sim of the Abbasid caliphate (the final Abbasid Caliph, d. 1258 AD). Towards the end of al-Musta'sim's reign al-Urmawi had become a famous musician and thus survived the fall of the Abbasid caliphate, and was supported through the patronage of private families including influential Juvayni family.

The Kitab al-Adwar is one of two notable musical treatises compiled by the author during his lifetime. The second of which is the Risalah al-Sharafiyyah fi l'nisbah al-ta'lifiyyah, compiled around 665 AH (1267 AD) and dedicated to his patron in later life Sharaf al-Din Harun Juvayni, focusing on musical intervals. These works have remained integral to the study of music in the Islamic world and have been used consistently since the thirteenth century.

We now look at Lot 72, a decorated manuscript on paper in Farsi called Nuhzat al-Qulub or The Pleasure of Hearts by Hamdullah Mustawfi al-Qazvini, a Persian poet, historian and geographer. Hamdullah Mustawfi al-Qazvini (d. 1339 AD) took on an official role as the regional vizier for Ilkhanate Qazvin in the early fourteenth century before the Mongol invasion. He compiled three major works of prose and poetry during his lifetime: the first was Tarikh-i Guzida, a history of the world including the life of the prophets and pre-Islamic Kings, then came the Zafarnameh, a poetic work acting as a continuation of Firdowsi's Shahnameh taking the timeline right to the Ilkhanid era, and finally he wrote the Nuhzah at-Qulub, a geographical and historical treatise documenting the affairs and workings of the Ilkhanid Empire.

The Nuhzat al-Qulub was al-Qazvini's most influential work because it provided invaluable statistical and geographical information about Persia and Mesopotamia under Ilkhanid rule, and documented important political events leading up to the Mongol invasion.

There are two large double-page maps present in this work. The first is a detailed geographical study of thirteenth-century Persia and its surrounding territories, including the Arabian Peninsular, Central Asia and India. The second is a depiction of a globe taken from earlier sources, which is centred upon Mecca. Both of these maps use the grid form endorsing latitudinal and longitudinal lines in an attempt to position the relevant cities in their exact geographical locations to one another.

A Celestial Globe, engraved in brass by "Iskandrani"

Another interesting piece we have is Lot 73, a Celestial Globe, engraved in brass by "Iskandrani", depicting zodiac signs and stellar constellations, dated 1128 AH (1716 AD). 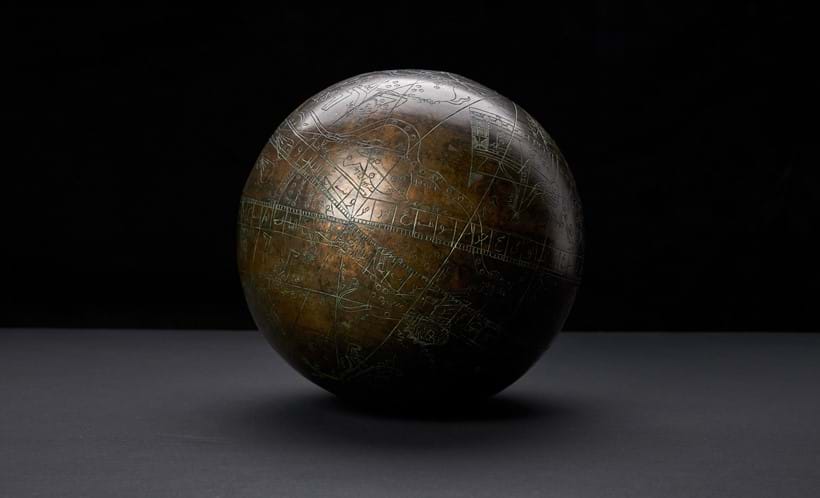 Celestial globes of this nature were used by astrologers, astronomers, Islamic scholars and scientists alike. They were popularised in the Timurid period by patrons who extended their support for the arts into the sciences as well, and fine examples of these scientific and astrological instruments including astrolabes and other astrological globes from this period are predominantly from the Eastern Ilkhanate regions of Samarkand and Herat. Celestial globes of this nature portray stars and constellations as if viewed from above, and were often used as astronomical instruments to guide the viewer and serve as a map of the heavens. The exact proportions and presence of lines also gave these objects a religious purpose as they could be used to tell prayer times and also establish the location of Mecca.

Finally, to end the auction we have Lot 107, a large Pichwai-style painting on linen for use as a wall hanging. Showcasing very vivid colours in gouache and ink, it depicts two tigers peering out from dense jungle foliage, with a lake in the foreground and spiralling pink flowers towering above on the skyline. 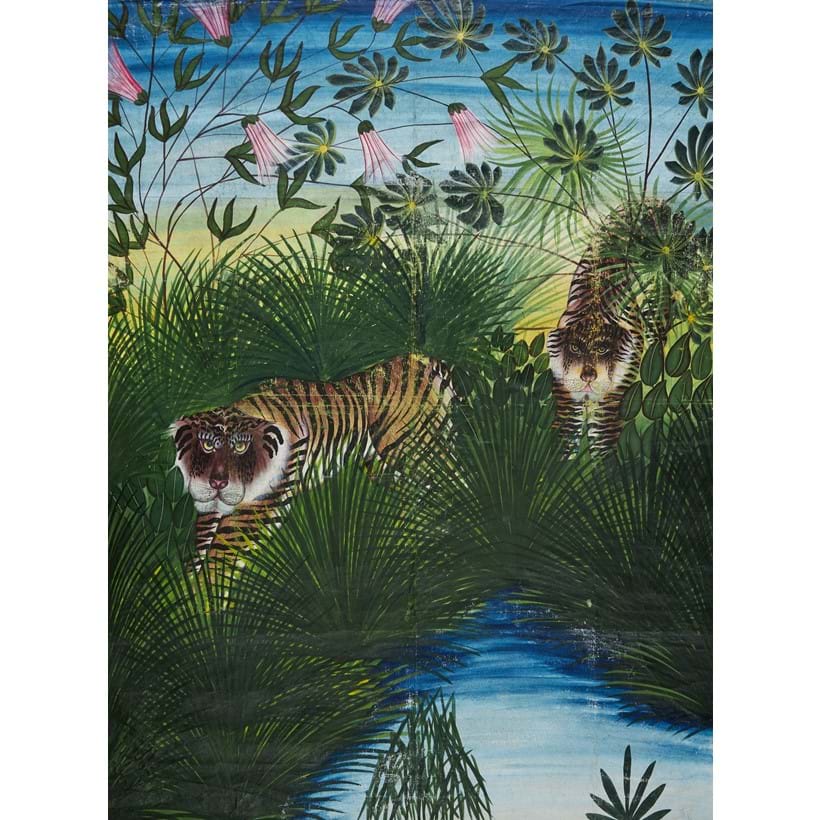 Paintings of this nature on linen were often used to adorn walls of palaces, temples and private residences. They were often devotional in nature and depicted Hindu deities. However, the present example was likely commissioned to commemorate a hunting expedition and portrays the allure and mystery of tigers in their natural habitat.