On Monday 7 December we have our Western Manuscripts and Miniatures auction. Ahead of the auction we pick out just a few of the highlights.

Leaf from a finely illuminated Book of Hours, in Latin, manuscript on parchment

From fifteenth century England, we have Lot 17, a leaf from a finely illuminated Book of Hours, in Latin. This manuscript on parchment is beautifully decorated with a large initial 'D' in blue with white penwork. It encloses fleshy and bulbous acanthus leaves on burnished gold grounds. A further acanthus leaf is finished in coloured foliage and gold bezants. One can also see a tiny dog's face poking out its tongue in the initial letter of the word 'Deus'. 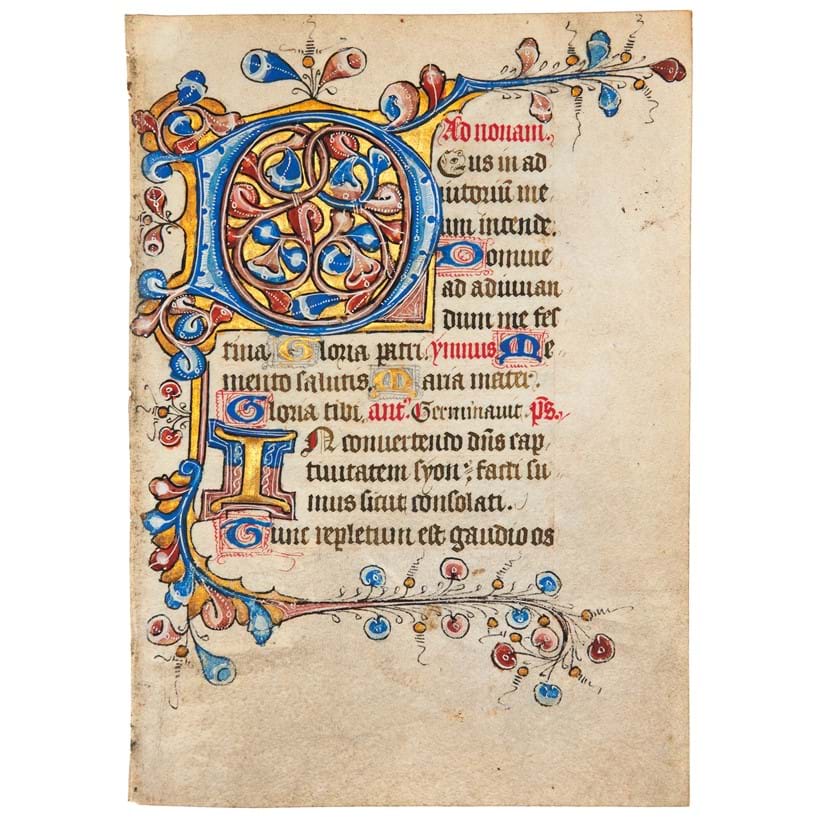 The simplicity of the decoration here, with mirrored leaves above and below simple foliage strands, shaded with heavy white strokes, points to English illumination in the opening decades of the fifteenth century. The trumpet-like flowers and curled leaves decorated with lines of tiny white dots indicate a date in the 1410s or 1420s.

Continuing through the sale we have Lot 57, Homilies by Antonius Azaro de Parma, a decorated manuscript on paper in Latin. This is a large collection of some 95 Sunday and Lenten sermons in a manuscript with a precise date and provenance in the fourteenth century, in a fine medieval binding; the whole is in an outstanding state of preservation. 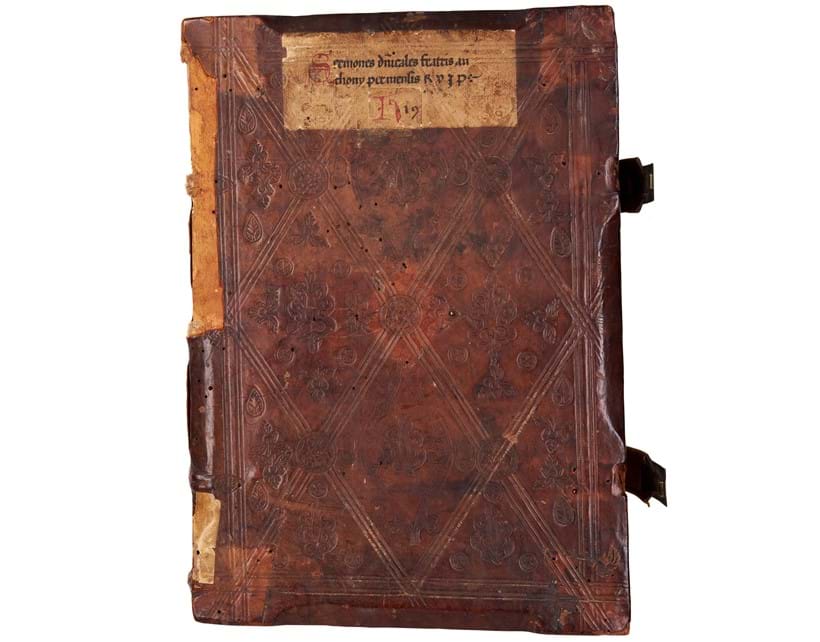 Antonius Azaro de Parma reached fame in the late thirteenth and early fourteenth century as a Dominican preacher with a flair for simple and clear sermons expounding Peter Comestor's 'Historia Scholastica'. The first solid record of his works is a note of a copy of his sermons in the convent of San Domenico in Bologna in 1381 (that copy now Bologna, Archiginnasio, A.216), and a small number of extant manuscripts survive from the late fourteenth and fifteenth centuries.

This is a fine monastic copy of two rare works in manuscript by an important and understudied author. Werner Rolevinck (1425-1502) was a native of Westphalia, who was educated at Cologne and in 1447 entered the Carthusian cloister of St. Barbara in that city. Abbot Trithemius who visited him there in about 1495 speaks of an 'extraordinarily diligent and prolific author' of thirty or more works on theology and sacred history. However, with the exception of his Fasciculus Temporum (a manuscript copy of which, ex Ritman collection, was sold in June 2012 by PBA Galleries, San Francisco, for $102,000), few of his works are known in anything other than print copies, and they are notably rare on the market. 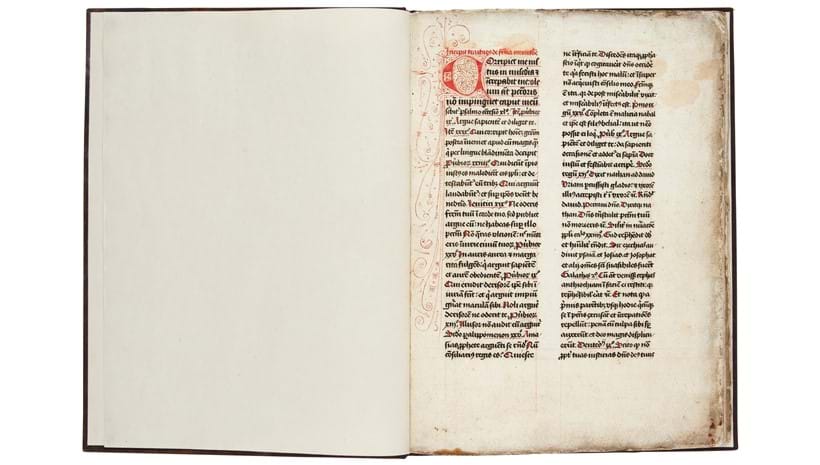 On first inspection, this book resembles the earliest printings of the two works (1477 and 1475, respectively, by Arnold ter Hoernen in Cologne) in layout, penwork decoration and script, so closely that one could be forgiven for dismissing it as a copy of those printings. However, the watermark indicates a probable date before them, and it stands apart from the print copies in not repeating orthographic errors in those, and having different abbreviation patterns. Instead, it is more probably a copy produced within a monastic community, under the supervision of the author, in an attempt to disseminate the work in large numbers of carefully corrected copies to other related monastic communities, with such efforts being overtaken by the arrival of printing some years later. The same scribes, correctors and rubricators may well have worked on both manuscript and then print copies. If correct, then this copy is of some importance as having the name of one of the book producers involved, and it may yet have its part to play in the history of book production in Cologne in this crucial period when print had not yet dominated the market.

Towards the end of the auction we have an impressive work, Lot 64, Historia della presa di Tripoli by Battistino de Tonsis. This is an Italian illuminated manuscript on parchment, with Latin and Italian verses addressed to the author and the dedicatee Gerolamo Adorno, dated 20 October 1510.

It is the sole recorded manuscript witness to this unedited and unstudied text, giving a lengthy eye-witness account of the Spanish conquest of Muslim Tripoli in 1510. This is the author's presentation copy to his patron. 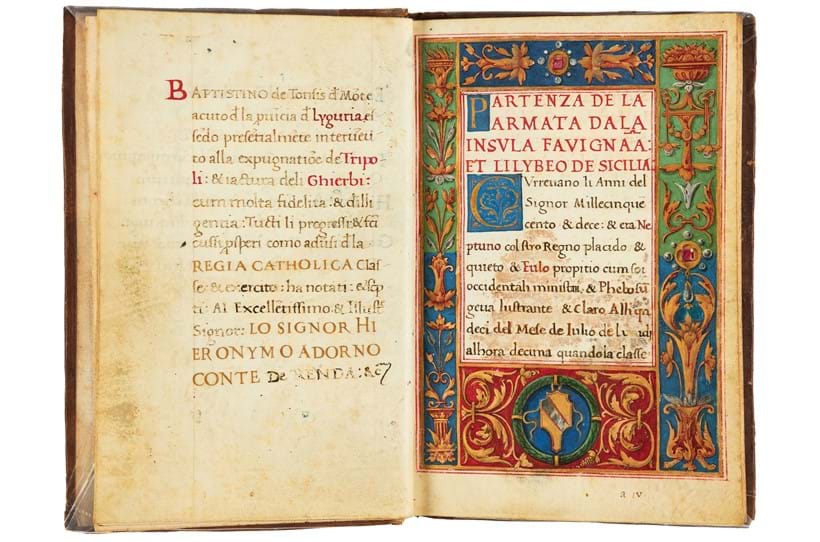 The main text here is an eye-witness account of the invasion of Muslim Tripoli by a Spanish-Genoese fleet under the command of Don Pedro Navarro (c. 1460-1528), count of Oliveto. This was a key part of an ongoing struggle throughout the sixteenth century between the Hapsburgs of Spain and the Ottoman Empire and their allies (here the Berber Hafsid rulers who controlled Tripoli, backed by the sea-power of Barbary pirates), for control of the rich trade routes between Libya and southern Europe. The narrative begins here with the departure of the Spanish and Genoese from the island of Favignana near Sicily, and onwards to Melita (Mdina on Malta) and the city of Tripoli. Some detail is given on the weather conditions, and once the narrative reaches Libya itself, on the form of the initial assault on the citadel and the city of Tripoli with cannon and 'bombarde' and the forces of Galleazzo Guistiniani of Genoa. The author notes that the Muslim inhabitants withdrew to the citadel, the "Moscheta maiore, id est Ecclesia" ('Grand Mosque, that is [their] church') and some towers, from where they continued to fight. After the fall of the city most of the citizens, including elderly men and women, children and young girls of noble birth gathered in the Grand Mosque, where they were massacred by the invaders. The invaders then moved on to the citadel, where "il signoranzi Tiranno chiamato" ('the lord [who was] called Tiranno') was imprisoned, explaining that "in quel linguagio" ('in their language') he was called "Sieche" (an Italian attempt to spell 'sheikh'), along with his wives and children. To the best of our knowledge, this is the only source to name the ruler of Tripoli at this time. There then follows an account of the pre-existing problems between this ruler and "Re de Tunesi" ('king of Tunisia'). Following the account of the invasion, there is a geographical account of the city of Tripoli, noting it was protected on three sides with a double wall and a moat, the remaining side open to the sea with mooring for 400 ships, and that during the assault it was these defences that trapped the population, and the only escapees did so through a weak point in the walls in the Jewish quarter. A section on the geography of the neighbouring regions follows, partly drawn from Western sources. From here the narrative turns to the failed attempt to capture the island of Djerba. It ends with the leaving of Tripoli under the command of two generals, named Samaniego and Palumbino, and an account of the return of the navy to Naples, where this account was written.