On Wednesday 6 July, we have our Western Manuscripts and Miniatures auction. Comprising over 130 lots, here we take a look at some of the highlights. 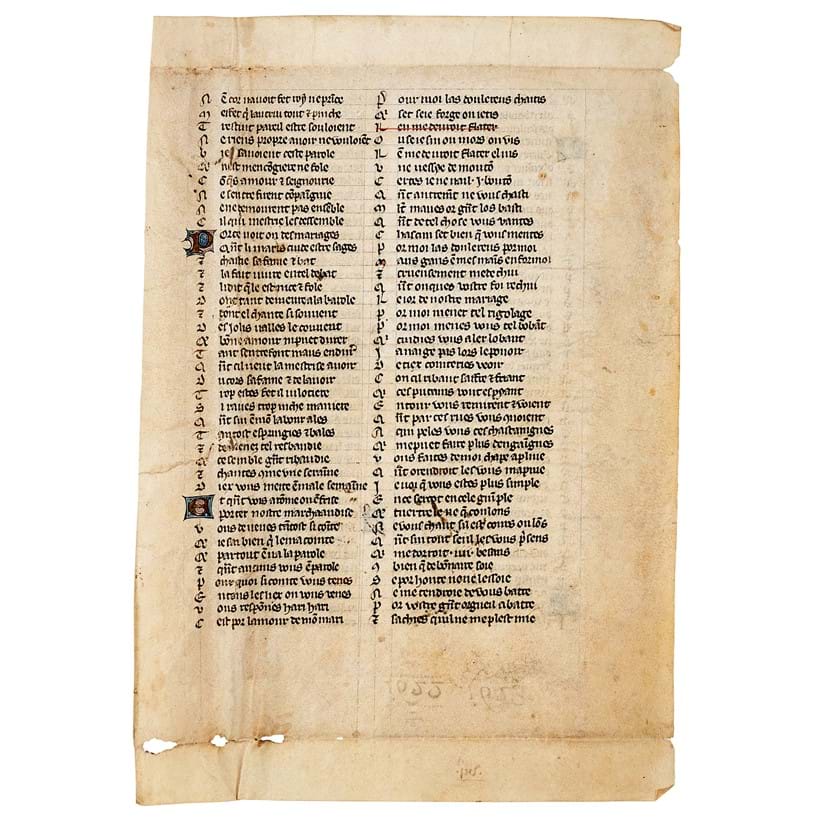 These are exceptionally early witnesses to this most important literary text, the most popular secular work of the entire Middle Ages, exceeding both Chaucer and Dante in the production and circulation of manuscripts. It is of fundamental importance for the history of French literature and is the first example in French of a sustained first-person narrative and a narrative allegory.

The poem was begun c. 1240 by Guillaume de Lorris (d. c. 1278) who wrote the first 4058 lines, telling the reader all that he knew of love. The poem describes a dream in which Amant is taken by Oiseuse into a pleasure garden where he meets the allegorical figures of Pleasure, Delight, Cupid and others, finally catching sight of and falling in love with the Rose-in-bud. He is held back by the figures of Danger, Shame, Scandal and Jealousy who imprison the Rose in a castle. Thus far the tale is a rather innocent one of love in the abstract, however, some forty years later, another author, Jean de Meun (a friend of Dante) added another 17,724 lines (including the lines on the present leaves). These fundamentally changed its tone to a biting satire on contemporary society. His lover-hero makes war on the castle, debates with Reason, Nature and Genius, and finally enters the inner chamber of the Rose. His advice to the lover includes sections on how a man should keep his mistress (study the arts, ignore any infidelities, offer flattery but never advice) and how a lady might keep her male lover (use false hair, make up and perfume, avoid getting so drunk you fall asleep at dinner, only have intercourse in the dark to hide imperfections of the body, and avoid poor men and foreigners - except very rich ones).

Another lovely item is Lot 119, a thirteenth century Bible, most probably of English origin. It has a long and noble history of ownership, and has been unseen on the open market since 1844. 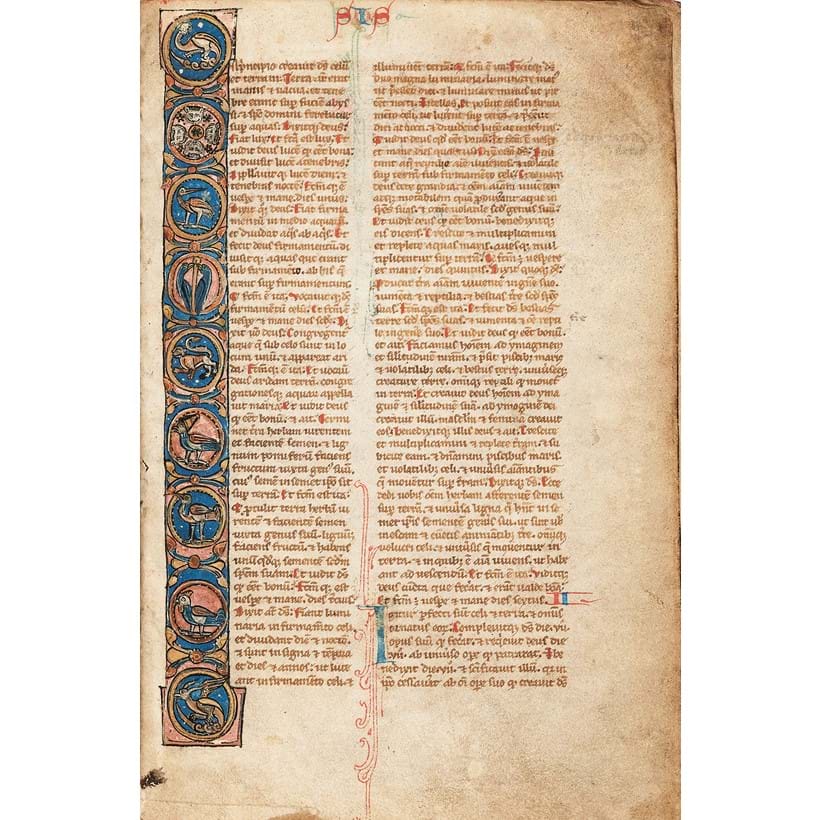 A number of the hands here, the simple decoration (avoiding gold and with penwork in dull red and blue penwork) and the gaps left before the beginning of Mark's Gospel and the Interpretation of Hebrew Names, all indicate that this volume was copied and decorated in a university setting in England, almost certainly Oxford, for use by a student or master there. It remained in use in England through to the close of the Middle Ages, and perhaps beyond, with hands of the thirteenth to the fifteenth century (some certainly English) adding notes for its liturgical use on endleaves and a list of Hebrew names with short descriptions added before the Interpretation of Hebrew names.

This charming Bible was given by Bishop Robert Carr of Chichester to Prince Augustus Frederick, the sixth son of George III on Christmas Eve in 1830. English thirteenth-century Bibles are far rarer than their French cousins, and come to the open market much less frequently.

To start the auction, we will be offering Lot 1, three fragments from an exceptionally early manuscript of Paul the Deacon's Homiliary. This text is one of the fundamental building blocks of the Carolingian renaissance, as important as the Tours Bible or the Carolingian Glossed Psalter, and these leaves offered here are the earliest recorded examples, perhaps written during the lifetime of the author and almost certainly within the lifetime of Charlemagne. 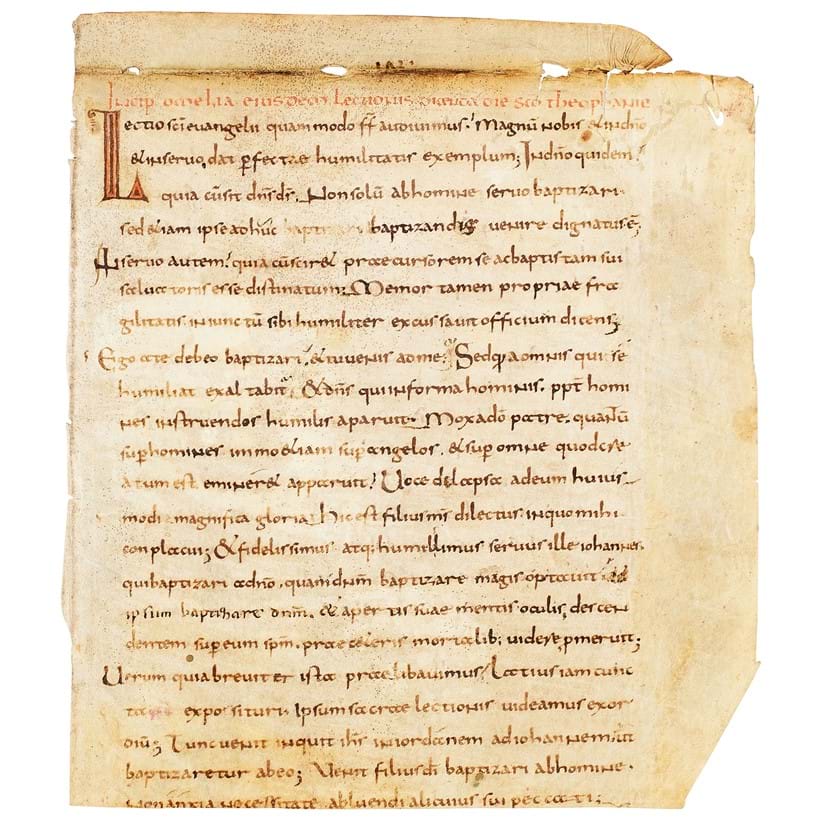 The Homiliary of Paul the Deacon (c. 720-99; also known as Paul Warnefrid) formed an important part of the revival of Christian learning under Charlemagne from the 780s onwards. This 'renovatio' was a process driven by books and reading, and thus careful correction and compilation was needed to enable the European populace to correctly follow the Christian path. The Admonitio generalis of 789 called for the careful correction of the Psalms, the songs, the Calendar and the Catholic books, 'because often some desire to pray to God properly, but they pray badly because of faulty books', and the Bible came into a stable form under Alcuin in Tours and was disseminated from there with the support and backing of the Carolingian court. However, while these were correction campaigns, the work of Paul the Deacon was different and far greater in scope - an attempt to compile a homiliary that would replace the clutter of previous efforts (for comment on these see our sale, 7 December 2021, Lot 14). Its scope was grand and stemmed from Charlemagne himself, who commended Paul in a letter for the task of having 'read through the treatises and sermons of the various Catholic Fathers, culled all the best things and offered us two volumes of readings, suitable for each separate festival throughout the whole course of the year and free from errors'. It was of fundamental importance to the Carolingian renaissance, and remained so for much of the Middle Ages.

Finally, we wanted to take a look at Lot 123, a fascinating medical compendium with substantial parts of Egidius de Corbeil, De urinis, to which was added much of the Fasciculus medicinae attributed to 'Johannes de Ketham'. 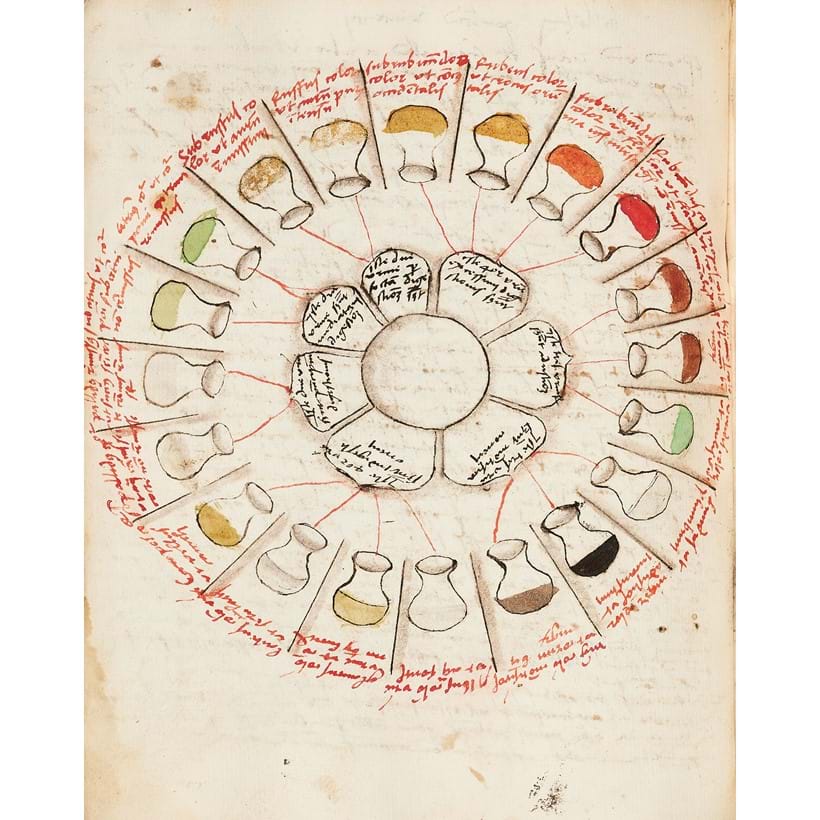 Lot 123: Ɵ Medical compendium with substantial parts of Egidius de Corbeil, De urinis, to which was added much of the Fasciculus medicinae attributed to 'Johannes de Ketham', with his diagrams of the human body and the chart to compare the colour of patients' urine, in Latin, illustrated manuscript on paper [Italy, mid-fifteenth century and 1500 or years immediately following (before 1509)] | Est. £25,000-35,000 (+ fees)

The earlier manuscript unit here contains substantial sections of the De urinis of the French royal physician, Egidius de Corbeil (died in first quarter of thirteenth century). The text was an adaptation of the seventh-century Greek medical scholar, Theophilus Protspatharius, via the Articella. The earliest versions are in verse, but that here is in the later prose form.

To this has been added treatises on the colour of urine and its use in diagnosis (original fols. 261v-64r), on the various illnesses of the body arranged alphabetically (fols. 264v-71v), on the most advantageous parts of the body for bloodletting (fols. 212r-90r) and on grievous injuries and surgeries to treat them (fols. 290v-300r), each with their diagrams, all copied from the Fasciculus medicinae. This work was printed first in Venice in 1491, drawing together these independent medieval medical treatises (as well as one on gynecology ignored by our copyist) and publishing them under the name of a former owner of the collection: Johannes de Ketham. The text was popular, and was reissued in 1493, this time with a frontispiece suggesting that the works were composed by one Petrus de Montagnana, who like Ketham has proved impossible to locate and is probably fictitious. It was issued again in 1495, 1500 and 1513, with Italian translations in 1493, 1509 and 1522. 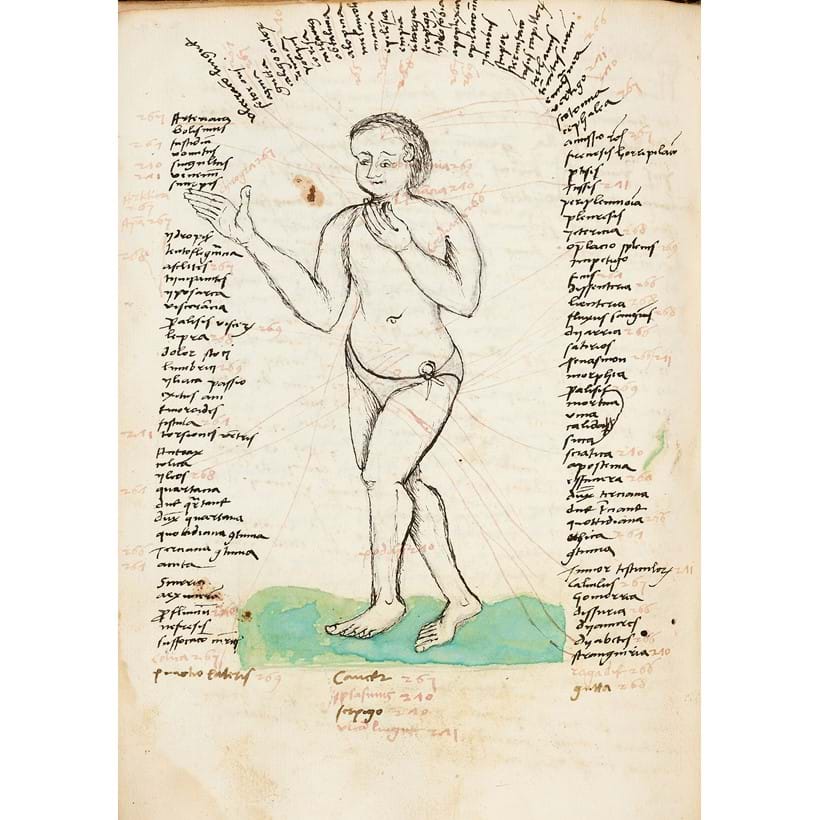 What is fascinating here is that our copyist seems to have had access to multiple early editions, and to be comparing and taking from them equally. His text is closest to that of the 1500 edition, but has been truncated and given minor adaptations in many places. However, while his figures of the 'wound man' and the 'phlebotomy man' have exposed genitals, the figure on original fol. 264v has a loincloth added showing the copyist's debt to the more coy 1495 issue and their so-called 'speedo diagrams'. Finally, the complete absence of the frontispiece or any of the narrative scenes showing the surgeon inspecting urine or similar (which were all added to the 1493 edition) may indicate an attempt to preserve the simplicity of the diagrams of the original printing.

Early editions of the work are rare even in printed format.