Bloomsbury Auctions is proud to be the only auction house in the world to have regular dedicated sales of Western Manuscripts and Miniatures. The present sale spans one hundred lots and a millennium of the history of writing and book production.

The auction showcases examples of breathtakingly rare Classical Roman texts, newly discovered fragments from long-lost monastic libraries, large and elegant codices from ecclesiastical and grand secular libraries, a collection of prophesies concerning the coming of the Beast and the end of the world (lot 80), an exquisite Book of Hours produced for an Italian ecclesiastic who briefly became the bishop of Bergen in Norway (lot 86), and a handbook in medieval English explaining to women how to be an anchoress (lot 75) – a form of hermit who was walled up in a cupboard-sized opening in a church wall for the remainder of their life, to only have contact with the outside world through tiny peepholes and slots intended to exchange food and waste through.

Among the many gems in this sale is a large and handsome codex of the commentaries of an English fourteenth-century philosopher, Walter of Burley, of Aristotle’s De Physica, here in a copy dated 1435/9 with a noble Italian provenance (lot 77).

The changing popularity of the works of Aristotle in the West, perhaps more than any other, illustrates the great sea changes of interest in secular Classical works during the collapse of the Roman Empire, the Dark Ages and the renaissance of learning that followed the Crusades and the foundation of scholarly translation-schools in Spain and Sicily.

What is of particular note here is that this commentary is by an English medieval theologian, Walter Burley (or Burleigh; c. 1275-1344/5), one of the most prominent and influential philosophers of the fourteenth century. 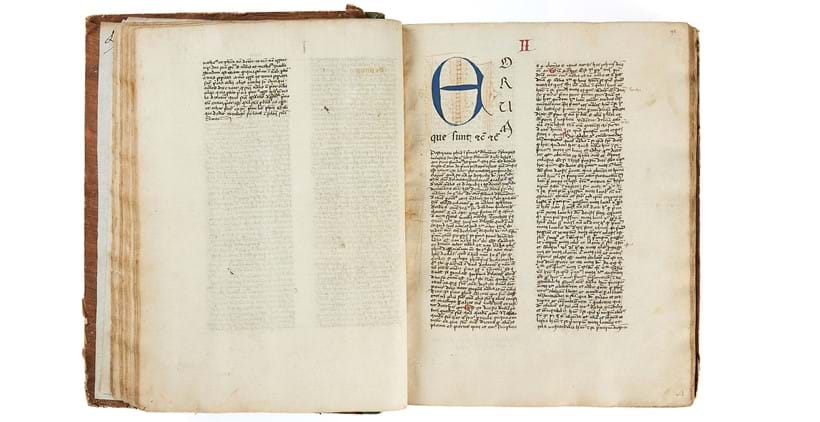 A fifteenth-century copy of a history of the Ancient World in Italian, Guido da Pisa’s, La Fiorita d’Italia, which frequently cites Dante Alighieri’s Divina commedia, perhaps the most important literary work of the Middle Ages, and the only copy to come to the open market since 1871 (lot 79).

Little is known about the author of this important early Italian work. He was a native of Pisa and reveals in his work that he was a Carmelite Friar. He composed it sometime between 1321 and 1337, and despite a modest description of it by the author as some memorable facts and sayings of the ancients, it is in fact a chronicle of the Biblical and Ancient World, designed to show how that developed into civilised Christian society. 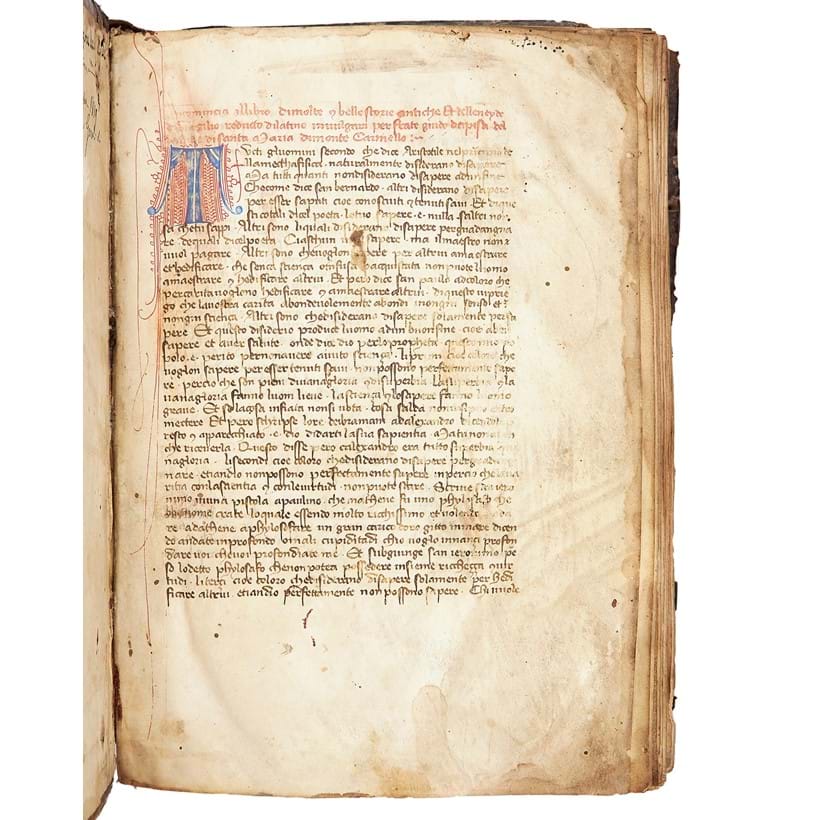 A fragment of a text by Hildegard of Bingen (d. 1179), a mystic who experienced visions from a young age and rose to be one of the most important female authors – this fragment is probably from her own monastery, perhaps copied by a nun who knew her, and moreover no other manuscript copy of any of her works appears to have come to the market since 1923 (lot 62).

The present text is an explanation of the Athanasian Creed composed for the inmates of her own female monastic community at Rupertsberg. It was written in the 1170s in a period of frenzied writing as she entered her seventies and the community feared they might soon lose her. Lot 62: Large fragment of a leaf from Hildegard of Bingen, Explanatio Symboli Sancti Athanasii, an explanation of the Athanasian Creed, in Latin, decorated manuscript on parchment, in situ on the binding of a sixteenth-century printed book [Germany (perhaps Rupertsberg or Eibingen), late thirteenth or early fourteenth century] | Est. £3,000-5,000 (+fees)